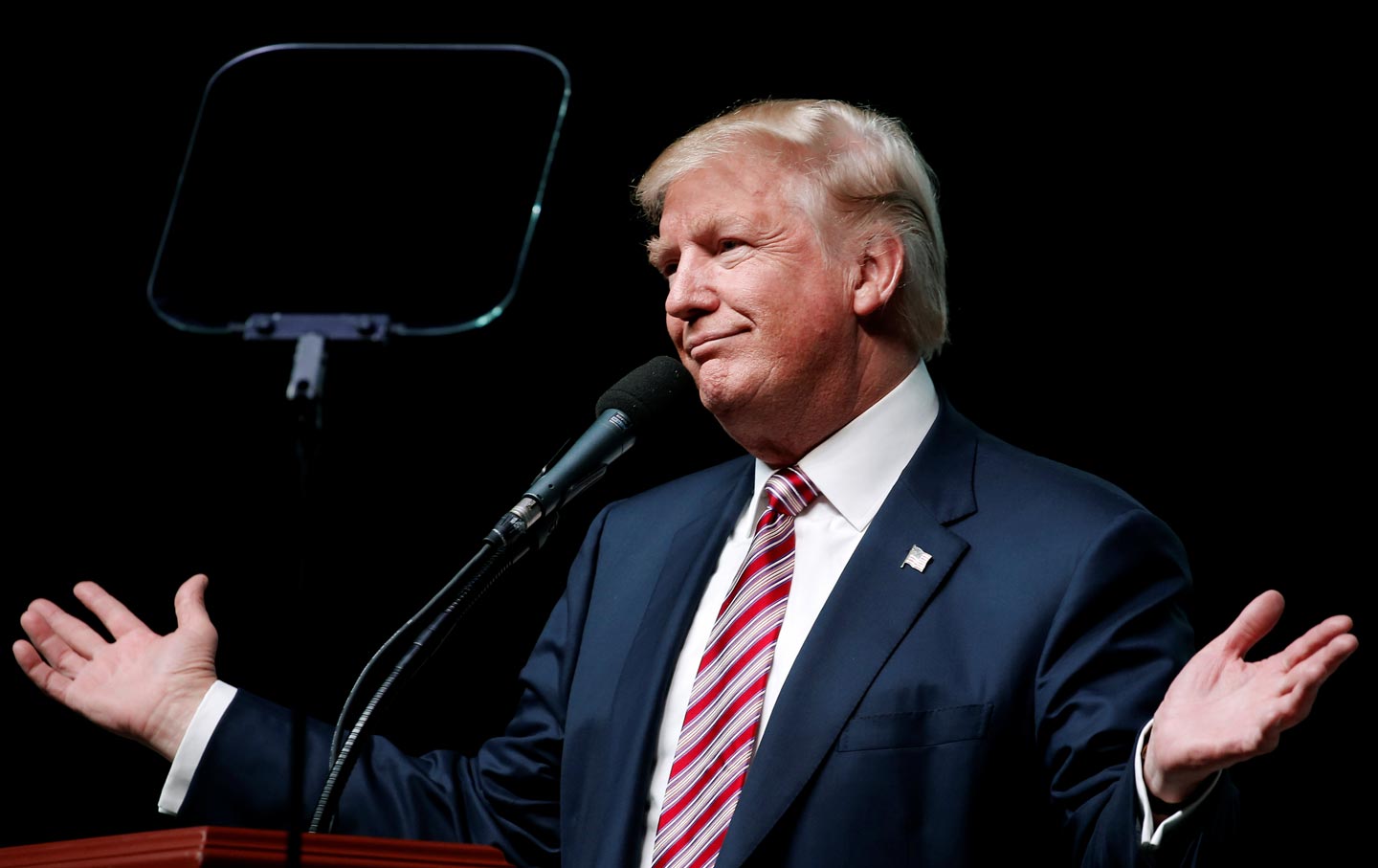 “They’re rapists,” Donald Trump said last year when he announced his presidential candidacy. Back then, he was speaking about Mexican immigrants who had crossed the border into the United States illegally. The claim was not backed by any evidence, nor did it need to be, because its purpose was not to appeal to logic, but to emotion. It’s one of the oldest tricks in the racist’s handbook: to warn that white women are in danger from unknown numbers of dark others and that only a strong male can offer protection. “It’s coming from more than Mexico,” Trump continued, warming to his theme. “It’s coming from South and Latin America, and it’s coming probably—probably—from the Middle East.”

In the 16 months since his announcement, Trump has made dozens of hateful remarks, each more outrageous than the last, without losing the support of the Republican Party’s leaders. He has promised to build a wall to keep out immigrants; proposed a ban on Muslims entering the country; suggested that the US military engage in war crimes; claimed not to know who David Duke was, despite having written an op-ed about the former Ku Klux Klan leader; retweeted anti-Semitic images; dismissed a federal judge’s ability to do his job because of his ethnic heritage; attacked the Gold Star family of a Muslim US Army captain; insisted that the Central Park Five—black and Latino men who were exonerated of rape charges years ago—were guilty; and, until the eve of the first debate, insinuated that the country’s first black president was not really American.

But it was only when Trump—that outspoken defender of women from Mexican rapists—bragged about sexual assault that some of his party’s leaders finally seemed to find the courage to break with him. In a tape obtained by The Washington Post, Trump can be heard telling Access Hollywood’s Billy Bush that he moved on a married woman “like a bitch.” The conversation was recorded in 2005, when the two were on a bus heading to the Days of Our Lives set. Upon seeing the actress who was to host him for the day, Trump said that he needed “to use some Tic Tacs” because he might start kissing her. “I’m automatically attracted to beautiful—I just start kissing them. It’s like a magnet. Just kiss. I don’t even wait. And when you’re a star, they let you do it. You can do anything. Grab them by the pussy. You can do anything.”

It’s fair to say that Trump’s record on women has been consistently horrific. In the past, he’s called Rosie O’Donnell “a slob,” Arianna Huffington “a dog,” Megyn Kelly a “bimbo,” and Alicia Machado, a former Miss Universe, “Miss Piggy.” He has been no less vulgar with his political opponents. “Look at that face,” he said of Carly Fiorina. “Would anyone vote for that?” And he has blamed Hillary Clinton for her husband’s infidelity, incited Russian hackers to find and release her e-mails, and suggested that the “Second Amendment people” could act against her.

This latest incident seems to have struck a nerve, however. After the tapes became public, House Speaker Paul Ryan announced that he would no longer defend Trump or campaign for him; Condoleezza Rice and Carly Fiorina called on him to drop out of the race; and Senators John McCain, Kelly Ayotte, and Dan Sullivan withdrew their endorsements, as did former Governor Tim Pawlenty. Many others have since joined the chorus. But this is not a stance born out of moral necessity.  The decay that’s been growing inside the “party of family values” has been plain for quite some time, and all these Republican leaders have been willing to accommodate it.

No, this is nothing more than a statistical calculation. There is hardly a woman in this country who has not experienced some sort of assault at some point in her life. Hearing Trump speak so casually about the violations he inflicts on women is likely to damage his candidacy in the eyes of a huge portion of the electorate. (Recently, Nate Silver showed that if only women in America voted, Trump would get just 80 votes in the Electoral College.)

Furthermore, Trump’s poll numbers have been falling since his performance in the first debate, where, among other things, he claimed that not paying taxes made him smart and answered a question about cybersecurity by talking about his 10-year-old son’s love of computers. His performance in the second debate wasn’t much better: He characterized his taped comments as mere “locker-room talk” before raising the threat of ISIS in a complete non sequitur. He later threatened Hillary Clinton with jail if he were elected. It was, to borrow one of Trump’s favorite words, a disaster. So it is only the prospect of a resounding electoral defeat that has Republicans suddenly swaddling themselves in virtue and denouncing the despicable behavior of their nominee.

And the way in which they’ve denounced Trump is particularly telling. Here is his running mate, Mike Pence: “As a husband and father, I was offended by the words and actions described by Donald Trump.” Here is Mitch McConnell: “As the father of three daughters, I strongly believe that Trump needs to apologize directly to women and girls everywhere.” Here is Jeb Bush: “As the grandfather to two precious girls, I find that no apology can excuse away Donald Trump’s reprehensible comments.”

Two points are worth making here. The first is that women are not vessels of male honor. Sexual assault ought to be condemned on its own terms, not for its connection to a man’s mother or wife or sister or daughter. The second is that the empathy for women that these Republicans are suddenly finding in their hearts was sorely missing when other groups were being attacked or demeaned or harassed. Immigrants, Mexicans, Muslims: All of these people were thought to be expendable, but now that Trump has risked the votes of the largest section of the electorate, he has become condemnable.