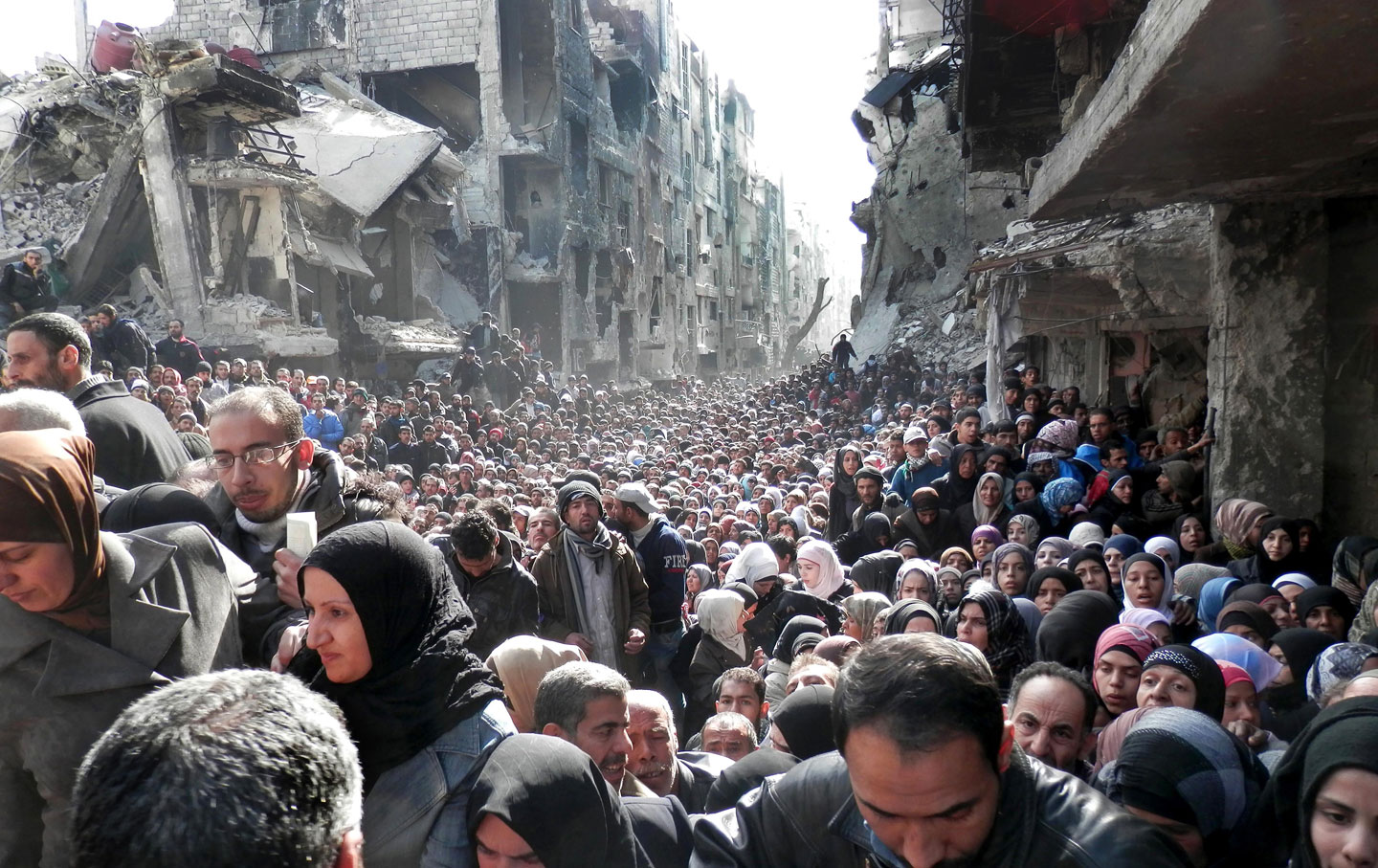 Not long ago, I had a conversation with an official I know from the United Nations Relief and Works Agency for Palestine Refugees in the Near East (UNRWA). The official told me about a conversation he had with a senior Israel Defense Forces officer. In that conversation, my UN colleague asked the IDF official to describe Israel’s policy toward Gaza. The answer was just seven words long: “No development, no prosperity, no humanitarian crisis,” by now a common refrain within Israel’s military and political establishment.

As shocking as this statement is, it offers a remarkably accurate reflection of Israel’s near 50-year policy in Gaza. While Israel did allow a limited degree of prosperity during the first years of the occupation, it has, nonetheless, aimed to prohibit any form of economic development in the territory—and, hence, the emergence of a Palestinian state. This approach has been especially ruinous for Gaza over the last decade, during which Israel imposed a strangling blockade that eliminated virtually all exports, shrank the manufacturing sector by as much as 60 percent, and reduced Gaza’s GDP by 50 percent, according to the World Bank. Israel has further launched three major military assaults on Gaza since the end of 2008—the latest and largest of them last summer (Operation Protective Edge)—leveling neighborhoods, destroying infrastructure, and inflicting immeasurable damage on the tiny strip and its nearly 2 million inhabitants.

Tragically, what was once considered a lower-middle-income economy (together with the West Bank) has become a land on the verge of economic and humanitarian collapse. According to a May 2015 World Bank report, the unemployment rate in Gaza stands at 43 percent (over 60 percent of Gaza’s youth are unemployed), the highest in the world. Nearly 40 percent live below the poverty line. Clean water is a rarity, with at least 90 percent of Gaza’s supply unfit for human consumption. Electricity is sporadic, available only four to six hours a day, and a properly functioning sewage treatment system no longer exists. No development, no prosperity, indeed.

And now, beneath this unrelieved disaster lies another potential one, which threatens to further destabilize Gaza’s already deepening instability: the decline in funding for UNRWA, the same relief agency for which my UN colleague works and one of the few forces standing between the people of Gaza and unmitigated humanitarian suffering. The situation has become so dire that, in June, the commissioner-general of UNRWA, Pierre Krähenbühl, warned that the agency might have to stop its operations within three months.

UNRWA is now in its 65th year. Established in 1949 by the UN General Assembly following the 1948 Arab-Israeli conflict, UNRWA began operations on May 1, 1950, with a mandate to provide direct relief and public works programs to Palestinians who fled or were forced from their homes. That it continues to exist more than six decades since its inception is a stark illustration of the political failure to find a just solution for the Palestinian refugees. With a staff of around 30,000 (approximately 42 percent of whom work in Gaza), UNRWA provides protection and assistance to 5.2 million Palestinian refugees throughout the Middle East—specifically, in Syria, Jordan, Lebanon, the West Bank, and the Gaza Strip. Its brief includes providing healthcare, education, social services, emergency aid, and infrastructure support. And it does all of this with an annual budget of $1.4 billion.

In Gaza alone, UNRWA serves 1.28 million refugees, 25 percent of the regional total. As such, and in the words of UN Secretary-General Ban Ki-moon, “At a time of turmoil in the region, UNRWA remains a vital stabilizing factor.” In Gaza, it is quite fair to say that UNRWA is the only source of stability and constancy in an otherwise deteriorating environment. In fact, one-seventh of Gaza’s economy, or approximately 14 percent of Gaza’s GDP, can be traced to UNRWA, sources within the organization told me.

Yet, UNRWA faces a severe financial crisis that threatens to curtail (and possibly end) its work throughout the entire region. Currently, UNRWA has a deficit of over $100 million in its General Fund, which pays for its core services such as education and health. UNRWA officials further indicated a deficit of around $230 million in its Emergency Appeal for the Occupied Palestinian Territories, 88 percent of which is for Gaza, and approximately $280 million in its Syria Appeal, both of which provide immediate cash and food aid to people in acute need. Just last week, the agency met in Jordan for an “extraordinary session” to discuss potential responses to the crisis.

In order to reduce costs, UNRWA has had to implement a number of unwelcome initiatives. It suspended its cash subsidy program, which affected 20,000 families in Gaza prior to Operation Protective Edge. In Lebanon, UNRWA will soon suspend its cash-for-rent assistance to Palestinian refugees from Syria. There are also plans to increase the size of UNRWA classrooms from 45 to 50 children and freeze the hiring of teachers and other employees. Furthermore, UNRWA may have to make the tough decision to delay the opening of its 700 schools at the start of the next academic year, which will affect around 500,000 children, half of whom are in the Gaza Strip. So at a time when Daesh and other extremist groups are recruiting, half a million children who should be in UN schools might be on the streets of the Middle East.

Furthermore, according to a senior UNRWA official, if the agency is unable to bridge its deficit by October, it will no longer be able to pay staff salaries, which will be catastrophic. In Gaza alone, where the average household size stood at 6.1 people per family in 2012, as many as 76,250 people could be left without any source of income. What then? Recently, Palestinians in Gaza and Jordan protesting UNRWA cuts threatened the agency with violence, claiming that its programmatic decisions are part of a conspiracy to eliminate the refugee issue. This is one expression of the turmoil and upheaval that will accompany further reductions in UNRWA’s core services.

The problem of chronic underfunding is not new to UNRWA. At its base, it reflects larger political attitudes toward Palestinians, which view them as marginal and unwanted. But in its current incarnation, it derives from several harmful factors. First, while many major donors continue to fund UNRWA and have even increased their contributions, the needs of the agency have risen far more dramatically, given the political exigencies in the region, high population growth rates, and escalating costs. Thus, the gap between the need for protection and what UNRWA can actually deliver has become extreme. The need for major donor countries to increase their contributions beyond what they have already committed is absolutely critical.

In the context of these severe restrictions on UNRWA’s finances, an issue with one donor—Canada—deserves special scrutiny. Canada’s decision to first reduce and then terminate funding to the agency, a decision no other major donor government has taken, has been extremely injurious to the agency.

In 2010, Canada’s contribution decreased again to around $15 million, where it remained for two more years with most, and subsequently all, of the funds for the Emergency Appeal. Beginning in 2013, Canada, apparently without any prior warning, terminated all funding to UNRWA.

The loss of $28 million from Canada constitutes the largest single loss to the agency, which it cannot replace, and has been “desperately damaging” in the words of one UNRWA official, contributing substantially to UNRWA’s current deficit in the General Fund. What is most outrageous, however, is Canada’s decision to terminate its $15 million contribution to the Emergency Appeal; in so doing, the Canadian government is refusing to provide food for impoverished Palestinians, the majority in Gaza.

A third factor hurting UNRWA’s finances is the decline of the euro. Since most of UNRWA’s contributions are donated in euros, the currency devaluation has resulted in a loss of $20-25 million over the last year. Additionally, in 2014 UNRWA spent $7.5 million just to bring materials into Gaza, a direct result of Israel’s draconian packaging and import regime.  These same monies could be used to build four schools for Gazan children, which is vital given that UNRWA needs to build seven schools per year in Gaza just to keep pace with the increased school-age population.

The crisis facing UNRWA also reflects a wider global problem, in which burgeoning need now exceeds existing resources. Not since World War II has the number of people exiled from their homes been so high, with nearly 60 million people who are refugees, internally displaced, or seeking asylum—one in every 122 people in the world. Yet the lack of resources is just one part of the crisis facing the humanitarian system; the inability to resolve political conflicts is the other. Furthermore, in the absence of political solutions, humanitarian aid has often become instrumentalized—that is, used to manage and manipulate political problems—as it has in Israel’s relationship with Gaza.

In Gaza, dependence, debility, and dread have become the occupier’s politics of choice. Development, however constrained and limited, no longer has any role. The reasons are many, including the fact that donors do not want to see their projects destroyed in future conflicts. But the net result is that Gaza is condemned to relief, not progress, which is exactly what Israeli policy seeks, as stated so clearly by the IDF officer quoted at the outset.

"With Palestinians, we've reached a policy of…agreeing not to envision solutions."

Within this context, writes a UN colleague, assistance has increasingly become “the management of troublesome populations at the edge of perpetual conflicts…. with Palestinians, we’ve reached a policy of not solving, a policy of agreeing not to envision solutions. This does not feel like an oversight. It seems like a choice. The management of inconvenient populations with no vision of anything but further management.”

Still, if relief is not an adequate response, it is nonetheless a necessary one, and a further reduction of UNRWA services (let alone their suspension or termination) will only deepen the sense of despair and abandonment already so powerful among Palestinian refugees wherever they reside. The political consequences of watching one’s children go hungry are clear. Who among us would endure such pain in silence?