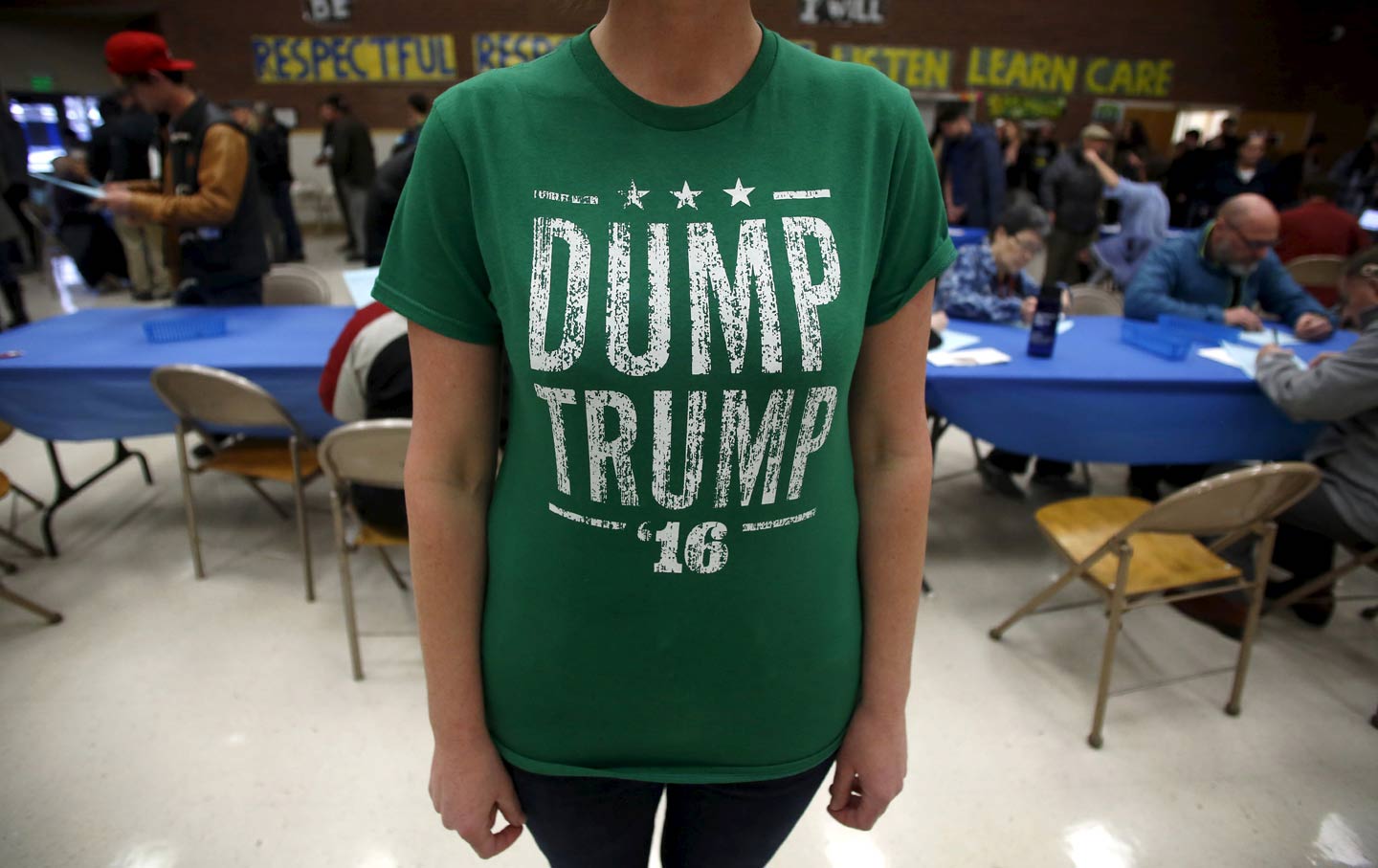 After the news broke on Friday about Donald Trump’s boasting on tape of sexual assault, the first politicians to withdraw their endorsements of Trump and call on him to abandon the race were Mormons. Over the weekend, the chorus grew among Republicans of other religions—but many of these later calls for Trump to withdraw came from candidates facing strong Democratic opposition, like New Hampshire’s Senator Kelly Ayotte. Others were party leaders concerned about the political effect on down-ticket races, like Senator John Thune of South Dakota, chairman of the Republican conference. The Mormon politicians, in contrast, all come from totally safe Republican districts and were not acting out of political expediency or fear. Why was it Mormons, and not evangelical Protestants or Catholics, who went first and took a principled stand against Trump’s boasts about being a sexual predator?1

The first Mormon politicians to call on Trump to withdraw were all from Utah: Senator Mike Lee, Representative Chris Stewart and former Governor Jon Huntsman. Utah Governor Gary Herbert and Representative Jason Chaffetz were the first after The Washington Post’s revelations to say they would not vote for Trump. The next day they were joined by other Mormon Republicans in Congress, Idaho Senator Mike Crapo and Utah Representative Mia Love. And of course some Mormon leaders had always refused to endorse Trump, long before these latest reports—notably Mitt Romney and Arizona Senator Jeff Flake.2

In contrast, prominent evangelical Protestants like Texas Senator Ted Cruz and VP candidate Mike Pence—who famously says, “I’m a Christian, a conservative and a Republican, in that order”—are sticking with Trump. Of course, they objected to the statements on the tape; Ted Cruz called Trump’s comments “crude and inappropriate,” but then tweeted that it was time to “move along” to Hillary’s problems. The Mormons are not moving along; instead, they have drawn a line and are refusing to cross it.3

“Trump’s Mormon Problem” was noted long before his groping tape surfaced. In a mid-September poll in Utah, he got only 34 percent, which the Salt Lake City Tribune called “an abysmal number for a Republican in one of the most conservative states in the nation.” In 2012 Mitt Romney got 73 percent. 4

It’s not hard to see why Trump was doing so poorly. The Mormon Church itself condemned his remarks on Muslims. “The Church of Jesus Christ of Latter-day Saints [LDS] is neutral in regard to party politics and election campaigns,” an official statement declared back in December. “However it is not neutral in relation to religious freedom.” Mormons know their history, which helps explain why they rejected Trump’s call for a ban on Muslim immigration. “Early Latter-day Saints spent much of the mid-19th century being chased into the desert by bigots and demagogues,” McKay Coppins wrote in a New York Times op-ed. “Propagandists painted them as a nefarious foreign race.” And, in a striking anticipation of this year’s politics, the secretary of state in 1879 proposed restricting Mormon immigration to the United States, on the grounds that the nation had to be protected from “prospective lawbreakers.” That history is a prime reason the LDS announced an immigration relief effort in April. “Their story is our story,” Elder Patrick Kearon said, “not that many years ago.”5

It wasn’t just Trump’s call for a government religious test that provoked Mormon opposition. Mormons also objected to his isolationism. Mormon men (and women) are encouraged to do missionary work, many in faraway parts of the world, so Mormons are familiar with the wide world and see it as a place to which they are connected. And Trump’s promise to “make America great again” doesn’t resonate in Mormon America at all. Mormon areas are prosperous and growing, and Mormons have higher educational levels, higher incomes, and more stable families than most of evangelical America. Most Mormons are not downwardly mobile angry white men.6

But while those aspects of Trump’s politics turned many Mormon voters against him during the primary season—Trump got only 14 percent in the Utah caucuses (Ted Cruz got 69 percent)—most of the Republican elected leaders who were Mormons endorsed him once he got the nomination. Why did the groping tape mark the point of no return for them, when his position on banning Muslim immigration and his isolationism didn’t?7

The Mormon Church is rigidly patriarchal. Women are not allowed to be priests, and the church teaches that “fathers are to preside over their families.” But patriarchy everywhere involves an obligation for men to protect women. Mormon men in politics seem to take patriarchy more seriously than evangelicals, at least the part about men’s obligation to protect women—which includes protecting them from aggressive sexual predators like Donald Trump.8

And there’s also a theological dimension to Mormon politicians’ rejection of Trump after his boasts of sexual predation. “In Mormon theology, women are essential to men’s salvation and spiritual progression,” says Judith Freeman, author of new memoir The Latter Days about growing up Mormon in the Utah of the 1950s and ’60s. “I’m not sure that same sensibility exists in the evangelical world. In order for a Mormon man to attain the highest celestial realm, he has to have a family with a wife who is a spiritual partner. Mormon men are taught to protect, revere, honor, and almost worship women as mothers and latter-day saints. That’s why Trump’s debasement of women became such a problem for the Mormon politicians.” 9

There are, of course, some Mormon elected officials who have not turned against Trump. The most prominent is Utah Senator Orrin Hatch, who criticized Trump’s recorded statements but said he would still vote for him. Hatch has been a Washington insider for a long time—maybe too long. (He was first elected to the Senate in 1976—40 years ago, making him the second-longest-serving senator this term.)10

The big political question, of course, is whether Mormons’ revulsion over Trump gives Hillary Clinton a chance in Utah. The obstacles are massive: Mormons are the most Republican religious group in America—70 percent Republican and only 20 percent Democratic. That mid-September poll put Clinton at 25 percent in Utah. As for the rest, Libertarian candidate Gary Johnson got 13 percent, with 12 percent for independent conservative Evan McMullin, a Mormon who has based his campaign in Utah. Eight percent said they intended to write in a name.11

But there are reasons for Hillary to be optimistic. Salt Lake City this year elected a lesbian woman Democrat—Jackie Biskupski—as mayor, something that would have been unthinkable until recently. In the ’50s and ’60s Salt Lake City was probably 90 percent Mormon; now Mormons are no longer a majority in the state’s largest city. Statewide, only 63 percent of people in Utah are members of the LDS, and, according to a Pew study, only about 40–50 percent were active members. And of course Utah is also 14 percent Latino, 3 percent Asian, and 2 percent black—all hugely Democratic groups, especially this year.12

“I have the feeling there are a number of Mormon women who would like to see a woman in the White House,” Judith Freeman says. “And the entire Mormon population has become more sophisticated than in the ’50s. There are many educated and more progressive Mormons who would vote Democratic.” 13

That’s why, on September 20, the Clinton campaign announced the formation of “Mormons for Hillary.” The group started with 120 members, including some lifelong Republicans. The Deseret News, owned by the LDS, ran an op-ed by Hillary, “What I Have in Common with Mormons.” In the piece, Hillary cited Trump’s Muslim ban and compared it to the history of persecution of Mormons. She also praised the state’s Republican governor for “setting a compassionate example and welcoming Syrian refugees fleeing religious persecution and terrorism.”14

Even before the story broke about Trump’s sexual groping, he himself acknowledged a “tremendous problem in Utah.” That “problem” is now much more “tremendous”—because of the principled rejection of Trump by Mormon political leaders.15

Correction: An earlier version of this article stated that today “Mormons are barely a majority” in Salt Lake City. In fact, Mormons are no longer a majority in the city.