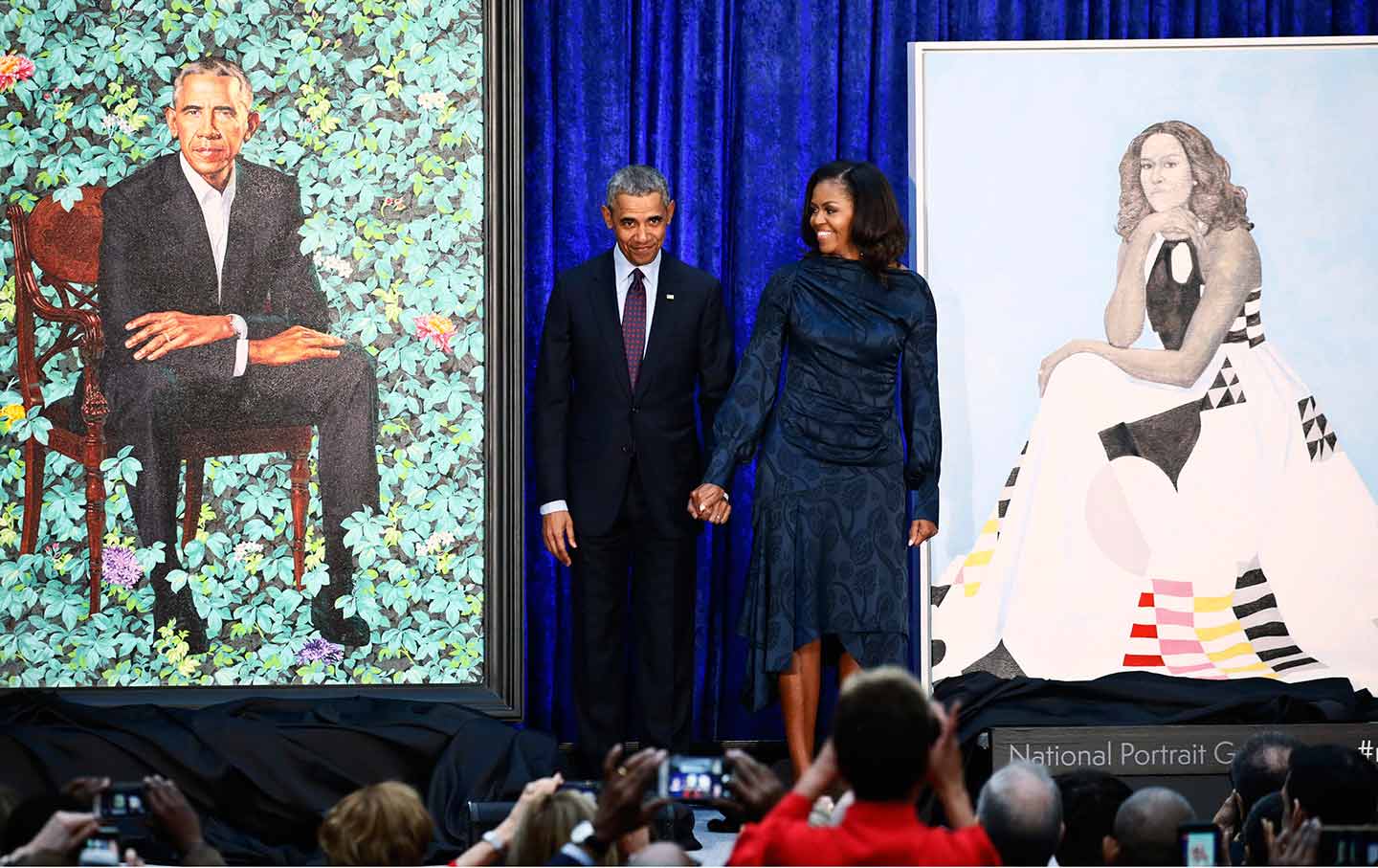 On Monday, the country witnessed another historic first for the Obama presidency—portraits. The unveiling of the official portraits of our former president, Barack Obama, and former first lady, Michelle Obama, marked the first time a black presidential couple will live in the Smithsonian’s National Portrait Gallery. And it’s also the first time two black artists—Kehinde Wiley for the president and Amy Sherald for the first lady—were commissioned to paint the official portraits of a president and first lady for the gallery.

Most years, the presidential portrait unveiling goes by without much notice, but not this time. The Internet was ablaze with analysis, commentary, excitement and, of course, criticism. To parse the meaning behind this moment and the art itself, The Nation spoke with Rujeko Hockley, an assistant curator at The Whitney who knows both of the artists personally. This interview was edited and condensed for clarity.

The Nation: It’s not like presidential portraits are a new thing. Tell me about why these portraits have garnered such a response.

You’re right, what happened today is standard—every president and first lady has had a portrait done. Two, in fact: There’s also one that goes in the White House, which will be in the more traditional portraiture genre. So this happens for every administration. But I think because of who the Obamas are, because of their singular, unprecedented role in American history and because of the complementary singular, unprecedented nature of the artists they chose, this is a big deal. And there was also this familial “we made it!” part of the unveiling, which accompanies a lot of black achievement, of people of color achievement, just because they are the first. It’s crazy that it’s 2018 and we’ve had 44 presidents and however many first ladies and there are plenty of artists [of color] who could have done it in the past—it’s not like suddenly these people exist, these people have existed in all the earlier generations of people—but we finally got our chance. And that’s why we’re hype, if you will.

What does it mean that the Obamas chose Wiley and Sherald?

Well, you dont commission something from a specific person who has a very long track record of working in a specific way and then tell them to do something totally different than what they do. If you wanted something different you’d ask for someone different. I read somewhere that they reviewed dozens of artist portfolios and so I think this was a purposeful choice they made. I can’t, obviously, intuit their personal reasons, but it’s clear they wanted the style of these artists, otherwise they would have chosen different artists. Consequently, it makes sense that the portraits we have are very emblematic of both artists’ styles.

It’s kind of amazing to think that [these portraits] will be living next to the other portraits of all of the other presidents and first ladies—the comparison is stark when you look at the past artists. I think it’s amazing that they’re going to live in that context, but you could take them both out of the National Portrait Gallery and put them in a retrospective of either of these two artists 50 years from now and they would fit perfectly there too.

What about Wiley and Sherald: How would you describe their artistry?

I worked on a show called A New Republic, which was a mid-career survey show for Kehinde. The thing you see in the Obama portrait that connect most strongly to his style is the ornate background. I love in the Obama portrait the places where the foliage pushes through the background, and there are places where it comes in front of the chair, in front of his leg. I love those moments where the background is exceeding its place. There are also places where you see—and this is a long tradition in art history, especially the tradition Kehinde has drawn from, European portraiture of the 18th and 19th centuries—where there are icons, things that are stand-ins for other things. So in the Obama portrait for example, I read that the blue flowers are Kenyan flowers, which allude to his father’s place of birth. There’s the state flower of Hawaii, and there’s a flower that connects to Chicago where he met Michelle and his political career started.There are these hidden and embedded clues that create a larger picture of who Obama is.

What contrasts this portrait from ones he’s done before is he generally features black and brown people who are not famous. He does a process called street casting where, akin to model casting, he asks, “Hey do you want to be in this painting?” Then he says, “This is the image in this art history book, I want to put you where this guy is on this horse in your own clothes,” so you see a lot of young people in contemporary clothing in his work, pictured in these iconic works of art history—prompting us to think about what it means to see black and brown people, what does it mean to see regular people in these portraits?

Because regular people don’t get portraits, then or now! Michelle mentioned this when she said on Instagram, “Nobody in my family has ever had a portrait.”

Kehinde has done recognizable figures in the past, but this is one of very few where the person is instantly recognizable, and its not based on another work of art history. I think he worked in a different way. A lot of Kehinde’s portraits are super bombastic, the person is so puffed up, in an amazing way, imperious and confidently assume this role like “I am here and you are going to pay attention to me.” With [Obama’s portrait] it’s a quieter power: He looks super thoughtful, he looks like he’s listening to you, he’s leaning towards the viewer. You still get a sense of power, but it’s a different kind of power than the kind that kings or queens of Europe, or early Americans were trying to impart. It’s a different kind of vision of what it means to be a leader.

Wiley and Sherald oftentimes paint black subjects. What do you think it says about the Obamas that they chose to use those two artists?

I think the Obamas are the masters of subtle but deeply meaningful gestures. Think about Michelle Obama’s connection to fashion, the way she knew that “What I wear will be seen, will be replicated and copied, and so what I do I has ripples, so what can I do every day?” From the outside, I really feel like both of them thought keenly and deeply, throughout their time in the White House, about the symbolic nature of everything they do. They realized it’s not soft power but paradigm-shifting power to choose black artists. The Obamas take very seriously the real work of representation. It’s not like the National Gallery is flowing with nonwhite faces: We tend to replicate the myopia and failings of our history, culture, and society in our art and institutions, not out of maliciousness but just because it is.

Some on the Internet, and also a couple of my close friends, are criticizing Sherald’s portrait of Michelle. They’re saying it doesn’t look like Michelle, and they’re not happy about the gray scale. As a curator, what is your response to both of those critiques?

I disagree, but I have a lot of empathy for the people who reacted that way.

Kehinde works in a more photographic, realistic style of portraiture, and so his looks like that.

Amy comes out of a different tradition of portraiture that’s thinking about imaginary portraits, thinking about the psychological, not attached to a one-to-one representation. We [people of color] are very protective, and we’re protective for a reason; there are many many examples of maliciousness. But in this case it’s totally in Amy’s style, if you look at a lot of her other paintings you can see this is of a piece with them: the grayscale skin tone and flat background. She uses a pretty muted palette, even when she’s using bright colors. I know that Amy initially liked gray aesthetically in a formal way, but then started to think about the other implications and ramifications of using it. Very few people are literally black or white, but that’s the language we use. It’s an imprecise language, so when you choose gray, everyone is metaphorically in the middle. People aren’t literally gray, of course, but people aren’t literally white or black either! So, I think there’s an interesting play on the language we use to describe race and the idea of race. Culture is real, community is real, affinity is real, but race as a biological fact is not real.

In terms of the statement “this doesn’t look like her,” again, there’s this expectation of realism, and people often talk about photographic realism; but look at some of the first images of black people, they were taken by anthropologists, by colonizers. The whole conversation about photography and realism, that we can trust the image, that assumption of reality, of something looking like something, well we’re talking about a two-dimensional rendering of a three-dimensional person. It will never be real, it is a representation. It’s subjective.