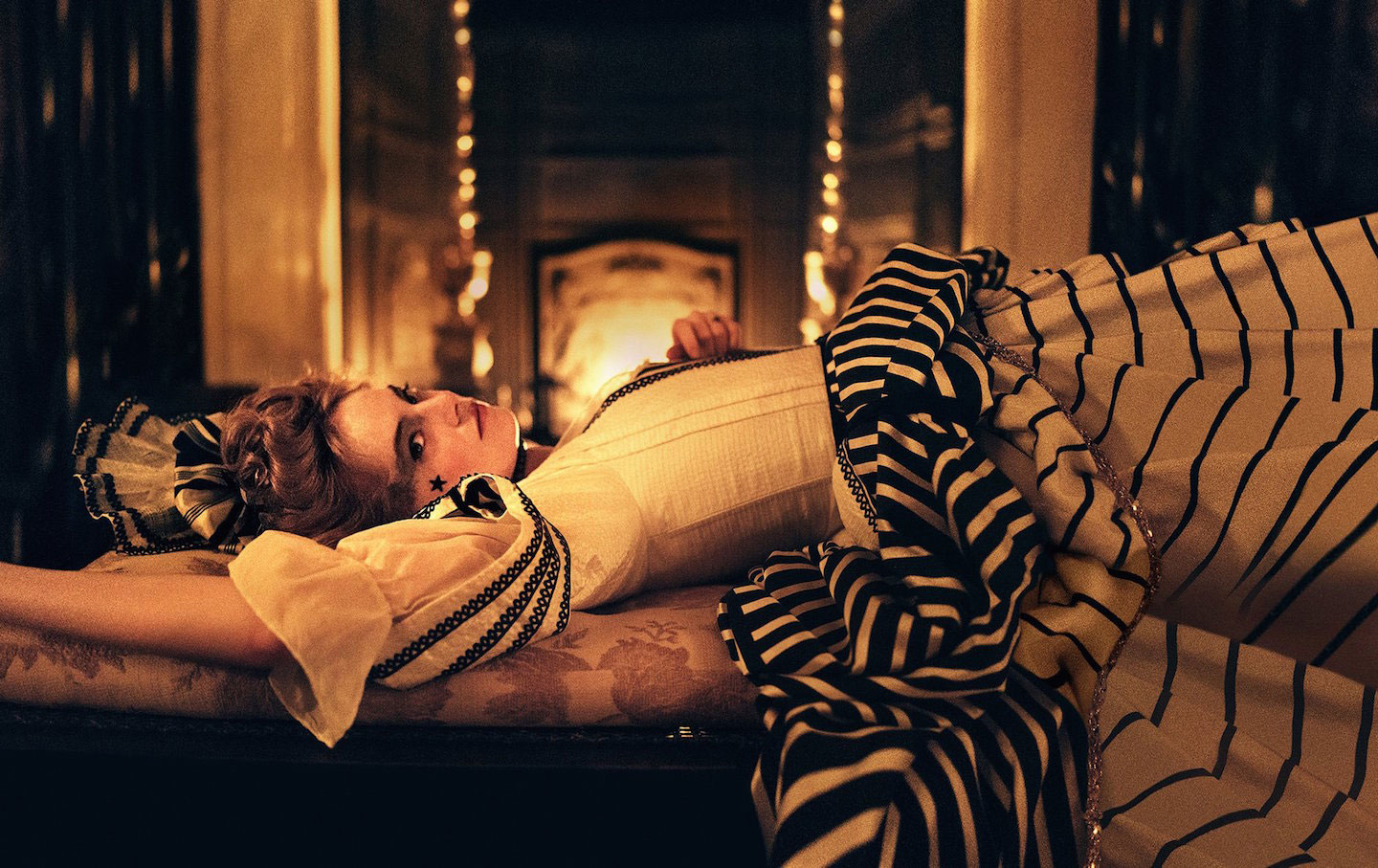 In Yorgos Lanthimos’s films, you may be compelled to laugh at the straight-faced delivery of serious, sometimes brutal declarations. The Greek director’s signature touch is his poker-faced dialogue. In the past, it’s served as an ominously comedic quirk to his social commentary–laced films, which often expose the doldrums of the human condition in cold and sparse worlds, like the claustrophobic domestic drama of 2009’s Dogtooth or the dystopian dating scenario of 2016’s The Lobster. Lanthimos’s latest film, The Favourite, is a lush departure from his usual universes, yet it opens with this trademark deadpan as Rachel Weisz, playing Lady Sarah Churchill, declares flatly and without emotion, “Love has limits.” In this 18th-century England–set tale, Sarah, the Duchess of Marlborough, tells this to Queen Anne (Olivia Colman), to whom she’s become a confidant and lover—someone close enough to influence her political decisions, yet also an unsparingly honest critic of the queen’s gracelessness. “You look like a badger,” Sarah tells Anne in just the next scene, without beating around the bush.

Since The Lobster (also starring Weisz, alongside Colin Farrell), Lanthimos has become a more internationally renowned director, working with A-list Hollywood actors, and moving away from the minimal art-house Greek productions that marked him as a filmmaker-to-know. By 2017, with the Colin Farrell and Nicole Kidman–starring supernatural thriller The Killing of a Sacred Deer, Lanthimos began to utilize a stylish flourish that seemed like the work of a director who had just discovered the Steadicam. In The Favourite, Lanthimos rehashes some of his old tricks—roving cameras and quick pans—but they’re more restrained and fitting to this story of aristocratic tricksters.

Though there’s still a lingual aloofness to the film, it manages to work well with the buttered-up deception and a genuine warmth that’s rarely seen in his work. Perhaps this is in large part due to the screenplay, for the first time not written by Lanthimos himself, but rather by Deborah Davis and Tony McNamara, whose fanciful wit matches the prestige-drama trappings. The Favourite is as layered and delectable as a multi-tiered cake, and though it thematically fits in with the rest of Lanthimos’s filmography, it is also his most intricate and sumptuous work to date.

The queen does indeed look like a silly badger—and even sillier surrounded by her 17 pet rabbits—but underestimate her not. Colman plays Queen Anne as insecure and bumbling, but throughout the film she reveals a depth and ache beyond the gout-ridden legs that have burdened her with a cane and wheelchair. Anne is also in constant want of companionship and affirmation (those 17 pet rabbits are surrogates for the 17 children she’s lost in her lifetime), something Sarah uses to her favor, especially in swaying the queen to raise taxes in order to fund the army that Sarah’s husband, the Duke of Marlborough, is leading against the French.

Lady Sarah is an unrivaled puppet master in the royal court—that is, until her supposedly meek and humble cousin, Abigail (Emma Stone), arrives as a servant. Abigail comes from a noble family too, but was demoted in status due to her father’s gambling addiction. She enters the court covered in mud and shit and trailed by a cloud of flies, and initially is dismissed, but not for long as her scheming gets her in good favor with the queen. She charmingly nudges her way into Sarah’s place as, yes… the favorite. What results is a devilish and salacious battle for the queen’s attention that involves seduction, thinly veiled threats of violence, marrying for power, and Abigail hitting herself in the face with a large book to elicit sympathy from the queen while blaming Sarah for cruelty.

The Favourite is shot extravagantly, and its flashy camerawork is undeniably extra, but it’s in line with the lavish production—from the beautiful Sandy Powell–designed costumes (collaborator of Todd Haynes and Martin Scorsese) to the luxurious, finery draped manses and palaces the characters call home. The cinematography, handled by Robbie Ryan, literally bulges, adding to Colman’s larger-than-life presence as she hobbles across the screen. While there may be one too many fish-eye shots (not even the skateboarding film Mid90s uses this many), this trick among a few others—whiptracking shots, and low-angle close-ups—add a quality of excess fitting for this film. Scenes featuring leisurely duck racing and a dance scene that’s a cross between an Irish jig and dropping it low are made even more fantastical by the dreamlike cinematography.

What sets apart The Favourite most from Lanthimos’s previous features is not so much the time period, but its softer treatment of the human body and its many desires. In his earlier films, there was an intentionally robotic quality to the characters, their bodies used as emotionless, fleshy vessels for the dutiful purpose of sexual fulfillment or temptation. In The Favourite’s first sex scene, the horny, lonely Queen Anne excitedly whispers, “Fuck me,” to Sarah and gets her rocks off in what seems like actually enjoyable intercourse. And even as Sarah manipulates Anne for her own gain, there’s something of real love and pleasure beneath the mind games. Abigail, on the other hand, seems to get off on power itself—something stolen from her, which she feels owed to her and gains back on her own terms. Most important, the women in The Favourite are given the kind of sexual autonomy withheld from Lanthimos’s past female characters.

The men, on the other hand, big-wigged and powdered, can hardly keep up with the women. Abigail catches the eye of a nobleman named Masham (played by Taylor Swift’s beau, Joe Alwyn) and watching them flirt is entertaining (they chase each other like schoolchildren, and Abigail makes allusions to her many kinks). And after using Masham to marry back into nobility, Abigail still prioritizes her personal agenda. Lady Sarah goes through hell and back after a violent incident, and while women “nurse their wounds like wailing newborns” (according to someone at the brothel where Sarah is found and nursed), Sarah remains tight-lipped and proud, refusing to expose her hand even in immense pain. She then returns with a battle scar, and wears a makeshift eye patch for the rest of the film.

As Anne, Colman takes on a traditionally more masculine role. Her power is consequential and magnetic, and men await by her bedside at all hours as she makes political decisions. But it’s more fun watching her at the center of a love triangle often only afforded to older men: Her younger love interest threatens to outshine her older one. And Anne has the kind of power to grant them social mobility in this game of flirtations. Yet the gender politics don’t feel like a contrived effort to flip the script. The Favourite unfolds naturally, even though this is Lanthimos still leaning into his braggadocious tendencies. It works because it feels like the product of its director loosening up—he’s having fun, even when it’s done with a devilish smile.