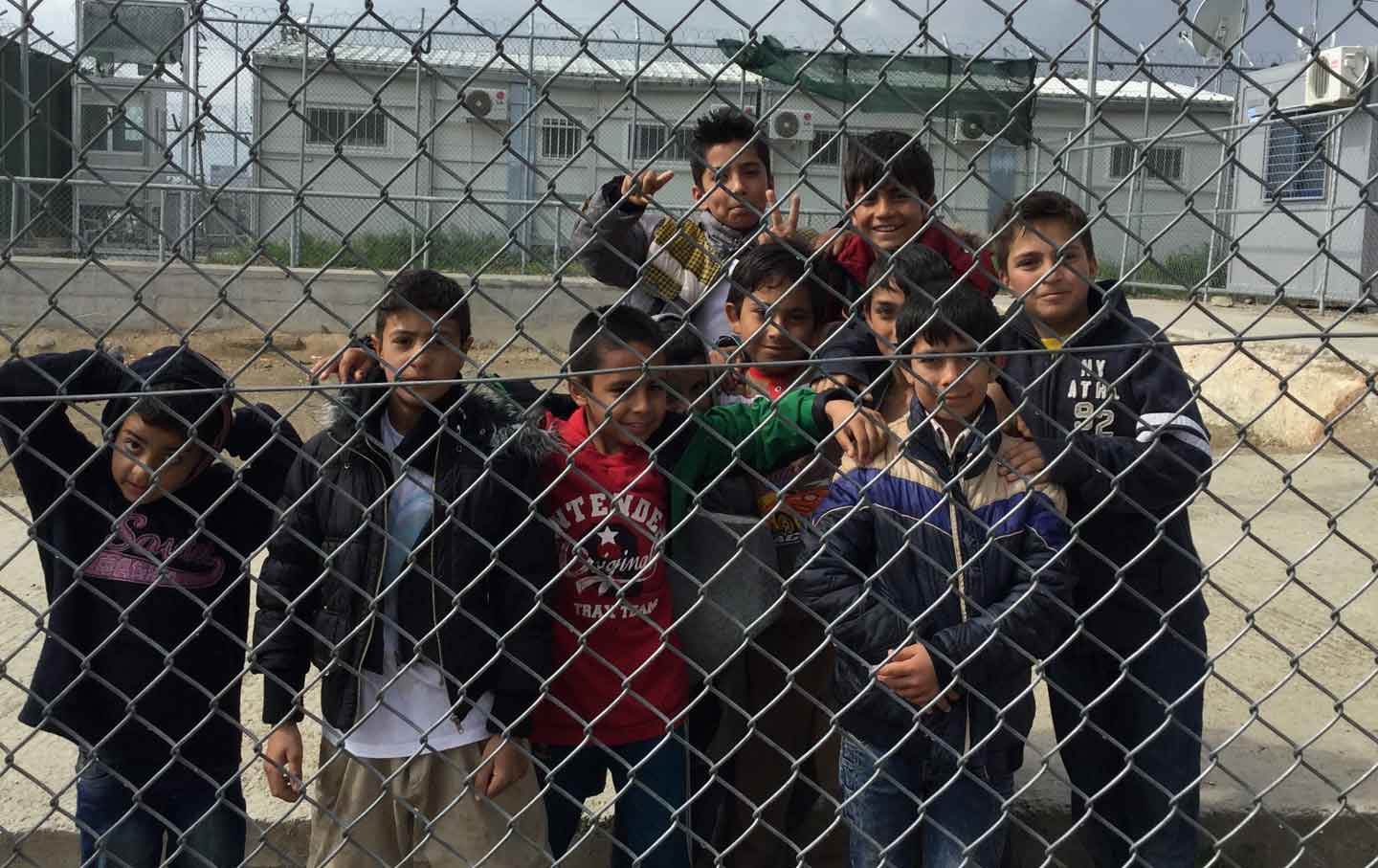 “Chips!” ordered the boy on the other side of the metal fence, pushing a two-euro coin through one of the holes. He looked about 9 or 10. He may have thought I was working for one of the mobile canteens parked nearby, little family enterprises that have mushroomed here recently. But I doubt it. After all, he had clearly seen me getting out of a car with two friends a few minutes before, when he was playing football with two dozen other kids on a sloping cement surface not fit for any sport. It’s more likely that this boy, locked up in the Moria detention center in Lesbos, was teaching me a lesson in dignity: “I am not begging for anything. You are outside, I am inside; I am asking you to cross a road and buy me a packet of chips.”

“Families are taken from here to another, better camp nearby; why only families, and not us?”

“Photo, photo!” another boy insisted when he saw my mobile phone. Several more gathered around him and posed, smiling and making the victory sign. I hadn’t planned to take photos of people, and I hesitated. But this was different. These children were asking to enter into what the artist and cultural theorist Ariella Azoulay has called “the civil contract of photography”: They were offering themselves up as a photographic subject, while my side of the contract was to disseminate the photo to the outside world. They wished to become visible, to be seen, but to be seen smiling, assertive, courageous. They were claiming their agency, understanding only too well the globalizing power of images.

The few young men we spoke to were less keen to be photographed but very keen to talk. “Are you a journalist?” was their first question. “This is a prison. This is Guantánamo,” a man from Afghanistan said to me. “There is a Guantánamo in…Australia, and another one in Greece…. I have not washed my body for 20 days; baths are full of dirty water, up to here” (pointing to his knees). “Food is bad too, and you have to wait for two hours in the queue.” And then he paused. “The pope is coming here,” he said. “Do you hope to see him?” I asked. “Yes,” he said. “I want to.” Reinforcing the fence with razor wire at Moria. The graffiti on the wall says “Close the camps now.” (Yannis Hamilakis)

Further along the fence we met a group who seemed tormented and distraught. “There is a hunger strike inside here,” they told us, and showed us pictures of families in tents next to the fence and small children lying on the ground outside. A Syrian man stressed that there are no lawyers, that no one knows what they are supposed to do: “They fingerprint us, and we do not know what for.… I have been here for 22 days now. A man was hit the other day by the police because he stood in line for food twice.… A few days ago, there was a fight among the detainees, and one was hit on the head with a metal bar. He was taken to hospital and has not come back.”

The man asked my friend what she had studied at university. “I studied English literature too…but then the war started,” he said, as they tried to find each other’s Facebook profile on their phones. “Families are taken from here to another, better camp nearby; why only families, and not us? My twin brother is at the border between Greece and Macedonia, and they are pushing to open the fence.” I thought of his brother that evening when I saw on the news that the refugees at Idomeni were tear-gased and shot at with rubber bullets by the police of the Republic of Macedonia when they attempted, once more, to cross the border.

Little did we know that Lesbos would be at the center of world attention, attracting celebrities—and now the pope.

We drove around the camp toward the main entrance. To our left, the volunteer-run, open solidarity camp “Better Days for Moria” was almost deserted. Before the recent EU-Turkey deal, Moria had been an open facility, and this solidarity camp was where many refugees found support and shelter while waiting to be registered. Now, the security apparatus has taken over, and everybody has to go straight into the detention center, which currently houses around 3,000 people. Two men on stepladders were reinforcing the old barbed wire on top of the fence with brand new razor wire. We stopped to take pictures, and as I got out of the car I stepped on something soft: a child’s cuddly toy, a rabbit with open arms.

We continued our drive along the northeast coast of Lesbos, with the sea to our right. Most solidarity and NGO camps we saw were deserted, except for a few volunteers who were tidying up and packing clothes to be sent to Idomeni. Throughout our drive, a patrol ship from Frontex, the EU’s border agency, kept us company, sailing up and down the narrow passage between Lesbos and the Turkish coast. A refugee boat, shipwrecked off the Molyvos harbor. (Yannis Hamilakis)

I came to Lesbos to attend the “Dialogues in Archaeology” conference, an annual festival of ideas on the links between monuments, material culture, and contemporary society. This year’s theme is “Borders,” chosen more than a year ago, as was the location. Little did we know that Lesbos would be at the center of world attention, attracting Hollywood celebrities, famous artists, and the pope, due to visit this weekend. According to local press reports, in the last couple of days migrants have been rounded up from the town center and the port and transported to various camps in the island’s interior: matter out of place, as anthropologists would say. Meanwhile, 300 out of the 3,000 people locked up in Moria have been selected to eat with the pope and the Greek prime minister.

Our opening plenary at the conference was on “The Archaeology of Forced and Undocumented Migration.” Outside our conference rooms, the island is covered with the scattered material traces of border crossings: boats, some destroyed or shipwrecked close to shore; life jackets of dubious quality; shoes; clothes; small personal items; the remnants of makeshift solidarity camps. These are not recognized by Greek law as archaeological artifacts, worthy of preservation. And yet, they are potent biographical objects that deserve attention and study. Some have already been recycled, others thrown away or destroyed. As the numbers of incoming migrants have decreased— the boats are now intercepted at sea by Frontex and migrants are taken straight to Moria—volunteers and NGO members have taken it upon themselves to clean the beaches. A detailed and systematic archaeology of contemporary migration in the Mediterranean is urgently needed. As the brutal edifice of Moria reminds us, “Fortress Europe” is also producing its own future ruins.

Postscript: We went back to Moria this morning. Walls were cleaned of all graffiti, and many tents of Pakistani and Afghan people were moved out of sight, to the very back. We also received reports of a protest inside the camp, following a decision to deport two Syrian families; two people attempted to commit suicide.