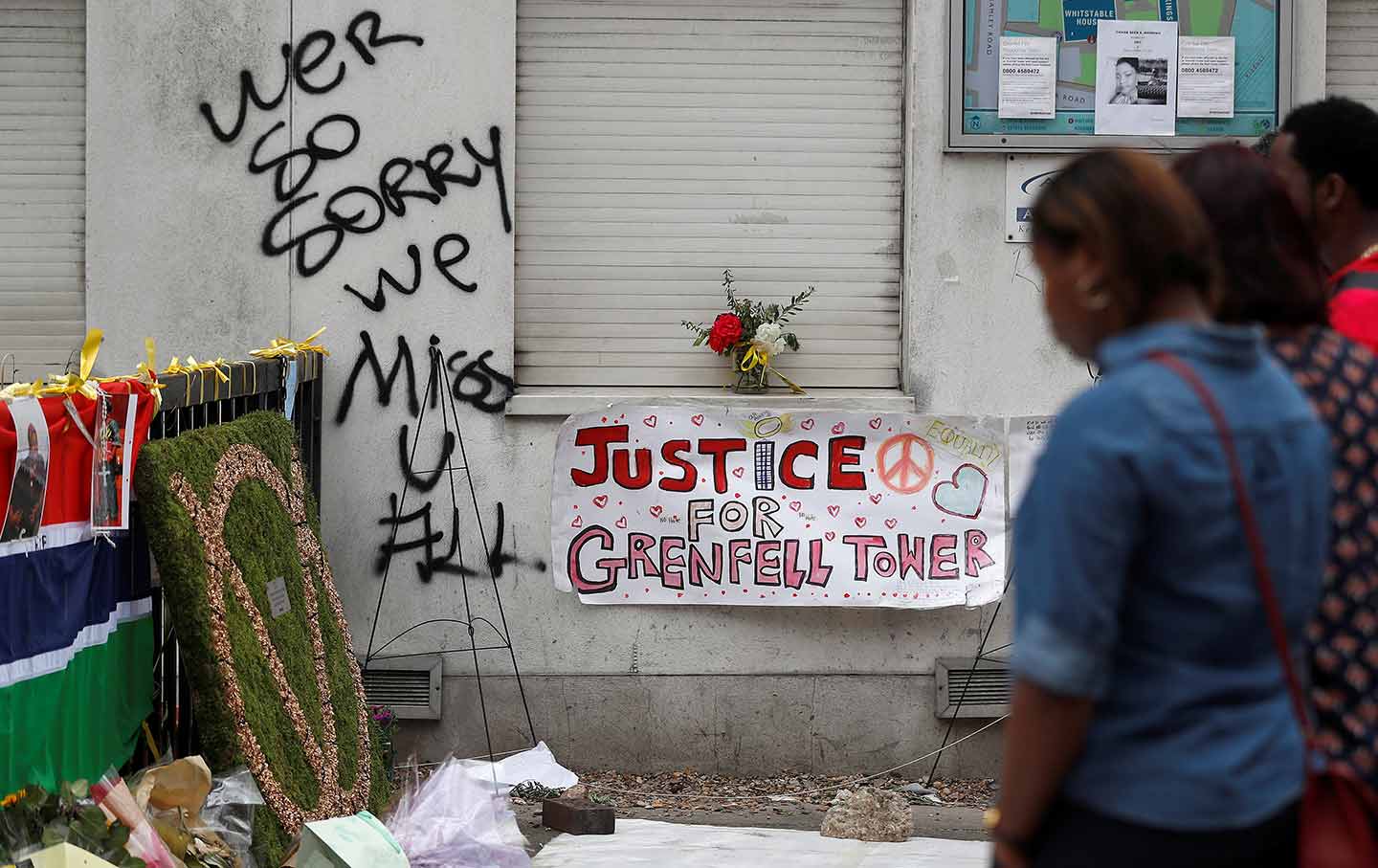 Passers-by look at posters and messages of condolence for the victims of the Grenfell Tower fire in North London, June 25, 2017. (Reuters / Peter Nicholls)

As raging flames consumed the Grenfell Tower housing complex, London’s genteel facade of civility melted away, exposing a hidden human tragedy at its urban core. The immediate cause of the blaze earlier this month was a lack of basic building safeguards, but the underlying tinder was decades of social disinvestment and callous neglect of the poverty and unrest simmering deep inside one of the world’s richest cities.

There will be, in the coming months, much recrimination surrounding the systemic regulatory failures that led to the tragedy. Street marches have unleashed rage at the erosion of working-class neighborhoods’ social services through budget slashing, and the political failures of government ministers to provide essential emergency response and restore community confidence, including identifying the victims. The Guardian has reported that the Tory-controlled council of tony Chelsea and North Kensington had over the years “stockpiled” hundreds of millions in funding reserves in order to subsidize wealthier constituents with tax breaks, even as the authorities simultaneously starved their public-housing budgets.

But however broken the budget, however dilapidated the buildings, the ideological underpinnings of the Grenfell tragedy were solid and rooted in London’s architectural and social history. The city has long practiced a form of modern “urban planning,” now replicated in hyper-developed cities around the world, that embraces structured inequality as social engineering.

According to the design-advocacy network Architects/Designers/Planners for Social Responsibility (ADPSR), the tragedy would have been “completely avoidable if even a small amount of attention had been paid to the residents at Grenfell themselves.”

Council housing like Grenfell has been a longstanding pillar of Britain’s welfare state, shielding working families from the punishing effects of poverty. These housing systems have, when adequately resourced, provided an institution for building dignified, cohesive working-class communities. But through the degradation of public services since the 1980s, from Thatcherite privatization schemes to the current explosion of breakneck gentrification in London, public housing has decayed as the social safety net has disintegrated. Engels’s descriptions of working-class drudgery in the Victorian East End live on today in a softer form in contemporary patterns of segregation and urban unrest.

Yet, absurdly, such a catastrophe tends to shock only when it happens in London instead of, say, on the outskirts of Dhaka, where the 2013 Rana Plaza factory collapse killed more than 1,100 workers through a combination of labor abuse and lack of essential safety infrastructure. Of course, Rana Plaza was a product of a particularly reckless form of development, fueled by international trade and the global manufacturing market. But now privatization and deregulation have brought similar kinds of exploitation and inequality to wealthier Western cities that have abandoned essential welfare systems.

Public agencies in the United States are racing to meet the needs of fossil fuel companies, weapons makers, and Trump family business associates while ignoring the needs of rural communities, distressed urban neighborhoods, and even aging suburbs. UK and US cities represent a global trend of corporate expansion and social polarization. corporate power and increasingly socially polarized.

The Grenfell fire and the social frustration it has unleashed represent the consequences of neglecting one of the last remaining institutions of social protection on the urban landscape. Ultimately, urban housing doesn’t simply become “blighted” or “overcrowded” on its own; tragedies are manufactured when politicians choose to ignore the social needs of the most vulnerable communities.

Worldwide, 1.6 billion people live in substandard housing; another 100 million are homeless. As former UN housing official Miloon Kothari and India-based housing-rights activist Shivani Chaudhry warned: corporate “takeovers” of public space across the globe are “further polarizing society and resulting in a new form of ‘apartheid.’” Contemporary urban apartheid, however, is founded not so much on legalized segregation as it is imposed through a culture of exclusion. Grenfell Tower’s ashes are byproducts of systematic displacement of the poor, that forces disadvantaged communities either into substandard, unlivable shelters, or onto equally hostile streets.

However, by revisiting the mission of public housing, we can start to see buildings like Grenfell as vessels for a new development paradigm, which would give people direct input into the reconstruction of their communities’ ecology by supporting participatory democracy and harnessing public protest in the process of social rebuilding.

The World Charter on the Right to the City, created by designers with a “solidarity-based” urban vision, presents core building blocks of radical social design: shielding residents from the predations of capitalist development through rent controls, and creating eviction moratoriums to rein in landlords who profit from pushing people onto the streets. The Right to the City Alliance is also responding to a global wave of displacement by demanding “The right to land and housing that is free from market speculation and that serves the interests of community building, sustainable economies, and cultural and political space.”

According to Raphael Sperry, director of ADPSR—who noted that prior to the fire, Grenfell was actually undergoing a botched renovation process while the fire safety issues were left unaddressed—the preventable disaster points to the consequences of anti-democratic urban policy:

The lack of community participation in the renovation at Grenfell Towers was both a significant problem in itself—as people have a right to participate in shaping the environment where they live—and a sign of the more immediate danger of a project run with no concern for the basic health, safety, and welfare of the building occupants.

In the US, Sperry observes, “We cannot afford to see our department of Housing and Urban Development, which helps organize and regulate private housing finance and public housing, be run by ideologues and Trump family cronies who know nothing about buildings, safety, urban planning, or public participation. We need to restore government to a system that listens to those most directly impacted by its policies and is responsive to the needs of all citizens.”

But to accomplish a just reconstruction vision requires a planning process that is founded on principles of social inclusion. Simple policy tools can foster the process: rent control laws, land banks, and collective housing ownership, or participatory budgeting and more public design processes. The Grenfell fire is just the latest eruption of historical injustice built into the city’s environment. Yet it could inspire a rights-based approach to rebuilding: the idea that a city of open streets and culture of peace can reorient a crowded world toward a greater good. Progressive form and function go hand in hand.