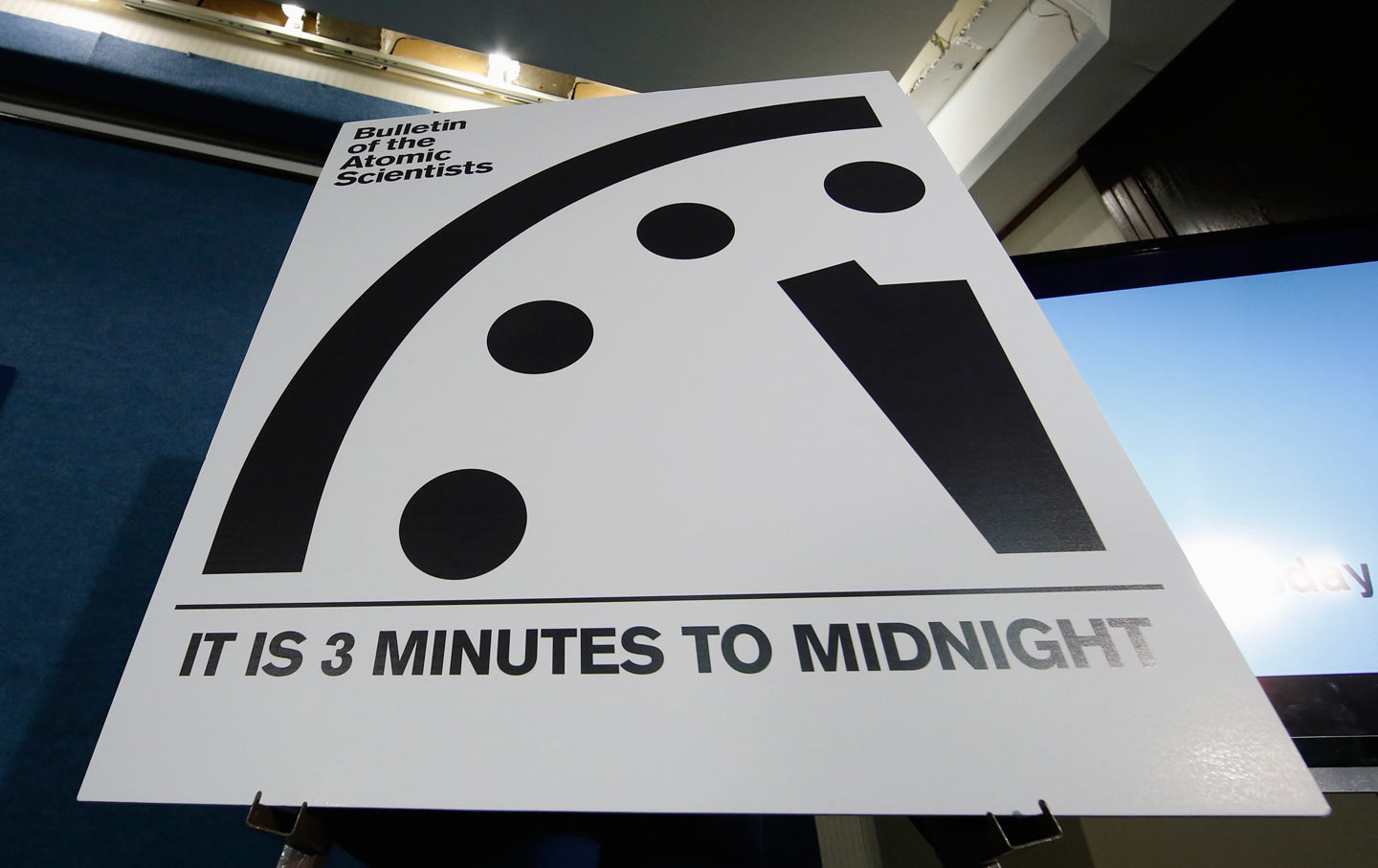 The ‘Doomsday Clock’ that remains at three minutes to midnight is unveiled by the Bulletin of the Atomic Scientists, Tuesday, January 26, 2016, at the National Press Club in Washington. (AP Photo / Alex Brandon)

On September 30, 1971 the United States and the Soviet Union signed the Accidents Measures Agreement in Washington that both recognized, and sought to curtail, the possibility of an accidental nuclear war. The agreement read, in part, that

The very existence of nuclear-weapon systems, even under the most sophisticated command-and-control procedures, obviously is a source of constant concern. Despite the most elaborate precautions, it is conceivable that technical malfunction or human failure, a misinterpreted incident or unauthorized action, could trigger a nuclear disaster or nuclear war.

Did these dangers disappear when the Cold War ended a quarter of a century ago?

On Tuesday, members of the Science and Security Board of the Bulletin of the Atomic Scientists were joined by former secretary of state George Shultz, former secretary of defense William Perry, California Governor Jerry Brown and former UN ambassador Thomas Pickering to announce that the hands of the iconic Doomsday Clock remain set at three minutes to midnight.

The Doomsday Clock was created in 1947 by the Bulletin, in order to help convey to the public the civilizational dangers posed by nuclear weapons. In its 68 years of existence the clock, which was originally set at seven minutes to midnight, has only been adjusted 21 times. Last year, the clock was moved forward to three minutes to midnight, reflecting concerns over the precipitous decline in US-Russian relations and uncertainties related to the then-ongoing nuclear negotiations with Iran. And while a nuclear deal with Iran was indeed achieved in the ensuing year, “on balance,” according to Ambassador Pickering, “tensions are even higher today than they were in 2015.”

The fraught geopolitical environment is certainly not helped by the fact that, as Bulletin board member Sharon Squassoni pointed out, “the machinery of disarmament is getting rusty.” Unlike the robust Cold War–era disarmament dialogue that produced such landmarks as the SALT (1972), ABM (1972), SALT II (1979), INF (1987) and START (1991) treaties, the US-Russia arms control process has seemingly ground to a halt in the years since New START was signed between presidents Obama and Medvedev in 2010. Still worse, there are serious disputes between the two counties over the alleged violations of the INF Treaty, in which both countries pledged to forgo the use of ballistic and cruise missiles with ranges between 500 and 5,500 km.  More recently, Russia has signaled its unwillingness to enter into negotiations over its tactical nuclear-weapons arsenal. Underscoring the current challenges to nuclear non-proliferation, Squassoni noted that China, Pakistan, India, and North Korea have all added to their nuclear weapons stockpiles, while the United States and Russia are spending a combined $350 billion on modernizing their own nuclear arsenals.

Clinton Defense Secretary William Perry pointed out there is a very real danger of an accidental nuclear war between the United Stat,,es and Russia. This is all too true given the fact that NATO, US, and Russian forces are operating in close proximity on the Black Sea, in Ukraine and in the skies over Syria, where, Perry noted, Russian and American forces are operating in the absence of a unified command. This, as Perry put it, is a “disconcerting situation” and in his estimation the likelihood of a nuclear conflagration is “greater than it was during the Cold War, yet our policies do not reflect those dangers.”

Perry noted that the policies the United States has pursued vis-à-vis Russia since the end of the Cold War have helped bring us to our current dilemma. Perry ticked off four policies that have resulted in the alarming deterioration of relations between the two countries: NATO expansion; NATO’s bombing of Serbia in 1995 and 1999; the abandonment of the ABM Treaty in 2002; and the moral and material support the United States has lent to the so-called color revolutions of the former Soviet republics over the past 15 years. Perry’s list is all the more remarkable given that it was the under the Clinton administration many of these polices were developed. Yet given all of this, Perry noted that Putin’s hostility is “easy to understand.”

If the overall geopolitical situation is bad, the panelists noted that the environmental situation is possibly even worse. While the Doomsday Clock is rightfully associated in the public mind with the dangers of nuclear weapons, the Bulletin also takes the dangers of climate change into account. And things are hardly better on that front, even in spite of the Paris climate agreement which was signed by 195 countries last December.

Bulletin board member Sivan Kartha charged that the agreement’s voluntary commitments regarding greenhouse emissions are “manifestly and unequivocally inadequate.” Governor Jerry Brown noted that there is increasing evidence of a link between climate change and political instability, which results in what we witnessed throughout 2015 with the enormous number of migrant workers and refugees from Africa and the Middle East making their way across the Mediterranean and into Europe. As Brown noted climate change is “scientific, it’s economic, but it’s also political.”

According to Brown, the first step in addressing these challenges is to first acknowledge they exist. As of right now, there seems to be scant recognition—particularly by the current crop of Republican presidential candidates—their either nuclear proliferation or climate change are worthy of much attention. Indeed, Brown charged, correctly, that our democratic system is one “that has turned more into spectacle.”

Yet in the end, Brown sounded a much needed note of optimism, noting that as that as long as we continue to try to “change the way we think” about nuclear weapons and climate change then we have the ability to “face the apocalypse and prevent it.”