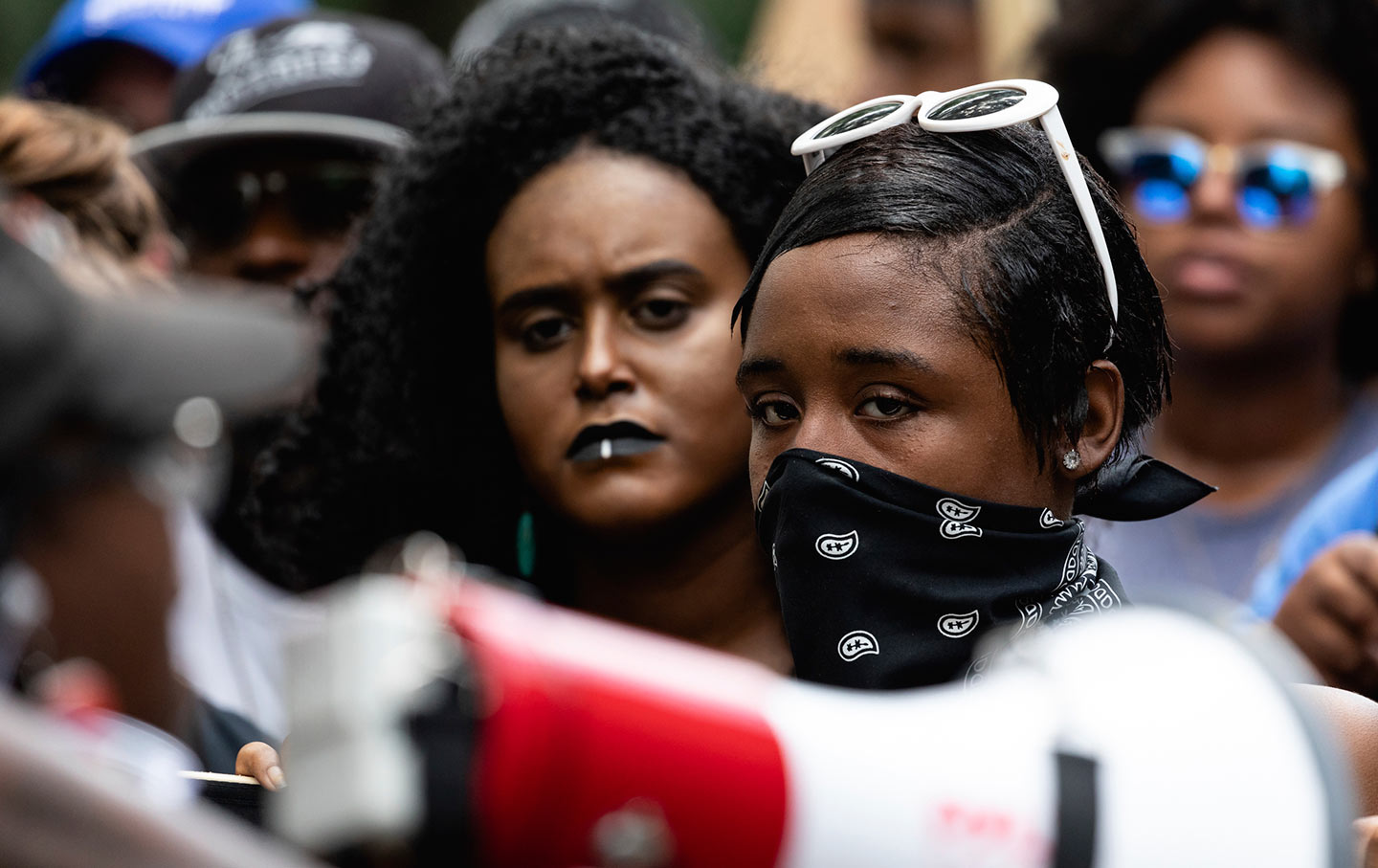 Black Lives Matter protesters in DC demonstrating against the "Unite the Right" rally, August 12, 2018. (Sipa via AP Images / Cheriss May)

Last weekend, leftists and liberals came out in force for the first anniversary of the deadly white-supremacist “Unite the Right” rally, marching, rallying, and protesting in the streets of Charlottesville, Virginia, and Washington, DC.

In DC, where white nationalist Jason Kessler organized a laughable crowd of just a couple dozen far-right racists, several leftist contingents participated in a black bloc—a militant protest tactic associated with anarchists and anti-fascists—to protest his appearance. But as the bloc took the streets in a stand against white supremacy, centrists and liberals in the mainstream press and on the far right admonished the anti-racist activists for allegedly “attacking” journalists. Reports from journalists and anti-fascists who were on the ground in Charlottesville and DC refute these claims, calling them exaggerated or false. Still, the position that anti-fascists are “bad” or dangerous has ramped up as these protesters have been busier during the Trump era than in previous recent years.

On January 21, 2017, millions of people around the country protested Donald Trump’s inauguration thanks to Women’s March, Inc. Replete with permits and police escorts, the march was praised by liberals as a nonviolent show of force against the incoming president. As participants in pink pussy hats took the streets to cheers of onlookers, more than 200 people who’d marched the day before—including activists, journalists, and street medics—were being processed in a Washington, DC, jail. Their crime? They’d participated in the Disrupt J20 actions, which never received the same positive media coverage or recognition that the Women’s March continues to receive even now. Because that march was a black bloc, and some in the bloc broke a few windows, the whole group was written off as “bad” protesters.

For more than a year, the majority of people arrested in the black-bloc march faced felony and misdemeanor charges for property destruction and conspiracy to riot. But because much of the press and many liberals hold a dim view of militant leftism, little attention was paid to a major trial in which the the government tried to send dozens of people to prison for protesting a right-wing presidential inauguration. Some of the defendants pleaded guilty early on and served jail time, while other cases languished in the legal process for over a year, and several groups to went to trial. The prosecution failed to secure any convictions, and any outstanding charges were dropped earlier this summer.

“We saw an effort to widen the definition of ‘riot’ and extend collective liability so that anyone present at a protest could be charged with the criminal acts of others,” says Maggie Ellinger-Locke, the executive vice president of the National Lawyers Guild. The consequences of this legal strategy are far-reaching, and the handling of this case sets a dangerous precedent for attempts to criminalize protest that is (currently) constitutionally protected.

Far-left protesters have long been targets of state repression and abuse, in part because many liberals shun militant actions and urge communities to be “civil” in their resistance. This might explain why there was so little outrage when news came out recently that the Department of Homeland Security and the FBI had slapped a “domestic terrorist” label on anti-fascists and “anarchist extremists.” Attempts to quash “dangerous” leftist activism are often ignored outside their own movements, even though attacks on far-leftists usually signal repression for more mainstream resistance. Legal attacks on anarchists can thus hurt anyone of a marginalized identity. As the old Industrial Workers of the world slogan goes, “An injury to one is an injury to all.”

“Historically, fears of anarchists have been used to suppress any critic of the US government, as well as anyone deemed un-American,” says Adam Quinn, a historian of anarchism and antiradicalism who has written about ideological repression. “Government officials and social conservatives attempted to discredit union members, feminists, immigrants, anti-war activists, political opponents within government, and even the industrialist Henry Ford, as anarchists.”

There are many legitimate ways to protest; some are legal, and some aren’t. This leaves activists who must defend themselves, particularly vulnerable people, in an impossible situation. “Many on the left assert that ‘nonviolence’ is the only morally acceptable way to protest,” Ellinger-Locke says. “As a result, when they see activists resisting the state through methods other than ‘the mass rally’ or the ballot box, they withdraw support. This is incredibly harmful to organic movements.”

Social movements require a diversity of tactics to effectively counter violent state practices. But when an extreme-right-wing government decides what’s acceptable, and by extension, what liberals will support, more disruptive tactics get labeled as “bad.” Leftist activists who act in self-defense against right-wingers, fascists, and police are typically called “violent.” This opens them up to legal charges, harassment, surveillance, and marginalization.

And yet no one can deny that riot cops were brutal during the Ferguson uprising when they used chemical weapons against protesters armed with small rocks (if that). When the Black Lives Matter movement made mainstream news in 2014 following the police killing of Mike Brown in Ferguson, Missoui, the movement faced immediate backlash both from cops in riot gear and the press. One prominent activist in Ferguson, Joshua Williams, is serving an 8-year-sentence for setting a small fire during the protests.

Moderates are keen to promote only passive, nonviolent tactics under any circumstance, but fail to realize that when the police attack demonstrations that kind of resistance isn’t always an option. “To suggest that everyone should just stay calm and submissive amidst chemical weapons and batons is an incredibly privileged perspective,” says Ellinger-Locke. “It ignores the reality faced by demonstrators whose very lives may be at risk.”

This is increasingly chilling for black leftists: Last year, the FBI announced that it would begin targeting “Black Identity Extremists.” According to a leaked FBI report, the US government now classifies virtually any black-rights activism as a “violent threat.” The intentionally vague wording of the report opens any black activist or black person to criminalization if they advocate for their rights. Rakem Balogun, a black activist from Dallas, was one of those under FBI surveillance; he ended up being jailed over Facebook posts that were critical of police brutality.

The popular narratives that painted Black Lives Matter activists as “violent” have since escalated to new legislation targeting black people. Since Trump’s inauguration, lawmakers in 31 states proposed 64 anti-protest bills, some of them geared toward preventing protesters from blocking highways, a common Black Lives Matter protest tactic. Several of these bills proposed making it legal for drivers to run over protesters if they are blocking roads. These bills make formerly legal, even anodyne, forms of protest illegal, and in doing so, target marginalized protesters much more than others.

Water activists in Standing Rock also faced abuse as they took direct action to protect indigenous lands from the Dakota Access Pipeline in 2016 and 2017. The camps set up to resist the pipeline were aggressively surveilled, and activists were attacked by the police with chemical weapons and police dogs. After the camps were forced to almost entirely disband, some of the Standing Rock participants faced felony charges. Then, lawmakers in 30 states introduced more than 50 pieces of anti-protest legislation.

The “bad protester” narrative also lingered in the wake of the deadly fascist attack in Charlottesville, Virginia, last August. James Alex Fields, a member of the fascist cell “Vanguard America,” allegedly rammed a car into a crowd of anti-racist counterprotesters of the “Unite the Right” rally, killing protester Heather Heyer and injuring several others. A number of fascists viciously beat other anti-racists, including DeAndre Harris, but in spite of this violent bigotry, President Trump equated victims such as Heyer and Harris with their far-right attackers, saying there had been “hatred, bigotry, and violence on many sides.” The president also condemned anti-fascists in Charlottesville, referring to them as the “alt-left.”

More recently, the “Unmasking Antifa Act,” drafted by Republicans and submitted to the House Judiciary Committee in June, specifically singles out anti-fascists for wearing masks at demonstrations in order to protect their identities from police and other bad actors. If passed, the bill would make it illegal to “interfere with protected rights while in disguise.”

Given what we know about protest repression, it’s imperative to resist these harmful laws and narratives at all costs, and fight like hell for “bad” protesters. The Republican bill names anti-fascists, but it’s not hard to imagine the vague term “disguise” being applied to any number of garments commonly worn to protests. Maybe even pussy hats.