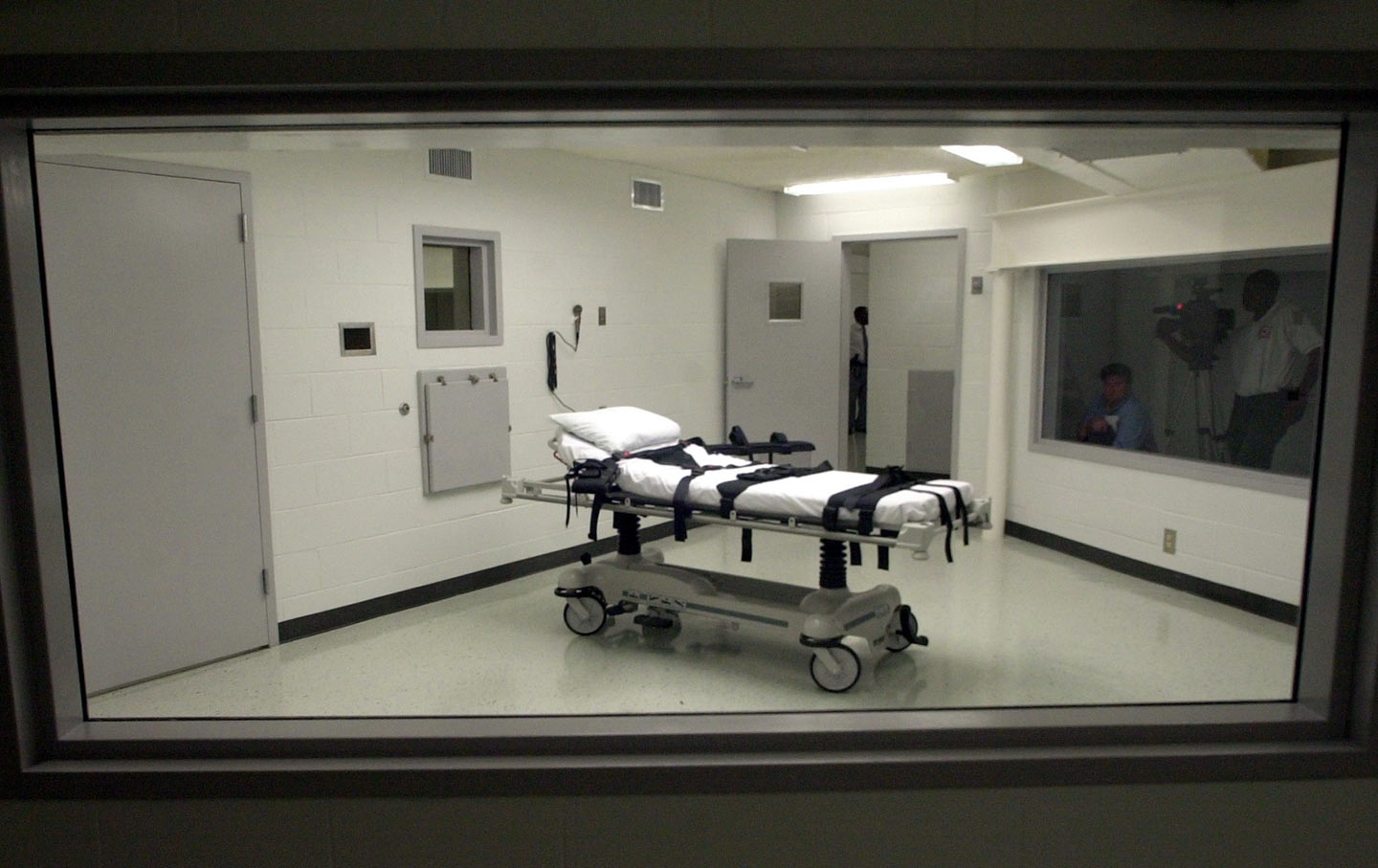 Last Thursday the state of Alabama tried and failed to execute Doyle Lee Hamm, a prisoner who has spent more than half his life on death row for a murder committed in 1987. The botched execution attempt, which lasted hours and left Hamm covered in blood, was one of three lethal injections scheduled in the United States that day. Its gruesome outcome has horrified criminal-justice advocates across the country, who see this execution as yet another blatant violation of the Constitution’s guarantee against cruel and unusual punishment.

According to Hamm’s attorney, Bernard Harcourt, the two-person execution team stuck needles in Hamm’s legs half a dozen times, but were unable to locate a surface-level vein. They then moved on to Hamm’s groin, which they stabbed another half-dozen times. In the process, they may have punctured his bladder and femoral artery—Hamm was gushing blood as the execution proceeded, and he urinated blood for most of the following day, Harcourt reported. At the urging of the state employee who was there, the execution team gave up just before midnight, worried that Hamm’s death warrant would expire.

Harcourt, a Columbia law professor who has represented Hamm since the two men met in 1990, describes the process as “torture,” and there is certainly every indication that the multi-hour execution attempt was cruel, harrowing, and painful. Hamm was “remarkably stoic” and “emotionally mature” as the date of his execution drew nearer, the lawyer said, but when the two men saw each other after the botched execution, Hamm was “traumatized,” shaken up and clearly still in pain.

Hamm’s botched execution is the latest in an expanding list of execution attempts gone horribly wrong (think Clayton Lockett and Joseph Wood, both in 2014, along with many others). But the likely reason for the failure adds a disturbing twist to the tradition. In addition to a history of drug use that makes surface-level vein access difficult, Harcourt says that Hamm has lymphoma, a cancer of the lymph system that causes his nodes to swell, blocking access to veins in his groin. After Hamm was diagnosed in 2014, he underwent radiation therapy to remove a large tumor from behind his left eye, but it is not clear that he received any treatment since. Multiple independent examiners have observed swollen lymph nodes on his body since then.

Well before the date of the execution, Harcourt began pleading with the court to deliver the execution chemicals orally, but the court dismissed his concerns as unfounded. In recent weeks, Harcourt hired Dr. Mark Heath, an anesthesiologist affiliated with New York Presbyterian Hospital, to evaluate Hamm, and he said an execution would be unlikely to succeed. At Harcourt’s request, the court then appointed its own doctor, who noted the inflamed lymph nodes in Hamm’s right groin—the very area the executioners punctured half a dozen times—but concluded that “[they would] not impede venous flow.” One vein in particular, he went so far as to declare, would be a “piece of cake.”

Hamm was originally sentenced to death for shooting a motel clerk in the head during an armed robbery. While he has been imprisoned, Alabama has executed more than fifty people, for many years by means of its infamous electric chair “Yellow Mama” and, more recently, by means of lethal injection. Harcourt has appealed his sentence several times to successively higher courts, and in the process has exposed a number of disturbing facts about the case. When arguing for the death penalty, for instance, prosecutors cited a robbery Hamm supposedly committed while drunk at age 20, but that robbery may never have happened. And in ruling on Hamm’s case in 1999, a judge copied verbatim an 89-page “proposed memorandum opinion” on the case that had been drafted by the Alabama attorney general; in a consummate act of disregard, the judge did not even bother to remove the word “proposed” from the title of the version he signed.

According to Harcourt, Hamm has not been provided with medical attention sufficient to determine how advanced his cancer is or how long he has left to live. His case and his life now hang in legal limbo, awaiting a hearing next week at which the state will announce whether it intends to try again to execute him.

At that hearing, Harcourt hopes to present a medical report that reviews the execution attempt. He confesses he has no idea what will happen next, describing the case as “completely uncharted territory,” but feels confident that it would be unconstitutional for the state to seek another execution given how much warning he gave them about the difficulty of finding a suitable vein.

In the meantime, Hamm’s case will stand as testament to the state’s determination to exercise its monopoly on violence, no matter how impractical, time-consuming, or cruel that exercise becomes.

Recent decades have seen district attorneys in most counties pull away from the death penalty and the Supreme Court limit its use to first-degree murder cases with unanimous juries. A growing body of evidence attests that not only is capital punishment expensive and inhumane; it is also more or less useless: A 2012 review of death penalty studies found no evidence that capital punishment deters crime, and a recent survey of criminologists found that nearly 90 percent of them doubt the death penalty is effective.

Without any practical justification for carrying on this tradition, law-and-order prosecutors and legislators have argued that the death penalty functions as symbolic justice, the only fit way for the state to respond to the worst of crimes. In Hamm’s case, though, this “symbolic justice” involved strapping an infirm, long-incarcerated man to a gurney and stabbing him repeatedly in the groin until he gushed blood. Such torture is certainly symbolic of something, but that something is not justice.