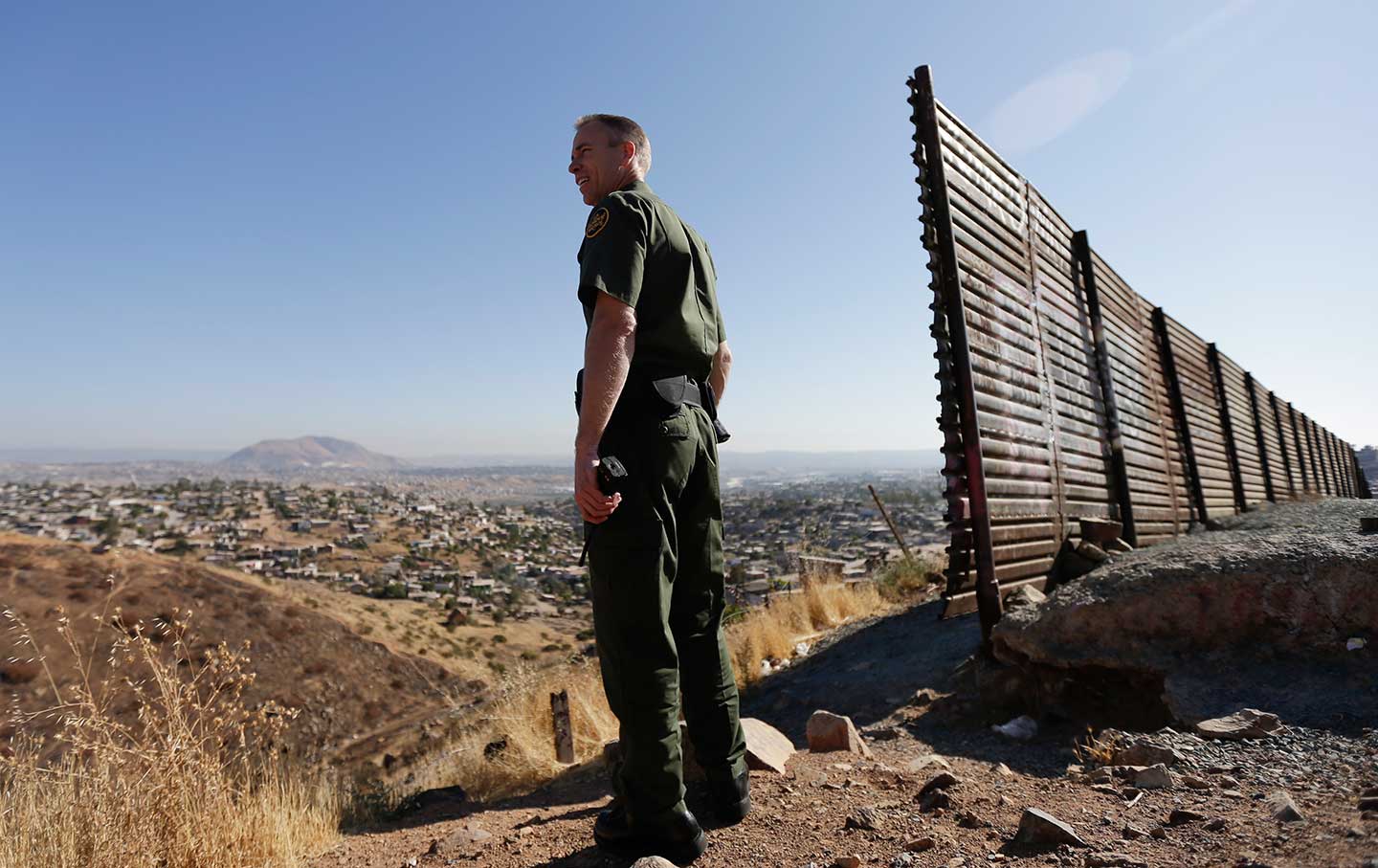 A US Border Patrol agent looks out over Tijuana along the US-Mexico border. (AP Photo / Gregory Bull)

Despite the 35-day partial government shutdown, President Trump is still dead-set on his border wall—and he hasn’t ruled out declaring a national emergency to fund it. In such a scenario, the White House has suggested it would divert money from disaster funds intended to help rebuild places like Puerto Rico, which have faced “natural” disasters in era marked by man-made climate change.

In his 2017 book, Storming the Wall: Climate Change, Migration, and Homeland Security, Todd Miller argues that there is an inextricable link between border militarization and climate change. I spoke with Miller about how borders are expanding, and how the market projections for the homeland-security industry are projected to be significantly larger than anticipated even two years ago.

Will Meyer: One of the main contentions in your book is that climate change will dramatically accelerate migration. And, despite this administration’s rhetoric, border militarization is an acknowledgement, rather than a denial, of climate change. Can you expand on this idea?

Todd Miller: All of the assessments about climate change—whether coming from the United Nations, the private sector, the Department of Defense, or the Department of Homeland Security—are talking about accelerating migration, displacement of people, and how it will “challenge stability.” Already, 22.5 million people are already being displaced per year, according to the Internal Displacement Monitoring Center, with projections ranging between 150 million and one billion by 2050. There’s a lot of talk about risk, and that slips easily into talk about “terrorism,” they talk about conflict, and so on. A significant part of today’s border militarization exists in a context where it isn’t about today or the immediate present, but rather anticipating future events that could happen. DHS and others are planning 30 years into the future—for what they believe will happen—and climate is definitely on their minds.

WM: Who stands to profit from the militarized border as climate change continues on DHS and the military’s predicted pace?

TM: All trends show that budgets have been increasing, not only in the United States but around the world, with regards to border-security enforcement. On a global level, right now, there are 77 border walls (compared with 15 when the Berlin Wall fell). The trend of more and more countries’ having hardened borders is very much prevalent. And so, when you look at the market forecast, all of them show a homeland-security market that’s growing. There are reports that say it’s an unprecedented boom period. The last one that I saw for the homeland-security market had it going to $742 billion by 2023. In Storming the Wall, I had figure of $546 billion for 2022 for the broader global security market.

WM: One of the more interesting facets of your argument is that border enforcement, broadly speaking, is rapidly expanding, both within the United States but also around the world. You describe and predict transforming borders in places like Arizona but also places like Honduras and the Philippines. How is the border regime expanding, and what does a more global border look like?

TM: The United States has been purposely pushing out its borders, meaning that the border doesn’t end at the US-Mexico southern border. For example, in Puerto Rico, the Ramey sector of the US Border Patrol can patrol 1,000 miles to the south of the US mainland. This allows Border Patrol agents, and effectively the Coast Guard and Department of Homeland Security, to patrol around the Dominican Republic and Haiti. So what happened in the January 2010 earthquake that hit Haiti, one of the first US responses was to send 16 Coast Guard cutters that were right around the coast line of Haiti; they sent an airplane over Haiti with the voice of the ambassador, who was speaking Creole, but asking people not to leave the island while they were digging themselves out of their homes after they collapsed.

So, all of the sudden, the US border isn’t where you think it is. It expands and goes all the way up to the coast of Haiti. And if people were to leave—fewer people left than they anticipated—GEO group set up detention facilities at Guantanamo to intercept them. Everything’s in preparation. All of the sudden the border is right up against Haiti, and it is implemented very fast. That is one way it expands.

From a US perspective, there are other ways as well. Basically, the US is all over the world training border patrols in different countries, sending them resources, and helping them build up their borders, using the US border as a model. One example is southern Mexico, which has been building up its southern border, and is actually deporting more Central Americans than the United States for the first time ever. That’s just one example of many. There’s an outward expansion that’s happening, and it’s pretty significant.

WM: In the book you mention that border patrol forces were used at Standing Rock, which is technically outside of their 100-mile jurisdiction. Or another place where you argue a similar type of policing happened was during the climate protests in Paris in 2015. In other words, in order to police people reacting to climate change, either protesting or migrating, a state of emergency exists, which does away with basic democratic rights and resembles something closer to what you call martial law. Why is it important to cut off people’s rights in the climate context?

TM: So, here, what they’re doing is applying what the ACLU calls a “Constitution-free zone” along the border in the United States—like a state of exception or martial law. Authorities like border patrol or police, they rule. In the case of the United States and the border zone, they don’t have to go by the Fourth Amendment. Applying a state of exception, from a governmental perspective, it’s a way to control populations. But probably what they’re really worried about is populations that are organizing to maybe shift power, anything that threatens their legitimacy.

In the United States you think you have a Constitution, but just like that it can go away, like at Standing Rock. You think you have a constitutional right to blockade an oil pipe from being built, given the ramifications of climate change and the fossil-fuel industry? And here you are in what is effectively a state of exception, police can do now whatever they please, including arbitrarily arresting people and that sort of thing. And so, if from the DoD or Pentagon assessments of climate change, if temperatures go above two degrees provoking chaos, especially in the Global South, what are people who are most affected going to do? They’re going to be displaced. They’re going to migrate. According to that logic, that’s going to cause conflict. And thus, the militarized “we’re in control” approach is embraced.

WM: One of the historical parallels you bring up in the book is the Dust Bowl, which produced both economic and environmental refugees. What happened there and how does it prefigure to now, given all that we just talked about?

TM: Well the Dust Bowl example is really intriguing to me because [California] decided to enforce their state border, sending LAPD officers to the border with Arizona, creating a “bum blockade” to ward off migrants—who, then, were poor and often white. And here’s a gigantic environmental catastrophe that’s happening in the same country, causing the state to say “you can’t come here,” profiling people, asking them how much money they have, and that sort of thing. The irony is that’s exactly what happens on the international border now—people are profiled, they’re looked at.

TM: Permanently under water, I should say. The question becomes: What happens when these cities become uninhabitable? And what happens if there are mass migrations within the country? Or maybe it doesn’t happen like that, maybe it’s a slower kind of stirring of the pot. But it seems to me that there are future Dust Bowls predicted, figuratively and literally through the Southwest—they have predictions for mega-droughts like we’ve never seen before; 10 times worse than the Dust Bowl. One thing that could happen is a similar rendition of a bum-blockade, where similar lines of division start to happen within the country.

WM: Recently in the news has been the prosecutions of the No More Deaths activists. One of which, Scott Warren, is being charged with three counts of harboring and conspiracy and could face a 20-year sentence—for giving people a place to stay. You highlight the difference between climate security and climate justice. Can you speak to these prosecutions in this context?

TM: The prosecutions are just the most baffling thing ever. You know, people are going out into the desert where people are literally demonstrably dying and leaving water along different routes. What is most needed, as people are displaced and coming across borders, is cross-border solidarity, which can take many different forms. But also it just comes down to basic hospitality. There’s been at least 8,000 people who have been sentenced to death because of the way the [“prevention through deterrence”] policy is designed to funnel people into dangerous areas. And the type of humanitarian-aid work we’ve seen in the desert is clearly an attempt to remedy that.

Just last week there were four volunteers from No More Deaths who were found guilty for leaving out water in the desert. The were found guilty of all charges—“abandoning property” was one of them. So, not only is the climate-security paradigm blockading people, it’s also blockading the solidarity that people could have with their fellow human beings.

WM: And lastly, you quote Prescott Professor Zoe Hammer, who poses the hypothetical question: “What if the U.S. Border Patrol were put to work planting community gardens?” Why did you pick this question? What does it mean?

TM: I love that question. It comes off at first as almost sounding funny, but when you think about it more deeply it actually makes a ton of sense. These are vast resources—the US Border Patrol has 21,000 people, the 2018 budget was $23 billion between CBP and ICE. And when you think of ICE’s or Homeland Security’s or DHS’s view of security, which of course they talk about ad nauseam, and it’s always security against people who are poor, dispossessed, or displaced, but the real security issue at hand—at least one of the big ones—is climate change and how it will impact human beings.

So the idea of Border Patrol switching from being practically a military force in a border landscape stopping people from their own right to movement, and instead planting gardens and doing ecological restoration work around the country or around the hemisphere is a powerful idea. Putting these resources towards something useful would be a quite practical way to transition for what’s ahead.