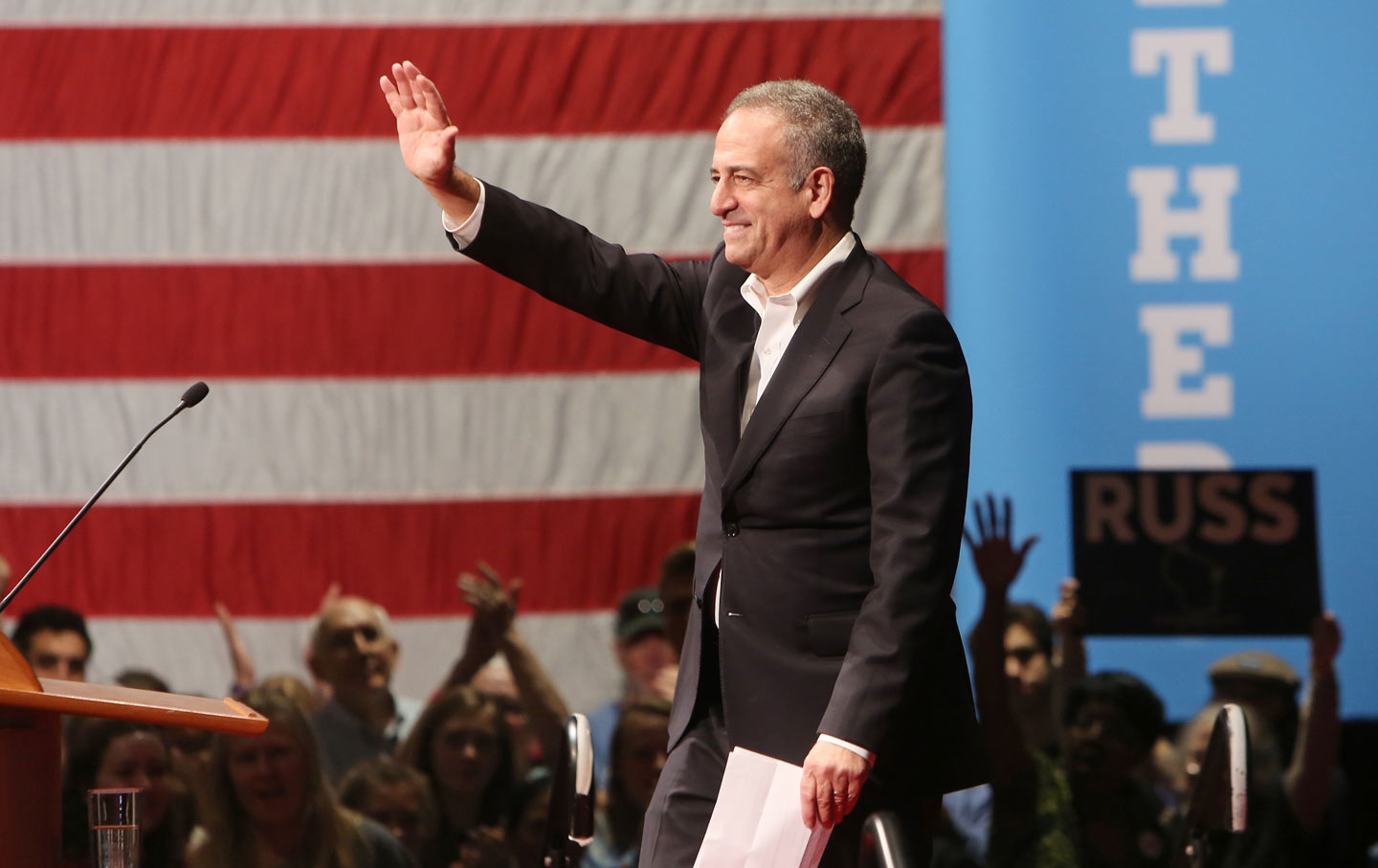 Russ Feingold, Democratic candidate for the US Senate, makes an appearance at a rally in Madison, Wisconsin, October 5, 2016. (AP Photo / Amber Arnold)

Russ Feingold has led most of the polls for most of 2016 in the race for Wisconsin’s US Senate seat. But the billionaire class is determined to prevent the election of the progressive populist foe of bank bailouts, bad trade deals and crony capitalism. So, as Election Day approaches, some of the richest people in America are pouring millions into a last-ditch effort to defeat the Democrat.1

This will come as no surprise to anyone who recalls Feingold’s record as a senator who from 1993 to 2011 stood up to Democratic and Republican presidents on economic issues—opposing the North American Free Trade Agreement and the permanent normalization of trade relations with China, opposing giveaways to Wall Street speculators, opposing attacks on banking regulations and crony-capitalist giveaways to multinational corporations. And, of course, there’s the small matter of Feingold’s determination to prevent billionaires and millionaires from buying elections.2

Like Vermont Senator Bernie Sanders and Massachusetts Senator Elizabeth Warren—both of whom are ardent Feingold backers—the Wisconsin Democrat understands that a campaign-finance system that allows “legalized bribery” is rigging the economy to benefit billionaires. And that scares the idle rich. So the very rich are opening their checkbooks once more, in hopes of keeping a very serious reformer out of the Senate.3

It’s not just about Feingold. The billionaires would happily fund campaigns against Sanders or Warren. But Sanders and Warren are not on the November 8 ballot. Feingold is. And if he wins, the progressive caucus in the Senate will be strengthened at precisely the point when Americans are demanding the sort of reforms Feingold has long proposed.4

Russ Feingold is backed by Bernie Sanders and Elizabeth Warren, and opposed by billionaire defenders of oligarchy.

That prospect is so scary that billionaire donors—and the political front groups they fund–are spending astronomical amounts to help reelect Feingold’s hapless foe, US Senator Ron Johnson, R-Wisconsin. Arguably the most nondescript member of Senator majority leader Mitch McConnell’s obstructionist caucus, Johnson was elected in 2010 on a Republican wave that is unlikely to hit again this year. It has been clear for months that the incumbent’s only hope for winning reelection is a smear campaign against Feingold.5

The negative television ads and mailings that deliver the smears cost money. And here it comes. Johnson, a millionaire whose primary mission in the US Senate has been to serve as an errand boy for economic elites, is getting a last-minute boost from the oligarchy.6

Wisconsin billionaire Diane Hendricks, a political associate of the Koch brothers and close ally of anti-labor Wisconsin Governor Scott Walker who serves on Donald Trump’s economic advisory team, gave $1.3 million to a pro-Johnson super PAC in September. “With her latest donation to Reform America, Hendricks is now up to $5.6 million that she had given to various PACs, super PACs, political parties and other entities helping out Johnson in his re-election bid,” reported the Milwaukee Journal Sentinel.7

Hendricks is not alone. As the election approaches, Feingold aides say, the Republican senator is “turning to his handful of billionaire backers to bail him out again.” Most of the money is going to supposedly independent groups. Those groups are spending heavily on negative ads that amplify themes associated with Johnson’s fiercely negative campaign. Desperate and angry, the erratic incumbent is lashing out at his challenger in increasingly visceral language that is often at odds with reality.8

While Feingold has long been known as an independent progressive who works across lines of partisanship and ideology to get things done—as he did during his Senate tenure, when he partnered with sincere conservatives on issues ranging from campaign finance reform to privacy rights, trade policy, and presidential accountability—Johnson is now trying to dismiss his opponent as a political charlatan.9

While Feingold sticks to the high road—telling reporters who ask about the incumbent’s startlingly-negative campaign that: “I respect Senator Johnson and his office, and I’m going to continue to talk about the issues and not get involved in that sort of thing”—Johnson rants about how his challenger is “lying about me, distorting my record and engaging in class warfare.”10

Feingold’s foe is millionaire Trump backer Ron Johnson, who chirps about campaigning as “the Ronald and the Donald.”

A Trump backer who chirps about campaigning with the Republican presidential nominee as “the Ronald and the Donald,” Johnson has brought Trump-style politics to the Senate race. Of Feingold, the senator says, “He’s a complete phony and I’m actually genuine.”11

In particular, Johnson is attacking Feingold for his post-Senate service, during which the Democrat taught at two prestigious universities (Stanford and Marquette), wrote a book on foreign policy in general and fighting terror threats in particular that continues to be praised by Democrats and Republicans (Arizona Senator John McCain: “Russ illuminates some of the challenges our nation faces in the post-9/11 era with his trademark integrity and independence”), and served as special envoy for the Great Lakes Region of Africa and the Democratic Republic of the Congo.12

Johnson’s attacks have grown so bizarre that they have been a certain level of amusement among commentators in Wisconsin. But the incumbent’s “hysterical scorched-earth strategy” cannot be casually neglected, as it is backed up by a billionaire class that fears genuine reformers like Russ Feingold.