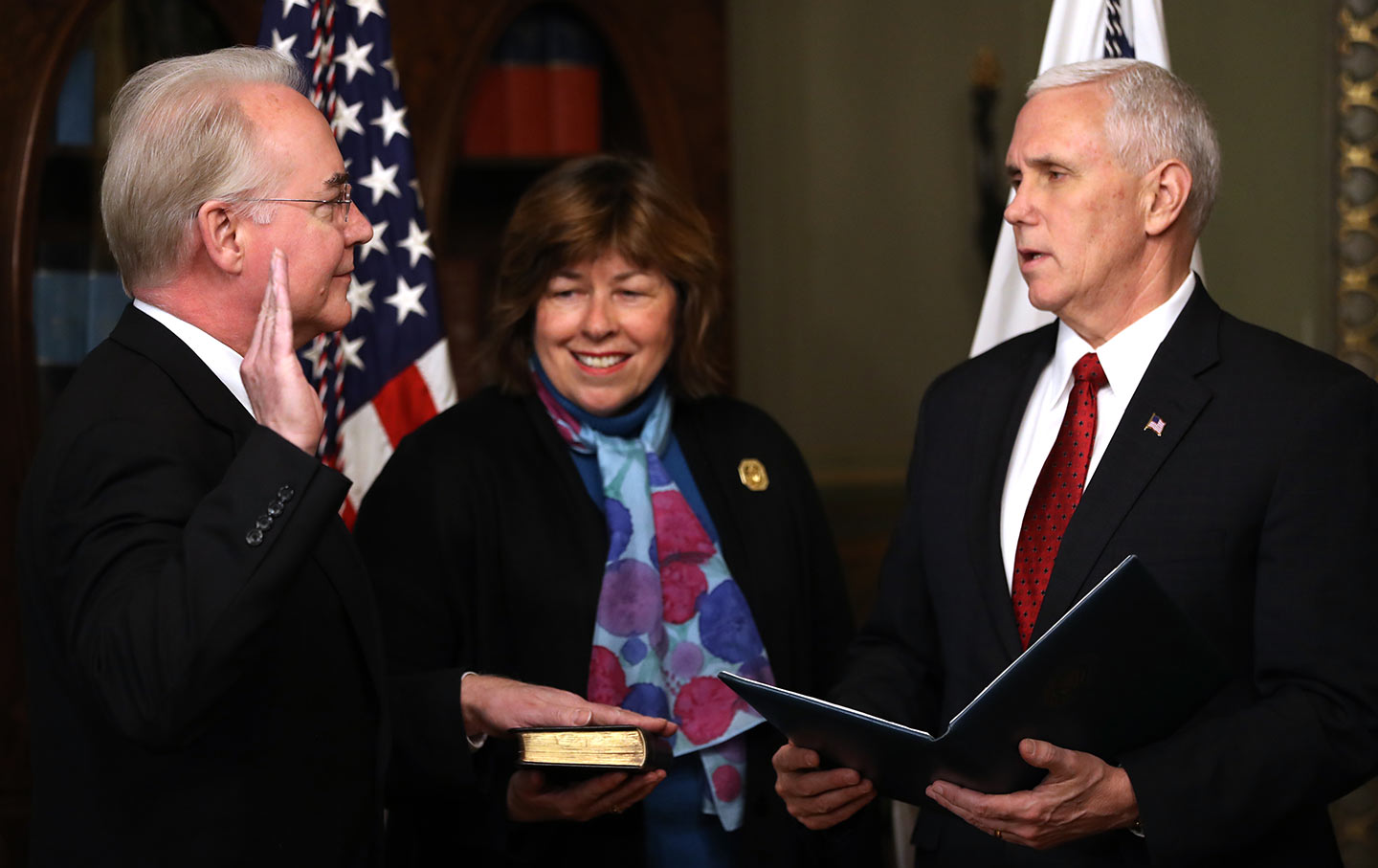 Back in early January, which seems like five years ago, Republicans passed a budget resolution through Congress, instructing House and Senate committees to deliver a plan to repeal and replace Obamacare under reconciliation rules (which only require a simple majority in both chambers) by January 27. We’re two weeks past that deadline, and not a single hearing has been held. GOP leaders have contradicted themselves eight different ways since then. First they said nobody would lose Medicaid coverage under their plan, and then they vowed to block-grant Medicaid, which would deliberately cut back coverage. Their most conservative members demanded a swift repeal under reconciliation, while key figures alternately floated ideas to let states retain the law, maintain the health-care-exchange subsidies until a replacement is finalized, and “repair” the ACA instead of repealing it. Senator Bob Corker, who tried to extend that January 27 deadline, acknowledged this week, “there’s not any real discussion taking place right now.”

With Donald Trump now suggesting Obamacare won’t get changed until 2018, insurers and hospitals uneasy, the right wing full of fury at Republican sellouts, and the left wing badgering their representatives with a force unseen in decades, you could be tempted to think that the whole project has run aground.

But the battle over health care really only began at 2:11 this morning, when the Senate cast the final vote confirming Tom Price as health and human services secretary. While Congress clearly doesn’t want to shoulder the burden of hashing out details for repeal and replace—because then they would be responsible for it—Price relishes the opportunity, and will get right to work. For the left, any assumptions of triumph should end today. To quote Senator Maria Cantwell this morning, “This is the first vote in the dismantling of the Affordable Care Act.”

Trump has consistently said he would not offer a health-care proposal until Price was installed. And Price comes in with his own well-documented plans, which he introduced practically every year of his congressional tenure. The Price blueprint assembles many stray Republican health-care theories, like health savings accounts, allowances for insurers to sell across state lines, tort reform, caps on the tax exclusion for employer health coverage, and high-risk pools for anyone rejected for a preexisting condition. Any time these ideas have been implemented at the state level or during George W. Bush’s administration, they failed to reduce the ranks of the uninsured or make health care more affordable. Most of the high-risk pools collapsed, because putting all the expensive patients into the same insurance pool is a self-evidently terrible idea.

But Price’s major provision replaces the ACA with a meager tax credit to purchase private insurance on the individual market. It also converts Medicare into the same kind of coupon system, while block-granting Medicaid.

This coherent (and cruel) plan is likely to be precisely what Trump introduces as the benchmark sometime in the next several weeks. And that would solve the lack of consensus plaguing the GOP over Obamacare. Republicans have generally followed Trump’s lead thus far, regardless of his popularity or the efficacy of the programs he has offered. (See the immigration order.) And the truth is they’re not really far off on this—most of the plans being discussed have similar elements to the Price bill.

What matters is that congressional Republicans don’t want to coalesce on any one bill and subsequently hold responsibility for it. Trump and Price relieve that problem. The GOP clearly wants that guidance, both to pass blame to the executive branch and to pound wayward members with something tangible that they must support. Lamar Alexander, chair of the Senate Health, Education, Labor, and Pensions Committee, admitted this earlier in the week. “We’ve got our own ideas and we’ll pass our own bill, but it’s hard to do anything this complex unless the president is directly involved.”

Alexander is essentially saying that Price isn’t so much an architect as a cover story. The Republican leadership already knows what they want to do. Once they get a Price blueprint, they will place four of his ideas—health savings accounts, high-risk pools, tax credits for purchasing individual insurance, and Medicaid reform—into a reconciliation bill that also repeals much of Obamacare. This is dependent on the Senate parliamentarian allowing those features as germane to a budget bill and acceptable for reconciliation. And on Medicaid there’s one huge question—whether to block-grant based on enrollment levels before the Obamacare expansion, or after. That will get extremely dicey, with parochial interests at stake. But if they iron that out, the bills could come up as early as next month.

Parallel to that, Price will roll out several executive branch actions on Obamacare. While they will be sold as stabilizing the individual market, most do the bidding of the insurance industry. According to some leaked drafts viewed by The Huffington Post, HHS wants to increase the “age band,” so insurers can increase premiums on older customers by up to 3.49 times as much as for their younger ones. The Affordable Care Act mandates a 3:1 age band, but the theory is that 3.49 “rounds down” to 3 (so the next time a store charges you $3.49, round down and give them three singles; tell them the government said it was OK). HHS also wants to shorten the length of open enrollment to 45 days (down from 90), build higher barriers to those who apply for coverage outside the enrollment period because of a life-changing event, and allow insurers to drop coverage for anyone over 30 days late on their premium. Every one of these would add hurdles to obtaining and maintaining insurance coverage, and likely reduce the ranks of the insured.

More changes are probably in the offing. As Congressman Bill Flores pointed out, there are 1,400 references to what the HHS secretary “may” or “shall” do in the Obamacare law, giving Price lots of opportunities to alter rules. That will take years of going through the administrative process, but he can begin it almost immediately. For example, Price, a physician, has never liked the provisions that condition Medicare reimbursement to doctors based on quality of care rather than the services provided; he’ll probably look to roll those back. It’s a death-by-a-thousand-cuts strategy to overlay with the repeal-and-replace strategy.

Victory is not guaranteed: There are too many stakeholders who want too many gifts to assume success. And even if the stars align, Price won’t be able to break all of Obamacare’s insurance reforms: Republicans have no idea what to do with the pre-existing condition exclusion, beloved by the public but impossible to maintain without some requirement for or nudge toward coverage that will prove unpopular. But in general, Price has a plan, and a method to get there even without Democratic support. The dissent at town halls and in the streets actually needs to get larger and more boisterous to not only protect the ACA but Medicare and Medicaid, the two social insurance programs that represent a superior model for delivering health coverage to the public. This is the moment when that fight begins.