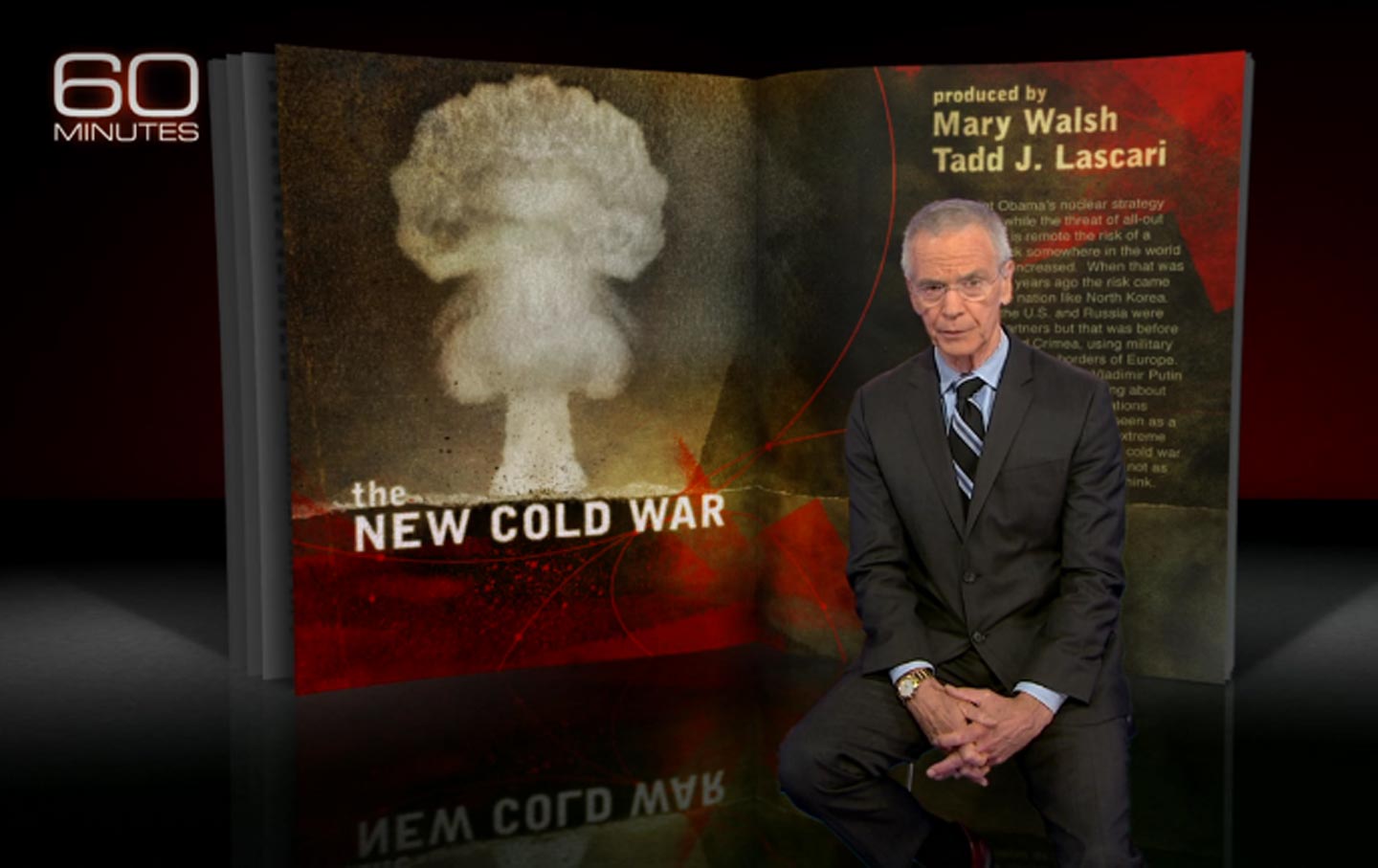 Sunday night, one of the oldest and most respected names in TV news, 60 Minutes, ran what was effectively a 14-minute infomercial for the US military and weapons contractors, hyping the threat of a Russian nuclear strike on Europe without an ounce of skepticism or context. In “Risk of Nuclear Attack Rises,” correspondent David Martin populates his segment primarily with fawning interviews with US military brass and Western think tanks, namely super-hawk and former Supreme Allied Commander Europe Philip Breedlove, who–after Martin lets the Air Force show off the big shiny nuclear bombs–kicks off the segment with this shocking pseudo-revelation:

David Martin: Was there ever any indication that Vladimir Putin was prepared to use his nuclear weapons in any way?

Phillip Breedlove: Vladimir Putin said himself that he would considered raising the alert status of his nuclear force.

David Martin: He had considered it?

Phillip Breedlove: He said it himself.

It’s unclear what “consider raising the alert level” means exactly, but Breedlove would go on to explain–citing a publicly available documents from the Putin government—that Russia would use nuclear weapons “when the very existence of the state is in jeopardy.” Martin suggests, but never explicitly says, this is somehow a radical new policy that threatens the fabric of the post-WWII nuclear order. This is a frightening claim, and one uncritically echoed to the program’s 15 million viewers.

Since Martin never bothers to get any side other than the US military and its satellite think-tank industry, The Nation reached out to nuclear-policy expert Joe Cirincione, president of Ploughshares Fund, a public grant-making foundation focused on nuclear weapons, for some perspective.

“Focusing on the threat from Russia minimizes the actual threat by downplaying the provocative posture we have and are pushing in newly threatening directions,” Cirincione told The Nation. “The B-52 exercise depicted in the episode [Martin flies along with an American nuclear bomber as it flies deep into the North Atlantic] is one example of the nuclear saber-rattling that we are doing that in actually more provocative than the similar behavior we condemn in others.”

In other words: 60 Minutes was right to raise awareness of the threat of nuclear war, especially as tension between the two countries grows, but by only highlighting Russian “aggression” the piece passes off policies both countries share as something unique to the Kremlin.

“The statement that Russia would use weapons when ‘the existence of the state is in jeopardy’ is actually more restrictive than our policy, as expressed in the 2010 Nuclear Posture Review,” Cirincione added. He highlighted this section that affords the US far broader latitude when deciding where and who to attack with nuclear weapons:

“The United States also reserves the right to use nuclear weapons to respond to an attack using biological or chemical weapons on ourselves or our allies,” Cirincione adds—the latter is not a right Russia publicly asserts.

None of this is mentioned in the 60 Minutes piece. No context as to whether Russia’s policy shifts were either significant or unprecedented. Nuclear first strike–the right to attack a country first–for example, is a a right the United States has asserted for decades.While President Obama has vaguely talked about getting rid of “first strike,” as of now it remains US policy, another important piece of context never mentioned by 60 Minutes.

It’s also worth noting the primary talking head in the segment, General Breedlove, has a history of inflating threats from Russia, even upsetting German intelligence when doing so in 2015. As The Intercept’s Lee Fang noted in July:

Der Spiegel reported that Breedlove “stunned” German leaders with a surprise announcement in 2015 claiming that pro-Russian separatists had “upped the ante” in eastern Ukraine with “well over a thousand combat vehicles, Russian combat forces, some of the most sophisticated air defense, battalions of artillery” sent to Donbass, a center of the conflict.

Breedlove’s numbers were “significantly higher” than the figures known to NATO intelligence agencies and seemed exaggerated to German officials. The announcement appeared to be a provocation designed to disrupt mediation efforts led by Chancellor Angela Merkel.

So a man whom we know to be actively hyping intelligence to foreign governments on the threat from Russia is brought on national TV to give what most people would see as an objective sober assessment of Russia’s intentions and capacity. Even if one is willing to take Breedlove’s dire warning on the Russian menace at face value, Martin never once challenges him, or any of the military spokespeople on any of their premises. He never asks for evidence (he briefly references a conveniently “declassified” CIA assessment) and never attempts to put any of the Chicken Little pronouncements in perspective.

The entire series of interviews are glowing and at times outright sycophantic–Martin refers to Adm. Cecil Haney, head of the US Strategic Command, as “low-key and cerebral,” before asking the following softballs: “Is it riskier today?”, “When you look at what would work to deter Russia, do you have to get inside Putin’s head?”, and finally, “Does it concern you that an opportunist [Putin] has a nuclear arsenal?”

Martin consistently refers to the US military in first-person plural, “we” and “us,” like a super-fan calling into an AM sports-talk show gushing about his favorite team. At no point is the premise that Russia is out to nuke the Western world or the motives of our scrappy military brass ever questioned. Both are simply taken at face value, and the viewer is left with the impression that the United States is lagging behind the Russian menace and must, therefore, spend even more money building up our nuclear arsenal.

One of the stranger moments is when David Martin let RAdm. Steve Parode psychologize Russia and assert that they have a belief “the West” is “sociologically weaker” and that Russia would attack the United States because of some vague moral failing.

David Martin: So they have a belief that they’re just tougher than us?

David Martin: And if they have to use nuclear weapons, we can’t, we can’t take it?

Steve Parode: I think that some people might think that.

Parode isn’t confident enough in his own analysis to assert it himself, instead couching it in weasel phrasing (“some” and “might”). Well, some might think a lot of things. How about, before scaring millions of TV viewers about Russia’s nuking the West, we have something a little more solid? It’s also a theory Joe Cirincione pushes back on. “It is not likely that the use of a nuclear weapon first by either the United States or Russia would lead to the other nation backing down from a conflict,” he said.  “Almost certainly the other nation would respond in kind. In short, there is no such thing as a limited nuclear war.”

But the program’s entire premise was that there is such a thing, and that the Russians are itching for one. At the very least, it’s a contestable assertion, and one that could have used a contrarian perspective.

That tensions between the United States and Russia have increased over the past years is not a controversial claim, but, as always with issues of geopolitical tit-for-tat, there’s the issue of “who drew first blood,” or who is the instigator. As typical in US media, the American military is always portrayed as acting in response to an irrational, hostile enemy. This conveniently frames the United States’s own increased posture as defensive and motivated by noble intentions, whereas Russia is imperial and expansionist.

To further this, 60 Minutes gave the distinct impression the United States began bulking up its nuclear capacity after Russian involvement in Ukraine in February 2014. But in January 2014 reports were already circulating of US plans for a $1 trillion “modernization” of its nuclear arsenal. Which of the plans for US escalation discussed in the segment were drawn up before Russia’s invasion of Ukraine is never made clear, and everything after February 2014 done by the Americans is simply painted as an organic response, with no preexisting policy antecedent.

Recent Gallup polls show US public opinion of Russia is at a post–Cold War low, with 65–70 percent of Americans having an unfavorable opinion of the Kremlin. While much of this is certainly informed by real-world actions (Russia’s annexation of Crimea, its bombing of Syrian rebels), the corollary media panic perfectly captured by this 60 Minutes segment—portraying everything Russia does in the worst light possible, and everything the United States does as noble and justified—goes along way to compounding these fears. And in doing so, making any type of future nuclear de-escalation that much less politically viable.