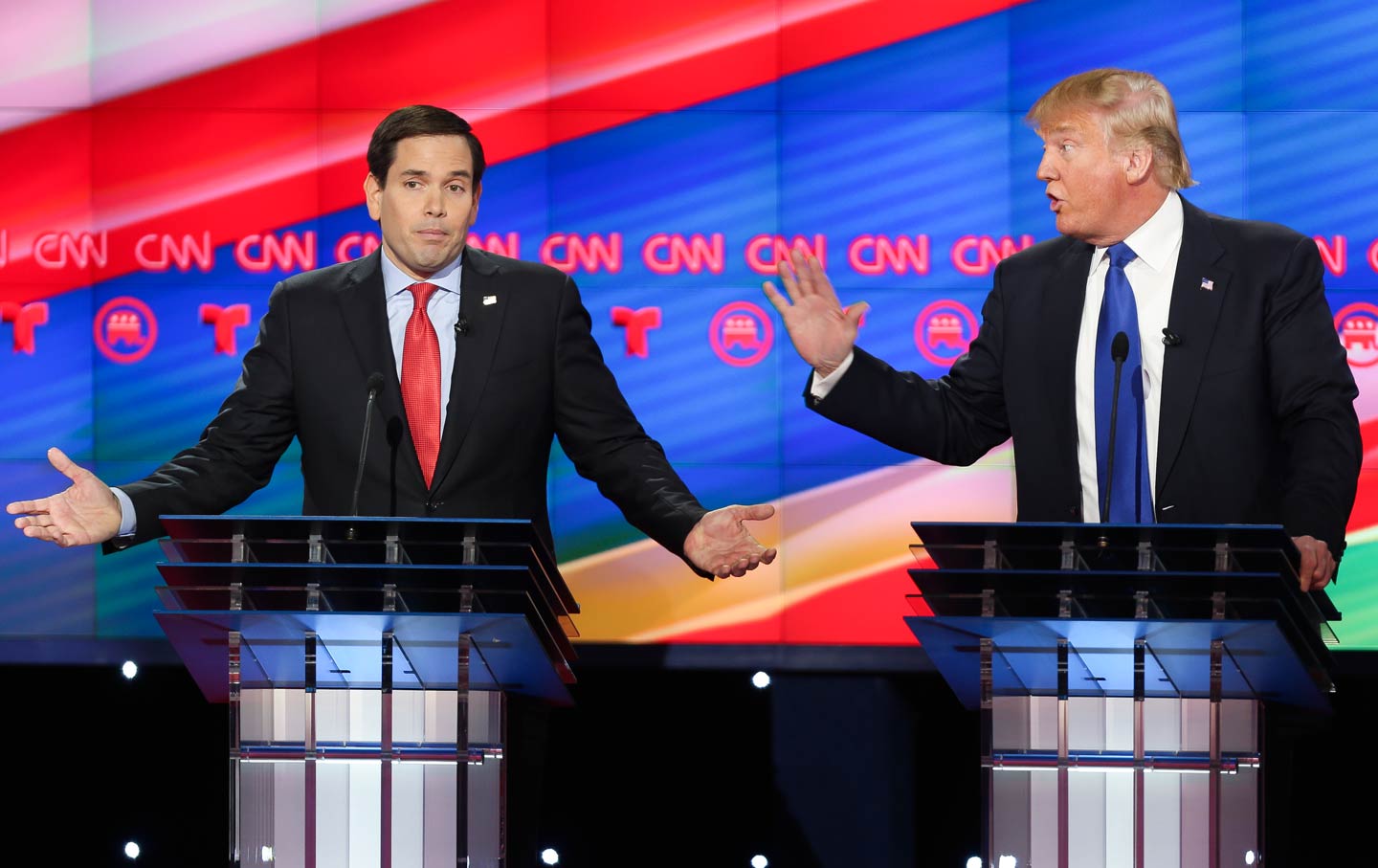 At the Republican debate in Houston last night, Marco Rubio nudged the door that Hillary will have to bust wide open when she goes up against Trump in the general election.

Rubio got in lick after lick against Trump’s supposed strong point and the locus of his greatest vanity: his prowess as a businessman. Rubio painted Trump as a slimy “con artist” who, if it weren’t for his inheritance from his dad, would be “selling watches in Manhattan.” (The Rubio campaign is trying to inflate this into a meme by selling broken “Trump watches” on its website, which notes, “You won’t actually get a broken Trump watch, but your $10 donation will help Marco stop him.”) Rubio wasn’t just saying that Trump oversold his business acumen. He was insisting that the former reality-show star’s business practices are a serious character issue.

And Rubio may have helped open up a bleeder’s cut for Clinton by portraying Trump as a hypocrite about the immigrants his base so loves to hate. Far from building walls to keep them out, Trump hired cheap foreign labor instead of hundreds of willing and ready Americans, as Rubio pointed out. Rube’s oppos folder included something about Trump’s getting sued for hiring undocumented Polish immigrants (“Google it!” Rubio said). He went on to say that if Trump were to build “the wall the way he built Trump Towers, he’ll be using illegal immigrant labor to do it,” and that the Trump label manufactures clothing in the same Mexico and China that he says are stealing American jobs. “So,” Marco concluded, “you’re gonna be starting a trade war against your own ties and your own suits.”

And though it was hard to hear over Trump’s protests, Rubio gleefully attacked the real-estate mogul’s “fake university,” a lawsuit-magnet that charged $36,000 to students who claim they got little in return. “You know what they got?” asked Marco. “They got to take a picture with a cardboard cutout of Donald Trump.” No wonder, Rubio implied, Trump doesn’t want to make his tax returns available, something both Mitt Romney and Ralph Nader, of all duos, hit Trump on this week.

Trump dismissed many but not all of these charges. But he was on the defense and his tight body language showed it. So for anyone, left or right, who wants to see Trump knocked down a peg, Rubio’s performance was delicious. Maybe it will earn him some points in his March 15 home-state Florida primary, where he’s trailing Trump badly. Yet, as far as stopping Trump’s coronation is concerned, as pundits have been declaring all morning, “it was too little, too late.”

But it’s not too late for Hillary. Rubio’s jabs were just the sort of GOP-on-GOP violence she’ll need to make her negative ads and social media credible. It could operate much in the same way that Newt Gingrich’s attacks on Mitt Romney’s business practices let Obama bleed him out in 2012. And most media observers, who finally accept that Trump will be the nominee, believe that Hillary will have to go very negative.

Ben Smith at Buzzfeed says that the “only strategy” for Hillary against any Republican is to “[s]corch the earth.” The New York Post’s Mark Cunningham makes Trump out to be almost an innocent against the hellfire Hillary will unleash, writing that “even Trump will be taken aback by the venom that’s about to come his way. It’ll make the primary look like a knitting circle, and Megyn Kelly seem as sweet as Melania.”

It’s too early for all that now, and Hillary may be finally settling into a more positive groove. In a long interview with Clinton, Joe Scarborough said that after her Nevada win, she seems to be a different, more relaxed candidate. Hillary agreed, saying that she finally found her message. It’s “Break down the barriers to America and Americans living up to their potential,” she said, somewhat confusingly, and then maybe over-explained: “So using this barriers metaphor really works for me because it helps me organize everything I’m talking about.”

(A new Clinton ad, probably the best of hers to date, says it better. But then it’s Morgan Freeman narrating: “Her life’s work has been about breaking barriers, and so would her presidency, which is why for every American who’s not being paid what they’re worth, who’s being held back by student debt or a system tilted against them, and there are far too many of you, she understands that our country can’t reach its potential unless we all do.”)

This is a pretty decent positive message for Hillary. But she’ll need an attack message, too, probably something that runs right at Trump’s claim to be a truth-teller (though that’s hard with a guy now known for telling truths like “Bush lied us into war” and lobbyists control politics). The real debate between Trump and Clinton may be less over policy than over who these two very well-known people really are.

Clinton is already in the way of three of Trump’s chief attacks: trade agreements like NAFTA, the Iraq war, and money in politics. The old pre-Trump Republican Party never attacked her on those, because they had made them dogma. Until Bernie, she’s never been excoriated on those subjects in a sustained way—and all three go to her honesty and character. But she needs to fight Trump not on policy, because she can’t defend herself small-bore; she needs instead to make his bullying more worrisome than her dishonesty.

In some ways, Hillary is our Romney. In 2012, the GOP base was in a rage against Obamacare, and whom do they nominate? Romney, the guy who created Obamacare. Now, the Democratic base is enraged about banks and the 1 percent, and whom do they (in all probability) nominate? Someone who took money from Goldman Sachs and has been close to Wall Street. And like Romney, she’s more ill at ease on the stage than her chill and media-savvy opponent.

Clinton needs to defend herself offensively—a tricky thing that Romney was never able to manage.