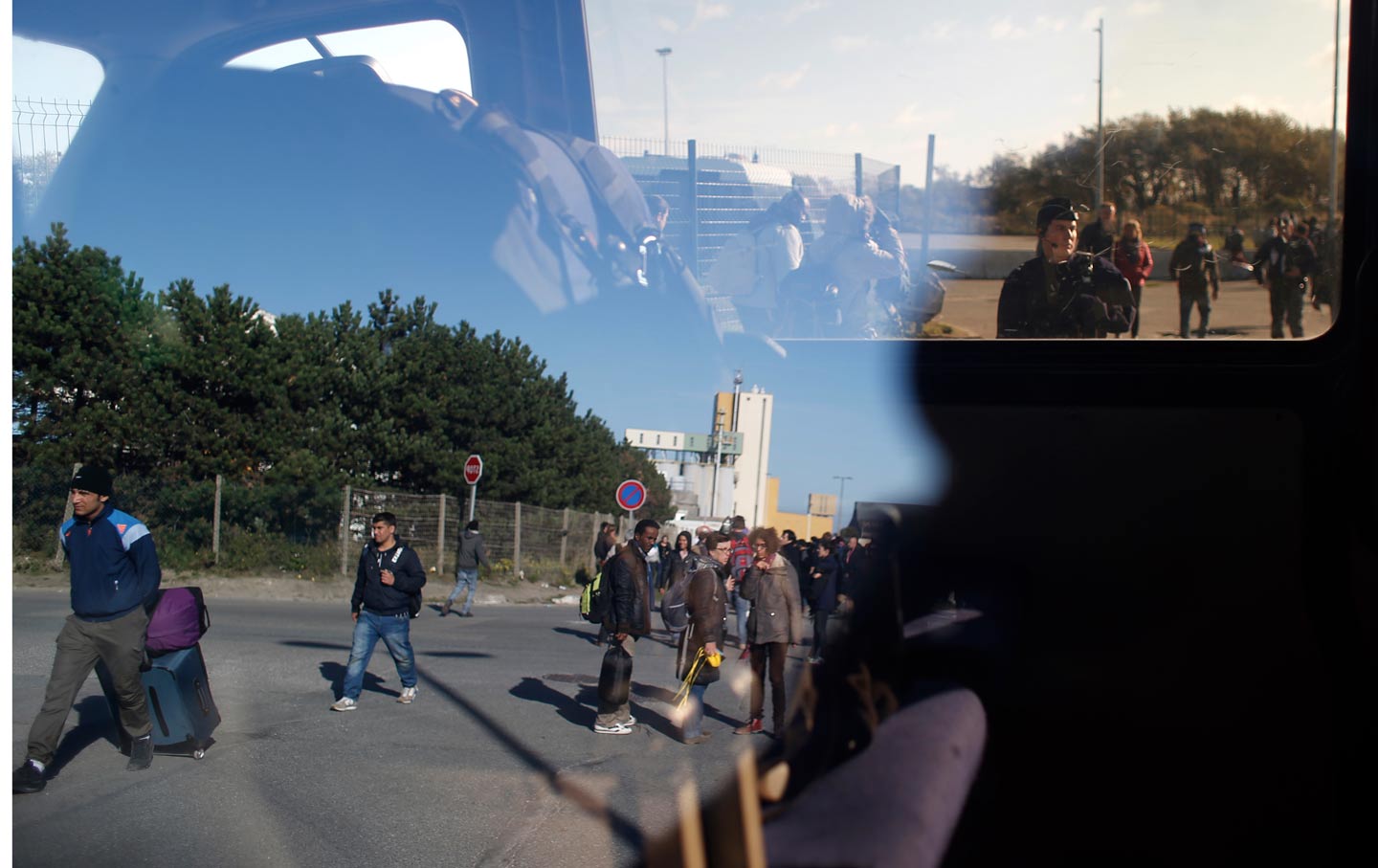 Migrants in northern France being forced out of the makeshift camp known as the Jungle. (Thibault Camus / AP Photo)

While Europe rushes to steel its external borders against an oncoming wave of migration, its internal political union is dissolving under a storm of populist nationalism. French officials’ ongoing scorched-earth demolition of the migrant camp in Calais known as “the Jungle” was a haphazard stitch on a gaping continental wound. To the east, Hungary’s recent botched referendum further underscores the xenophobic panic driving right-wing forces across Europe’s eastern and southern frontiers.

Yet continental politics are hardly deterring new arrivals entering Europe by land and sea. The dead bodies that have washed ashore show that nothing, not even death, can deter their drive to escape war and deprivation in their homelands.

European Union ministers remain gridlocked over plans to distribute about 120,000 asylum seekers among member states by controversially allotting migrants according to countries’ economic and social capacity. Conservative politicians resisted the concept, which includes potentially “fining” governments about €250,000 for every migrant they reject.

Without a relocation plan, Brussels has resorted to dumping refugees over the border in Turkey, where an increasingly authoritarian government is getting paid to warehouse desperate refugees (yet flouts its duty to grant temporary protection, advocates argue). Thousands of asylum seekers continue to risk their lives each week, crossing the Mediterranean to Italy on flimsy smuggling boats. Rescue patrols pulled about 5,700 migrants, and 14 bodies, from Mediterranean and coastal waters in one weekend in late October.

The populist right, galvanized by Slovak and Hungarian leaders—seed no real social obligation to care for migrants and seekd instead to further militarize borders, despite the fact that few migrants actually want to resettle in their countries and instead are simply crossing toward Germany or another wealthier country.

The politics of xenophobia in Brussels legislative chambers is reflected in the vicious violence at the border. Migrants are regularly apprehended and brutalized by police as they traverse the Hungarian-Serbian border.

Hungary’s allotted migrant quota, which it rejected as an affront to its sovereignty—was fewer than 1,300 people—about the number that may arrive in Italy in one day. But Hungary is just the sharp edge of Europe’s crisis. Amnesty International reports that despite past promises to step up the relocation and resettlement process of migrants, tens of thousands remain scattered and in legal limbo, though most may have valid asylum claims.

Rights advocates point out that while wealthy European nations balk at accepting refugees, millions more are displaced regionally within Asia, Africa, and the Middle East. According to Amnesty, just 10 Global South countries host most of the world’s 21 million refugees; relatively impoverished Jordan and Lebanon, not Hungary or Belgium, are the primary destination for victims of the Syrian crisis, absorbing about 4 million refugees with a tiny fraction of Europe’s GDP.

Some restrictionists have even proposed enlisting the security forces of non-EU border states in Africa and the Middle East to curb migration. Seeking to filter out less desirable foreigners (what some describe as a crass attempt to “‘pick’ refugees like it’s a beauty pageant”) EU officials have brokered a deal with Afghanistan’s notoriously corrupt and embattled government to help claw back migrants trying to escape to Europe.

While officials squabble over quotas, ad-hoc encampments metastasize by railroad tracks, in converted stadiums, crude tents, and barren lots. One 26-year-old refugee described to Amnesty researchers the bleak outlook from Softex refugee camp in Thessaloniki, Greece: “Every day we die 100 times; the air is no good here, the food is not good, there is infection here. Even animals could not live here.”

After braving bombs and torture to make their way to Europe, refugees are ensnared at the border, ironically, by a mere slip of paper. According to Amnesty, Greece has failed to provide people the required visas to allow family members to reunify, prompting calls for reforms to visa criteria to make it easier for displaced children to rejoin kin in Europe.

Today, tens of thousands of unaccompanied children are strewn across the continent; 137 kids died attempting to migrate in the first half of 2016. Yet emergency relocation efforts have rehoused only about 42 kids. Countless others are vanishing into the migrant underworld’s drug, labor, or sex-trafficking networks.

Sometimes it’s the parents who are stuck alone, having arrived separately or been torn apart from their families during the tumultuous journey. Firial, a 33-year-old mother at a Greek camp, described to researchers her agonizing months-long struggle to rejoin her husband and children in Germany. The authorities fed her pills for her depression—psychological trauma is endemic in the camps—but couldn’t give her a passport; she could not afford the 600-to-700 euro fee.

“I suffered a lot,” Firial said. “I lost my house. I went to Turkey. My children lost so much time out of school. I don’t know when I will get to Germany. This is killing me.”

According to Iverna McGowan of Amnesty International European Institutions Office, while the focus has been on enforcing borders, the humanitarian response lags woefully behind:

European countries cannot shirk from their responsibilities. This cynical attempt to build up the walls of fortress Europe and try to outsource Europe’s obligations, ignores international human rights law carefully laid down to protect people in danger…. The militarization of borders does nothing to deter people from trying to reach safety in Europe, it only makes the journey more dangerous.

The rhetoric of border enforcement and populist nationalism exposes the real weakness of the European project: The “stronger” official Europe purports to be at the borders, the weaker it grows within its social and moral core. Sealing off national gates can’t suppress human movement, but it does slowly suffocate our humanity.