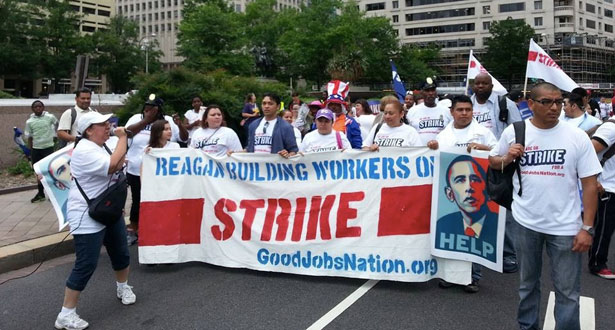 Federal contract workers strike in July of 2013. Courtesy of GoodJobsNation.org

As his 2014 State of the Union address nears, President Obama has said that he’s willing to use executive actions to circumvent a gridlocked Congress and to take real steps to fight inequality. He could start by giving a raise to millions of federal contract workers.

According to the National Employment Law Center (NELP), three out of four workers in service-industry federal contract jobs make less than $10 per hour and only eleven percent have employer-provided health insurance. Of the workers that NELP interviewed, fifty-six percent admitted to having trouble paying their monthly bills.

The president has indicated that he’s considering an executive action and activists are hoping that he’ll make an announcement during his State of the Union address. To help keep up the pressure on the president, sign our petition urging him to give federal contract workers a raise.

Last week, employees working under federal contracts—including around fifty food service and janitorial workers at the Pentagon—walked off the job. At Salon, Josh Eidelson covered the strike and the growing movement to improve the pay and working conditions of federal contract workers.

This video created by Good Jobs Nation, the coalition behind last week’s strike and previous actions, looks at the organizing that got the movement to where it is today.