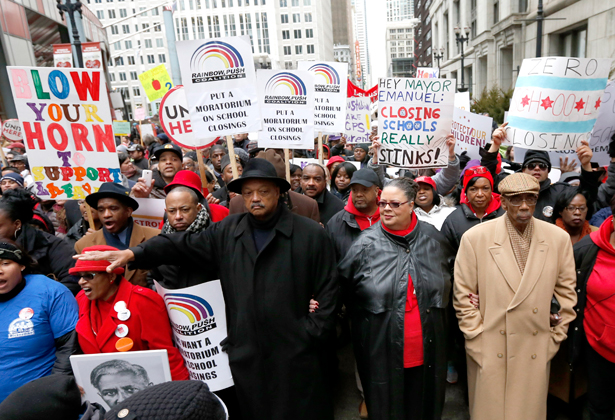 Over the summer, the Chicago Board of Education held a vote whether to shut fifty-four schools. Ultimately, the board voted to close fifty schools, a controversial decision that drew criticism from the city’s teachers union, parents, and students. Of the students affected by the closures, 88 percent are black, 10 percent Hispanic, and 94 percent come form low income households.

The city, including Mayor Rahm Emanuel dismissed concerns that the closures are a form of racial discrimination by promising students would have access to better facilities in what are called “welcoming schools.” Though some students and parents expressed concern that children would have to walk longer distances, oftentimes through dangerous parts of the city in order to reach their new schools, officials promised all the hassle would be worth it because the old, “bad” schools would be gone.

President of the Chicago Teachers Union (CTU) Karen Lewis was skeptical from the beginning:

“Closing 50 of our neighborhood schools is outrageous and no society that claims to care about its children can sit back and allow this to happen to them. There is no way people of conscience will stand by and allow these people to shut down nearly a third of our school district without putting up a fight. Most of these campuses are in the Black community. Since 2001 88% of students impacted by CPS School Actions are African-American. And this is by design.”

Lewis added, “These actions unnecessarily expose our students to gang violence, turf wars and peer-to-peer conflict. Some of our students have been seriously injured as a result of school closings. One died. Putting thousands of small children in harm’s way is not laudatory.”

But while the solution was tough, Emanuel insisted it was necessary:

“If we don’t make these changes, we haven’t lived up to our responsibility as adults to the children of the city of Chicago. And I did not run for office to shirk my responsibility,” he said.

Emanuel was out of town when schools chief Barbara Byrd-Bennett made the closures announcement.

Now, Chicago students and parents are beginning to fully comprehend the consequences of the closures and “welcoming schools,” and unsurprisingly, their real-life experiences are vastly different to city officials’ claims. Some Chicago families complain of overcrowding and an overall lack of support during the transition.

Devion Allen, an eighth grader, used to attend Lafayette Elementary, a school Allen describes as being “like a family.” In an interview with the AP, Allen said, “It’s not fair” in response to the city’s plans to turn the empty building into an arts high school operated as a contract school, publicly funded but privately run.

Allen now attends a “welcoming school,” The Choplin School, which is so overcrowded that the staff has been forced to give up on promised transitional provisions like a computer lab, the library, and art and music rooms. The AP also reports that the school’s psychologist, occupational therapist, and speech pathologist are working in windowless, unvented spaces that were formerly storage closets.

Sometimes, students are tested in these spaces.

The environment in the “welcoming schools” mirror the very complaints officials made of the original “bad schools” that they argued needed to be closed. Classrooms are still overcrowded and resources are scarce.

Special education students also have suffered, say teachers and student advocates. At least one school that has dozens of new special ed students, the Courtenay Language Arts Center, has yet to set up a behavioral health team to assess those children’s needs in a faster, more organized way, staff members say.

And teacher Michael Flynn says his school is using a room not much larger than one of those closets as a special education room for 13 children because there’s simply no other option.

“There’s not enough space. There’s not enough resources,” said Flynn, a longtime seventh-grade literature and social studies teacher at the James Otis World Language Academy, a welcoming school northwest of downtown Chicago. Despite the school’s name, the world languages teacher was among those who lost a classroom because of the space constraints and, instead, travels from room to room.

These kinds of findings aren’t new. University of Chicago research published in 2009 (pdf) found that previous closures in Chicago also didn’t do anything to better students’ education. In fact, the closures didn’t boost reading and math scores unless students transferred to higher-achieving schools, but a very small percentage of them actually ended up at those schools.

The opposition to the education reformers in Chicago, and all across the country, continues. Students and teachers from more than sixty cities are slated to participate in a day of protest Monday that is being billed as the largest unified opposition to educational reforms that organizers say have devastated families and communities.

From Baltimore to Philadelphia to New Orleans to Chicago, parents, students and teachers will protest against mass school closings, the growing practice of turning over management of public schools to private companies and other measures that disproportionately hurt low-income students of color, organizers say. The day, which will feature dozens of coordinated events, is being organized by a coalition of labor, civic and civil rights organizations.

“The Day of Action is important because young people are under attack when it comes to public education,” Murphy, a high school senior who hopes to attend Howard University or Bowie State University next year, told The Root. “We have found that the educational decision-makers do not value the thoughts and opinions of young people. That creates a critical gap when it comes to making decisions about our future.”