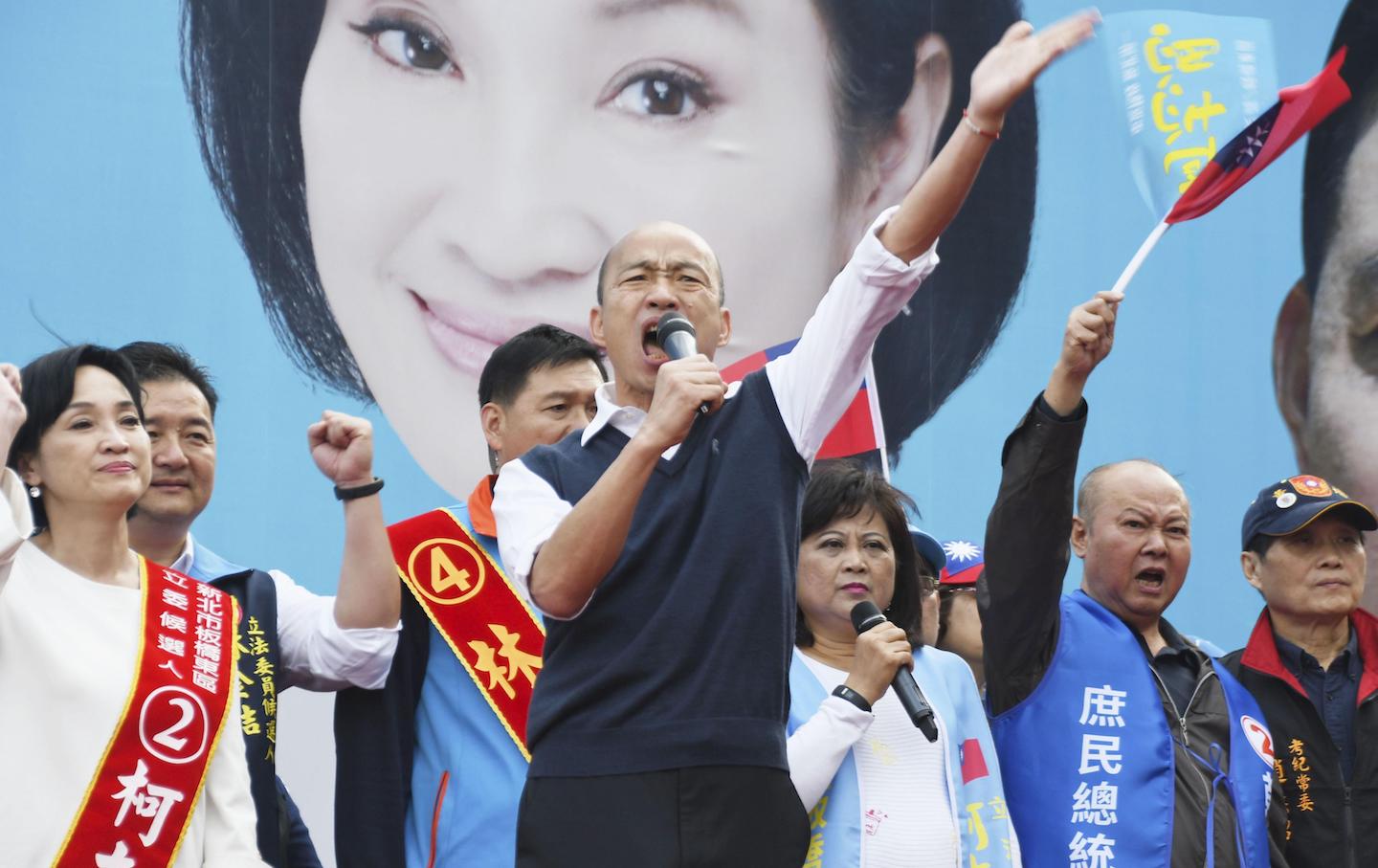 In the months before Taiwan’s upcoming elections, an apocalyptic phrase has been circulating on the country’s social media: “national doom.” This term has been around for almost as long as the country itself, and it’s now widespread enough that all three presidential candidates used it during their debate in December.

Days away from the presidential and legislative vote set to take place on January 11, it’s also clear that the idea has two competing interpretations. For supporters of incumbent president Tsai Ing-wen and her Democratic Progressive Party (DPP), national doom would mean the loss of Taiwan’s sovereignty and an end to its democratic freedoms. But the Kuomintang (KMT) or the Nationalist party, which sees Taiwan as an inseparable part of the People’s Republic of China (PRC)—is also driven by the fear of national doom, albeit of a very different order: Members of the KMT claim that the DPP is engaged in a political project of “desinicization,” aimed at erasing symbols of Chineseness in order to put an end to the Republic of China (as Taiwan is still officially known) and realize “cultural Taiwanese independence.”

When Tsai Ing-wen was elected in 2016, she became the first woman president of any Chinese-speaking country. The DPP is pro-independence, and Tsai is unapologetic about the fact that she sees Taiwan as a country that is already separate from Xi Jinping’s PRC. She has spent her time in office steering a liberal, though moderate, course: Her administration has worked to build stronger ties with countries in Southeast Asia in order to reduce dependency on trade with China, and she made history when Taiwan became the first country in Asia to legalize same-sex marriage.

By contrast, Tsai’s main opposition, Han Kuo-yu, is a populist who has expressed misogynistic views about female politicians and racism toward Southeast Asian migrants. (The third candidate, James Soong from the small, center-right People First Party, is unlikely to be elected.) Han is a member of the KMT—which holds the view that Taiwan and China are part of the same country—and was largely unknown until the party pushed him to run for mayor of Kaohsiung, the largest city in southern Taiwan, in 2018. He became wildly popular and won that election, but has since gained a reputation for gaffes and poor city management—not to mention his months of absence from municipal affairs while running his presidential campaign. 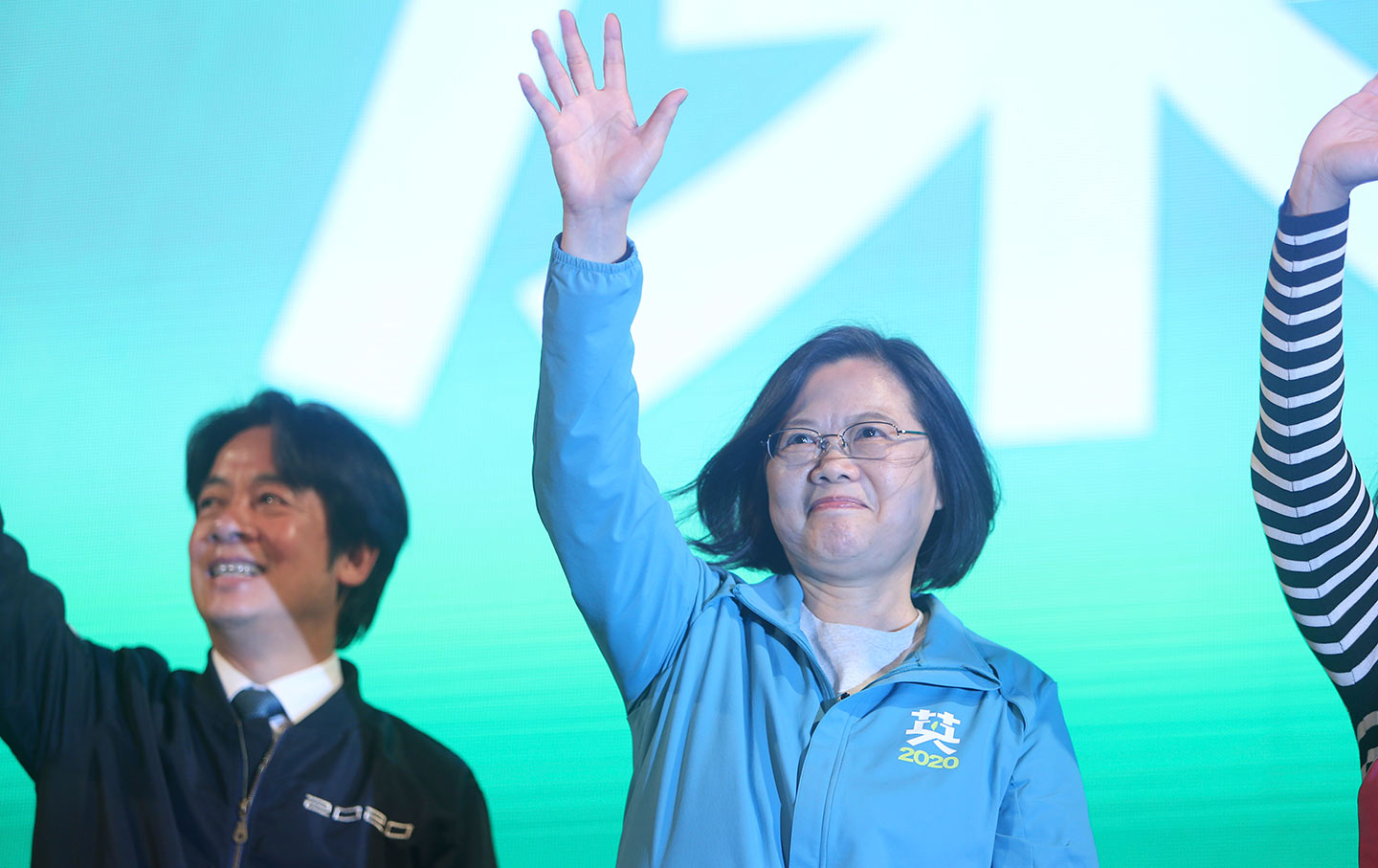 A political candidate with populist views is nothing new in Taiwan: Chen Shui-bian, cofounder of the DPP, leveraged identity politics during his presidency to create a new vision of a nation-state distinct from the PRC. (He was later convicted on corruption charges.) But Han is controversial—and, to some, a harbinger of “doom”—because he is seen as overtly pro-China, at a time when more young Taiwanese support complete independence. The KMT suggested last year that if it returned to power in 2020, a KMT president might sign a peace agreement with China, which many in the pro-independence camp fear could include terms ceding Taiwan’s sovereignty. Last March, Han visited the Hong Kong office of a Chinese government agency that aims to implement the “one country, two systems” rule over China’s claimed territories, including Taiwan; this was before mass protests had begun, but Taiwanese reporters still called the visit unusual and possibly disrespectful to the notion of Hong Kong’s autonomy. Not only that, but a self-proclaimed former Chinese intelligence operative has claimed that he helped funnel $2.8 million from the Beijing government into Han’s 2018 mayoral campaign—a charge which Han’s team has strongly denied.

Seeing the writing on the wall, Han has since expressed support for Hong Kong democracy and said he wouldn’t seek a peace agreement with China. Nonetheless, his actions have already led some pro-independence voters to believe that a Han presidency could lead to the fulfillment of Chinese leader Xi Jinping’s fondest wish: Taiwan’s reunification with the PRC.

The phrase “national doom” has a history of being used by both sides of the political divide. Its etymology can be traced to a speech delivered to Kuomintang officials by party leader Chiang Kai-shek in 1950: He called himself “the maker of national doom” as he and his troops, defeated by Mao Zedong’s Communists, retreated to the island that would become the Republic of China. In a debate leading up to Taipei’s mayoral election in 1994, the pro-unification New Party candidate, Chao Shao-kang, argued that the ROC “would be doomed” if voters allowed the pro-independence DPP to rule. China’s continuous military threats against Taiwan—particularly since its first direct presidential elections, in 1996—have perpetuated this sense of constant near-crisis.

The KMT has long since ceased to advocate for Taiwan to retake China using military might. Now, some KMT members, and other members of the so-called “pan-blue” camp, advocate for outright unification with China, on the basis of historical claims rooted in Han ethnonationalism. Taiwan is an increasingly diverse country; one in 10 elementary and middle school children in Taiwan has a foreign parent, usually from Southeast Asia or China. But Han Kuo-yu and other KMT politicians have lashed out against this notion, denigrating migrants and suggesting that it is futile for the DPP to try to strengthen economic and political ties with Southeast Asia. Instead, according to Han, Taiwan’s economic prosperity is (and should remain) deeply linked with China’s, with historical and cultural bonds that the Tsai administration hopes to break.

The “pan-green” camp—comprising political groups that support the emergence of a distinct Taiwanese identity—have also publicly embraced the protection of indigenous land rights, LGBTQ rights, support of social services for recent Southeast Asian immigrants, and reproductive justice for women. Nevertheless, the KMT has refused to embrace these efforts to push for social equality, with its politicians promising to repeal gay marriage if elected. The KMT seems to see the push for greater pluralism and the embrace of diversity as cultural assaults on its power and on Taiwan’s Chinese identity. In its attempts to secure conservative votes, the party has become less and less relevant to younger voters.

Two key issues that have instigated particular feelings of “national doom” for the socially conservative, pan-blue side involve the restructuring of the welfare state and of gender and sexual norms. In 2017, the Tsai administration instituted pension reforms that undid decades of special benefits for retired civil servants such as soldiers, police, and teachers—groups which had formerly constituted a political and economic elite, enjoying disproportionately generous pensions as a reward for loyalty to the KMT during authoritarian times in Taiwan. Then, in 2019, the government legalized same-sex marriage.

These decisions by the Tsai administration were controversial, and the backlash arguably contributed to the DPP’s landslide defeat in the midterm elections in November 2018—and to the rise of Han Kuo-yu, as both Kaohsiung mayor and national figure. But the DPP’s actions have not always been popular with Taiwan’s more progressive factions, either: The party has been accused of making false promises regarding indigenous land rights and undoing decades of labor reforms through changes to the Labor Standards Act in late 2017. In these cases, the DPP came into conflict with progressive “Third Force” parties such as the New Power Party, which emerged after 2014’s student-led Sunflower Movement (in which we, the authors, were both active participants).

Beyond rejecting “cultural Taiwanese independence,” Han has repeatedly criticized Tsai for not using the country’s constitutional name, “Republic of China.” But the DPP is less radical than the KMT claims. Tsai has never rejected the country’s official name outright, and even faced presidential challenges from other pro-independence leaders for not enacting constitutional reforms that would formally change the country’s name to “Taiwan.” And despite Tsai’s vocal support for the Hong Kong protests, she hasn’t opened the doors to refugees from the territory or from mainland China. But it nonetheless seems clear that the DPP and other pan-green parties are moving toward a new sense of “Taiwaneseness”—a distinctly different identity from the Han-centric “Chineseness” of the KMT and Xi Jinping’s China.

China has ramped up its imperialist ambitions and rejected democratic reforms; the resulting protests and police brutality in Hong Kong and the Chinese government’s brutal treatment of Uighurs are just two reasons many young Taiwanese voters have no interest in being included under Beijing’s framework. The KMT has long advocated for a cross-strait relationship with China known as the 1992 Consensus: “One China, respective interpretations.” Now, Taiwanese voters’ support for the Hong Kong protesters has forced Han Kuo-yu to attempt to distinguish that idea from the “one country, two systems” framework that China claims to use to govern Hong Kong.

But the die had already been cast. After the KMT released its list of legislative candidates for this election—including a number of individuals known for their explicitly pro-China stances—the party saw a serious downturn in its approval ratings.

Unless the situation changes drastically in the coming days, Tsai is expected to win reelection. It is a greater question as to whether the DPP will be able to retain its current majority in Taiwan’s legislature, as other parties from both the pan-blue and pan-green sides emerge. No matter the result, the discussions about national doom from both sides may not be completely politically unproductive; after all, they signify the need for a deeper examination of Taiwan’s past, and of visions for its future. The contest between two conflicting notions of “national doom” reflects a struggle between two different visions of what it means to be a nation, and what values a nation should stand for.