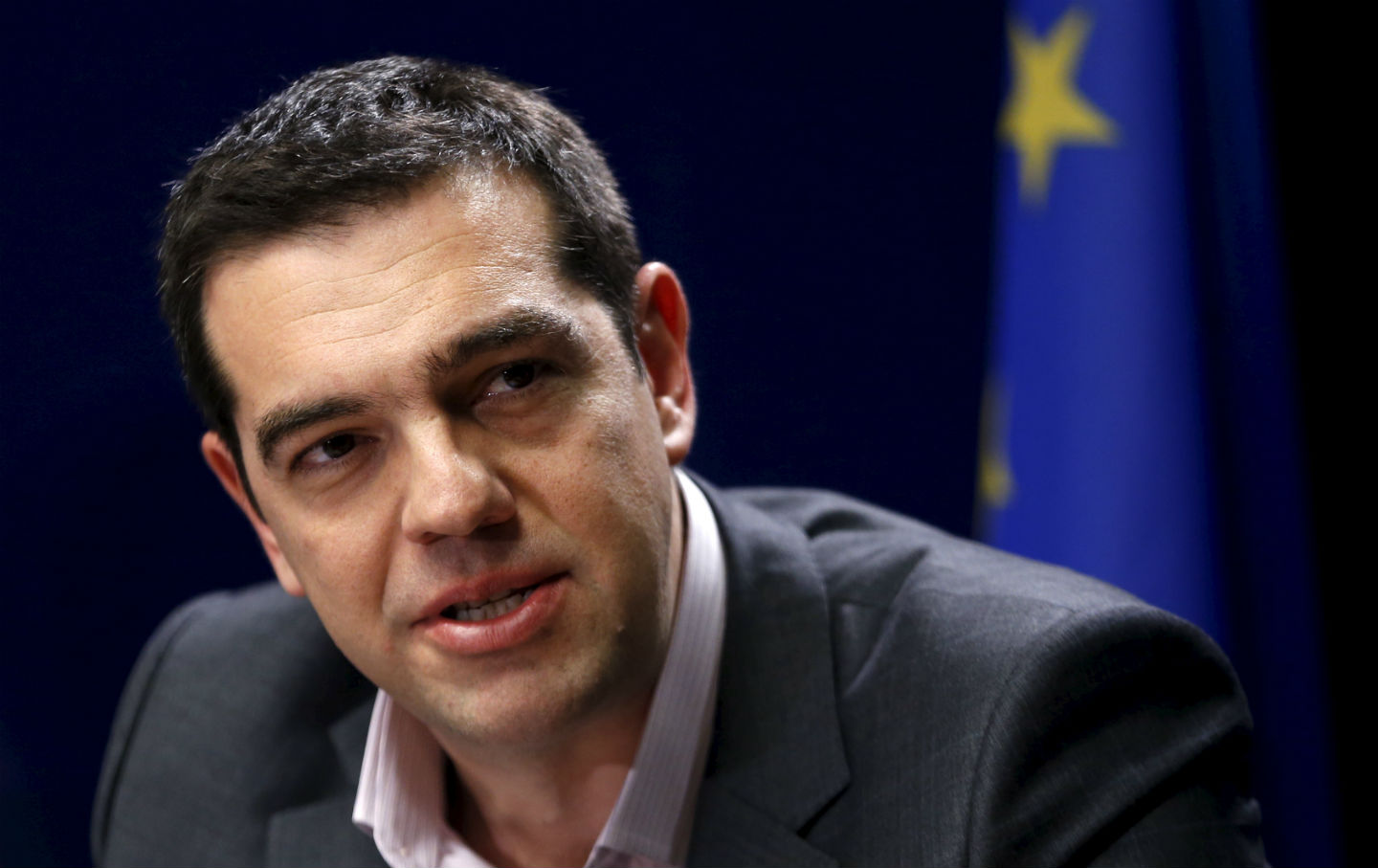 Greek Prime Minister Alexis Tsipras is in Moscow today to discuss gas prices, trade and investment with Vladimir Putin; Finance Minister Yanis Varoufakis recently left Washington, where he assured the IMF’s Christine Lagarde that Greece will make a loan repayment due tomorrow and discussed with her the Syriza government’s proposed reforms. A symmetrical shuttling, you could say, beyond the EU’s borders; a reasonable hedging of bets at a critical moment for Greece; an assertion of agency. But reading the Anglophone press, you might think the Greek government was about to default on its IMF loan, print drachmas, call snap elections, thumb its nose at Europe, and sell its soul to Putin for a fistful of roubles.

A fog of disinformation surrounds Greece’s ongoing negotiations with its creditors to unblock 7.2 billion euros of loan funds, without which the government is likely to run out of money in weeks (or months—this too is unclear). An April 5 piece in Financial Times, based almost entirely on blind quotes from “senior official[s]” and eurozone finance ministers, suggested that an agreement will only be possible if Syriza ditches its elected left-wing MPs and forms a coalition with two center-left parties, the discredited Pasok and newly created Potami. In The Daily Telegraph three days earlier, Euroskeptic journalist Ambrose Evans-Pritchard cited unnamed sources “close to the ruling Syriza party” to claim that Greece was about to nationalize the banking system and introduce a parallel currency. This fog is swallowed and recycled by Greece’s private TV channels, bought hacks and politicians. The effect is to spread confusion and mistrust, threatening the already tremulous negotiations, the Syriza government and what’s left of European cohesion.

Of the reform proposal Syriza has submitted to the Eurogroup, a twenty-six-page document leaked by Financial Times, there’s barely any discussion. But the text bears reading. The longest section, on taxation, spells out how the government plans to increase its revenues and end tax evasion; though the figures may be optimistic, it’s a serious start. The chapter on labor market reforms quietly makes the economic case against austerity and argues that growth requires fair wages and protection of workers’ rights. Acknowledging that undeclared work has long been a problem in Greece, it points out that it’s “risen alarmingly” in the last four years: you can’t collect taxes from people who can’t make ends meet. The deregulation of collective bargaining—which effectively cancels collective wage agreements by letting employers opt out of them—has further depressed the economy. So has the reduction of the minimum wage: “The unprecedented reduction in labour income had decisive (multiplier-accelerator) knock-on effects on aggregate demand and growth.” No pay, no taxes, no spending, no growth: it’s hardly a radical argument. Christine Lagarde herself admitted two years ago that the program in Greece had failed. And yet labor market reform is one of the major sticking points in the Greek government’s negotiation with the lenders, along with further pension cuts and the privatization of state assets, which according to the Greek government has so far brought in only 2.6 billion euros, though the EU and IMF predict an income of 22.3 billion by 2020.

The relentless hum of intrigue and speculation serves to obscure all this, as well as the power imbalance between Greece’s elected government and the unelected eurozone and IMF officials who hold its fate in their hands. Syriza shares some responsibility for the information chaos: its politicians contradict each other and sometimes themselves, as if they thought European officials couldn’t hear or understand what’s said for domestic consumption. Instead of clarity they often choose constructive ambiguity and overdetermined gestures, which may seem clever but get up the northerners’ noses.

Tsipras’ trip to Russia is a perfectly reasonable move; as the Greek government points out, Italy’s Matteo Renzi made the same journey recently. The plan is to strengthen economic and commercial ties and discuss lifting Russia’s embargo on Greek food exports (in response to EU sanctions over the Ukraine): Greece used to provide 40 percent of Russia’s strawberries and a quarter of its peaches. Russian companies have also expressed an interest in some Greek assets, which ought to please the privatization enthusiasts. But Syriza’s demurral from the EU’s decision to extend sanctions against Russia the day after its election set alarm bells ringing; despite assurances of Greece’s commitment to the EU and NATO, the anxiety lingers. Putin is grasping for wedges to widen the splits in Europe. And the timing is tricky: Tsipras’s visit has been moved forward by a month. Will it help to concentrate European minds, a silent, salient reminder of the importance of unity? Or will it play as a slap in the face to the “partners” Greece needs to appease?

Given the creditors’ apparent determination to squeeze Syriza till the pips squeak while also insisting they want to hold Europe together, the answer is probably both. And from Tsipras’s point of view, there’s very little to lose. Greece is still in a desperate crisis; the eurozone finance ministers seem blind to what might follow if the country is pushed to the brink and the Syriza government fails. Geopolitics, as the US State Department knows, is one of the strongest cards he has.

The Syriza government faces pressures internally as well as from the institutions formerly known as “the troika.” It’s beginning to challenge the power of the Greek oligarchs by going after tax evasion and announcing that the owners of private TV channels, pampered in goose down by their former political patrons, will have to pay serious money to keep their frequencies. After years in opposition, it’s having to face the realities of power as it argues over how to deal with a series of occupations by supporters of anarchist prisoners now on hunger strike. Every slip, every hint of wrongdoing by one of its ministers is met with roars of Schadenfreude from opponents eager to undermine its legitimacy. As various nooses tighten, there’s a risk that Syriza will try to feed popular hunger for revenge on the old politicians: the launch of a committee to investigate how Greece entered the memoranda provoked ugly scenes in parliament this week, with Tsipras crowing over his cornered opponents. Syriza in power is, in many ways, erratic and unprepared. But why would anyone expect it to be otherwise?

This government was born out of a monstrous crisis; its midwives were the European Commission and the IMF. It is by definition a rough draft, an attempt to build out of ruins, to begin again. Having created the conditions that produced it, the EU and IMF are now doing everything they can to strangle it in its cradle. Yet the party’s support is higher now than it was at the election. Most Greeks have had it with politesse, corruption and hypocrisy. People like it that Syriza can be shocking, brash, unmannerly—it feels more real to them, a response in keeping with the violence they’ve lived. And they can see that, for all their inexperience, most of its ministers and MPs are struggling in good faith to pull Greece out of disaster, against an overwhelming array of internal and external forces. Things have been difficult so far, but there’s still a chance that Syriza might be able to meet both parts of its mandate—to stay in the eurozone and end or mitigate austerity—or at least buy time to try. Those unnamed European officials dreaming its demise should know that much worse alternatives are waiting in the wings.