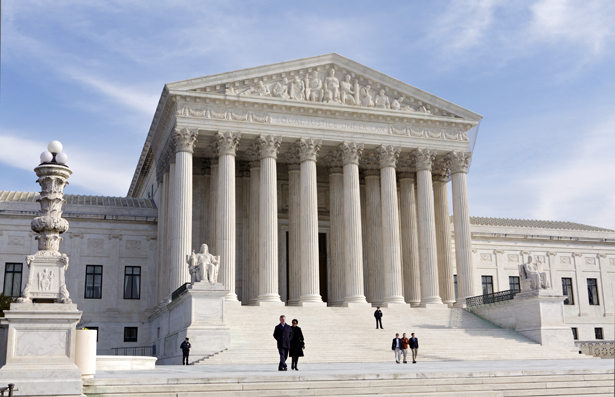 President Obama overstepped his power when he named three people to the National Labor Relations Board at the end of 2011, the Supreme Court decided unanimously on Thursday.

Here’s the background: since 2009, Senate Republicans undertook routine obstruction of President Obama’s appointments by wielding a filibuster that required sixty votes to break. They did this against all sorts of nominees, for offices big and small; in some cases, Republicans didn’t even bother to claim a substantive problem with the nominee. The only criteria for a filibuster, at times, seemed to be that Obama nominated that person.

One area where this was extremely problematic was the National Labor Relations Board—three members had their five-year terms expire in 2012, and Senate Republicans filibustered Obama’s replacements. With three empty seats, the NLRB would not have a quorum to function, and the practical effect would be that US labor law would no longer be enforced. (It’s not hard to see this as the GOP’s goal here).

The White House didn’t want this to happen, and Obama contemplated and ultimately made “recess appointments” to the three seats.

The law around presidential appointments during recess has historically been vague. Article II, section 2, clause three of the Constitution grants the president “power to fill up all vacancies that may happen during the recess of the Senate, by granting commissions which shall expire at the end of their next session.” That was a sensible clause for an era when it could take weeks for Congress to return to Washington via horse and buggy—if the war secretary died of tuberculosis, it would not be practical to wait that long to confirm a replacement.

In the modern era, how should that clause be interpreted? Presidents began making recess appointments when the Senate gaveled out of session, even for a few days, which was clearly within the letter of the law, though probably not the original spirit. That was legally fine—even three Supreme Court members were appointed in that fashion.

In the aughts, to prevent President Bush from placing un-confirmable nominees into office when the Senate broke for recess, Senator Harry Reid devised a strategy to hold “pro forma” sessions every three days. This consisted of a senator coming to the floor when everyone else was out of town, gaveling the Senate into session, and then right back out. As a technical matter, the Senate was always in session, and the president could not make recess appointments.

Republicans later adopted this strategy, but Obama—bolstered by a lower-court ruling that those pro forma sessions were not legitimate—decided in late 2011 to issue three recess appointments to the NLRB to keep it functioning in late 2011 in the midst of some pro-forma sessions. This is what is at issue in Thursday’s case, NLRB v. Canning.

The administration urged the justices to look at the practical matter here: the Senate was not really in session in any true sense, and the pro-forma sessions every three days were an obvious ploy by Republicans to prevent recess appointments.

In our view, however, the pro forma sessions count as sessions, not as periods of recess. We hold that, for purposes of the Recess Appointments Clause, the Senate is in session when it says it is, provided that, under its own rules, it retains the capacity to transact Senate business. The Senate met that standard here.[…]

The Solicitor General asks us to engage in a more realistic appraisal of what the Senate actually did. He argues that, during the relevant pro forma sessions, business was not in fact conducted; messages from the President could not be received in any meaningful way because they could not be placed before the Senate; the Senate Chamber was, according to C-SPAN coverage, almost empty; and in practice attendance was not required.

We do not believe, however, that engaging in the kind of factual appraisal that the Solicitor General suggests is either legally or practically appropriate. From a legal perspective, this approach would run contrary to prece­dent instructing us to “respect…coequal and independent departments” by, for example, taking the Senate’s report of its official action at its word. From a practical perspective, judges cannot easily determine such matters as who is, and who is not, in fact present on the floor during a particular Senate session. Judicial efforts to engage in these kinds of inquiries would risk undue judicial interference with the functioning of the Legislative Branch.

In effect, this ends all recess appointments by the president, except in a rare scenario outlined by the Court in which the House and Senate disagree about the congressional calendar.

What does all this mean? In the short term, not much: Obama withdrew those now-illegal appointments, and the Senate confirmed three others to the NLRB earlier last year. Democrats then undertook rules reform this year that eliminated the filibuster on non-judicial appointments. That removed any real need for Obama to make recess appointments.

But, should things go poorly for Democrats in November, the Senate will become Republican. If history is a guide, they will block any further Obama appointments almost as a matter of reflex. And now recess appointments will be out of the question.

The long-term implications for organized labor here are also dire, as Ian Millhiser at the Center for American Progress has been relentlessly pointing out. The three seats in question here have terms that expire in 2018.

So: imagine a scenario in which Republicans hold the Senate in 2018, and refuse to confirm a Democratic president’s nominees to the NLRB, even if they are entirely noncontroversial. There will now be no recourse, and the NLRB will go dark.