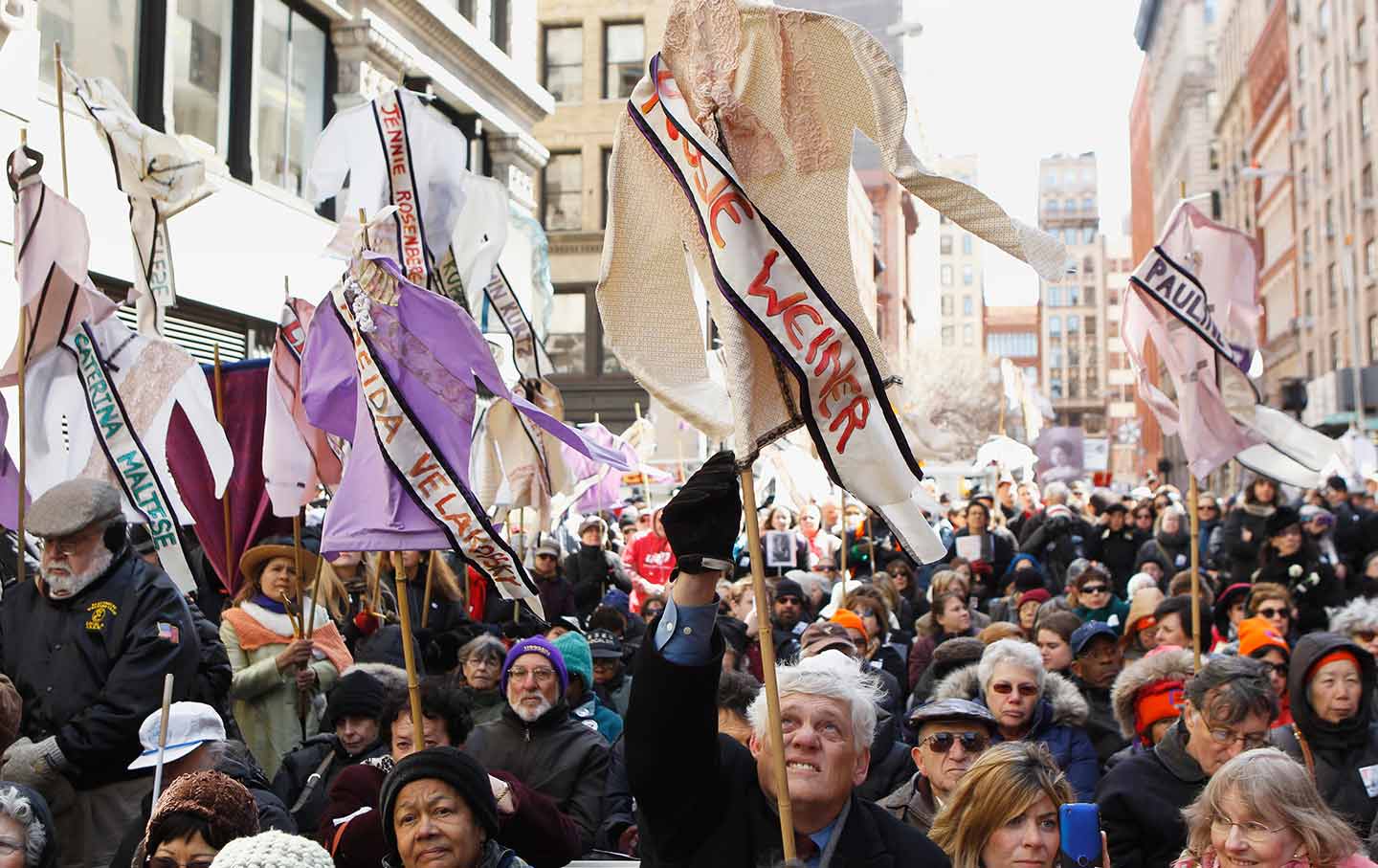 Members of the audience hold shirts with the names of victims of the Triangle Shirtwaist fire aloft as they listen to speakers during a ceremony to commemorate the 100th anniversary of the disaster in New York March 25, 2011. (Reuters / Lucas Jackson)

In her recent op-ed for Elle, Sady Doyle asks the important question, “What does it mean for women to go on strike in 2017?” She argues that because increasing inequality among women since the 1970s has given certain women better access to education and job security, participation in a women’s strike is a privilege as opposed to a coherent political project. In the 1970s, she argues, secretaries and housewives could unite around a common project of making their care work visible. Now that the doors to traditionally male jobs have been opened to women, Doyle calls for a kind of guilty, stagnant solidarity of intention, aptly summarized by the title; “Go Ahead and Strike, but Know That Many of Your Sisters Can’t.”

(Is it possible for feminism to be too inclusive?)

To what extent is the present call for a Women’s Strike on March 8 actually a less coherent project than its 1970s counterpart, or any previous women’s strikes? Our present situation is in some ways closer to the situation in 1908, when the first women’s strikes were led by the International Ladies Garment Workers Union. Unions were virtually nonexistent then, to say nothing of the brutal working conditions that resulted from their absence (146 people, mostly women, died in the Triangle Shirtwaist Factory Fire of 1911). Union membership today is at a historic low (10.7 percent and decreasing in 2016). Was it a privilege for garment workers to strike then? Would it be a privilege for us to strike now?

To the extent that Doyle calls for a redefinition of women’s work for a contemporary feminist movement, we agree that she raises an important question. Fortunately, the answers to some of those questions are already being formulated by exciting new forms of women’s and labor organizing. As part of the Women’s March on January 21, 2017, the National Women’s Liberation called for a strike of paid and unpaid work, from gender roles, and form the myriad expectations placed on feminized people in daily life. A diverse group of women inaugurated the movement for a 2017 strike with their feet and faces, and explained why:

I worked like a mule. Job as a nurse resulting in 2 serious injuries. 3 kids. All the laundry, housework, cooking, No help from the kids father, husband of 22 years. Left because of emotional abuse.
V.H., Florida

I’m signing the pledge in memory of my mother and all the hard work she did to raise her family. Her work was working in the fields on her knees in the hot Fla. sun who told us not to work when the boss failed to bring drinking water. This was my first lesson in striking for what’s right!
– L.T., Oregon

A lot of women from my office actually came to our meeting last week, but my first thought about this was, OK, I could probably not go to work, but no-one would necessarily notice. Until I realized all of them were saying, “let us know about that strike.” So, OK, I have ten women already at work, my boss is going to be pissed when all of us don’t show up. So that made it feel more real.
– A.

Recently, many women have used their power as workers, paid and unpaid, to resist. Hundreds of women have organized, and thousands participated in, recent strikes and social movements to combat police brutality and attacks on immigrants, often at great personal risk. It’s well known that queer black women played the central role in building Black Lives Matter as a national force. Last September, brave women in multiple facilities participated in prison strikes through the Incarcerated Workers Organizing Committee . The Standing Rock Water Protectors have dramatically fought the invasion of the Dakota Access Pipeline into indigenous lands, and are led by women. On February 13, as many as 10,000 immigrants rallied in Milwaukee—a demonstration led by women—walked off the job for a local “Day Without Latinxs, Immigrants, and Refugees,” which was followed by striking workers and students across the country on the February 16 “Day Without Immigrants.” These demonstrations hark back to the General Strikes of 2006, where hundreds of thousands of women participated in that year’s Day Without Immigrants, one of the largest strike actions in US history. A large number of those strikers were women working in precarious jobs and with few legal protections.

Some of these leading actions are more localized. Workers at New York City’s Babeland recently organized and won a union contract last week with a campaign led by trans women and other queer workers. At a recent organizing meeting for the Women’s Strike in New York City, one of the women who led the Yemeni Bodega Strike was in attendance. Those strikers have since endorsed the call for a March 8 Women’s Strike.

Given that so many women with so much to lose from striking are already doing so, perhaps instead of asking what it “means” for women to strike, we should ask, “How can we make it possible for more women to strike or keep striking?”

The International Women’s Strike call to action lists a wide range of ways to participate in the global strike, from refusing to smile at work and on the street, to wearing buttons, to walking out of work. Strikers themselves tell us how to move from a small action to a more dramatic one: host a meeting of coworkers to discuss work and the strike; and new suggestions might arise.

Female organizers (cis and trans, of course) have shown that we don’t have to strike alone. Women involved in immigrant strikes, for example, have spent years building worker centers that not only provide support for those combating rights violations at work, but provide legal support and education, and host community events. The idea behind this strategy is that social isolation enables the exploitation of their labor. Community building in these centers embolden women workers to demand a more fair share of the value they produce, better conditions, and a life worth living. All of these activities provide the foundations for the kinds of confidence and solidarity that enable women’s mobilization.

Smaller mobilizations and community-building activities, in turn, build the networks needed to raise those actions to the level of the general strike where “all the workers in every industry in a country, or perhaps in every country…cease work,” to quote Doyle quoting Engels. We see this in the case of teachers participating in March 8 who are also union members and advocates for better education. Strikers and organizers are making use of the networks and organizations they are already part of to build the strike, and making use of the strike to build those connections.

But the question remains: Is the call for a Women’s Strike on March 8, and for mass women’s political activity in general, less plausible than in the past? If so, why? Doyle is right that inequality exists within the feminist ranks. Where women have joined the formal, paid workforce, they are subject to the same conditions as any other workers under capitalism: Work is stratified by differences in the value of their technical skills, but also their identities (white women workers make less than their white male counterparts, but more than black and Latinx women). But the strike calls need not reflect the interests of the most elite participants just because they can. Differences among women can be obstacles to strike action, or an opportunity for solidarity in action—organizing for the latter depends on us.

In its most insightful moments, Doyle’s essay asks us to consider how “the work of being female” varies among women, and how that work has changed since the Wages for (and Against) Housework campaigns of the 1970s. That difference, however, is easy to overstate. In the United States, especially, women have long done the kinds of waged, contractual work that has typically been coded “male,” with women of color far more likely to be pushed into such work. Similarly, working women of all kinds have not been much relieved of the burden of “reproductive” labor. Work that was once largely unpaid or informal, like housework, care work, sex work, health care, and education have increasingly moved into the realm of (poorly) paid labor—still done by women. And, to the degree that women have attained employment in previously male dominated fields, this is not always the harbinger of equality and progress it might at first seem. Instead, these professions often become feminized, stigmatized, and lower paid than the jobs still dominated by men. Over the last several decades, women have increasingly faced a “double shift,” as larger numbers of privileged women find themselves responsible for paid, feminized labor as well as the overwhelming majority of unpaid housework and childrearing.

While Doyle argues that organizing women has become more complicated, the social and economic locations of women individually and collectively have been a source of our power. Workers in industries that perform care work—mostly women—are often the first and most likely to strike in periods of austerity and social transformation. Because women occupy multiple family and work roles, we immediately experience the effects of economic austerity and right-wing policy that many of us have felt since before Trumps ascendance to power. And we are also in a position to mobilize multiple networks: families, communities, and co-workers. If some analyses of strategic “choke points” for strike action have dubbed shipping, trucking, and production as key sites, we might call women’s work a “social reproduction choke point,” existing at social crossroads that give its political mobilization extra force.

Doyle is also right to gesture toward the real disparate interests between, say, female CEOs, whose feminism is largely focused on individual advancement, and the majority of women who work. Womanhood cuts across class. Read generously, Doyle’s interrogation of what women’s work consists of reminds us not to center the experiences of upper-middle-class or bourgeois women: i.e., celebrating a Clinton victory, more women CEOs or the breaking of glass ceilings promoted by a certain brand “lean-in feminism.” As the Women’s Strike call to action reminds us, lean-in feminism has not served the majority of us even before the Trump election. It must also not become an opportunity to center the “women [who] have better access to education and high-paying jobs than ever.”

Strategizing for the future, in this case, requires confronting the past. We must understand that the figure of the “stay-at-home wife” or the secretary, popular feminist symbols of women’s oppression, by no means represent the entire experience of women’s work. On the contrary, for most of US history, the bulk of social reproduction has been carried out by indentured servants or slaves, free black and poor white women, and, more recently, poorly compensated and often abused immigrant women. Seen from this vantage point, our diversity is an asset with which to build a women’s movement with a multi-issue platform.

Women across the country have already shown us: Striking is not a privilege. Privilege is not having to strike.