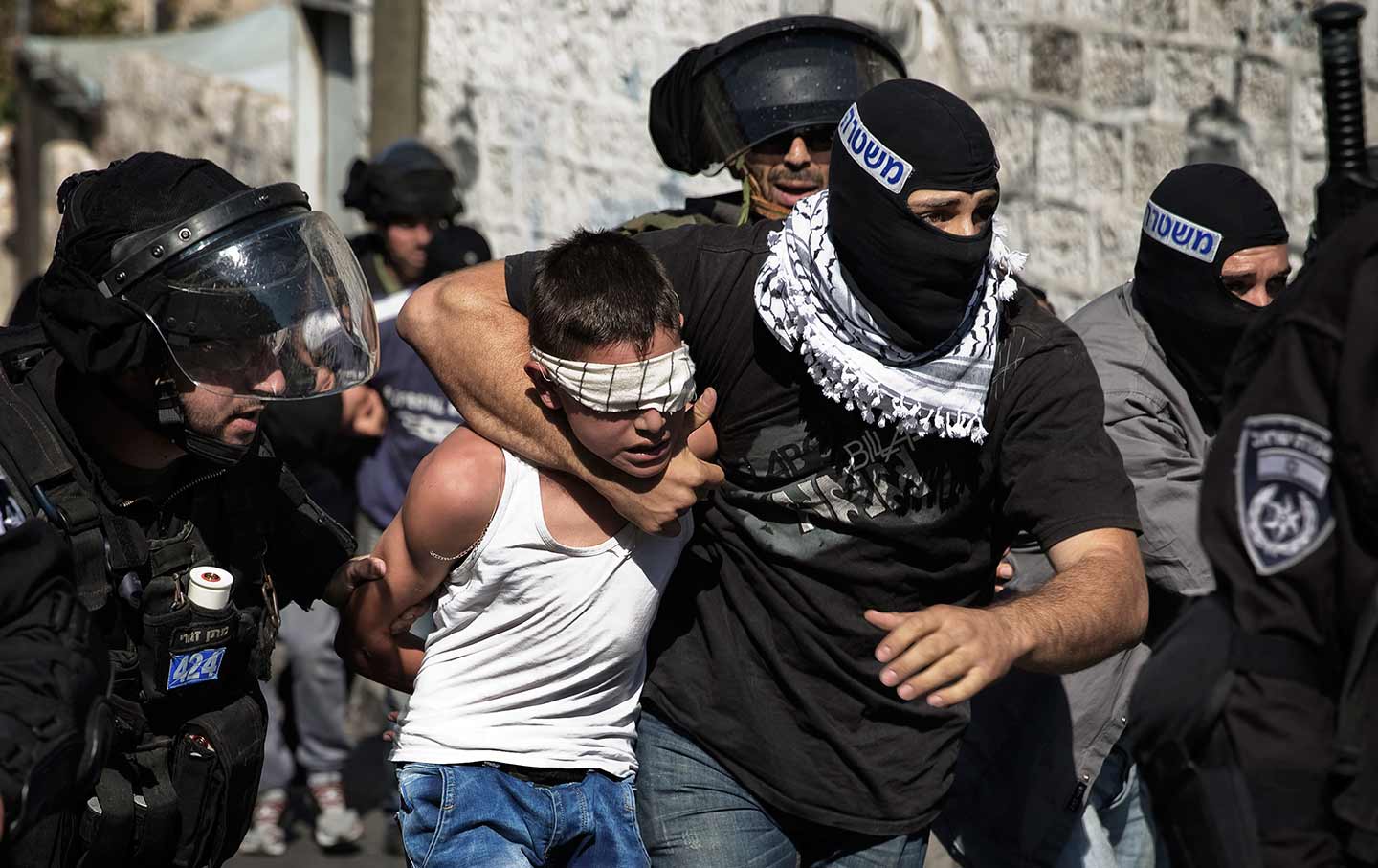 Today, to mark Palestinian Prisoners’ Day, about 1,000 prisoners have begun a hunger strike in protest against decades of arbitrary arrest and inhumane treatment. Approximately 6,300 Palestinians are currently held in Israeli prisons and detention centers, including 300 children.1

In 2014, as part of a National Lawyers Guild delegation to Palestine, we met with a young Palestinian boy from the village of Beit Ummar near Hebron in the occupied West Bank. Mohammed, 15, described his arrest by the Israeli occupation forces, transfer to three different detention centers, time in solitary, and eventual release three months later after a confession for stone-throwing was extracted from him under torture. Since his release, he had picked up smoking and quit school because he would have had to repeat his previous grade as a result of his absence for three months.2

Mohammed is not alone. After release from detention, many children exhibit signs of PTSD, nightmares, behavioral changes, and loss of interest in school. Some will have to repeat grades and some will quit school.3

Since 2012, Israel has held about 200 Palestinian children in custody each month.

Children are often coerced into signing confessions in Hebrew without understanding the language or content of the statement. The most common charge for children is stone-throwing, which carries a maximum sentence of 10 to 20 years.5

Oftentimes, arrest and imprisonment are used as retaliatory tactics aimed at countering youth activism or as a means of retribution against older family members. To take just one example, Hamza Hammad was held in administrative detention (a tactic often used by the Israeli military of keeping Palestinians in prison without charge or trial) for 10 months. At 16, he was the youngest Palestinian held in administrative detention and had been detained since February 28, 2016. He was arrested at 2 am, when the Israeli military raided the family’s house after blowing up their front door. He had previously been arrested as well and subjected to torture.6

Israel is the only country that systematically prosecutes between 500 and 700 children per year in military courts.

Israel has two separate legal systems in the West Bank, depending on whether the person is a Palestinian or a Jewish settler. Military law has applied to Palestinians in the West Bank since 1967, which means this year marks 50 years that they have lived without freedom, equality, or basic rights. Meanwhile, Jewish settlers—occupying Palestinian land in violation of international law—are subject to Israel’s civilian legal system. According to the US State Department, military courts have a more than 99 percent conviction rate for Palestinian defendants. Israel is the only country that automatically and systematically prosecutes between 500 and 700 children per year in military courts. According to the UN Children’s Fund (UNICEF), mistreatment in the military detention system is “widespread, systematic, and institutionalized throughout the process.” 7

Defense for Children International Palestine (DCIP) collected over 400 affidavits from detained children between January 2012 and December 2015 (watch a video on the report here). Three-quarters suffered some form of physical violence following arrest. Stress positions (seating children in low metal chairs just inches off the ground during prolonged interrogation sessions, while often shackling their hands and feet to the chair too), threats, and isolation were used to coerce confessions from some of these children. Sixty-six children were held in solitary confinement for an average period of 13 days. Roughly half the children reported denial of basics such as food, water, and access to a toilet. Ninety-seven percent had no parent present during interrogation or access to legal counsel. The great majority were not adequately informed of their rights. Many were transferred on the floor of military vehicles.8

Treatment of children by Israel runs counter to international human-rights law and international humanitarian law, which mandates that countries have a distinct juvenile-justice system that recognizes the special status of children, protects minors from violence, and focuses on rehabilitation and reintegration.9

The presidency of Donald Trump is already changing for the worse the landscape around the Palestinian people’s right to self-determination, as we saw with the Israeli Knesset’s recent passage of a law retroactively legalizing settlements on privately owned Palestinian land. Now confident that it has a true supporter in the White House, the Israeli government is unlikely to end its systematic human-rights violations, including those against children. In fact, a report commissioned by the UN recently characterized Israel as having established an apartheid regime.10

The situation on the ground could get even grimmer for the Palestinians in the absence of a sustained international movement to bring to light the abuses and pressure the Israeli government through tactics such as the Boycott, Divestment, and Sanctions (BDS) movement.11

On this Palestinian Prisoners’ Day, what can we as Americans do to help protect the rights of Palestinian children and all Palestinians? One is advocating for the appointment of an ombudsperson to monitor the situation of Palestinian children. Twenty members of Congress sent a letter to President Obama this past summer urging him to appoint a special envoy for Palestinian youth. The other is freezing military aid to Israel. Rather than holding Israel accountable for its violations of international law and human rights, the United States has agreed to give Israel $38 billion in military aid over the next 10 years, the largest sum ever. And we should continue to support efforts to hold the Israeli government accountable through BDS and other means. 12

Israeli Prime Minister Netanyahu should know that while he may have a friend in the White House, the American people will not stand for the abuses committed in our name.13