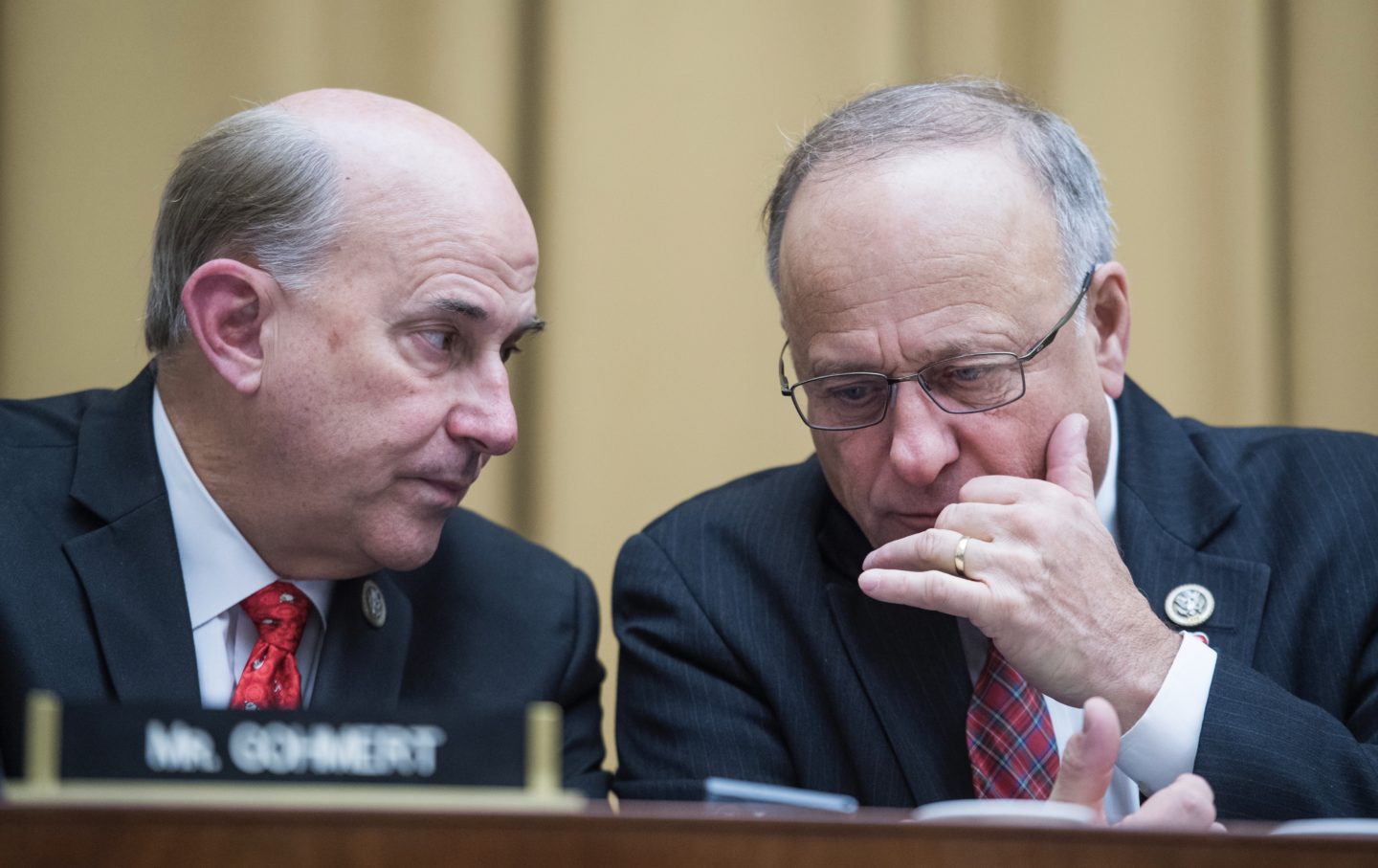 Republicans should be awarded no points for calling on Iowa Congressman Steve King to resign. Pointing out that this racist misogynist has no business serving in Congress is like pointing out that you shouldn’t make toast in a bathtub. It doesn’t mean you are insightful; it means the people who disagree with you are enfeebled.

King should have been drummed out of office a long, long time ago. But this week’s controversy is particularly odious. The Des Moines Register reports that King made his now infamous comments while trying to defend his religious fundamentalist position that abortion should be banned, even in cases of rape or incest. “What if we went back through all the family trees and just pulled those people out that were products of rape and incest? Would there be any population of the world left if we did that?” he said at the Westside Conservative Club meeting in Urbandale, Iowa. “Considering all the wars and all the rapes and pillages taken place and whatever happened to culture after society? I know I can’t certify that I’m not a part of a product of that.”

The statement is so offensive it wraps all the way around to farce. The guy is out there suggesting that female reproductive autonomy threatens the survival of the species. It is impossible to take seriously a person who thinks Flowers in the Attic is a story about the triumph of human evolution, and if he weren’t an actual member of Congress, nobody would.

King is what scientists call “a fool.” He says absurd things in ridiculous ways using evidence that is demonstrably false. I don’t want to waste time resurfacing every shockingly bigoted or sexist thing this man has said in public life, so just Google him. The New York Times is going to have to update its “Timeline of Steve King’s Racist Remarks and Divisive Actions” to add this latest Viking-rape apologist thought bubble.

Given this long and flagrant record, calling out a vapid knuckle-dragger like King is the easiest thing in the world for Republican politicians and media makers to do. It costs them nothing. And so, at this very moment, they are making the consequence-free virtue-signal of calling on King to resign.

That’s a problem, actually. King’s Republican co-conspirators are trying to distinguish the unwashed bigotry and misogyny of King from their own, when the only real difference is that Republicans usually use a can of Axe Body Spray before they go outside.

This headline in the Washington Examiner (for the uninitiated, the Washington Examiner is to Fox News as crack is to cocaine) says it all: “Steve King should go back where he came from.” You see what they did there? The Examiner used one of the most racist statements of Donald Trump’s entirely racist presidency—the one he deployed against four congresswomen of color—but now they’re using it against a white man so they can argue that the sentiment is not racist. They’re using it to try to draw a false equivalency between King and “the Squad,” which is bad enough. But they’re also trying to isolate King, outside of mainstream conservative thought, which is just not true. (Hello, Alabama!)

Or take Liz Cheney. Cheney is the third-highest-ranking representative on the Republican side. She tweeted out:

Today’s comments by@RepSteveKingIA are appalling and bizarre. As I’ve said before, it’s time for him to go. The people of Iowa’s 4th congressional district deserve better.

Liz Cheney defended Donald Trump when he made those “send them back” comments about the Squad, saying that somehow they weren’t about race. She’s called Representative Ayanna Pressley “racist,” and is apparently willing to throw her own lesbian sister under the bus to gain higher office.

There’s no meaningful difference between Liz Cheney and Steve King. If I put Cheney’s voting record against King’s, you wouldn’t be able to tell them apart. Humanitarian standards for the Border Patrol: nay. Reauthorizing the Violence Against Women Act: nay. Condemning Trump’s racist comments: lol, nay. Both of them even voted for the bill reprimanding Steve King. They’re both examples of what the mainstream Republican Party has become—it’s just that King likes to say the quiet part aloud.

What we’re seeing here is part of the GOP effort, aided by the media, to define racism or sexism or homophobia as something extreme and unhinged, as opposed to something common and integrated into our society. Republicans (along with many Democrats, frankly) don’t want to deal with the structural impact of white supremacy as practiced in this country for 400 years. They just want to label white supremacists as “fringe” figures who are “not actually a real problem,” as Tucker Carlson said. They don’t want to deal with the moral implications of forcing a woman to have her body hijacked for nine months, against her will, because she’s been the victim of a violent crime. They just want to throw up draconian abortion bans and institute fetal-personhood amendments but pretend like Kevin Williamson is a little wacky.

Republican politicians will be the first ones to decry political correctness when one of their racist flock gets zapped on Twitter for promoting hate speech, but the only kind of bigotry and misogyny they’re willing to acknowledge is the kind based on words, instead of actions. You can get Republican pols to furrow their brows and say, “I wish the president wouldn’t tweet so much.” But you can’t get them to do anything about the president’s policies of dehumanizing immigrants, terrorizing black and brown communities, suppressing the votes of nonwhite citizens, or erecting a wall to stand as a monument to his bigotry. No, they’d much rather go after King for saying something stupid about white nationalism than vote against the policies of white nationalism. They’d much rather go after King for saying something stupid about rape than go after Brett Kavanaugh for allegedly trying to rape somebody.

Asking Steve King to resign, but not Donald Trump, is a Republican strategy for normalizing Donald Trump. Trump is the bride to white nationalism; King is just the bridesmaid being asked to wear the ugly dress.

Donald Trump and the Plot to Take Over the Courts

Steve King is no gaffe machine; he’s just dumb. And he harms the causes he pretends to support.

If you’re willing to call Steve King and Donald Trump “racist” but not Liz Cheney and Mitch McConnell, all you are doing is allowing white Republicans to define that term for you. If you see that King and Trump are rape apologists but can’t see the same problem with Lindsey Graham and Brett Kavanaugh, then you’re just in it for the word games and not the struggle for equal rights.