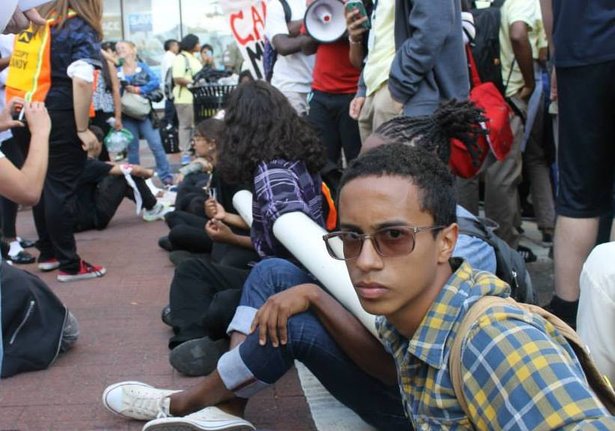 Last spring, The Nation launched its biweekly student movement dispatch. As part of the StudentNation blog, each dispatch hosts first-person updates on youth organizing. For recent dispatches, check out August 12 and August 29. For an archive of earlier editions, see the New Year’s dispatch. Contact studentmovement@thenation.com with tips. Edited by James Cersonsky (@cersonsky).

In Newark, the school administration has blatantly ignored students and community members and force-fed us a corporate plan, “OneNewark,” which disguises itself as a means of giving students more school choices while eliding our lack of funding, accountability from the state and the voices of students. In response, the Newark Students Union organized a two-day boycott, demanding Superintendent Cami Anderson’s immediate resignation, a halt to her OneNewark plan and full local control of our schools. On September 10, we shut down Broad Street, the busiest street in New Jersey’s biggest city, laying down and chanting for nine hours—and enduring hostility and an injury from police. Until our demands are met, we will escalate our actions—with the hope of creating change that ripples across the country.

2. The Future of Academic Freedom

On September 11, six weeks of organizing at the University of Illinois at Urbana-Champaign came to a head as Steven Salaita, whose appointment to the American Indian Studies faculty was revoked by UI’s chancellor on August 1, allegedly due to criticism of Israel’s invasion of Gaza on Twitter, was further rejected by the UI board of trustees. Hundreds of students and faculty from across the Midwest gathered at the board meeting and delivered public comments demanding the board uphold the university’s principles of academic freedom and diversity. While one trustee broke ranks, a majority vote upheld Salaita’s firing. Following the meeting, supporters rallied across campus, demanding the reinstatement of Salaita and mobilizing university workers to unionize. The case of Salaita—a professor with little job security—has sparked joint pressure from the labor and social justice movements on the UI administration.

3. The Weight of Sexual Violence

On the first day of the fall term, Columbia University senior Emma Sulkowicz began carrying a dorm mattress with her everywhere she went on campus, and will continue to do so for as long as she and the male student she says raped her both attend Columbia. This action, Mattress Performance: Carry that Weight, comes in the wake of a Title IX complaint filed against Columbia by twenty-eight students, federal investigations of more than seventy-five colleges for the way they handle sexual violence cases and expansive media coverage of Emma’s ordeal. In response to Mattress Performance, students at Columbia University have begun organizing collective carries of the mattress to support Emma and all survivors of sexual violence on campus. Carrying the Weight Together held the first collective carry on Wednesday, September 10, and plans to hold further carries for the duration of Mattress Performance. On September 12, students held a speak out and rally, Stand with Survivors—and brought our mattresses as a show of solidarity.

On September 5, Florida State University students and faculty were removed, with students threatened with arrest, for reading aloud a call to restructure FSU’s Presidential Search Advisory Committee. The following week, arrest threats continued for students who clapped or snapped during PSAC meetings. Our purpose has been to call out the current two-thirds majority of corporate representatives on the committee, including five members tied to the Charles Koch Foundation or ALEC. In May, PSAC motioned to fast-track State Senator John Thrasher, a Koch -funded legislator, without an application; this month, its vice chair threatened graduate assistants with arrest and funding cuts for distributing anti-Thrasher literature. Throughout this fight, students have spoken up about links between ALEC, PSAC members and recent revelations of the Kochs’ corrupt influence over hiring and curriculum at FSU; multiple faculty have threatened resignation; and FSU donors are withholding support.

In November 2013, following a series of faculty firings, the Burlington College student government was voluntarily dissolved by students and replaced with a student union—which has been steadily building power. On August 29, thirty Burlington College Student Union members attempted to enter a board of trustees meeting to deliver a vote of no confidence in the school’s president, Christine Plunkett—but the door was shut in our face. Under Plunkett, Burlington College has used money from a memorial scholarship fund on operating costs, been put on probation by accreditors due to financial concerns and withheld employee retirement funds. Following the meeting, students surrounded Plunkett’s car and demanded her resignation. She responded, “Ok, I resign. Happy?” She was replaced in three days—with no input from faculty or students—by a board controlled by commercial real estate developers. The presidential transition team includes a city councilor who helped gut Burlington’s livable wage ordinance and the former Vermont head of a regional telecom facing a strike for labor abuses.

On Tuesday, September 9, dozens of community members rallied in front of the Federal Building in downtown Los Angeles to “Restore TRUST for 3,” highlighting the cases of Samuel Sixtos, Wilman Exady Juarez and Sergio Flores, all of whom have been imprisoned in violation of California’s TRUST Act. Both Samuel and Wilman are being detained in Adelanto Detention Center, while Sergio has had weekly visits by ICE officials. After a five-day hunger strike, Samuel was placed in solitary confinement; in August, personnel at Adelanto assaulted Wilman, threatening that further media attention to his case would lead to his deportation. Just as deferred action has helped thousands of immigrant youth avoid deportation, executive action from Obama—delayed September 6—could have done the same for the families of Samuel, Wilman and Sergio. On September 19, the Immigrant Youth Coalition, RAIZ and advocates from across the state will gather to strategize next steps to fight every deportation—with or without executive action from the White House.

On September 5, the Black Student Alliance at the University of Virginia gathered students, faculty, staff and Charlottesville community members to the steps of Old Cabell to rally against police brutality and media misrepresentations of black and brown people. The rally began with a rendition of “Lift Every Voice and Sing,” followed by a march across the university’s historic Lawn and Academical Village with words, poems and chants from students and community speakers, including “No Justice, No Peace!” and “Black Lives Matter!” At many stops, the crowd paused to observe a moment of silence and a reading of the names of slain, unarmed victims—Ezell Ford, Dante Crawford and Eric Garner, to name just a few. In coalition with student and community groups, we have begun to facilitate solution-driven dialogues to police brutality, among other issues, with the aim of implementing our ideas with local police.

On September 5, more than 300 undergraduate and graduate students, faculty and campus workers from the University of Massachusetts, Amherst, rallied to demand fair contracts for all university staff. The rally was organized by UMass Unions United, a coalition of five unions—representing graduate student-workers, facilities and custodial staff, faculty, librarians and administrative staff—all currently negotiating new contracts. The coalition coalesced over the summer as we recognized common challenges at the bargaining table—ranging from slow progress to concessionary demands to pat rejection of union proposals—as well as common goals, including fair wages, the preservation of professional rights, improved job security and adequate protections against overwork. Concurrently, members of the Graduate Employee Organization, a member-led, social justice union, has organized in solidarity with an emerging anti-racist movement on campus, which convened 100 people for a speak-out and march to protest Michael Brown’s murder, and the Western Mass Coalition for Palestine, which has held weekly actions in downtown Northampton and is organizing a community teach-in on September 27.

9. A New Movement for Democracy

From Massachusetts to California, student workers are not only unionizing, but reforming their unions around issues of democracy and social justice. Inspired by these bottom-up efforts, members of the recently recognized Graduate Student Organizing Committee of the UAW have formed NYU Academic Workers for a Democratic Union. As GSOC-UAW enters into a second semester of contract negotiations with the university, NYU AWDU, which is running a slate of progressive candidates for union office, is committed to fighting for comprehensive healthcare coverage for all workers and their families, raising wages—especially for NYU-Poly student workers, many of whom currently make $10 per hour—securing tuition remission for working master’s students, limiting ballooning class size and making the union’s operations more open to members. We believe substantive member mobilization and pressure is the surest way of obtaining a robust contract—while deepening solidarity with others fighting for social and economic justice, from domestic and fast-food workers to custodians on our own campus.

This month, Know Your IX, a national student campaign against campus sexual violence, is launching a Campus Action Network, a forum for activists to share tactics and narratives to build effective survivor-centered local campaigns. The idea is to provide a space for survivors to build national intercampus solidarity, identify and highlight common patterns of institutional betrayal and organize for state and federal policy changes to address those abuses. The Campus Action Network will work to hold schools and policymakers accountable and build a more inclusive movement centered on amplifying the voices of marginalized survivors. IX-CAN is supported by a broader network of allies working to empower and support us to end violence on our campuses.