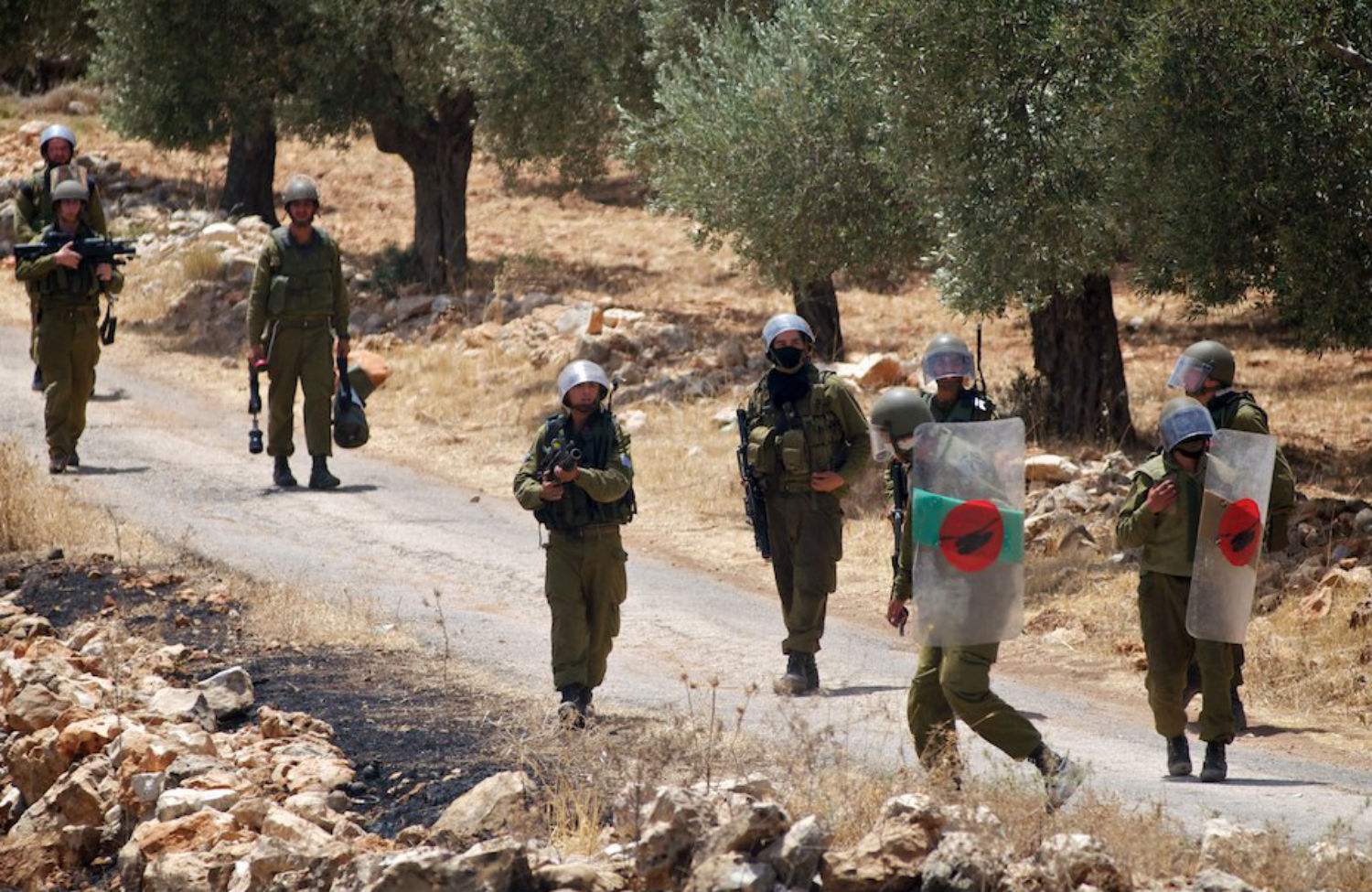 “Palestinian National Team” demonstrates against the Israeli Occupation on the advent of the World Cup (photo by Edo Medicks/ CC BY-NC-SA 2.0)

It’s World Cup season. But far from the favelas of Brazil, another drama is playing out in the annals of international soccer.

In an effort to bolster its global status, Israel has placed a bid to host the 2020 European Championship, known as Euro 2020. That means that one of the world’s largest international soccer tournaments might be coming to Jerusalem.

Hosting mega sporting events is an increasingly popular way for countries to build a positive international image, but it can also provoke criticism—as seen in Brazil, where the eviction of impoverished residents to make way for stadiums has prompted massive protests, as well as in Qatar, where the preparations for World Cup games have led to worker deaths and labor unrest. Israel, which has been accused of violently targeting Palestinian soccer players, is no exception.

The Euro is one of the world’s most competitive international soccer tournaments, second only to the World Cup. The winner is crowned the best national team in Europe, home to some of the strongest sides in international soccer. As the Arab boycott has precluded Israel’s participation in the Asian Confederation, Israel has been considered part of Europe’s soccer confederation since 1994.

To celebrate the sixtieth anniversary of the tournament, UEFA, the governing body of European soccer, has decided to depart from tradition. Rather than hold the tournament in one host nation as usual, UEFA has decided to choose thirteen host cities throughout the member countries. In September UEFA will select these cities from the existing nineteen bids. That makes Israel, which hosted the UEFA Under-21 European Championship in 2013, a strong contender.

But the Palestinian Football Association and Palestinian solidarity activists have already raised opposition to Israel hosting the tournament. A recent letter in The Independent—signed by Desmond Tutu and Alice Walker, among others—called for UEFA to leave Jerusalem off the list of host cities as long as “Israel continues to perpetrate its devastating military occupation of the Palestinian territories, flouts international law, totally disregards UN resolutions, and imprisons hundreds of Palestinians, including children, without charge.”

We like to believe that during large sporting events, like the Olympics or World Cup, political conflicts should take a backseat to what happens on the field—politics and sports, some say, don’t mix. But for Palestinian soccer players, separating the realms has proven impossible.

Since FIFA recognized the Palestinian national soccer team in 1996, Israel has mixed politics and sports in a lethal way, targeting Palestinian players, coaches and facilities. In ruthless attacks largely unreported in the United States, Palestinian footballers have been arrested, maimed and killed by the Israel Defense Forces. Thanks to Dave Zirin of The Nation, many of these incidents have been reported to wider audiences.

The most recent incident was last February’s brutal shooting of two young players, Jawhar Nasser Jawhar and Adam Abd al-Raouf Halabiya, at a checkpoint in the West Bank. Both players were severely injured, with one reportedly suffering ten bullet wounds to his feet—a strong indication that the Israeli soldiers knew that the teenagers were footballers and targeted them accordingly. When they attempted to return from Jordan, where they had received medical treatment, they were arrested without charge—a practice known as administrative detention.

These young players are hardly the only Palestinian soccer players to languish in administrative detention. Goalkeeper Omar Khaled Abu Rouis and talented striker Mohammed Sadi Nimr were arrested in 2012. Another national team star, Zakaria Issa, was jailed for allegedly being a member of Hamas in 2003. Sentenced to sixteen years, he was released after nine years because he had a terminal illness. The most famous incident of unlawful detention is the story of Mahmoud Sarsak, who was jailed for over three years. Despite never formally being charged with a crime, Sarsak was unable to communicate with friends and held in solitary confinement for much of his time in prison. After a three-month hunger strike Sarsak was released, but only after his plight came to the attention of FIFA and the world players’ union, FIFPro.

Other players have also fallen victim to violence. During Operation Cast Lead in 2008–09, three soccer stars, including one national team player, were killed within seventy-two hours of each other by Israeli missile strikes on their homes. Other attacks have targeted Palestine Stadium in Gaza, which was destroyed by Israeli forces in 2006, only to be rebuilt with FIFA funding after the international soccer association found that the attack was “without any reason.” Israeli explosives leveled the stadium once more in 2013, when the IDF again claimed that missiles were being fired from the field. FIFA has pledged to rebuild the stadium yet again.

Despite these hardships, the Palestinian team continues to play. Or at least, it tries to. The team has traditionally recruited players from the diaspora due to the difficulty Palestinians face in getting permission to leave the occupied territories. In 2007 the team was even forced to forfeit its first-round World Cup qualifier in Singapore after eighteen players were refused permission to travel by the Israeli government.

These incidents are not random, but suggest a concerted effort to target one of the prominent symbols of Palestinian nationhood: the national soccer team. By preventing the Palestinian team from participating in matches abroad or maintaining a stadium for home games, Israel is purposefully undermining Palestinian national pride and unity.

Politics by Other Means

Sports reflect political realities. But like any cultural institution, they can become tools for political agendas and violence. Like the soccer riots in post-Mubarak Egypt or the famed 1969 soccer war between El Salvador and Honduras, problems arise when soccer becomes a continuation of politics by other means.

The reflection of politics in soccer, however, adds meaning to the richest moments the game has to offer. In Spain, the annual meetings between Real Madrid and Barcelona, known as El Clasico, can’t be fully comprehended without an understanding of the symbolic importance of FC Barcelona in Catalan autonomy and the importance of Real Madrid to the Franco regime (a story Franklin Foer explains in his excellent book How Soccer Explains the World). Likewise, the Falklands Crisis of 1982 adds context to the 1986 Argentina victory over England, a famous international match known for Diego Maradona’s “Hand of God.”

Perhaps one day, Israel and Palestine will meet on the pitch in a legendary rivalry informed by politics and history. The game would be bitter, tackles would be hard and perhaps a few inappropriate chants would emanate from the stands. But that would be a vast improvement over the indefinite detentions, shootings and unwarranted destruction of facilities Palestinian footballers endure today.

Until that day, Israel must be held responsible for its actions. If UEFA selects Jerusalem in September, the choice can only be seen as an implicit endorsement of these tactics.