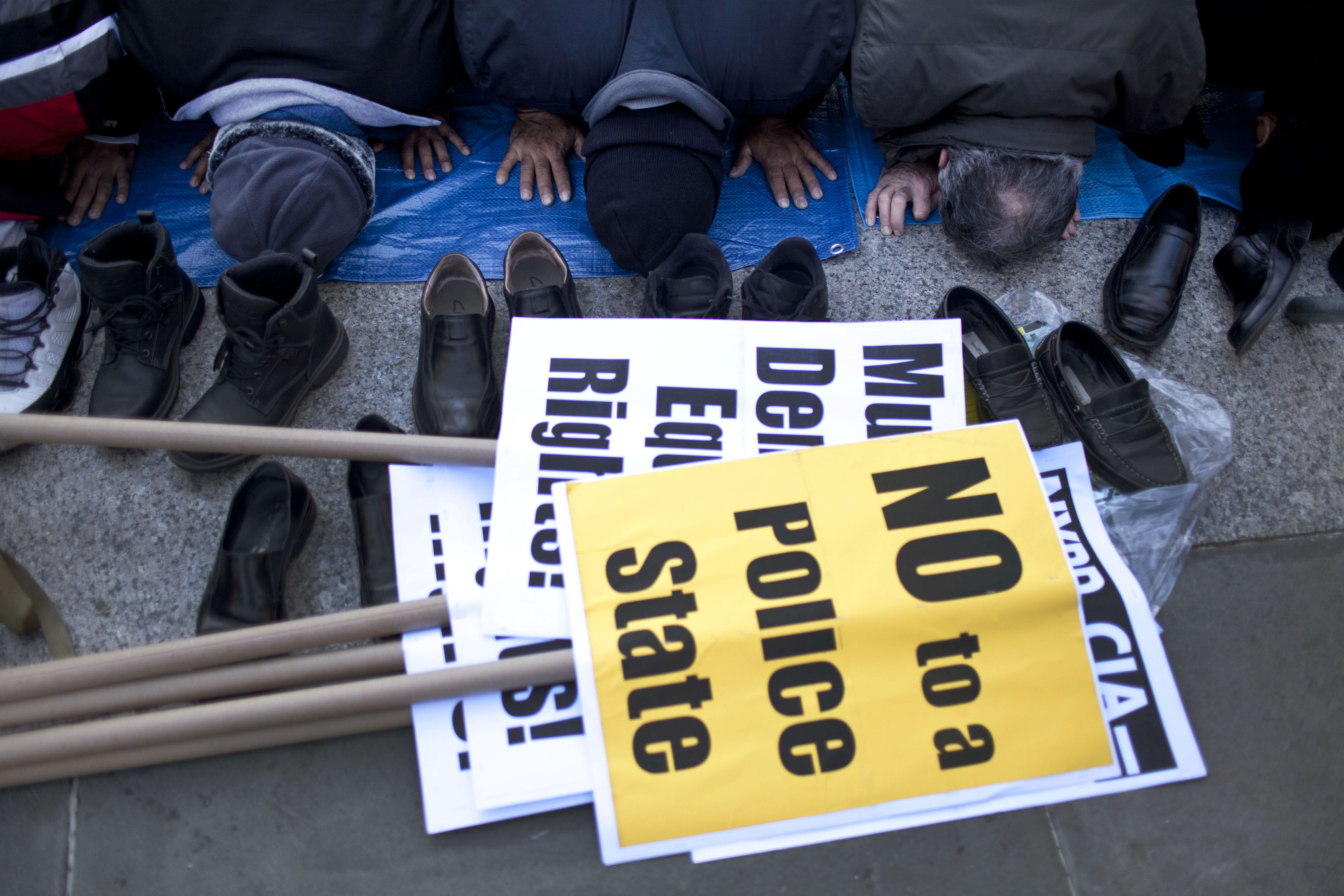 Demonstrators pray while protesting discrimination and surveillance of Muslim communities by the NYPD and CIA. (Reuters/Andrew Burton)

There is a grocery store near my apartment in Brooklyn called the NSA Food Markets (NSA here stands for National Supermarket Association). I joke with my friends that since they’re the NSA, they must know what I’ll be buying and ought to have it bagged and ready for me as soon as I enter.

My little unfunny joke just got unfunnier. The latest of the Snowden revelations is a long story on The Intercept, written by Glenn Greenwald and Murtaza Hussain, about how for years the NSA and FBI spied on Muslim-American leaders, covertly monitoring their e-mail communications under the trumped-up pretext that these men were agents of foreign governments. The Intercept describes a spreadsheet listing 7,485 e-mail addresses (at least 202 of them belonging to US citizens and legal permanent residents) that were monitored between 2002 and 2008. Their story focuses on five prominent Americans on this list: a Navy veteran, a highly respected lawyer, two professors and a civil rights activist.

Besides being male and American, what unites all of these men? It can’t be partisan politics, since they are Democrats and Republicans. It’s not religious conviction, since some are secular and others religious. They are naturalized citizens and first-generation Americans. They have family ties to South Asian, Iran and the Arab world. They have different political outlooks. In fact, the only significant common denominator among the men is their Muslim-sounding names. Don’t believe me? The article lists another document that instructs intelligence personnel on how to properly fill out memos to justify surveillance. In the space where the target’s name would be written, the memo offers a cute placeholder name: “Mohammed Raghead.”

If the surveillance was legal—which the Intercept article argues is questionable for at least one of the five—it was likely authorized under the Foreign Intelligence Surveillance Act (FISA), a notorious piece of legislation that bends as easily as a saw making music. Under FISA, warrants are issued in secret by a judge who hears only the claims put forward by the government. No other side is offered and, because the court is a secret one, what constitutes “probable cause” is impossible for anyone outside the process to determine. What we do know is that in FISA’s thirty-five-year history, the court has approved 35,434 warrants and rejected only twelve.

The fact that government would waste its resources on spying on someone like Faisal Gill (one of the five men named in the story) illustrates how ridiculous or paranoid—or both—this program is. A life-long Republican, Gill is a Navy veteran who joined the Bush administration after 9/11 and worked in the Department of Homeland Security, having obtained a top-level security clearance. He was also the Republican nominee for the Virginia House of Delegates in 2007. In 2001, he had worked as a consultant with the now-defunct American Muslim Council, whose founder, Abdurahaman Alamoudi, was arrested in 2003 for taking part in a plot to assassinate Saudi Crown Prince Abdullah and for illegally receiving money from the Libyan government. Alamoudi pleaded guilty, and the anti-Muslim right wing tarred Gill with Alamoudi’s crimes.

In the giant game of telephone that the government plays, any association, however slight, constitutes probable cause for suspicion. Publicly, Gill was investigated and completely exonerated of suspicion in 2005, and he resumed his duties at Homeland Security with a full security clearance. But in 2006, after he left government and started a law practice with Asim Ghafoor (also one of the five named in the article), the surveillance began, continuing through his 2007 candidacy for the Virginia legislature.

The fact that the anti-Muslim right wing’s smear campaign against Gill probably triggered the FBI and NSA’s surveillance should be emphasized. The same is probably true for Nihad Awad, the executive director of the Council on American Islamic Relations (CAIR). Awad was also spied on by the government, and CAIR is vilified, basically every hour, by the right-wing anti-Muslim machine. Withstanding the constant onslaught of suspicion that is meted out daily on Muslims in this country by anti-Muslim professionals (like Frank Gaffney and Pamela Geller) and their legions of amateurs is exhausting enough, but The Intercept’s story once again underlines how anti-Muslim neoconservatives have driven the nation’s law enforcement agenda.

Over and over again, we see that what’s suspicious to the FBI, the CIA, the NYPD and the NSA is the simple fact of being a Muslim. When Ghafoor represented the country of Sudan in litigation, he was placed under surveillance, while no lawyer from Hunton & Williams, a high-powered DC law firm that also represented Sudan in similar litigation, appears to be a target of NSA surveillance.

Nor did the anti-Muslim right-wing tilt of law enforcement stop in 2008. In 2011, Wired reported that the FBI trained its counterterrorism agents that “‘main stream’ [sic] American Muslims are likely to be terrorist sympathizers,” and that law enforcement “must identify the elements of verbal deception in Islam.” (In other words, all Muslims, not even just the “radical” ones, lie.) The same year, the NYPD, as part of its training for new recruits, screened a film claiming “the true agenda of much of Islam in America” is “a strategy to infiltrate and dominate” the country. In another undated memo that Wired obtained, the FBI told its agents that “under certain circumstances, the FBI has the ability to bend or suspend the law to impinge on the freedom of others.” Those circumstances include “the ability to gather information on individuals which would normally be protected under the US Constitution through the use of FISA [the Foreign Intelligence Surveillance Act], Title 3 monitoring [general surveillance by law enforcement], NSL [National Security Letter] reports, etc.”

Frankly, I’m sick of this crap. I’m sick of the black clouds of suspicion everywhere that all Muslims are terrorists, or potential terrorists, or sympathizers of terrorism. I’m sick of the multiple scripted arrests of terrorism suspects through the dubious use of informants and contrived plots. I’m sick of Homeland, 24 or now Tyrant-style representations of Muslims as well-dressed beasts and fifth columnists. I’m sick of the stupid accusations that Muslims don’t condemn terrorism or that Islamophobia doesn’t exist. A new study published by professors at the University of Connecticut found that job applicants with identifiably Muslim names received “32 percent fewer emails and 48 percent fewer phone calls than applicants from the control group, far outweighing measurable bias against the other faith groups.” But anti-Muslim prejudice is a fiction, the Islamophobes will tell you, and you’re just whining.

I’m not whining. I’m telling you that these simplistic and foolish assumptions that people carry about Muslims have consequences, and the burden of responsibility is constantly put on Muslims to prove that they are not something rather than for people or institutions to examine their own prejudices. Law enforcement wants to keep its practices secret, in part because if and when they are brought to light, we see how much these practices are built upon guilt by association and essentially racist assumptions that they don’t want exposed. The immediate consequences here affect Muslims directly, but the longer-term damage is a degradation of the rule of law in this country.

I’m not all at surprised by The Intercept’s revelations. Everyone knows this happens, just as we all know the government has a long history of unwarranted surveillance of activists and dissidents. But we can’t keep telling ourselves that it was wrong then for the government to spy on Martin Luther King Jr., but just fine to spy on Muslims today. Isn’t it time to admit that in this country, all Americans—including the Muslim ones—deserve equal treatment and equal protection? And isn’t it time to admit that this is not happening? If we don’t admit this now, when will we?