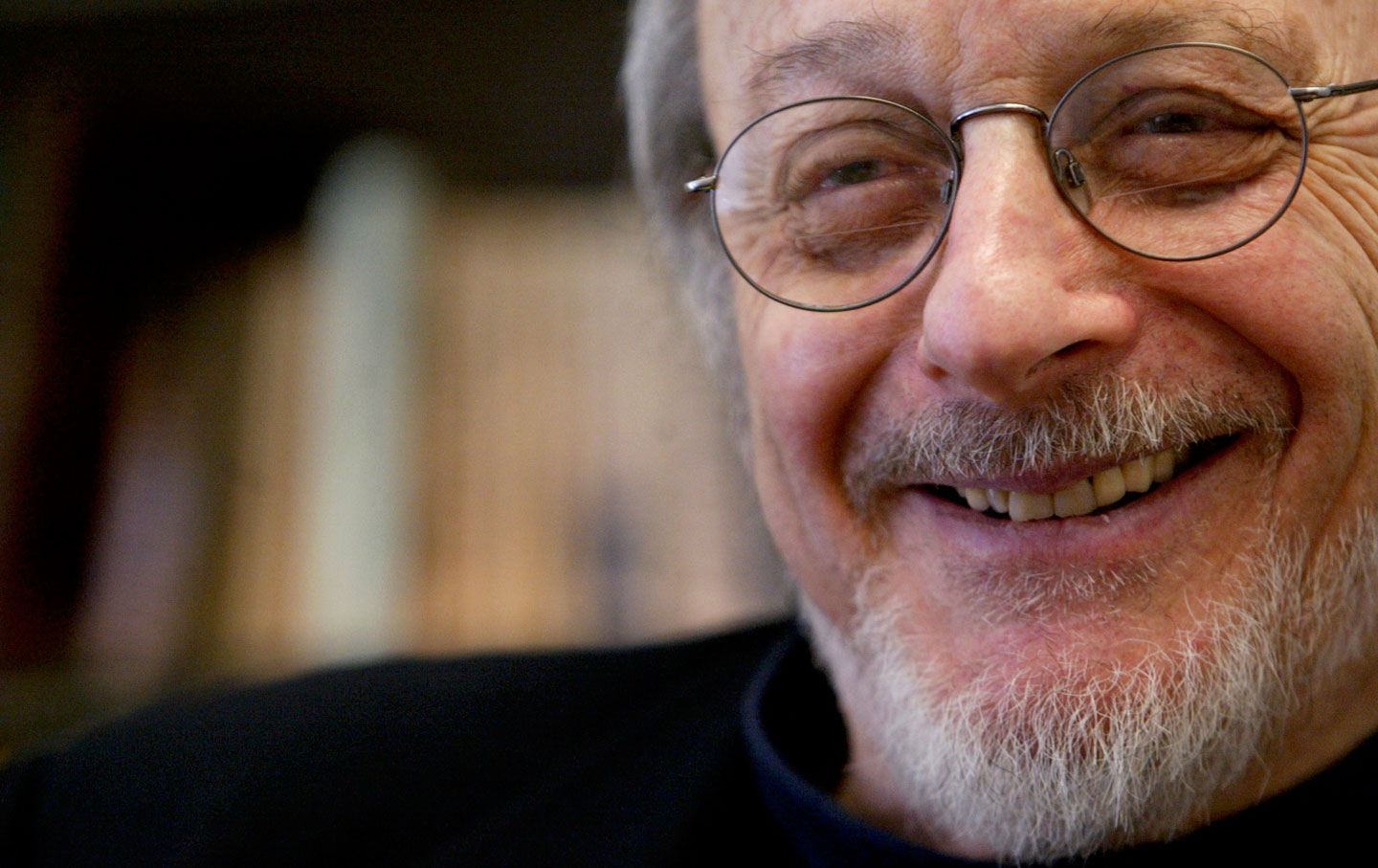 E.L. Doctorow, who died on July 21 at the age of 84, was not only a personal pal; he was a supporter of, investor in, and contributor to this magazine and, as the world knows, a gifted, original, and über-relevant novelist.

I first met Edgar in the late 1960s, when he was editor in chief of Dial Press, where his authors included James Baldwin and Norman Mailer. At the time, I was editing and publishing Monocle, a small journal of political satire.

We had an idea for a book that became Report From Iron Mountain: On the Possibility and Desirability of Peace. Its premise was that the US government had commissioned a special study group to plan the transition from a war economy to a peace economy—but the group, which met in secret, found that without war or the threat of it, the economy would collapse, so it quashed the report. The book was written by Leonard Lewin, with input from economist John Kenneth Galbraith, Monocle editors Marvin Kitman and Richard Lingeman (later executive editor of The Nation), and yours truly.

Although all of its footnotes were to real sources, the report itself was, of course, a hoax. But we wanted a publisher who would list it as nonfiction and not let the sales force know otherwise. In Edgar Doctorow, along with Dial Press publisher Richard Baron, we found the perfect coconspirators. When a reporter from The New York Times called to ask whether it was a real, government-commissioned study, Doctorow advised him: If you don’t believe it, check out the footnotes. And when the reporter called the Johnson White House, the officials—not knowing whether or not the Kennedy administration had commissioned it—simply responded, “No comment.” The Times ran a front-page story saying this was possibly a hoax and possibly a secret government document, and the book ended up on the Times bestseller list!

Little did we know that this episode, exploiting the complicated line between fact and fiction, was to prefigure Doctorow’s remarkable career as he went on to write, among other works raising critical historical, political, and cultural questions, The Book of Daniel (inspired by the case of Julius and Ethel Rosenberg), Ragtime, Billy Bathgate, and The March.

All of this is a matter of public record. What is not generally known, however, is Edgar’s unique contribution to this magazine. I am not only talking about the 22 extraordinary articles, essays, meditations, and speeches by him that we were privileged to publish, commencing in 1978, but we can start there. They ranged from his thoughts on “The Rise of Ronald Reagan,” and why it was wrong for the writers group PEN (on whose board he sat) to invite Secretary of State George Shultz to address its annual gathering, to his meditations “The State of Mind of the Union” (1986) and “A Citizen Reads the Constitution” (1987), not to mention his subversive reflections on “Why We Are Infidels” (2003).

Were it not for Edgar, I might never have had the opportunity to edit The Nation in the first place. Long story short: When it became known in 1977 that James Storrow, the publisher and owner of the magazine, was ready to pass the baton to the next generation, young Hamilton Fish and I were one of 20-odd parties that expressed interest. I was a candidate to become editor, while Ham (whom I had gotten to know during Ramsey Clark’s 1974 campaign to succeed Jacob Javits as New York senator) set out to raise funds to buy the money-losing magazine and sustain it while we did our best to raise it to a position of self-sustainability. It was Edgar who, fresh from his Ragtime triumph and without being asked, wrote a check for $10,000 so that Ham would have some “walking-around money” (as Edgar called it) while he did his best to raise the $1 million that would make the deal possible.

And when Storrow balked at signing the needed option agreement, it was Edgar, along with Ralph Nader and a couple of other longtime Nation enthusiasts, who attended a key meeting that helped persuade Storrow—who, it turned out, was not quite psychologically ready to yield control—to sign the deal that enabled fundraising to go forward. Some years later, Doctorow, who had been at Kenyon College with Paul Newman (Edgar liked to joke that it wasn’t until the actor graduated that he started to get the good parts), set up a dinner date for me with Paul and his wife, Joanne Woodward. The result: Newman became the magazine’s single largest outside annual financial supporter until his death.

Edgar was always modest when responding to questions about where he got the ideas for his books, almost as if he had nothing to do with it. As Edgar tells it, he was sitting at his desk, having written 150 pages about a couple much like the Rosenbergs from the vantage of an omniscient narrator, when suddenly a voice (which turned out to be that of their son) emerged from his typewriter, and out came The Book of Daniel. Or he was on his porch in New Rochelle, when what should come riding down the road but the idea for Ragtime, with Coalhouse Walker at the wheel.

Where did Edgar get the idea for Loon Lake? He was driving in the Adirondacks, saw a sign that said Loon Lake, and that was it. “You’ve got to let things happen to you to write,” he said. A friend once said that Edgar—a student of John Crowe Ransom, the Kenyon College professor considered to be the founder of the New Criticism—was “a walking refutation of the intentional fallacy.” When I asked him what would have happened if he’d passed a sign for Lake Placid instead, Edgar replied, “I did pass the sign, but I didn’t notice it.” Then again, he once told an interviewer: “The fact of the matter is that for the fiction writer, once the book is composed, the fictive machinery keeps going—it doesn’t turn off. Whatever you used to write the book, you’re now using your memory to create a fiction about it.”

We will miss you, Edgar, with your arched right eyebrow that let us know your unique appreciation for the interaction of fiction and nonfiction, the comic and the serious, and how you transcended the simplistic distinctions between high and low culture.

The first time Edgar invited Annie (the woman who was to become Mrs. Navasky) and me to the Doctorow home in New Rochelle, he and his brother Donald gave a recital on banjo and guitar. On another occasion, before a Nation Town Hall event in support of Poland’s Solidarity movement, Edgar invited Pete Seeger over to learn the Solidarity protest songs in Polish from a visiting member of the movement, so that he might introduce them at Town Hall. If words could sing, this note would end with Pete singing Woody Guthrie’s “So Long, It’s Been Good to Know Yuh.”