Bernie Sanders and Kirsten Gillibrand speak during a news conference to reintroduce “Medicare for All” legislation on April 10, 2019. (AP Photo / Susan Walsh)

Medicare for All is hot—ask any Democratic presidential contender. Whether it’s outright support or a cautious embrace, every major candidate has a take on the idea, and most endorse universal health care in some form. But with too many candidates seeking the Democratic nomination and too many people trying to crowdfund their care, the constant flood of headlines lets people lose track of what “Medicare for All” actually means. We know that people are hurting and universal coverage is popular, but according to a new Data for Progress analysis, single-payer proponents have a lot of catching-up to do if we want to convince voters to make Medicare truly for all.

Most activists associate Medicare for All with Vermont Senator Bernie Sanders and his pitch for single-payer health care, but two major types of universal coverage plans now use the Medicare brand. The most recent iteration of the classic single-payer proposal is Sanders’s newly revamped Medicare for All Act, which would automatically enroll everyone in a comprehensive government plan after a four-year transition period. The other option is a Medicare buy-in like the one proposed in the House by Representatives Rosa DeLauro and Jan Schakowsky—called the Medicare for America Act—which would allow anyone to opt into an improved Medicare plan. While both ideas are often invoked under the banner of “Medicare for All,” they are fundamentally different: The former provides all health care through a single public insurance plan; the latter leaves many private employee-sponsored insurance plans intact.

Both proposals result in everyone’s having insurance, which is good, but single payer eliminates premiums, deductibles, and co-payments, which is better. Disposing of those costs would require broad-based tax increases, a concept that scares voters and politicians alike. But studies by the Political Economy Research Institute (PERI) at the University of Massachusetts at Amherst and the Mercatus Institute, a Koch-funded libertarian think tank, both found that despite potential tax hikes, Sanders’s Medicare for All bill would reduce national spending on health care while expanding and improving coverage. Although funding for health care would be routed through the federal government’s balance sheet, the average person would save more on health care than they would spend on increased taxes.

With a focus on minimizing disruption over maximizing savings, proponents of the buy-in argue that it would provide universal coverage while allowing those who are happy with their current insurance to keep it. Under DeLauro and Schakowsky’s plan, employees could opt out of their employer’s private health insurance, or the employer could switch their whole workplace into the Medicare plan. Anyone currently uninsured, receiving Medicaid, or covered under the Affordable Care Act exchanges would automatically be enrolled, but recipients would still have to pay premiums, albeit on a sliding income-based scale.

Despite being the superior policy, single payer isn’t the most popular plan. At Data for Progress, we analyzed Civis Analytics polling data and found that the public is not yet convinced of single payer’s cost-saving potential—so the messaging needs to change. Beyond repeating the mantra that single payer would, in fact, save money, politicians should respond directly to voters’ most tangible concerns. Medicare for All shouldn’t stand alone; legislators should complement it with other viable policies that would control costs, like Senator Elizabeth Warren’s proposal to bring down astronomical pharmaceutical prices by allowing the federal government to directly manufacture certain generic drugs. You don’t have to do any math to understand that lower drug prices will save people money, so this complementary legislation could ease voters’ apprehension over how Medicare for All would affect their wallets.

To understand what voters think of Medicare for All, Civis Analytics presented survey respondents with single-payer and buy-in plans, telling them that both had been proposed by Democrats and including Republican arguments against each. Because support for single payer varies wildly when arguments for and against it are presented, this type of framing helps reflect public opinion in the context of real-world politics. Respondents were also told that under single payer, everyone would have Medicare; premiums and deductibles would be eliminated; and income and payroll taxes would increase at the rates proposed in Vermont’s failed attempt to implement its own single-payer system. For the buy-in, respondents were told that anyone would be allowed to purchase Medicare if they wanted, with no mention of taxes, co-pays, or premiums. Full question wording and district-by-district results can be found here.

“Medicare buy-in is the most popular universal health-care policy we’ve polled, drawing high levels of crossover support from younger Republicans,” noted David Shor, the director of political data science at Civis. Estimates of net support at the district level show that there are dozens of districts—mostly held by Democrats, but including some Republican-held seats—where buy-in has public support but single payer is underwater. Given this reality, even the most politically craven members of the Democratic caucus should co-sponsor the Medicare for America Act, at a bare minimum. 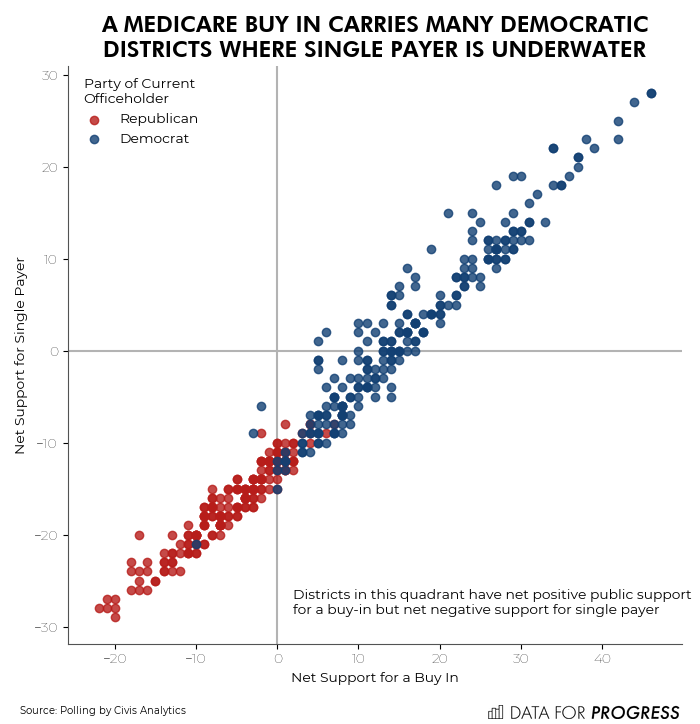 To better understand the differences in support between these two policies, Data for Progress analyzed open-ended responses to each question using a model that attempts to predict support based on the language in the response. In order to include independent voters, DfP identified respondents based on their 2016 candidate of choice rather than party affiliation.

Among Clinton voters, single payer had net-positive 31 percent support, with many of those opposing showing clear concern over potential tax increases. Trump voters were characteristically unified in their opposition to single payer, rejecting it by a margin of 45 percent. But in open responses from both sets of voters, words like “cost” were associated with lower support for both single payer and the buy-in, while words like “afford” were associated with higher support. Generally, “cost” was used to refer to government expenditures, while “afford” was used in relation to individuals’ burdens of insurance and care.

While it may seem trivial, the distinction suggests that different people think about the costs of the health-care system in fundamentally different ways. Depending on the particulars of how buy-in or single payer is financed, the distribution of who saves can vary a great deal. Although the PERI study estimates that some of the largest savings from single payer would go to middle-income families, this reality isn’t getting across to those voters. Under the financing plan proposed by the PERI group, an individually insured family making $60,000 a year would save 14 percent of their income under a single-payer system, but families with $50,000 to $100,000 in annual income are the least likely to support single-payer.

The fact that the strongest opposition to single payer comes from many of the people who stand to save the most suggests that conservatives are winning the debate on costs. But this debate is still winnable: A large portion of what families spend on health care are compulsory premiums, which are functionally no different than a tax. Single-payer proponents should make that clear. 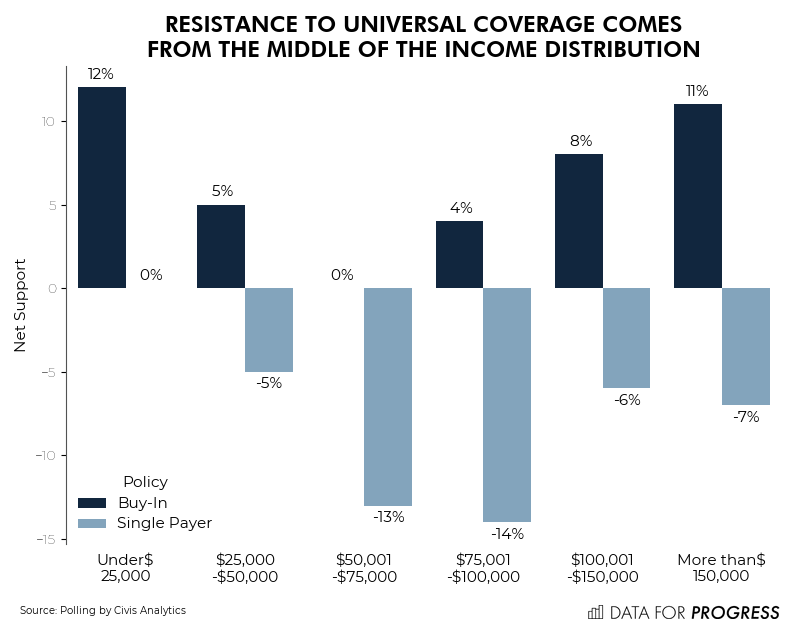 While voters’ concerns over taxes remain a barrier, some single-payer advocates see the buy-in as a way to smooth the transition to true Medicare for All. In fact, the new Medicare for All Act embraces this strategy, using a four-year transitional buy-in period to move the country to single payer. New York Senator and presidential hopeful Kirsten Gillibrand wrote the act’s transition plan, and she is confident that Americans will be eager if purchase a public plan if given the option.

“During [the transition period], the American people will be able to see firsthand how a nonprofit health-care system, not beholden to corporate profits, can offer high-quality health care at a much lower price than private insurers,” Gillibrand said in a statement to The Nation. “It will be a powerful demonstration of what our country looks like when people are put ahead of profits, and health care is not a privilege.”

Single-payer’s political challenges mean the road to comprehensive universal coverage and the elimination of unnecessary cost-sharing is still long. That’s a problem: People are dropping entire rent payments on multiple-sclerosis drugs and scaling back their insulin regimens right now. With pharmaceuticals accounting for about 15 percent of US health-care spending and pharma companies using monopoly power to gouge the sick with high prices, the crisis is obvious and immediate.

While the extreme price of treatment has caused interest in universal coverage to surge, various measures to control the rising costs of prescriptions received tepid support from Democrats in the 115th Congress. Warren and Schakowsky introduced a bill that would allow the federal government to control the manufacturing of certain generic drugs, but the legislation earned no additional co-sponsors in the House or Senate. More recently, the House passed a slate of bills that seek to forbid pharmaceutical companies from paying to delay the release of generics and weaken the exclusivity rules that protect newly registered drug patents—both of which practices serve to shut out competition—but the measures are unlikely to become law under the current administration.

These reforms would be welcome, but as the costs of life-saving drugs reach crisis levels, it’s clear that they don’t go far enough. Voters are open to much more robust changes to reduce drug costs, and the 2018 electorate showed strong net support for government-manufactured generic drugs. 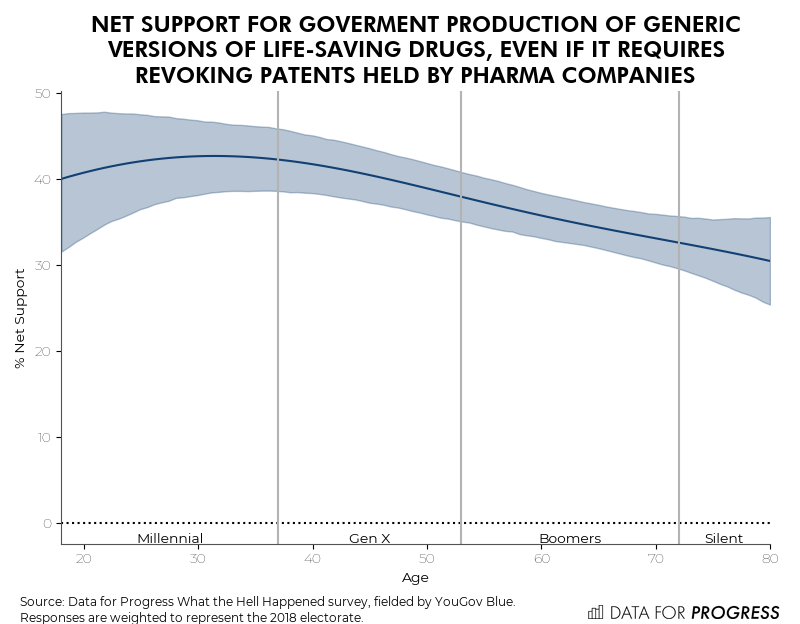 Support for government-manufactured generic drugs by generation. Data for Progress and YouGov Blue

Single payer is worth fighting for, but the opposition will be relentless. “The story of healthcare in America is the story of how a few powerful corporations have collaborated to tank reform efforts that would threaten their monster earnings,” noted Abdul El-Sayed, a physician, public-health advocate, and former Michigan gubernatorial candidate. “Medicare-for-All—the real thing—has the potential to finally align our healthcare system with the needs of the people it serves, rather than the profiteers who have dominated it for a long time.”

Under our current system, senior citizens drain their retirement funds for medicine and toddlers use walkers fashioned out of PVC pipe. Though the injustice is obvious, the solution, to most people, is not. Single-payer advocates must recognize that while health care as a human right is a crucial goal, as a political message it has not won over an electorate with a knee-jerk resistance to across-the-board tax increases. Single payer will only be achieved by convincing voters that it is a more efficient and cost-effective system—not just for the most vulnerable in society, but for everyone.