A man covers his mouth with a fifty-dollar bill to protest a new government policy that requires news websites to obtain licenses on June 8, 2013. ( AP Photo / Wong Maye-E )

On the evening of April 1, 2019, I sat at my desk refreshing the Singapore Parliament’s website, waiting for its restrictive “fake news” bill to drop. My activist peers and I had been anticipating the bill for almost two years; we expected it to be yet another piece of legislation that could hang over critics’ heads like the sword of Damocles. We didn’t want it, and resisted it as loudly as we could. But we already knew we weren’t going to succeed.

Singapore is a city-state that’s never seen a change in government. The People’s Action Party (PAP) came to power in 1959—six years before we became a sovereign nation—and has never lost an election since. They’ve enjoyed a supermajority in Parliament the whole time.

In other words: What the PAP wants, the PAP gets. And our voices—those of activists, human rights defenders, or opposition politicians–matter little to the authorities.

This time, the fight was over the Protection from Online Falsehoods and Manipulation Bill, also known by its acronym, POFMA. Ostensibly crafted to swiftly deal with misinformation and disinformation spreading online, the law grants any government minister the power to issue corrections (the language of which they could dictate), takedown orders, or demand that Internet service providers or platforms block access to content.

The law also allows ministers to essentially defund websites found to have spread falsehoods. Even if one wants to lodge an appeal to the High Court—which can only be done after one fails in asking the minister to review his own decision—one would still have to first comply with the orders. Failure to do so could result in heavy fines and long prison sentences.

For a ruling party that already dominates the mainstream media and has the power to set the national agenda, such a law is a handy weapon to add to the government’s arsenal of methods to suppress speech. It would allow PAP ministers to become the arbiters of truth in the first and second instance. The implications for freedom of expression, press freedom and even academic freedom were clear.

What can Singaporean civil society do in such a situation? The honest answer: not much. But people acted anyway. We had to.

We couldn’t depend on the mainstream media—largely government-controlled—to properly inform Singaporeans about what was actually in the bill and what it meant, so we produced analyses and breakdowns of the law. Academics, journalists, arts groups, publishers and activists issued or signed on to statements, doing the best we could to raise awareness and get our concerns on the agenda. Around 200 people turned up in Speakers’ Corner, the only space in the country in which people can demonstrate without permit, to protest POFMA.

It might not sound like very much to citizens of more mature and contested democracies. But in a little city-state where things tend to be taken as a fait accompli for the ruling party, it was quite a lot of noise indeed. It isn’t a common occurrence for civil society, artists, academics, journalists, and big corporate tech companies to all be publicly worked up about the same thing, but the “fake news” law brought us together.

The joint outcry triggered a month of the PAP government playing defense: Government ministers had to make multiple statements at events or through the media, including social-media platforms. They produced videos for Facebook. They tried to reassure Singaporeans that there was nothing to worry about. They downplayed the amount of opposition, dismissing critics as a “small group” who were “crying wolf.” And, in a stunning move that looked somewhat like desperation, the law minister shot an interview with a well-known Singaporean comedian in her Singlish-speaking ah lian (a term that refers to a particular stereotype of a crass, loud-mouthed Chinese Singaporean woman) persona repeating assurances such as promises that the law will not target criticism of the government. 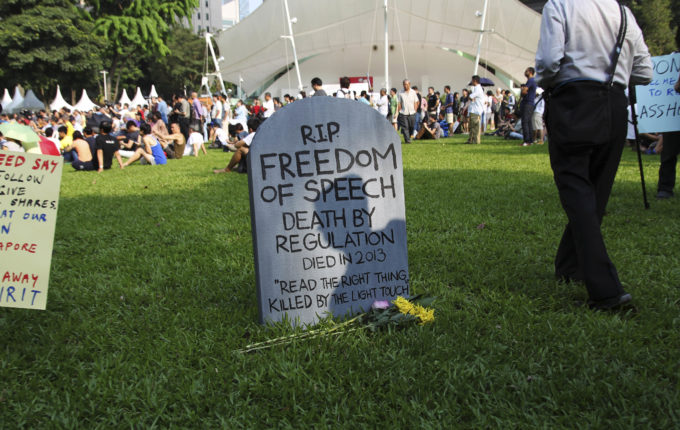 It would appear that the government’s line on Singlish is that it should be discouraged… unless they need it to sell an unpopular piece of legislation.

This inevitable result prompted a lot of people to ask activists an understandable question: What was all that for? When the odds are so stacked against us, it’s easy to ask ourselves why we should even bother. Why work so hard when you know you’re going to be on the losing side?

To find out how others who had pushed back against POFMA felt, I reached out to Dr. Linda Lim, professor emerita of corporate strategy and international business at the University of Michigan, and a Singaporean who’d coordinated the academics’ response to the law. “I don’t see the struggle over POFMA in terms of ‘wins’ or ‘losses,’” she wrote in an e-mail. “I believe that everyone would win from a more tightly focused and narrowly crafted law that would remove much of the definitional uncertainty that causes concern and could discourage research and innovation.”

She’s right; it would be far too simplistic to see our efforts as a bust. The backlash to the law pushed the PAP government to make reassurances and clarifications that, while not as legally binding as they would have been if the bill had been amended, are still on the record. This has planted the issue of freedom of expression, the chilling effect and self-censorship in Singapore, front and center. It’s raised the potential political cost of using the law once it’s actually signed into force, precisely because government ministers have been promising all month that it won’t affect free speech. It’s taken away the government’s ability to claim that Singaporeans wholeheartedly supported the bill because there had been no opposition.

A government might have complete hegemony, but making a dominant government work for what it wants is always a worthwhile endeavor. Bit by bit, this builds up toward a “new normal,” increasing people’s expectations for engagement, debate, and answers. It normalizes the idea that new laws—particularly those as important as POFMA—need to be contested and scrutinized and criticized, and that politicians should be able to come out and defend their own ideas.

It’s not glamorous work; for most people, it won’t even be considered memorable work. But this is the sort of labor that undergirds social movements and political change.