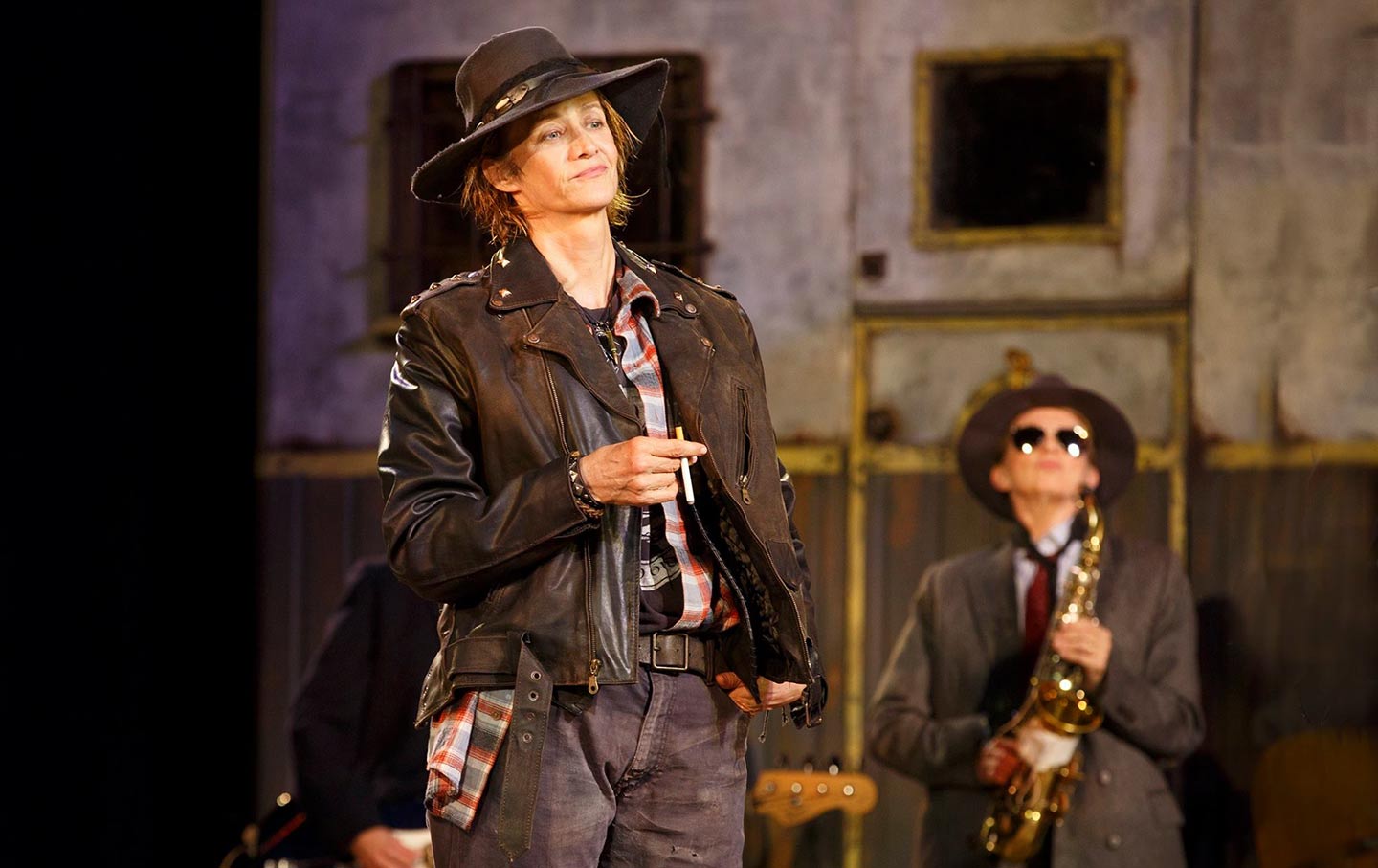 Janet McTeer as Petruchio in The Public Theater’s free Shakespeare in the Park production of The Taming of the Shrew. (Public Theater / Joan Marcus)

The uneasy state of feminism in America is reflected in the well-intentioned but unsteady production of The Taming of the Shrew at Central Park’s Delacorte Theater (through June 26). Directed by Phyllida Lloyd, this performance of Shakespeare’s controversial play, by a fiercely talented and entirely female cast, inspires uncomfortable but crucial questions about the state of gender relations in America—especially with regard to one woman in particular.

The intention to modernize the play is clear from the moment it begins. (This is the third of Lloyd’s all-female Shakespeare production—following a thrilling Julius Caesar and an explosive Henry IV.) To start Taming’s two-hour, uninterrupted show, the women are paraded onstage in a beauty pageant, narrated by an accurately smug mimicry of Donald Trump. Strutting across the stage, wearing bright red dresses and frozen smiles, the women embody acceptable images of femininity.

Shakespeare’s story of Katherina’s taming is a familiar one that has sparked debates for centuries. Katherina, the titular shrew (Cush Jumbo), and Bianca’s father, Baptista (LaTanya Richardson Jackson), refuses to allow Bianca (Gayle Rankin) to marry until Katherina does, and any romantic prospects are deterred by the elder daughter’s famously bad temper. The future looks despondent for all of Bianca’s suitors until Petruchio (Janet McTeer, brimming with swaggering masculinity) arrives in town with the intention to “wife it wealthily” and Katherine provides a perfect opportunity for him to do just that. After their wedding, Petruchio sets out to transform his firebrand bride into a submissive woman, denying her food and sleep until she indeed does love, honor, and obey her husband and proclaim so publicly, to the astonishment of her family and peers.

The prospect of an all-female cast was tantalizing, but what Phyllida Lloyd really intended to achieve is unclear.

While some claim that Shakespeare wrote The Taming of the Shrew as an ironic play, crediting its often-ignored framing device as a clear indication of just that, others have decried its abusive and misogynistic message and labeled the play sadomasochistic. The prospect of an all-female cast, directed by a woman, was tantalizing, but what Lloyd intended to achieve with this production, beyond its modernization, is unclear. The cast of women wonderfully inhabits its characters, sincerely emphasizing their masculinity while also highlighting the general foolishness of their actions, and the persistence of the objectification and possession of women is apparent.

While Hortensio and Gremio (a very good Judy Gold) scheme to court Bianca, they make constant references to obtaining “access” to her. As he attempts to woo Katherina, Petruchio informs her, “You must not look so sour,” a command familiar to any woman ordered to smile while appearing in public. After Katherina breaks a musical instrument in a fit of rage, Petruchio affectionately belittles her emotions by referring to her as a “lusty wench.” And after seeing Bianca and Lucentio embrace, Hortensio, who had been devoted to wooing her, proclaims her a “proud, disdainful haggard.” The comment inspired a great deal of laughter from the audience, but this critic shuddered, thinking of the frequent reports of men attacking or murdering women for rejecting their sexual advances. Despite its cast, this production of The Taming of the Shrew is still a man’s story.

While the comedic aspects of Shakespeare’s script are enjoyable, the darker undertones are not presented clearly. Jumbo gives an impassioned performance as Katherina, at times bordering on hysterical, but the horror of what Petruchio puts her through is not staged powerfully enough. In a climate where rape culture, street harassment, and the objectification of women are rampant and require more public dialogue, Petruchio’s abuse should be told with more forceful scrutiny.

Relating The Taming of the Shrew to a present-day audience raises the question of whether staging a centuries-old story in modern clothing and sets has any transformative power over how we think and live. And, if the play did not already register with an audience days after a woman clinched her political party’s nomination for president, a light-hearted reminder was given when Gremio broke character and addressed the audience in the form of a stand-up routine, lamenting that a woman had directed the show and referring to “some chick who’s going to be president.” The disdain and flippancy with which Gold makes this remark feel all too familiar, and thus strains the limits of what comedy can do. A more heavy-handed approach comes at the production’s conclusion: a dance routine performed to Joan Jett’s “Bad Reputation,” which also strikes a discordant note. Is it a performance of defiant triumph or of desperation? Then again, the same question could be asked about Clinton’s rise to power and the public’s response to it.