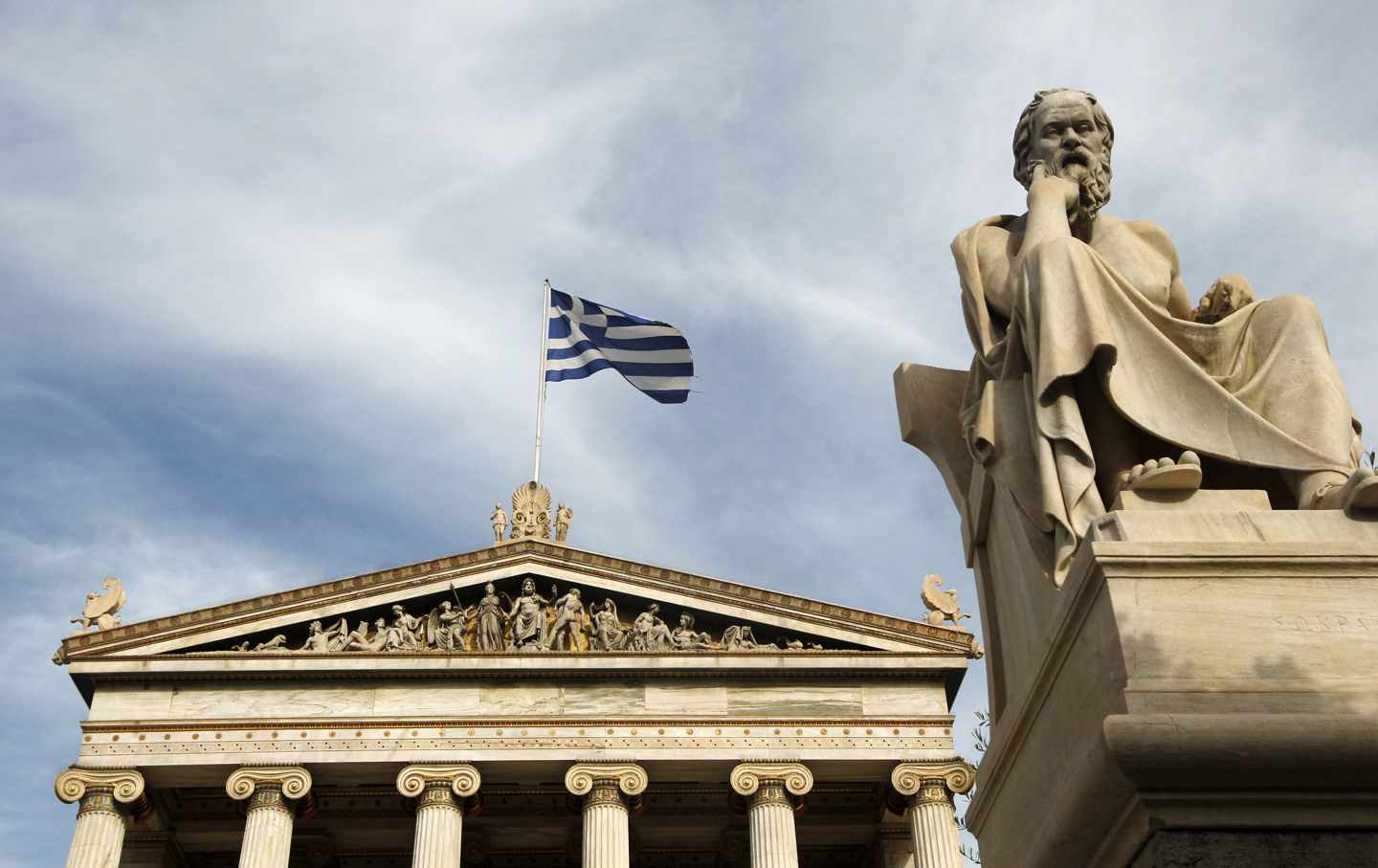 A statue of Greek philosopher Socrates is seen outside the Athens Academy. (Reuters/John Kolesidis)

Most economists now agree: Imposing austerity in a time of recession does not work. It only inhibits growth and deepens the recession.

Yet last week, the troika—the European Commission, the European Central Bank, and the International Monetary Fund—forced Greece to accept another round of austerity that requires, among other things, €50 billion in government assets to be collected into a privatization fund and the reversal of laws passed earlier this year that were intended to ease conditions for a desperate population. In return, the country will receive a €86 billion bailout. In the words of recently resigned finance minister Yanis Varoufakis, the latest deal is “absolutely impossible, totally non-viable, and toxic.”

The IMF itself, which now advocates debt restructuring, knows that as long as its economy is shrinking, Greece will never be able to repay its debts. In the meantime, the troika has stripped the last vestige of sovereignty from the Greek government.

Many economists and commentators, as well as some political and economic leaders, continue to call for Greece’s exit, or “Grexit,” from the eurozone, arguing that while the country would suffer an initial shock, currency devaluation after leaving the euro would eventually allow a return to growth and a healthy economy. But the voices are far from united. Here’s a look at the pros and cons.

The Gains From Grexit

First and foremost, Greece will regain its sovereignty. As negotiation after negotiation has shown, the Greek government now has little control over its economic policy, which is left instead to the whims of class and institutional tensions across Europe. If it stays in the union, The Economist points out, Greece “will face painful budget cuts with no monetary flexibility and without the opportunity to devalue. Its debts will still be there, pending some future act of German magnanimity that may or may not be forthcoming.”

With Grexit, on the other hand, Greece will be able to make its own decisions about monetary policy. After all, “sovereign nations get to make sovereign decisions about their future,” as James Stavridis wrote for Foreign Policy. The government could use monetary policy to adjust for inflation and unemployment. The “new drachma,” devalued, could boost Greece’s ailing tourism industry, since it will be easy for people living under other currencies to vacation there. With a “velvet divorce” and break from the euro, the Greek government could push through budget cuts with autonomy and flexibility. Within a few years, GDP, at least according to some analyses, would resume an upward trajectory.

“Everyone knows that debt relief is not possible within the eurozone.” —Wolfgang Schäuble

Another benefit from Grexit would be debt relief. The Economist notes that, since exit would almost certainly bring with it default to creditors, Greece would be facing “a much smaller sovereign debt burden.” The New York Times reports that German Finance Minister Wolfgang Schäuble “suggested that Greece would get its best shot at a substantial cut in its debt only if it was willing to give up membership in the European common currency,” since, Schäuble insists, “everyone knows that debt relief is not possible within the eurozone.”

Some hope that debt restructuring might play a role in the terms of exit. Syriza Member of Parliament Costas Lapavitsas argues that the ideal exit is a negotiated one, with the country receiving a 50 percent debt write-off by the monetary union. Under such a scheme, the ECB could protect the devaluation of the new currency, with maximum devaluation at 20 percent. More likely, though, is a contested, or non-negotiated, exit. Under those circumstances, Lapavitsas says, debt default would “open up a process of negotiated debt restructuring.” Either way, debt restructuring would have to happen with Grexit.

The most probable immediate effect of an exit would be hyperinflation. The New York Times spoke with Michalis Massourakis, the chief economist at trade group Hellenic Federation of Enterprises. With Grexit, Greece would have to start printing its new currency “with no end in sight.” With all this new money entering the market, he predicted, “This is going to end in hyperinflation.”

Though currency devaluation and hyperinflation are often written off as minor in the long run, analyst Ruben Segura-Cayuela disagreed in a roundtable on Grexit held by Bank of America Merrill Lynch:

In the short term, we expect the Greek economy to suffer an unprecedented contraction; in the long term, we would expect growth to surprise to the upside only if Greece implements the reforms that the country has not implemented so far, and which would have helped avoid Grexit in the first place.

In other words, a return to growth is far from guaranteed. Segura-Cayuela continued, “The Greek economy would suffer a GDP contraction of unprecedented magnitude, even by Greek standards. Just as an example, Argentina contracted 11 percent in the year after its default and devaluation. Moreover, inflation could increase to double digits.”

Moreover, currency devaluation in Greece, a country that is not export-driven, might do little to increase GDP. Instead, it could cause import prices to rise—raising the cost of living and making the recession even more brutal. The director of the Brussels-based think tank Bruegel, Guntram Wolff, wrote about the significance that Greece’s current account balance plays in predicting its future economic recovery:

In Ireland, Spain and Portugal, the largest part of the adjustment has come from an increase in exports. All three countries have therefore managed to change their production structures and substantially increase exports. This is a desirable and healthy way of adjusting, which also shows that it was not primarily a demand compression that drove the external adjustment in these three countries….

Greece stands out as an outlier in external adjustment. Its adjustment was almost exclusively driven by a contraction in imports while exports have only very recently been positive.

In other words, the turnarounds in other European countries (still only partial) may not apply to a Greece that leaves the euro. With a shrinking current account and an import-based economy, the recession predicted by financial leaders could be long-lasting.

It does not help that Greece’s former finance minister lacks faith in his country’s ability to survive, or even carry out, a Grexit. “I’m not sure we would manage it,” Yanis Varoufakis said in an interview with the New Statesman, “because managing the collapse of a monetary union takes a great deal of expertise, and I’m not sure we have it here in Greece without the help of outsiders.”

Right now, Greece is suffering from a massive liquidity shortage. The only capital flow comes from the European Central Bank, and the ECB can’t afford—or at least is unwilling—to inject much more into the country’s economy. If the government cannot pay its debts, The Economist notes, “the government will soon start paying its bills with IOUs that, in time, will become a parallel currency.”

If this is the first step to a new currency, it would force Greece to face a harsh reality it might not be ready to confront. How much money would it print, and how would it avoid inflation? Would it peg the currency against another—and how would it make this decision, given that its new currency would be starting at such a devalued level?

In addition, Grexit could lead to political unrest. As The Economist puts it:

The road would be rocky. The economy is already facing a nasty economic end to 2015, thanks to the effect of the immediate crisis on tourism, investment and domestic consumption. Capital controls, financial instability and social unrest may accompany an exit.

Would right-wing nationalists fill the power vacuum? The Times predicted they might, during a previous round of Grexit concerns. Unrest could undermine tourism and send the economy into an even deeper tailspin. Amid the furor over its latest capitulation to the troika, Syriza’s hold on power is already tenuous. Any move toward Grexit could force new elections, with unknown consequences.

The Greek leadership will have to face these two sides of a difficult decision over the course of the coming months. While European leader after European leader hints that Greece would be better off outside the eurozone, the political and economic consequences of exit carry high stakes and lack precedent. Until the experiment itself is carried out, there is only one thing Greece can rely on: the familiar failure of austerity and the circumstances under which its citizens survive today.