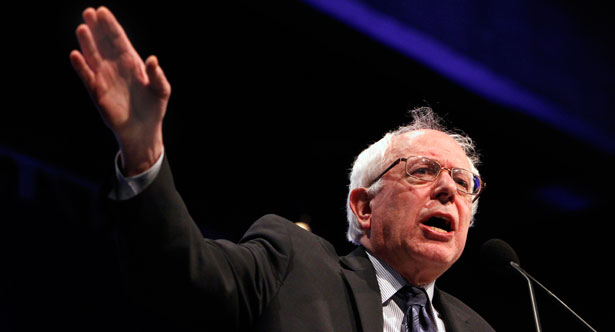 It’s hard to pinpoint the pinnacle of Republican depravity, but GOP senators came close Thursday afternoon when they blocked a bill extending healthcare, education and job training to hundreds of thousands of veterans, largely because they were unable to use the bill as a vehicle for new sanctions on Iran.

“Today, the Senate had a chance to put aside partisan politics and do what was right for the men and women who have sacrificed so much while wearing our nation’s uniform,” said Daniel Dellinger, national commander of the National Legion, a prominent veterans organization with a conservative reputation. “I don’t know how anyone who voted ‘no’ today can look a veteran in the eye and justify that vote.”

Republicans used a procedural move to kill the legislation, which was the largest veterans bill in decades and had the support of all of the major veterans groups. The bill would have funded twenty-seven new clinics and medical centers, and made VA healthcare more accessible for veterans without service-related injuries. It would have strengthened dental, chiropractic, fertility and sexual trauma care. It would have extended a job training program and given veterans better access to higher education by making more of them eligible for in-state tuition. Spouses of deceased service members and families caring for wounded veterans would have received better support.

Unsurprisingly, Republicans said the $21 billion package was too expensive. “This bill creates new veterans’ programs and it’s not paid for—it’s all borrowed money,” Senator Jeff Sessions said before raising a budget point of order that effectively killed the legislation by requiring sixty votes to proceed. Only two Republicans, Dean Heller of Nevada and Jerry Moran of Kansas, voted with the Democrats, leaving the motion to waive the point of order a few votes shy of passage.

“If you can’t afford to take care of your veterans, then don’t go to war,” Senator Bernie Sanders, the chairman of the Committee on Veterans Affairs, said on CNN shortly before the vote. Sanders proposed paying for the bill with savings from the drawdown in Iraq and Afghanistan; the expenditures amounted to less than 2 percent of those savings, and would have directly benefitted the soldiers who fought those wars. (Which, incidentally, themselves added $2 trillion to the debt.) Furthermore, according to an updated score from the Congressional Budget Office, the bill would actually have decreased the deficit by $1.34 billion over the next decade.

“I think we should be very, very clear that the cost of war does not end once the last shots are fired and the last battles are fought. When members of the military lose arms, legs, eyesight, come back with PTSD or TBI, after fighting in wars that Congress authorizes, we have a moral obligation to make sure that those veterans receive all of the benefits that they have earned and deserve,” Sanders said on the floor.

Besides cost, Republicans had an even pettier reason for opposing the bill: they were furious that they weren’t able to tack new Iran sanctions onto it. Democrats have backed away from the issue, and Republicans inserted the sanctions language in their version of the veterans legislation in an attempt to keep it alive. Veterans groups sharply criticized Republicans on Wednesday for such a political move. “Iran is a serious issue that Congress needs to address, but it cannot be tied to S. 1982, which is extremely important as our nation prepares to welcome millions of U.S. military servicemen and women home from war,” Dellinger said.

Sanders promised to keep fighting for a comprehensive veterans package, and said he would work to round up the handful of Republican votes needed to pass the legislation.

The media has already declared the veterans bill a “victim of election year gridlock.” But let’s be clear: the bill was a victim of Republican legislators, many of whom trot out their support for the troops to great rhetorical effect during election years.