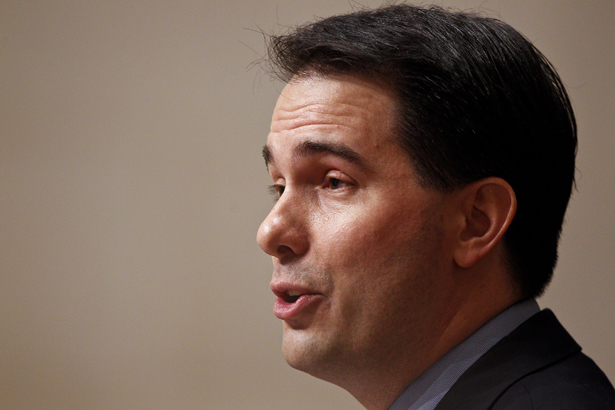 When Gogebic Taconite LLC began moving in November 2010—the same month Scott Walker was elected governor of Wisconsin—to develop an open-pit iron mine in one of the most environmentally sensitive regions of northern Wisconsin, the Florida-based mining firm got a lot of pushback. Residents of the region objected, along with Native American tribes. So, too, did citizens from across Wisconsin, a state that has long treasured the wild beauty of the Penokee Range. Environmental and conservation groups voiced their concerns, as did local and state officials from across the political spectrum.

The outcry heightened as Gogebic Taconite and its allies promoted a radical rewrite of existing mining regulations in order to promote a project that could grow to be four miles long, more than a mile wide and 1,000 feet deep. Democratic and Republican legislators began to ask tough questions. Yet Governor Scott Walker — who as a state legislator had supported strict mining regulations —  remained “eager to advance a mining bill.”

Wisconsin media outlets reported extensively during the 2011 and 2012 on the governor’s determination to overrule objections to the grand schemes of an out-of-state corporation. Now, those same media outlets are reporting on  newly released documents that show the mining firm secretly steered $700,000 into “independent” efforts to provide political cover for the embattled governor.

The documents, released as part of legal wrangling over a “John Doe” investigation into alleged fund-raising abuses during the recall elections of 2011 and 2012, have revealed both big contributions and big concerns on the part of a key investigator about “an appearance of corruption.”

Walker, of course, denies any wrongdoing, as does Gogebic and the group that managed the money.

Yet there is no question that the governor provided substantial support for the mining company. During a long, high-profile battle, he dismissed and denied a broad array of objections to Gogebic’s plans.

The Nature Conservancy argued that the proposed changes to Wisconsin mining regulations would “pose serious risks to the rivers, lakes, wetlands, groundwater and other natural resources.”

The Sierra Club announced that “the largest ever mine proposed in Wisconsin presents unacceptable risks to Lake Superior and the sensitive and exceptional Bad River Watershed which includes…the largest freshwater estuary on Lake Superior.”

“It’s devastating,” said Annie Maday, a member of the tribal council of the Bad River Band of Lake Superior Chippewa, which argued that the mine could destroy wild rice beds and pollute waters on its nearby reservation. “They’re going to destroy my home.”

State Senator Dale Schultz, a Republican who broke with his party to oppose the mining legislation at several key points, said, “My conscience simply won’t allow me to surrender the existing environmental protections without a full and open debate.”

When the controversial rule changes were approved by the legislature in 2013, Walker announced that he was “thrilled” to sign the bill.

What went unmentioned at the time was the extent to which Gogebic Taconite was “thrilled” with Walker.

The documents that were briefly unsealed last week by the US Court of Appeals for the Seventh Circuit—which is weighing whether to permit the continuation of the “John Doe” probe into alleged illegal coordination between Walker’s campaign and so-called “independent” groups that supported the governor—shined light on the shadowy political networks that developed to aid Walker. The Milwaukee Journal Sentinel noted that the “hundreds of pages of documents that… showed Walker’s team sought to solicit funds for the Wisconsin Club for Growth from an array of nationally known donors to fend off his 2012 recall. Real estate developer Donald Trump, industrialist billionaire brothers Charles and David Koch, and casino mogul Sheldon Adelson were all targets.”

The documents reinforce the image of the governor, who is seeking re-election this fall and preparing a 2016 Republican presidential run, as a master political operative who worked every angle to secure record amounts of money for his own campaign and for “independent” groups that were supportive of it. In one of the unsealed documents, a fund-raising aide consulting with Walker before he met with wealthy donors advised: “Let them know that you can accept corporate contributions and it is not reported.”

The documents reveal details of a number of huge and previously unreported donations. Yet the one that raised the most eyebrows had to do with the mine project.

As the recall fights heated up, Gogebic Taconite moved $700,000 to the Wisconsin Club for Growth, which in turn steered resources to other groups that cheered on Walker and his Republican allies.

“Because Wisconsin Club for Growth’s fundraising and expenditures were being coordinated with Scott Walker’s agents at the time of Gogebic’s donation, there is certainly an appearance of corruption in light of the resulting legislation from which it benefited,” argued Dean Nickel, the former head of the state Department of Justice’s Public Integrity Unit who investigated the fund-raising scheme for the state Government Accountability Board.

Walker has admitted that he helped steer money to the Wisconsin Club for Growth, but when asked whether he knew of the Gogebic money, he answered vaguely, “Not to my knowledge.” Pressed by reporters on whether “the previously undisclosed funds and subsequent legislation were part of some pay-to-play scheme,” the governor replied, “That’s a ridiculous argument.”

The governor has every right to make that claim, as do his most ardent apologists.

But in Wisconsin, a state that historically took great pride in its clean elections and high ethical standards, voters have a right to ask, based on records and revelations, whether it really is all that ridiculous to find in them “an appearance of corruption.”