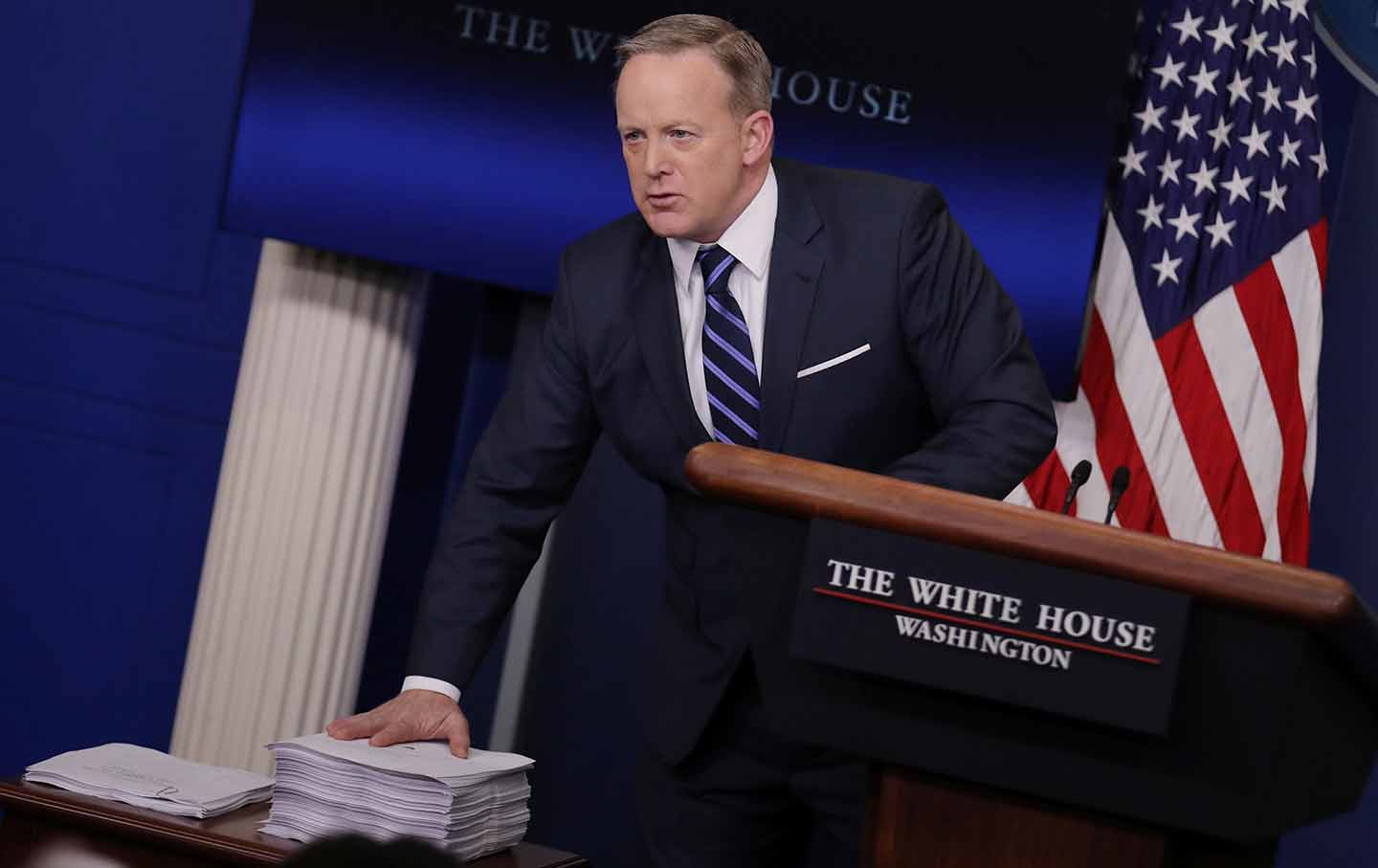 Sean Spicer places his hand atop a stack of ACA papers next to replace-and-repeal paperwork by House Republicans on March 7, 2017. (Reuters / Carlos Barria)

White House Press Secretary Sean Spicer appeared to be imitating Melissa McCarthy’s Saturday Night Live imitation of him when he tried to make the argument for replacing Obamacare with Trumpcare by placing a copy of the final version of the 974-page law next to the sketchy Republican substitute.

Forget about the contents, argued Spicer. “Our plan, in far fewer pages, 123—much smaller, much bigger—so far we’re at 57 for the repeal plan and 66 pages for the replacement portion. We’ll undo this. And remember, half of it, 57 of those pages, are the repeal part. So when you really get down to it, our plan is 66 pages long, half of what we actually even have there.”

“[Look] at the size. This is the Democrats, this is us. You can’t get any clearer in terms of this is government, this is not,” said Spicer during Tuesday’s press briefing, as he moved back and forth, hovering over the two stacks of paper. “And I think that part of the reason the visual is important is that when you actually look at the difference, you realize this is what big government does.… I think the greatest illustration of the differences in the approaches is that size.”

Support for the Affordable Care Act has soared, as Americans say they want it expanded—not repealed.

But it was another Spicer statement—or, to be more precise, alternative fact—that should have gone viral, that should have been noted by the reporters in the room, and by the commentators on the Republican plan to replace the Affordable Care Act with a scheme that Arizona Congressman Raul Grijalva says “ends affordable healthcare,” and that Congressman Keith Ellison says “hurts nearly all working Americans by gutting Medicaid, defunding Planned Parenthood, stripping protections and benefits and increasing costs.” “At the same time,” notes Ellison, “it provides a huge handout to the wealthy and insurance corporations. Which begs the question: who exactly are the Republicans trying to help with this legislation?”

The Spicer alternative fact that ought to be reported, and addressed, is a repetition of the spin that has been used by President Trump, Vice President Pence, and House Speaker Paul Ryan to peddle their latest scheme to redistribute wealth upward.

“This is the Obamacare replacement plan that everyone has been asking for, the plan that the President ran on, and the plan that will ultimately save the system,” the White House press secretary announced in the takeaway quote of the day.

Apart from the fact that the plan proposed by Trump and Ryan makes things worse (as opposed to saving the system), and apart from the fact that Trump ran on roughly a dozen different health-care platforms (flirting with everything from single-payer to survival-of-the-fittest, but always promising to make things “great”), there is no truth to the statement that “this is the Obamacare replacement plan that everyone has been asking for.”

The claim that everyone was asking for this plan, or even for a replacement of the Affordable Care Act, is an alternative fact. It’s fake news. It’s a lie.

Poll after poll after poll provides an illustration of the truth. And so, since Spicer is so enamored of illustrations, let’s turn to them. Check out the headlines that appeared in the weeks before the Republican plan was released:

Survey research tells us that the popularity of the Affordable Care Act is rising. Rapidly.

New polling from the Pew Research Center finds that 54 percent of Americans approve of the ACA, while 43 percent oppose it. That, reported CNN, is the highest level of support for President Obama’s health care–reform measure ever recorded by Pew. The latest polling data from the Kaiser Family Foundation tells us that the ACA has “the highest level of favorability measured in more than 60 Kaiser Health Tracking Polls conducted since 2010.”

Polling numbers fluctuate. But here is the interesting twist: Surveys frequently show that, among those who favor altering the ACA, most want it to be made stronger—not weaker, as Trump, Pence, Ryan, and Spicer propose.

A new McClatchy/Marist survey, released a few days before Spicer’s press conference, found that 65 percent of Americans would like to see portions of the Affordable Care Act retained. According to The Hill, “Twenty percent say lawmakers should let the health care law stand as is, while 38 percent want any changes to enable it to do more and 7 percent hope alterations make it capable of less.”

Why would Spicer peddle the fantasy that Americans called for the Republican plan, when that is clearly not the case?

Maybe Spicer is lying because the truth is inconvenient.

Maybe Spicer is lying to himself.