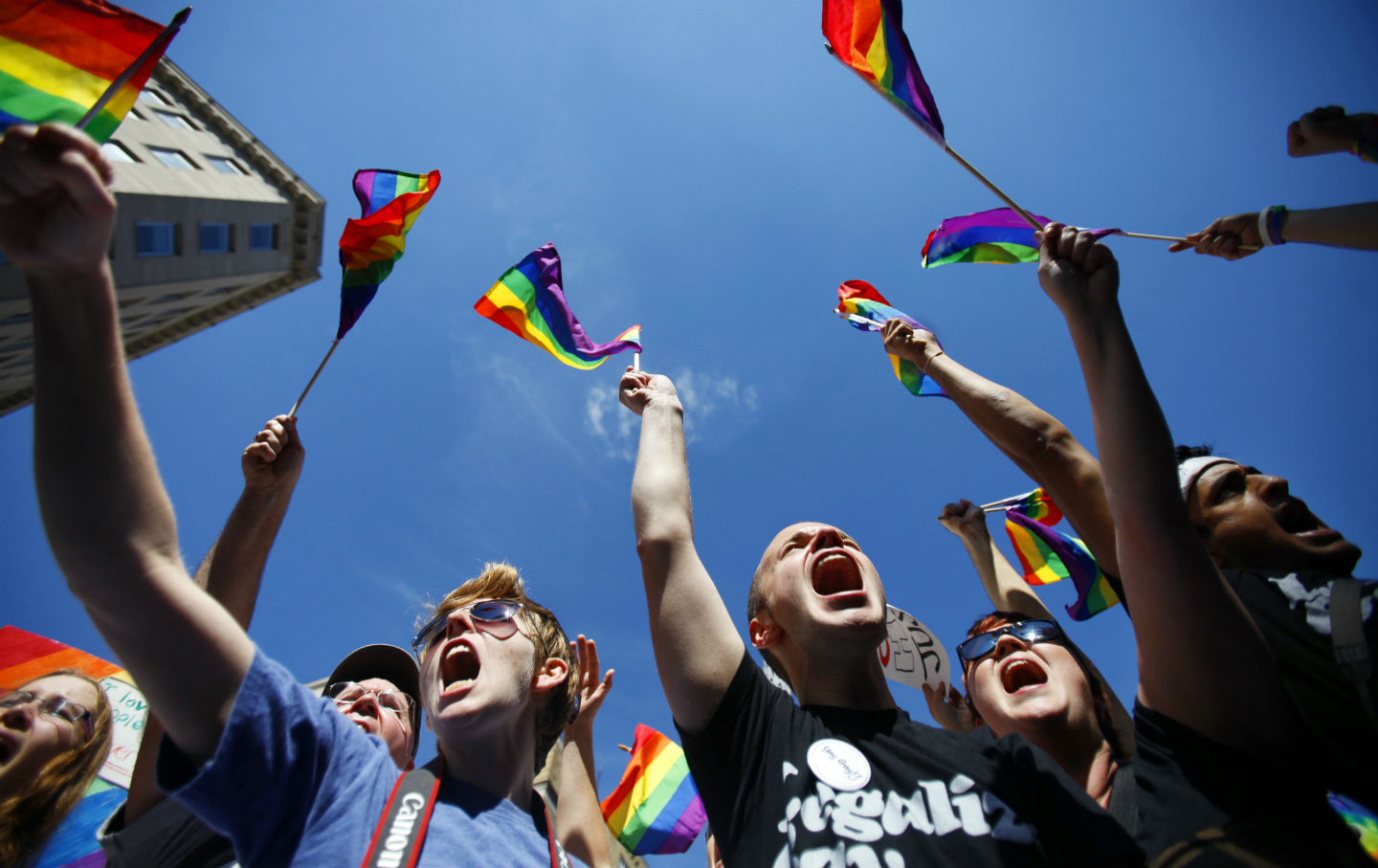 Next Tuesday, the Supreme Court will hear one of the most eagerly awaited arguments in its history: the claim by same-sex couples to a constitutional right to marry that is enforceable in every state. Though none of the LGBT advocacy groups wants to jinx the outcome with a triumphalist claim that victory is certain, it is difficult to make a convincing case that Justice Anthony Kennedy, the perennial swing vote, will balk at extending his prior gay rights rulings to encompass nationwide access to marriage. Justice Antonin Scalia, his most vocal opponent on the issue, has been predicting the inevitability of such a ruling for 12 years, since the Court struck down a sodomy law as unconstitutional. On this, if nothing else, Justice Scalia seems almost certain to be vindicated.

Even the most intense optimists, however, realize that although the social conservative base is diminishing judicially as well as demographically, it is hardly dead. When the Court announces its ruling, due by the end of the current term in late June, the decision will mark a new baseline for state regulation of sexuality and the family, but the debates will not end.

On the progressive side of the register, one hopes that there will be space for concerns that have been sidelined in the heat of the marriage contests. Prime among them is the need by the great majority of same-sex households, like all other households, for more egalitarian economic policies. Researchers such as Lee Badgett and Gary Gates at UCLA’s Williams Institute have documented with Census data just how urgent those needs are. LGBT households, for example, widely and wrongly believed to be especially affluent, have higher than average poverty rates and would benefit enormously from an increase in the minimum wage. And if one measures anti-gay subordination by its intensity, the greatest attention should turn to transgender and racial minorities and youth (see the work of Bianca Wilson). (Disclosure: I hold the title of Distinguished Scholar at the Williams Institute, but did not work on these studies.)

The opening of marriage to same-sex couples will also clear the way for policy debates about the menu of options for recognition of couples—gay or straight—who choose not to marry. Some states have left civil union or domestic partnership status categories in place after same-sex couples could marry—others have abolished them. Unmarried partners of all orientations will continue to have property and custody fights when relationships end, and courts will still have to decide how much, if any, weight to give marital status in those situations. Will a legal victory for gay marriage be seen as strengthening the principle of choice or the policy of quasi-mandatory marriage?

Meanwhile, social conservatives have already staked a claim to their new political offensive: the effort to broaden the scope of religious exemptions from anti-discrimination laws, so that a range of individuals and entities can deny service to same-sex couples, at least when goods and services are directly related to marriage ceremonies. This effort stumbled badly last year in Arizona and this year in Indiana and Arkansas, when corporate interests forced conservative politicians to back down from adding such provisions to state laws. Corporations fearful of alienating their own demographic holy grail—youth and young adults—in both the labor force and the consumer marketplace proved once again that a rupture between the Tea Party and the Chamber of Commerce is no contest. The smart money is on the money.

The religious accommodation issues are more complex than the world of bakers and florists, however. Everyone understands that no clergy member can be forced to perform a wedding for a same-sex couple any more than she can be forced to perform one for an interfaith couple. Nor can a congregation be required to treat a same-sex couple as married for religious purposes. In every state that has enacted legislation to incorporate marriage equality, religious entities are permitted to favor or disfavor couples when renting their facilities for a wedding or offering marriage counseling.

But the state of play reflected in these legislative compromises over facilities has never satisfied religious conservatives. An amicus brief filed by Professor Douglas Laycock of the University of Virginia Law School supports the right of same-sex couples to marry, but also asks the Court to look favorably on many likely claims for religious exemptions: a huge range of services offered to the general public by religiously-affiliated colleges, hospitals, adoption agencies and nursing homes; qualification for public money to support those services; the licensing and accreditation standards for such professions as counseling; and—the biggest scare of all—eligibility for tax exemptions.

The cases before the Supreme Court do not present these issues, and thus there is no need for the Court to address them. But Professor Laycock is highly respected as a scholar of religion and a Supreme Court advocate. One thing to watch for in oral argument will be whether any of the Justices picks up on the exemption question and how advocates for same-sex marriage respond.

What will unquestionably consume the two-and-a-half hours of argument, involving the laws of four states, will be the issues that have been rehearsed and rehashed so many times. Does the law’s recognition of a fundamental right to marry encompass same-sex marriage or is that categorically different? Does the exclusion of same-sex couples violate the Equal Protection Clause, or do states have a rational basis for allowing only different-sex couples to marry? Should classifications based on sexual orientation required a stronger than merely rational basis to be justified, as do classifications based on race or sex? Should classifications based on sexual orientation be treated the same as sex discrimination because, given the underlying gender stereotyping, that’s what they are? Or, is the exclusion of lesbian and gay couples from marriage so deeply irrational that it fails even the weakest constitutional test?

The defenders of the marriage exclusions have taken their cue from Judge Jeffrey Sutton of the United States Court of Appeals for the Sixth Circuit, who wrote the opinion that is now on appeal. In upholding the bans, he answered each of the foregoing questions with the standard judicial conservative answers, essentially that only a highly deferential rational-basis standard is required when courts consider the constitutionality of these laws. And on a rational-basis assessment, the states have leeway to structure the law of marriage around the presumptive unassisted procreative actions of different-sex couples, even if not all different-sex couples raise children and some same-sex couples do.

What is new in his opinion, which the states have adopted in their briefs, is the centrality it gave to the power of states. Rather than framing the core question as about what the definition of marriage should be or who is a better or worse parent, Judge Sutton put the question of who will decide at the heart of his analysis. Most regulation of marriage is done by states; the conservatives’ claim is that the power of states in this field is essentially plenary. With Justice Kennedy’s deep belief in dual sovereignty—that is, the conception that states are sovereigns as is the federal government—the right of different states in a federalist system to decide this question differently is the strongest argument defenders of the exclusions can make.

The problem with it is that, however sovereign the states may be, their regulation of marriage cannot infringe core individual liberties protected by the Constitution. A justice who wants to start down that path will run directly into the Supremacy Clause (federal law trumps state law if there is a conflict between the two) and Loving v. Virginia, the decision that invalidated laws prohibiting interracial marriage. Conservatives argue that Loving does not apply because racial lines did not implicate the “true” meaning of marriage, but that altering the gender boundaries does redefine marriage. In other words, marriage can only be what marriage has been because, well, it’s marriage. And that argument sounds circular because, well, it is.

Is it possible that the states rights/traditional marriage arguments will prevail? Of course, nothing is over at the Court until the decision is announced. Keep in mind that the Court asked for two distinct questions to be briefed and argued: whether the Constitution requires that a state grant marriage licenses to same-sex couples; and whether, if not, a state must nonetheless recognize same-sex unions lawfully performed in other states. Conceivably, the justices could split the difference by answering no to the first and yes to the second. Given that the Court has allowed interim court orders to take effect that require recalcitrant states to issue such licenses, however, a compromise result seems unlikely.

At least some justices almost certainly would have preferred to delay resolution of the marriage-equality question until more states had changed their laws by majoritarian legislative decisions. But two years ago, the Supreme Court struck down the “Defense of Marriage Act,” which forbade federal agencies from recognizing same-sex marriages valid under state law. With only the validity of state law prohibitions still in question, the result was acceleration rather than delay. Within a year, challenges to marriage exclusions were filed in every state where the bans had not already been repealed or struck down, and the overwhelming majority of lower- court judges who ruled in these cases found those laws unconstitutional. The Court now has no choice but to put to rest the more fundamental question. Time to bite the bullet and move on.