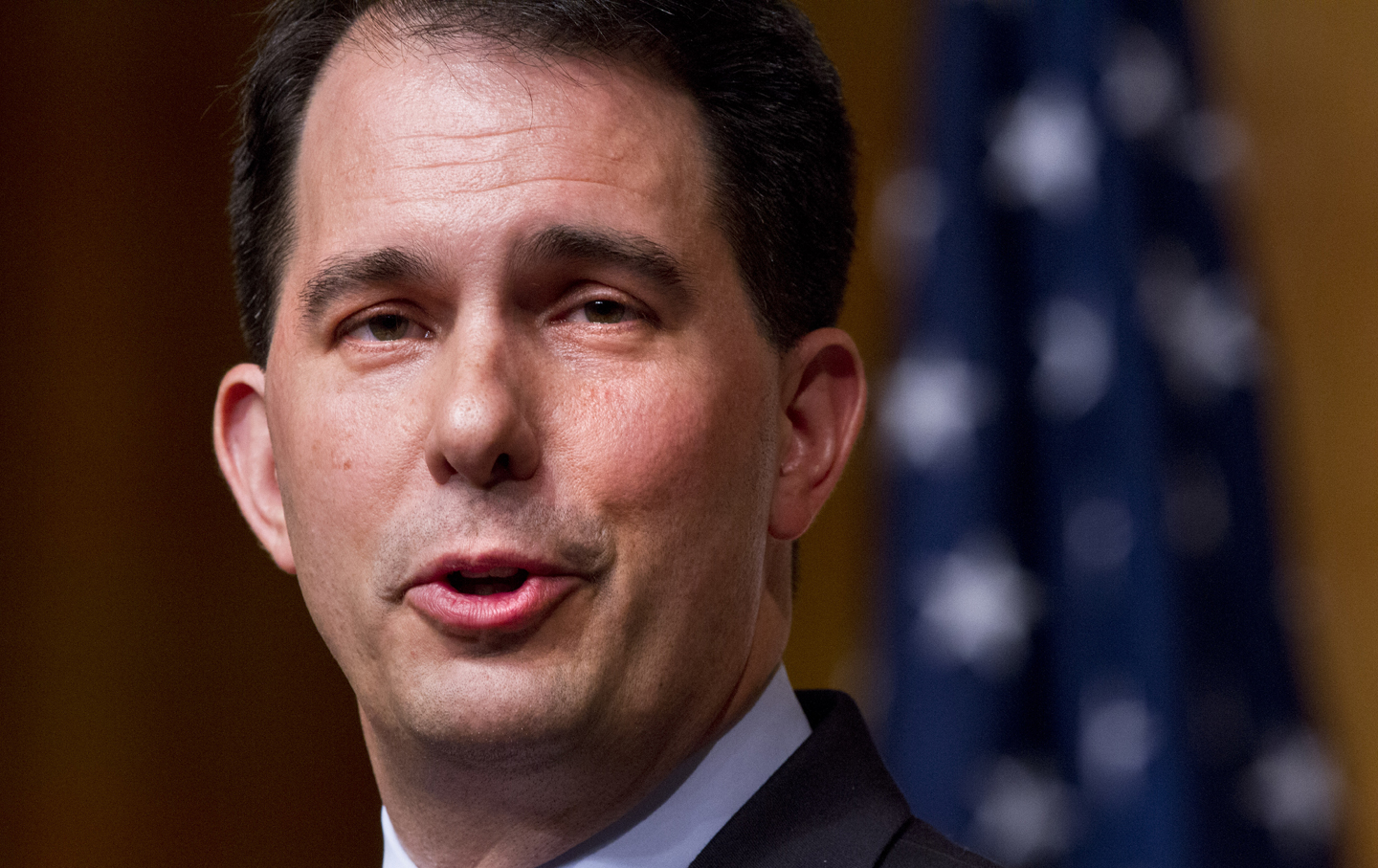 As he prepares to launch his 2016 presidential bid, Wisconsin Governor Scott Walker is caught up in a hometown controversy that is going from bad to worse.

The governor—whom former White House counsel John Dean refers to as “more Nixonian than Nixon”—has never been much for transparency. But a botched attempt by his legislative allies to gut the state’s open-records law has blown up on Walker in a big way.

Without public hearings or meaningful debate, the 12 GOP legislators moved at the very last minute of the committee’s budget deliberations to insert a radical rewrite of standards governing public access to information about how legislation is developed and how elected officials carry out their duties.

What these legislators proposed was an end to transparency in Wisconsin, with a sweeping plan to shut down the avenues by which citizens and journalists can monitor the most significant actions of Walker’s administration, Walker-controlled state agencies, and the Legislature.

Wisconsin Freedom of Information Council President Bill Lueders got it exactly right when he said after the committee voted 12-4 for the plan: “Our state’s tradition of open government is on the line.”

“Somebody in this building has something to hide." — State Senator Jon Erpenbach

Wisconsinites rallied in opposition to the attack on open government. Republican Attorney General Brad Schimel declared, “Transparency is the cornerstone of democracy, and the provisions in the budget bill limiting access to public records move Wisconsin in the wrong direction.” Republican state Senator Rob Cowles, R-Green Bay, said Friday he would vote against the entire budget if it included the changes—the only appropriate response for legislators—and announced, “I was shocked and appalled to see the attack on open and transparent government last night by the Joint Committee on Finance. Limiting public access to legislative communications and records is against all I have stood for while in office, and I will not support a budget that includes this assault on democracy.”

Conservative media outlets objected, as did progressive media outlets. After sending mixed signals initially, Walker scrambled to get Republican legislators and the co-chairs of the Joint Finance Committee together for a Fourth of July announcement that “the provisions relating to any changes in the state’s open records law will be removed from the budget in its entirety.”

But Walker danced around questions about whether he or his aides were involved in the ham-handed attempt to make it dramatically harder for citizens and journalists to review his official actions at a point when he is stepping onto the national stage.

That’s understandable, as getting caught out on an attempt to undermine open government is not usually considered the right move on the eve of announcing one’s presidential candidacy.

But Walker’s legislative allies were not about to take the rap for a governor who has not spent much time maintaining relations with the legislature as he bids for the White House.

Asked if Walker’s office was involved in developing what watchdogs referred to as a jaw-dropping assault on open-records rules, Republican state Senate majority leader Scott Fitzgerald said, “Sure. Yeah.”

Fitzgerald specifically acknowledged discussions about “open records issues and the amount of requests the governor gets.”

Pressed on the same issue, Republican Assembly Speaker Robin Vos admitted that “almost all of us on the leadership team” had a hand in the rewrite.

Stories about the fiasco led the broadcast news cycles in Wisconsin—a state that has historically taken open-records issues very seriously—and was across the front pages of newspapers.

By Tuesday, the governor’s office was in damage-control mode.

A statement from Walker’s press team acknowledged that the governor’s office was involved in discussions about the rules changes, yet still tried to position the governor as a champion of transparency: “Our focus remains on ensuring open and accountable government, and we encourage public debate and discussion of any potential future changes to the state’s open records law.”
How’s that?

“Our intent with these changes was to encourage a deliberative process with state agencies in developing policy and legislation,” the statement said. “This allows for robust debate with state agencies and public employees over the merit of policies and proposed initiatives as they are being formed, while ensuring materials related to final proposals, as well as information related to external stakeholders seeking to influence public policy, would remain fully transparent.”

Everyone recognized that the intent of the changes was to inhibit transparent government.

The four Democrats on the Joint Finance Committee—state Senators Lena Taylor, of Milwaukee, and Jon Erpenbach, of Middleton, and state Representatives Chris Taylor, of Madison, and Gordon Hintz, of Oshkosh—recognized the threat immediately. They tried to thwart the insertion of the changes in the budget plan. And when the changes were inserted, Democrats and Republicans, liberals and conservatives, citizens and journalists immediately objected.

Critics asked then, and they continue to ask, where the push for these changes started—and why the advancement of the changes suddenly became such an urgent matter.

Walker’s not answering those questions.

But they were not going away.

“Somebody in this building has something to hide,” declared state Senator Erpenbach.

State Representative Hintz, another Democrat who serves on the Joint Finance Committee, has said that committee Republicans “made it clear to us that [the governor had] signed off on motions—including open records changes.”

State Senator Dave Hansen, a veteran Democrats with long experience on budget issues, says, “You have to understand how Joint Finance works. It comes from the leadership of the Assembly and Senate, and with the governor.”