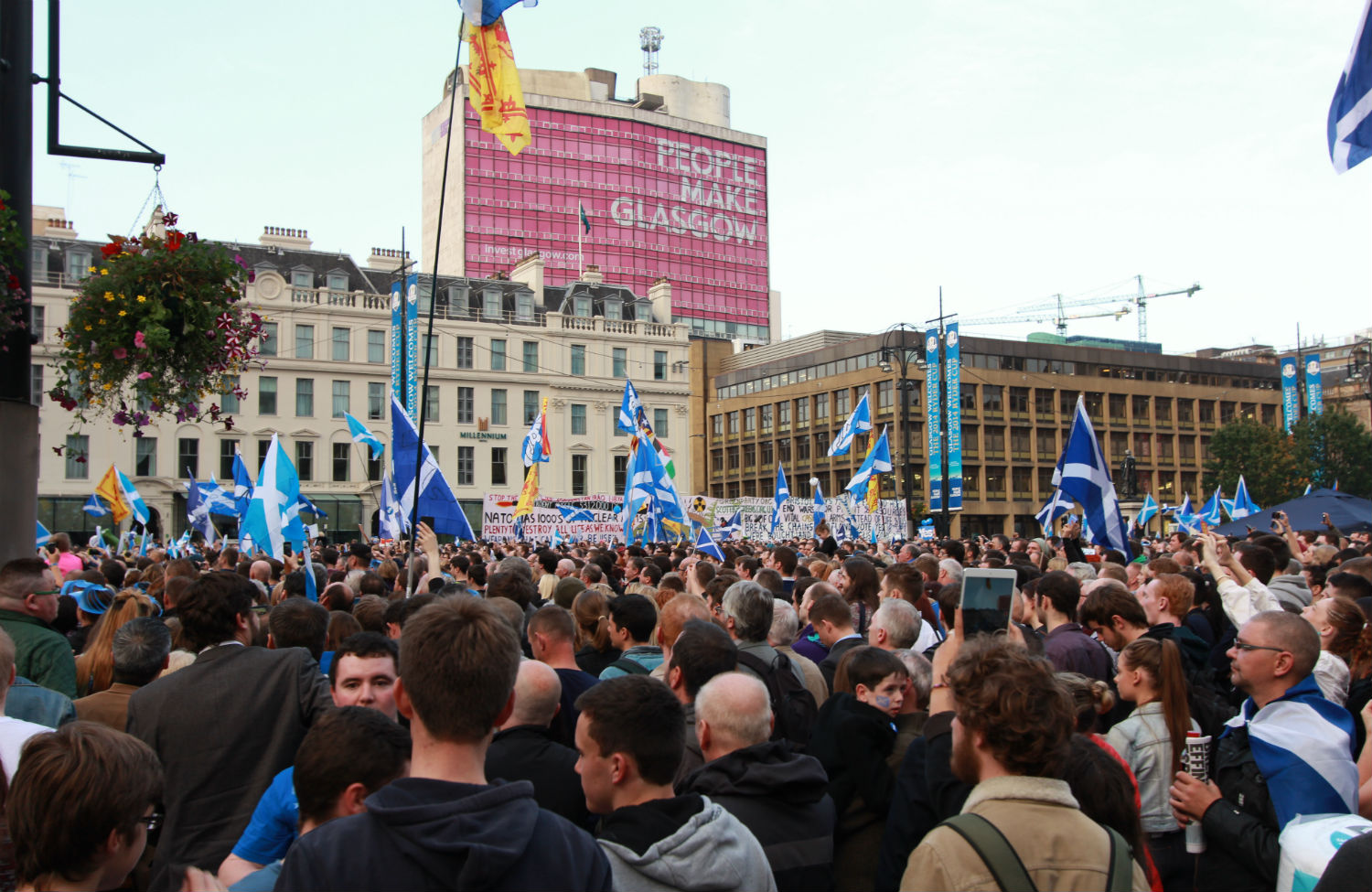 Edinburgh, Scotland—If you want to know what democracy looks like, come to Scotland.

No matter how today’s independence referendum turns out—and the polls says it is likely to be a close result—there can be no doubt that Scotland’s venerable The Herald was right when the newspaper declared this week that “the atmosphere in Scotland is extraordinary.”

What makes it extraordinary is the extent to which the whole of Scotland is engaged with this referendum vote. Rallies and marches organized by “Yes” and “No” campaigners have drawn thousands, mass canvasses have gone to every doorstep and it has been virtually impossible to walk down the street in any community without encountering an earnest appeal to consider, or reconsider, how to vote.

Voter registration has soared since the referendum was announced, creating the largest electorate in Scottish history. A remarkable 97 percent of eligible Scots are registered, and polls suggest that well over 80 percent of the electorate will participate in the vote on whether to break away from the United Kingdom.

Jonathon Shafi, a co-founder of Scotland’s Radical Independence Campaign, which organized mass registration drives among young people and in low-income neighborhoods, calls the 97 percent figure a “testament to a movement which has been engaging with thousands of people over the past two years.” Shafi says Scots see the referendum vote as “a huge opportunity to restore democracy.”

In fact, the campaign leading up to today’s vote has already restored a good measure of democracy—by showing how to engage a mass electorate and inspire mass turnout.

Since the referendum vote was scheduled, more than 300,000 Scots have registered to vote, pushing the total electorate to 4,285,323. An equivalent increase in the United States would see a registration spike numbering in the many millions over the course of a relatively short campaign.

Take a moment to ponder what a turnout in excess of 80 percent—perhaps as high as 90 percent—would mean in the United States: instead of the 130,292,355 Americans who had ballots counted in 2012 (out of a voting-eligible population of 221,925,820, according to the United States Elections Project at George Mason University), the turnout total would be closer to 180,000,000.

That level of turnout, creating a voting class that is dramatically more reflective of the overall US population, would undoubtedly transform not just elections but also policy debates.

So is the lesson that the United States should start scheduling high-stakes national referendums on fundamental questions regarding the nation’s future? That’s not a novel notion; indeed, it was proposed by the progressive reformers of a century ago. Many states adopted initiative and referendum structures, which remain in place to this day. In the 1924 presidential election, the Republican, Democratic and Progressive party platforms all endorsed national referendum proposals. Ultimately, however, the United States did not go the way of much of the rest of the world when it comes to national referendums.

At a time when American political campaigns are distinguished by nothing so much as their pettiness and when governing is so frequently ineffectual, however, the idea of using initiatives and referendums to settle major questions has appeal. A 2013 Gallup Poll found that 68 percent of Americans favor national referendums on vital issues that are raised by voter petitions for a popular vote.

Yet there is more to what Scotland has done than simply scheduling a referendum.

The process matters, as it always does when pursuing democracy.

And the Scots have done a lot of things right.

1. An expanded electorate. Recognizing the high level of interest in the independence vote, and the fact that its result will shape the lives of generations to come, officials lowered the voting age to 16. That increased the size of the overall electorate, and it also shifted the tenor of the debate, placing a greater focus on issues of interest to young people. As a result, polls show close to 80 percent of potential voters in the 16–24 demographic intend to cast ballots—an astronomical figure compared to US elections.

2. Simple ballot, simple question. Clarity in ballot design and wording matters immensely, as was illustrated by the 2000 electoral meltdown in Florida, with all its butterfly ballots, hanging chads and “under-votes” and “over-votes.” With so contested an issue on independence in play, any attempt to game the process or cut corners would have come back to haunt. The Scottish vote will not include multiple contests and questions. There is one issue on the ballot and the wording of the actual question was reviewed, debated and reframed to remove bias and complexity. What resulted was simplicity itself, a chance to vote “yes” or “no” on the question: Should Scotland be an independent country?

3. Limited Spending, lots of grassroots campaigning. Scotland strictly limits campaign spending, and there are no thirty-second TV or radio spots. This reduces costs for the campaigners and keeps negative advertising from flooding the airwaves. It also changes the character of the campaign. Unlike in the United States, where voters often reach Election Day with a sense of exhaustion and deep disenchantment, Scots have remained remarkably enthusiastic about a process that is far more focused on grassroots campaigning.

4. Lots of debates. Scottish First Minister Alex Salmond, the leading campaigner for a “yes” vote, and former Chancellor of the Exchequer Alistair Darling, a Scottish member of the British Parliament who has represented the “no” camp, have faced off in extended debates in the six weeks leading up to the election, taking questions from journalists and citizens. But that is just the start of it: Scottish television and radio programs, as well as the opinion pages of Scottish newspapers, feature daily debates. And even the smallest communities in Scotland have seen organized events where “yes’ and “no” campaigners go at it.

5. Easy voting. The Electoral Commission, which is charged with overseeing the election, has run its own “You Can’t Miss It” campaign to increase voter registration and participation, and to assure that voters know where and how to vote. Unlike in the United States, where different states—and even different jurisdictions within states—produce distinct sets of rules regarding who can vote, when and where voting takes place and how votes are counted, the Electoral Commission sets universal standards. And those standards encourage high turnout by making it easy to vote. Arrangements have been made for 789,024 postal voters: Scots who have difficulties making it to the polls. And those who vote September 18 will not have to go far. A total of 5,579 polling stations will be open from 7 am to 10 pm September 18.

6. Majority rule. Elections in the US are often complicated by rules that make it difficult to get a definitional result; for instance, there have been efforts in a number of US states to require so-called “super majorities” to decide referendums on critical issues. The additional requirements foster frustration with the process by telling voters that winning isn’t enough. Democracy works best when voters believe the process is fair and that their ballot could be decisive. That’s the standard Scotland has set for referendum voting, as 50 percent plus one—be the balance on the “yes” side or the “no” side—will determine if independence is to be.

US officials aren’t about to schedule national referendums on critical issues anytime soon. But they should take a serious look at the systematic approach Scotland has taken to boosting turnout and voter engagement. This is what democracy looks like.