By the time wildfires tore through his home county of Sonoma, California, Park Guthrie was already convinced that the clock on the climate catastrophe was running out. In 2015, Guthrie, a sixth-grade teacher and father of three, had approached the superintendent of the school district where he worked, hopeful she would sign a resolution endorsing action on climate change. He says he got nowhere.

This story about climate-change advocacy was produced by The Hechinger Report, a nonprofit, independent news organization focused on inequality and innovation in education. Sign up for Hechinger’s newsletter.

But after attending an advocacy event in Washington two years later, and hearing that the US government has known of the dangers from burning fossil fuels for a half-century, Guthrie decided to think bigger. In July 2017, he started a campaign called Schools for Climate Action. He set up meetings with leaders of other nearby school districts, pressing them to declare climate change an urgent issue that is harming kids.

Then the Tubbs Fire hit, leaving 1,400 children in Sonoma County homeless, devastating six school buildings, and bringing classes to a halt for weeks. Guthrie and his children had to put on smoke-protection masks to attend a county-board meeting where members were scheduled to vote on a climate resolution. At the time, October 2017, the Tubbs Fire was the deadliest wildfire in California history, but it would be eclipsed the next year by the Camp Fire, which leveled the town of Paradise. Six of the worst wildfires in California history have occurred in the past four years.

Guthrie believes that doing nothing in the face of climate change amounts to child neglect, and not only because today’s children face a grim future if nothing is done. Global warming is already contributing to extreme weather that’s closing schools, worsening air quality, leveling communities, and destroying their property-tax base, which is zapping money for education. Public-health experts have lined up in support of 21 students who sued the federal government over climate inaction, arguing that young people are particularly vulnerable to physical and emotional harms exacerbated by global warming, such as increased rates of asthma and heat stroke, and elevated levels of anxiety and PTSD.

Because his job involves working with children, Guthrie is mandated under California law to report any suspicion of child abuse and neglect to authorities. “If I suspected neglect of an individual student and did nothing, my silence would literally be criminal,” he said. “This is wholesale child neglect.… And statistically, zero percent of education leaders have reported on this neglect.”

He’s trying to change that. So far, 46 school boards have signed resolutions like those advocated by Guthrie’s group, recognizing that climate change is harming America’s schools and students and urging Congress to take action. Seven PTAs and two national and state education groups have also signed on. Guthrie notes that school boards and other education groups regularly make the case to legislators that they should act in the best interest of children, so the silence of education groups on this particular issue “is one of the pillars that protects national climate inaction.” He added, “There is absolutely nothing from the education sector that would give them [lawmakers] the idea that they are making reckless decisions or that their decisions negatively impact young people.”

Katherine Cowan, director of communications for the National Association of School Psychologists, said that, for now at least, her group doesn’t have the time or capacity to weigh in. “We are a respected organization on policy issues, because we stay focused on the things that are, I hate this term, in our wheelhouse and are of the utmost importance,” she said. “As much as we think climate change is important, and we applaud these guys for doing their work, this just isn’t something we have the ability to focus on right now.”

But Chris Ungar, a retired special-education director in San Luis Obispo, California, and a board director of the National School Boards Association, pointed out that schools and students are, regrettably, already accumulating expertise in the harms that come with climate change. Ungar also serves on the board of his local school district, and one of its high schools sits no more than 400 yards from the ocean. “Every member of our school board is concerned about climate change,” he said, citing not only local worries around coastal erosion and flooding but also the state’s intensifying droughts and elevated risks of the fungal disease known as valley fever.

This March, Ungar led an effort to persuade the National School Boards Association to adopt a statement on climate change at its annual meeting. He’d drafted it with representatives of the school-board association’s Pacific region, which includes Alaska, Arizona, California, Utah, and four other states. “Each of our states has been and will be affected by climate change,” he said.

On the eve of the vote, members of the group’s Florida delegation sought to focus the resolution solely on disaster relief and strip out language on climate change. The next day, the full delegation voted narrowly in their favor. “The Florida position was, we want Congress to support disaster relief no matter what causes it,” explained Andrea Messina, the Florida School Boards Association’s executive director.

“It just surprised the heck out of me,” said Ungar. “I felt, what more could I have done to convince people that this is hugely important, that it’s going to have a tremendous impact on our students.” Florida is already being pummeled by hurricanes that scientists say are intensifying as a result of climate change. Last year, in the Florida panhandle, notes Ungar, Hurricane Michael temporarily shut down school in 28 districts. He said the Florida delegates could have brought up their own resolution limited to disaster relief.

Messina said the delegates didn’t want a resolution to distract from advocacy for disaster relief and called climate change “a political issue.”

Yet school boards often take on issues that may be perceived as political or partisan. Some, for example, have declared their districts “safe havens” for immigrant students. Just a few weeks ago, the board of the Los Angeles Unified School District issued a resolution condemning the recent spate of anti-abortion laws that have passed in states across the country.

“A lot of these associations are political,” said Heidi Holmblad, who runs the California Association of School Psychologists, which endorsed a climate-change resolution after hearing from students involved with Guthrie’s group. “We’re always lobbying in Sacramento for bills that will help in mental health, especially school-based mental-health programs.” Her organization sent school psychologists to work with children traumatized by the wildfires, and she said that backing the resolution “was just a really easy thing for a California board to do.”

Jonah Gottlieb, a junior at Credo High School, in Rohnert Park, California, and youth co-director of Schools for Climate Action, said he has a difficult time understanding why any education group would refuse to speak up, especially since climate change is taught in his school. “Accepting the science they are teaching us should be a nonpartisan issue,” he said. 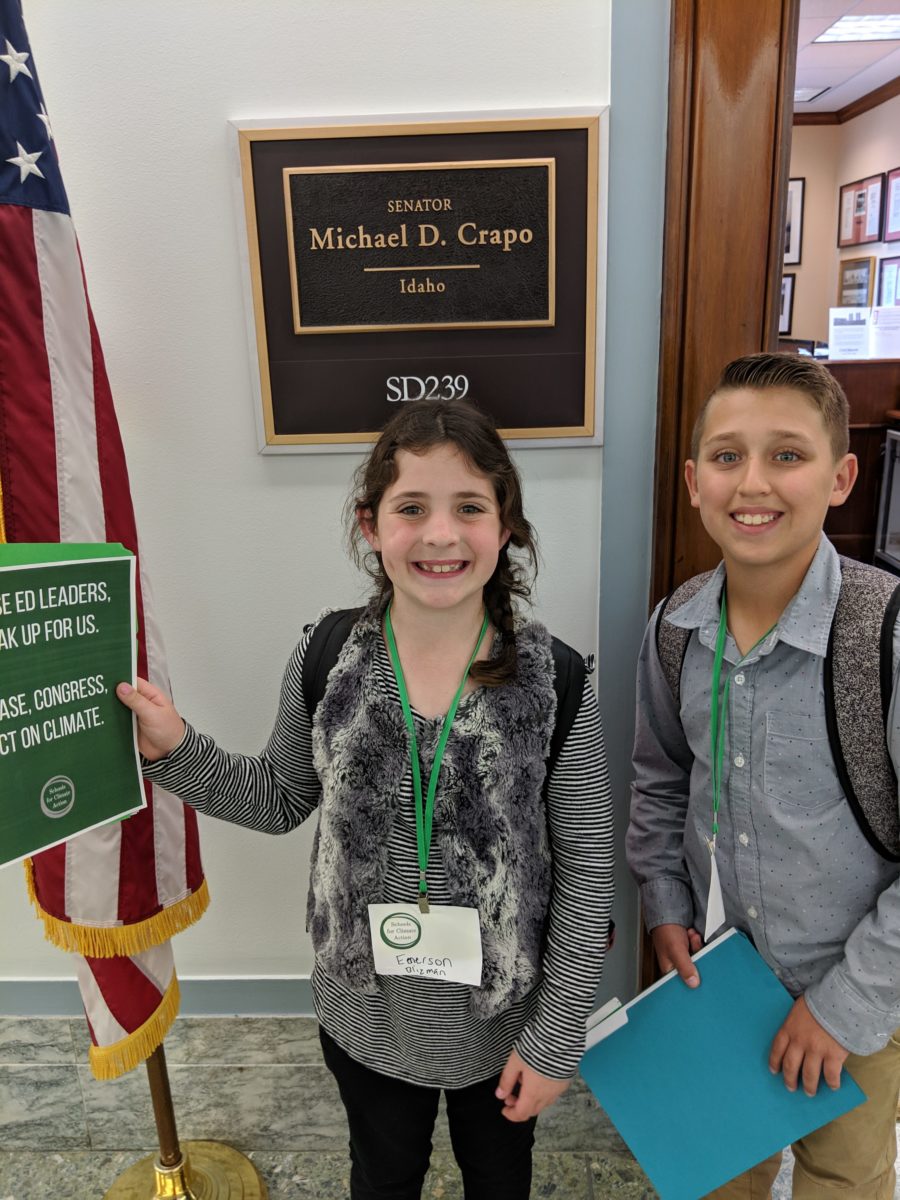 Students with Schools for Climate Action stop by the office of Senator Michael Crapo, a Republican from Idaho, to advocate for action on climate change. (Courtesy of Brandon Blizman)

In March, Gottlieb was one of roughly 150 students to attend an advocacy event in Washington, hosted by Schools for Climate Action, and to meet with lawmakers. He’s also working in California to encourage school boards in the state, and the California School Boards Association, to pass climate resolutions.

In a meeting of its leadership in late May, the California School Boards Association did not take up a resolution. Troy Flint, a spokesperson for the association, said its policy committee must first review the issue at a July meeting and will consider whether climate change is “in the specific policy domain of school boards.”

Guthrie said he’s been disappointed by the organization’s messaging to date. California Schools, the group’s quarterly journal, featured a spring 2018 cover story on the wildfires that did not include any references to “climate change” or “global warming” and had just one reference to a “warming climate.” “If you worked for the Heartland Institute you would have approved of the wording,” Guthrie said, referring to a policy think tank that has funded climate denial.

Flint said the group doesn’t have an editorial policy of discouraging discussion on climate change. The story, he said, emphasized natural-disaster recovery because its publication followed the fires and the organization wanted to “focus very narrowly on things that are specifically within board members’ control.”

Guthrie said this feeling of powerlessness on the part of education groups is part of the problem.

“They are incredibly busy, schools are resource-strapped institutions, nobody has excess bandwidth for anything,” he said, “and they focus on smaller details that they feel they have more power to control.”

But just as adults routinely tell kids that they have a voice on issues, Guthrie believes that education groups need to find their voice.

“We have incredible power to shape the context of the climate debate,” he said, “because it’s our kids who are clearly being harmed.”