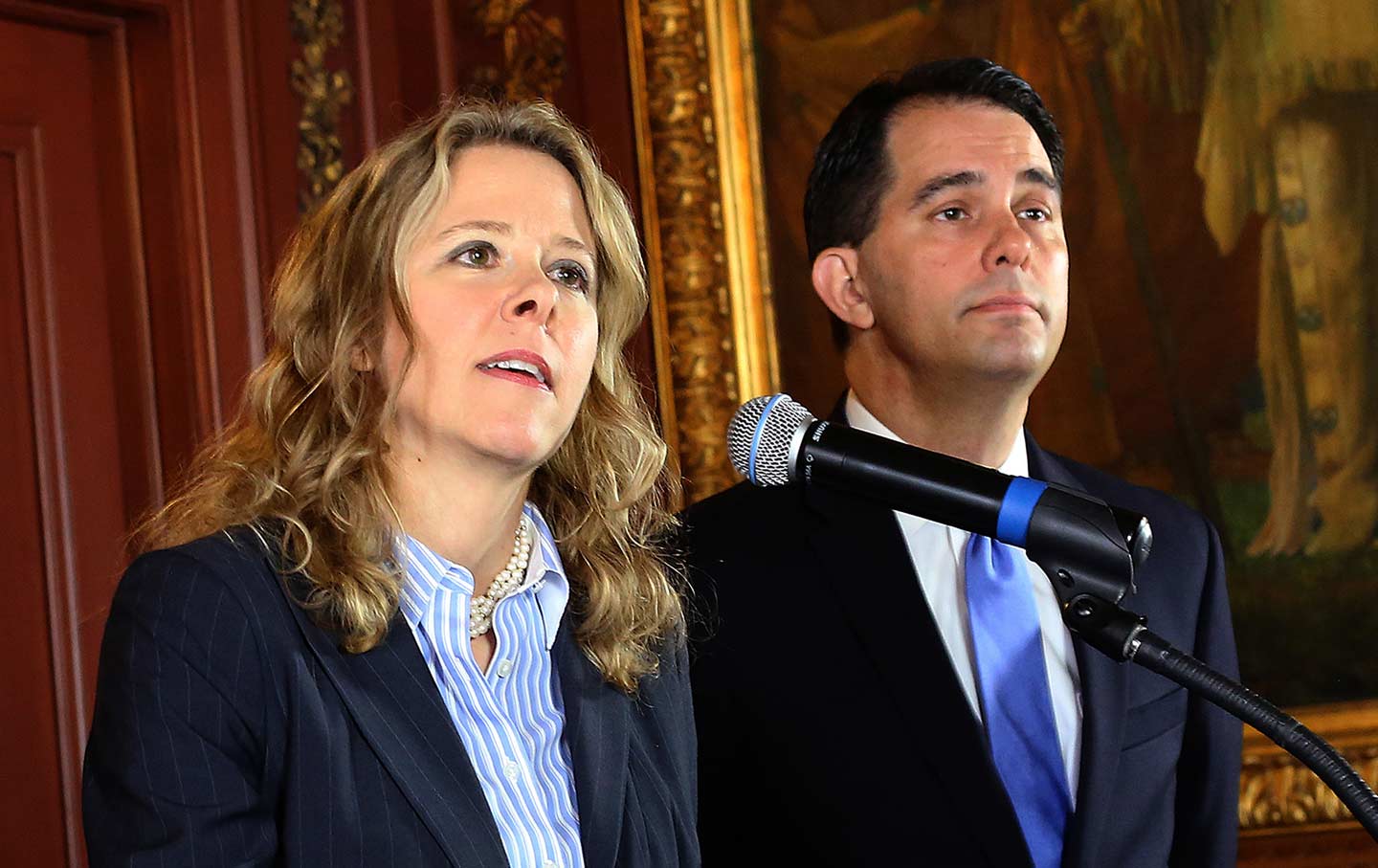 In the final hours before today’s Wisconsin presidential primary, Bernie Sanders and Hillary Clinton were were in total agreement.

They were both urging voters to cast ballots in the state’s hotly contested Supreme Court race.

And they were both making clear their positions regarding a contest that pits a conservative judicial activist with a history of taking extreme stances and close ties to Governor Scott Walker against a veteran prosecutor and jurist who argues that the courts must maintain their independence and assure justice for all.

Wisconsin Justice Rebecca Bradley once referred to gays and lesbians as “degenerates” and “queers.”

When Wisconsin Democrats gathered for their annual “Founder’s Day” dinner Saturday night, Clinton made a pitch for herself. But she took time to declare, “There is no place on any Supreme Court or any court in this country, no place at all for Rebecca Bradley’s decades-long track record of dangerous rhetoric against women, survivors of sexual assault and the LGBT community.”

“No to discrimination, no to hate speech and no to Bradley,” Clinton told the enthusiastic crowd.

The next night, at a rally in Madison, Bernie Sanders told thousands of cheering supporters, “I hope that a large voter turnout on Tuesday will help elect JoAnne Kloppenburg to the Supreme Court.”

How did the Wisconsin Supreme Court become a big deal in the race for the Democratic nomination for president?

It has a lot to do with Scott Walker.

“No to discrimination, no to hate speech and no to Bradley.” —Hillary Clinton

Walker’s first major act as a former presidential contender was to fill the vacant seat on the state’s highest court with Rebecca Bradley, a rigid ideologue whose illiberal opinions were well-documented.

As a college student in the early 1990s, Bradley wrote a series of articles in which she referred to gays and lesbians as “degenerates” and “queers,” compared abortion to the Holocaust, and argued that author Camille Paglia had “legitimately suggested that women play a role in date rape.” After Bill Clinton won the 1992 presidential election, Bradley wrote: “We have now elected a tree-hugging, baby-killing, pot-smoking, flag-burning, queer-living, bull-spouting ’60s radical socialist adulterer to the highest office in our nation.… We’ve just had an election which proves the majority of voters are either totally stupid or entirely evil.” More recently, in 2006, she wrote articles equating birth control with murder and advocated for a state law designed to allow pharmacists to refuse to fill prescriptions for birth control.

Walker attended Marquette University around the same time as Bradley, and they have for many years traveled in the same conservative circles in Milwaukee County.

The governor now says he was unaware of Bradley’s most extreme writings.

And he has had no qualms about championing her advancement to the highest bench in the state.

The governor appointed Bradley, a supporter of his partisan campaigns, to the Milwaukee County Circuit Court in December 2012.

The governor appointed Bradley to the Wisconsin Court of Appeals in May 2015.

The governor appointed Bradley to the Supreme Court vacancy created by the death of Justice Crooks in October 2015.

Sanders says that Governor Walker is trying to keep control of the Wisconsin Supreme Court with a justice “who should not be on the court.”

A Yale graduate who earned a master’s degree in public affairs from the Woodrow Wilson School at Princeton University and a doctor-of-law degree from the University of Wisconsin Law School, Kloppenburg interned with the longtime chief justice of Wisconsin’s Supreme Court Justice Shirley Abrahamson, and clerked with US District Court Judge Barbara Crabb. She served for two decades with Democratic and Republican attorneys general as a top lawyer with the Wisconsin Department of Justice. She began teaching at the University of Wisconsin Law School in 1990 and has served as a mentor with the Dane County Bar Association.

Judge Kloppenburg was elected without opposition to the Wisconsin Court of Appeals in 2012, and now serves as the presiding judge of that court.

This year, Judge Kloppenburg bids for the high court as a candidate who promises “to stand up, as a justice on our Supreme Court, to the partisan politics and unregulated special interests that have no place on the court.” And that commitment to judicial integrity and the rule of law has earned her broad support across the state from judges, district attorneys, and sheriffs, as well as major newspapers.

The Supreme Court race is a nonpartisan contest. And Judge Kloppenburg tends to avoid partisan associations. She did not, for instance, attend the Milwaukee dinner where Clinton ripped on her opponent or the Madison rally where Sanders discussed the race.

Not so Rebecca Bradley. Jenny Dye, the research director for the progressive group One Wisconsin Now, refers to the justice as “the candidate who owes her judicial career to the most divisively partisan governor in Wisconsin history and whose largest single contributor is the state Republican Party,” noting that “with nearly $70,000 in contributions, the Republican Party is the biggest single funder of Rebecca Bradley’s campaign for the state high court.”

Bradley is so indebted to special interests that she recently left a court session to give a speech to a group of lobbyists who are closely associated with the governor. And, as the presidential primary campaign reached Wisconsin, Bradley appeared at a conservative event that also featured the new darling of Walker and his political allies: Ted Cruz.

Like Cruz, Bradley does not take kindly to criticism. She said after a recent debate, “I’m somebody who has put myself out there to serve the people of Wisconsin, and I deserve a little more respect than I`m receiving right now.”

But One Wisconsin Now’s Dye says, “Rebecca Bradley is far and away the most partisan candidate the Wisconsin Supreme Court has seen. She has shown with her words, with her actions and with her campaign contributions she cannot be trusted to uphold the most basic principle of our judicial system, that all are equal before the law.”