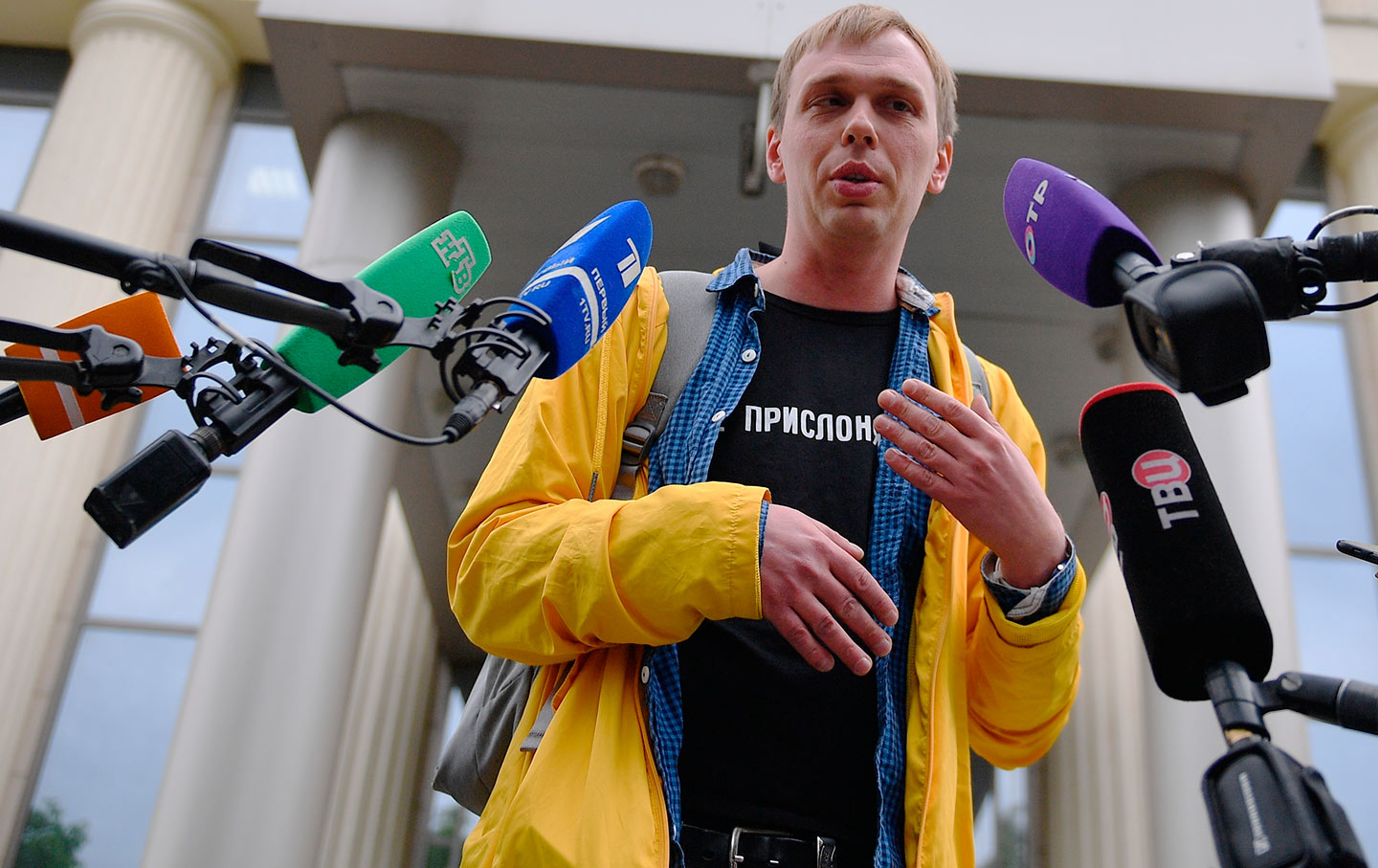 Russian investigative journalist Ivan Golunov, who has been accused of attempting to sell of drugs, speaks to the media next to the Moscow city court in Russia on June 14, 2019. (Vladimir Pesnya / Sputnik via AP)

Over the last few days in Russia, the name of Ivan Golunov, a journalist for Meduza, an online opposition site, became the symbol of free journalism and civic courage, a popular hashtag, and a banner uniting tens of thousands of people who came out onto the streets in cities from the Far East to the Baltics. The news of the Golunov case overshadowed the meeting of Putin and Xi Jinping and disrupted the course of the St. Petersburg Economic Forum. As a reminder of Yegor Yakovlev’s Obshchaya Gazeta (Common Newspaper), which united the defenders of democracy during the August 1991 putsch, Russia’s three largest business newspapers—RBK, Kommersant, and Vedomosti—came out with the same front page: “I/We Are Ivan Golunov,” and both critics of the regime and its major propagandists joined in solidarity with Golunov. (Copies of the combined edition are being sold on the Internet for 35,000 rubles ($550).

On June 6, Ivan Golunov was headed for a meeting with a source. He had published several investigative articles about loan sharking, the earnings of the deputy mayor of Moscow, the apparent censorship of journalists, and the Moscow “funeral mafia”—a network of state-connected individuals who control Russia’s funeral industry. He was arrested, searched, and sent to a holding cell at a precinct station, where he was beaten. The police claimed to have found narcotics in his backpack; for several hours he was not allowed to call a lawyer or given food. No one initially took samples from his hands and fingernails for analysis. This was not known until the next day, when Meduza and then independent media outlets Novaya Gazeta and Echo of Moscow announced that a journalist who had never used narcotics nor even drunk wine was being persecuted for his work. The Moscow police in turn published information on the arrest with photographs from Golunov’s apartment showing equipment for making drugs. This information was broadcast on the state TV channel Russia 24, adding that the journalist had been drunk. It was soon discovered that the photographs were fakes taken elsewhere, that his fingerprints were not on the packages of drugs, and that there were no traces of narcotics on his hands or fingernails.

On June 7 and 8 people came out onto the streets in front of the police station and court in Moscow and in many other Russian cities; thousands signed petitions calling for his release; and users of Facebook and other social media used the hashtag in his defense. At his trial, the journalist said he had been hurt by the police and the funeral mafia, which had been threatening him for a long time. Late in the evening of June 8, the court sent him home under house arrest, which was celebrated by his supporters as a victory (since they had expected a sentence of up to 20 years).

Over the following days, Golunov was celebrated as a national hero: Propagandists and stars of stage and screen, not previously known to be supportive of a free press, spoke out in his favor; Valentina Matviyenko, speaker of the Federation Council, criticized the police for a lack of professionalism; the General Procurator’s Office started an investigation; the head of the Moscow police asked President Putin to punish the guilty. On June 11, the case was closed for lack of evidence and Ivan Golunov was freed. Putin fired two police generals. The joy of unexpected justice filled the air and the Internet, and the statements by Maria Zakharova (director of information and press at the Ministry of Foreign Affairs), Margarita Simonyan (editor-in-chief of RT news network), and many other officials were conveyed with a sense of sincerity.

That brief moment of unity was destroyed on June 12, Russia Day, when more than 500 people were arrested at an unsanctioned rally. (The activists had changed their slogans from calling for Golunov’s freedom to punishing those who ordered the falsified arrest.) The next demonstration, “The Law for Everyone”—this one was sanctioned—was set for June 16, and another one will be held on June 23 to protest police arbitrariness.

The Golunov case, which shook the country and made the authorities take unprecedented measures to “correct mistakes,” marked a new stage of Russian society’s awareness and self-perception. Planting drugs is not new—in Soviet times it was used against dissidents, in post-Soviet times against criminal clans: When there wasn’t enough evidence to arrest the head of a gang, several grams of heroin were found on him. The practice is still in use today, sometimes to boost arrest rates, leaving many “drug dealers” unable to clear their names. Many of the people who came out in support of Golunov had not read his investigative articles—they were there because they knew it could happen to anyone.

That is why the liberation of the journalist—as if it were a gift for the national holiday—did not satisfy many people. They demanded justice for everyone, not just for those who ordered the false arrest. There were pickets in defense of journalists Igor Rudnikov, who was arrested after his newspaper revealed that a Russian official owned a luxury country house he had never declared—he was also unexpectedly released recently—and Abdulmumin Gadzhiev, who was detained late last week on terrorism charges. One of the protesters’ main demands is a change in Article 228 for distributing drugs. Other demands include call for increased supervision over police activity and real dialogue between the regime and society. This dialogue, says Eva Merkacheva, a member of the Council on Human Rights who participated in the negotiations to free Golunov, is imperative.

“The Golunov case, like the case in Yekaterinburg,” said Yulia Latynina, an observer at Echo of Moscow, “shows the collapse of the old system, when any law-enforcement person with power could do whatever he wanted and the Kremlin covered up for him. Now the siloviki”—politicians with KGB or military backgrounds—”are in a weak position.” The writer Dmitry Gluhovsky disagrees with her: “We were united not by righteous anger but by fear.” He believes that the system, like the Hydra, will manage to protect its license to do whatever it wants, and the public will tire of heroism. Andrei Kolesnikov, a Carnegie Endowment analyst, says that there will only be a controlled protest, and that authorities will create organizations they control and deal exclusively with them. The point, he feels, is not that the Kremlin is listening to the demands of the people, but that the siloviki, who were caught red-handed, have cast a shadow on the Spasskaya Tower of the Kremlin. Boris Vishnevsky, a Yabloko party deputy in the St. Petersburg legislature, also believes that the “Kremlin towers” will use the situation in their own interest.

Be that as it may, Russia has changed with the Golunov case. Everyone understands that. And many see that this is only the beginning.