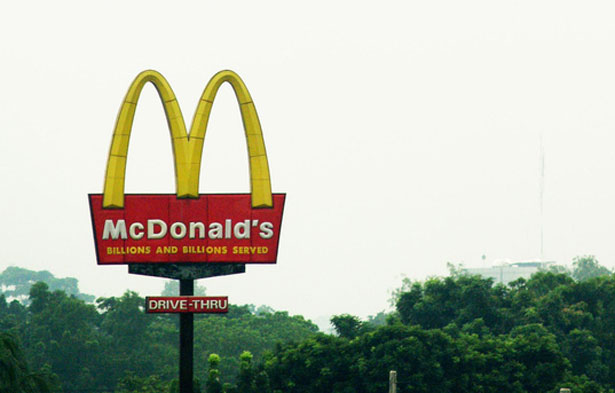 Around the world, the ubiquitous Golden Arches are often paired with the barely fathomable proclamation: “Billions and Billions Served.” But that boast may now be a bit of a liability, thanks to this week’s ruling by the National Labor Relations Board General Counsel.

General Counsel Richard Griffin Jr., prosecutor for unfair labor practice claims at the NLRB, ruled on Tuesday that McDonald’s is a joint employer of its vast workforce, sharing liability alongside its thousands of franchisees nationwide. This is very unwelcome news for the fast-food giant, because even though the corporation proudly takes credit as the purveyor of an astronomical volume of Big Macs, it has always sloughed off responsibility as an employer of an equally enormous number of impoverished and exploited workers.

The ruling authorizes dozens of complaints under the National Labor Relations Act that have been brought by McDonald’s workers. If the joint-employer designation is upheld, it would enable workers to hold the company to account for violating workers’ right to take collective action, and parallel allegations against McDonald’s as an employer in other pending lawsuits. This could ultimately advance the workers’ efforts to forge a union contract across many McDonald’s branches.

There have been 181 cases involving McDonald’s since November 2012—the time that a small group of fast-food workers staged a demonstration in New York and kicked off what would become a global campaign for workplace justice. The General Counsel stated that while some cases had been thrown out and another sixty-four were still being investigated, there were “forty-three cases where complaint has been authorized,” and depending on how those cases play out in hearings, “McDonald’s franchisees and/or McDonald’s, USA, LLC will be named as a respondent if parties are unable to reach settlement.”

If the NLRB ultimately rules in these cases that McDonald’s did crack down on or otherwise retaliated against or intimidated the workers as they demonstrated and staged sporadic wildcat strikes, the company could face penalties for labor violations. More importantly, no longer would McDonald’s be able to cast blame on individual franchisees for poor working conditions. Liability would go straight to the top, which has always been the target of the chief union supporting the campaign, SEIU.

There could also be a domino effect for similar cases involving multiple employers or contractors operating underneath large firms seeking to cut labor costs. As we’ve reported before, temp labor and other contingent workers face myriad obstacles in holding a parent company legally liable for labor abuse.

The new ruling may encourage workers to place the responsibility for various aspects of their bad jobs (which typically start at $9 an hour) squarely at McDonald’s doorstep, and perhaps even find common ground with franchise operators, who essentially are not mom-and-pop entrepreneurs, but more like sub-managers for a brand.

McDonald’s has vowed to fight the ruling. McDonald’s Senior Vice President Heather Smedstad told The New York Times that the company was ultimately not responsible for wages and working conditions, and that “this decision changes the rules for thousands of small businesses, and goes against decades of established law.”

But progressive labor experts say the designation of McDonald’s as a joint employer is not a mistake but a corrective for decades of corporate impunity, in which the company cheated workers and left franchisees holding the bag.

Catherine Ruckelshaus, general counsel of the National Employment Law Project, told reporters on Tuesday that the ruling recognizes the extraordinary power that a company like McDonald’s exerts as a supra-manager of its many semi-autonomous outlets and the frontline workers in the kitchen and counter workers. “[C]orporations that exercise sufficient control over their franchise operations cannot feign ignorance or disclaim responsibility for the illegal acts that happen in their stores,” she added. “Especially when these acts flow from the business model that McDonald’s… imposes.”

And if the huge McDonald’s workforce gets to negotiate the terms of its labor with a fast food behemoth, and one of the country’s largest unions is intervening as well, they might strike a deal of unprecedented proportions. Catherine Fisk, a law professor at University of California, Irvine, tells The Nation via e-mail that with franchisees and McDonald’s no longer able to mutually deflect (and thus both avoid) blame:

Having McDonald’s Corporation at the bargaining table will probably help the workers in some respects: The franchisee won’t be able to say, “Gee I’d love to pay you $15 an hour and eliminate the irregular and very short part-time work schedules that you hate, but I can’t because if I raise wages or change my staffing I won’t make enough profit to be able to meet my financial obligations under my franchise agreement with McDonald’s Corp.”

McDonald’s, in turn, might face more direct pressure to raise pay scales, expand benefits, or loosen financial pressures on franchise operators on the retail end. In theory, with enough public pressure, the firm might even be pushed, or shamed, into shaving a bit off its profit margin to increase frontline wages.

It is not clear yet whether the politics between McDonald’s and its franchisees on the one hand, and SEIU and the workers on the other, will yield a full-fledged union. But fast food campaigners see the ruling as a validation. Kendall Fells, organizing director with the advocacy group Fast Food Forward, told reporters, “This campaign is ultimately about McDonald’s coming to the table and negotiating with these workers—$15 an hour and a union contract. And at some point, McDonald’s has to make a decision on if it makes sense to keep fighting these workers, or does it make more sense to come to the table.”

Yet workers may now face an unprecedented political challenge in their organizing, if workplace disputes will automatically implicate McDonald’s as a whole. Workers won’t just be sitting across the table from the local manager, but from one of the biggest players in the global food industry.

For now, fast-food workers are gearing up for the long game. At the NLRB, they are only seeking to defend their basic right to speak out against their boss without fear. And now at least, they will be able to name exactly who the boss is.