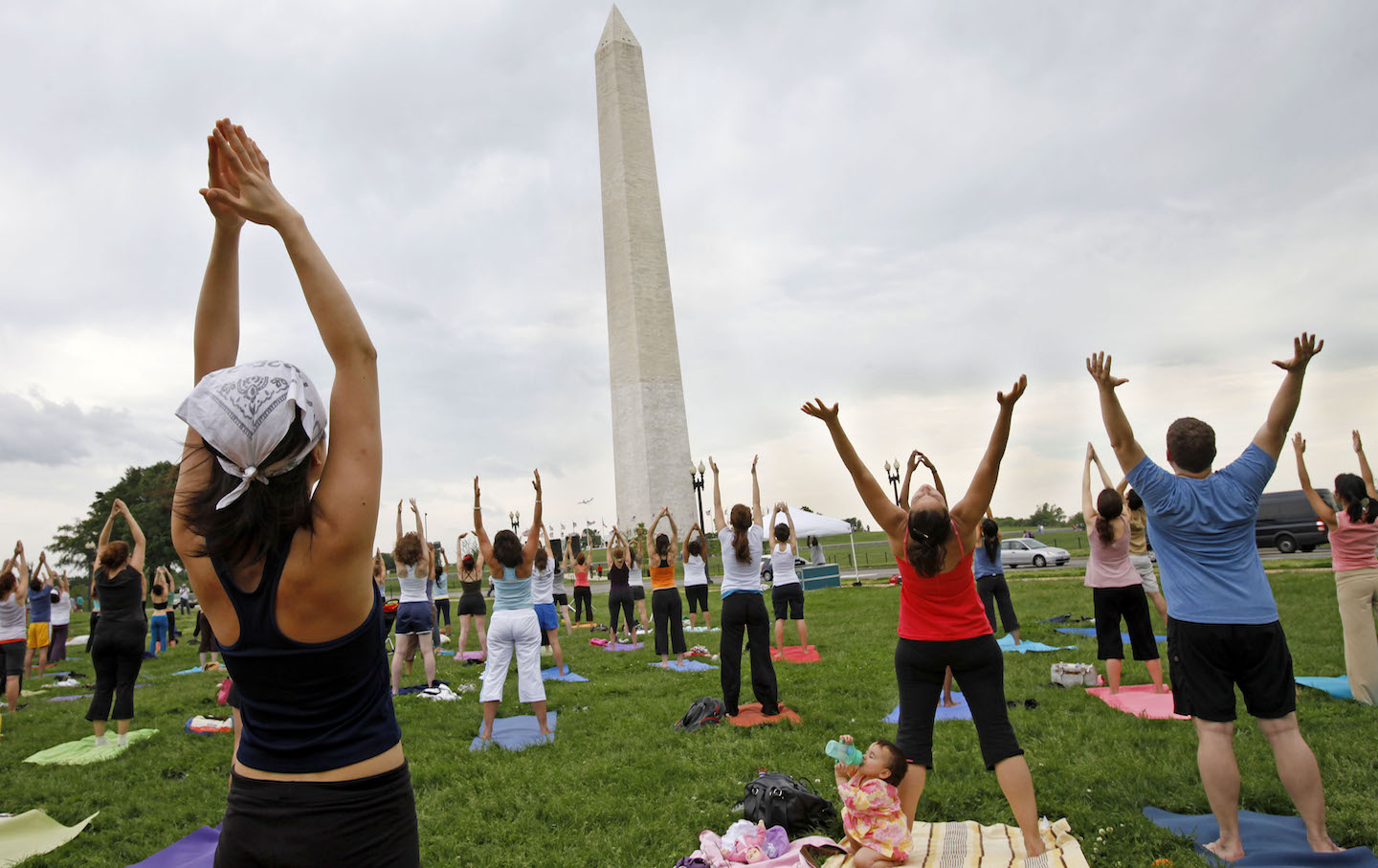 People practice yoga on the National Mall near the Washington Monument in 2009. (Photo by Jacquelyn Martin / AP)

Whatever ails you—be it anger, depression, or wanting a career change—there is a book on how mindfulness and meditation can help you attain your goals while bringing about a sense of contentedness. Rooted in a centuries-old Buddhist meditation practice, mindfulness, like the religion it originates from, is based on the Four Noble Truths, the first of which loosely translates to “Life is suffering.” What causes suffering? Things like desiring and craving the unattainable and humans’ greed and drive for dominance. And yet the poster children of greed and dominance, corporations with ethically dubious track records, from Goldman Sachs to Google and Monsanto, have implemented mindfulness-meditation training programs across all their levels. In 2018, Google’s mindfulness guru, Chade-Meng Tan, quietly stepped down from his role at the company after an investigation uncovered past inappropriate behavior.

Stripped of all ethical and religious tenets, mindfulness meditation has morphed into a market-friendly practice, adaptable into any context. Even the US military deploys mindfulness among its commanders and troops, teaching them how to focus on their breath as they pull the trigger. 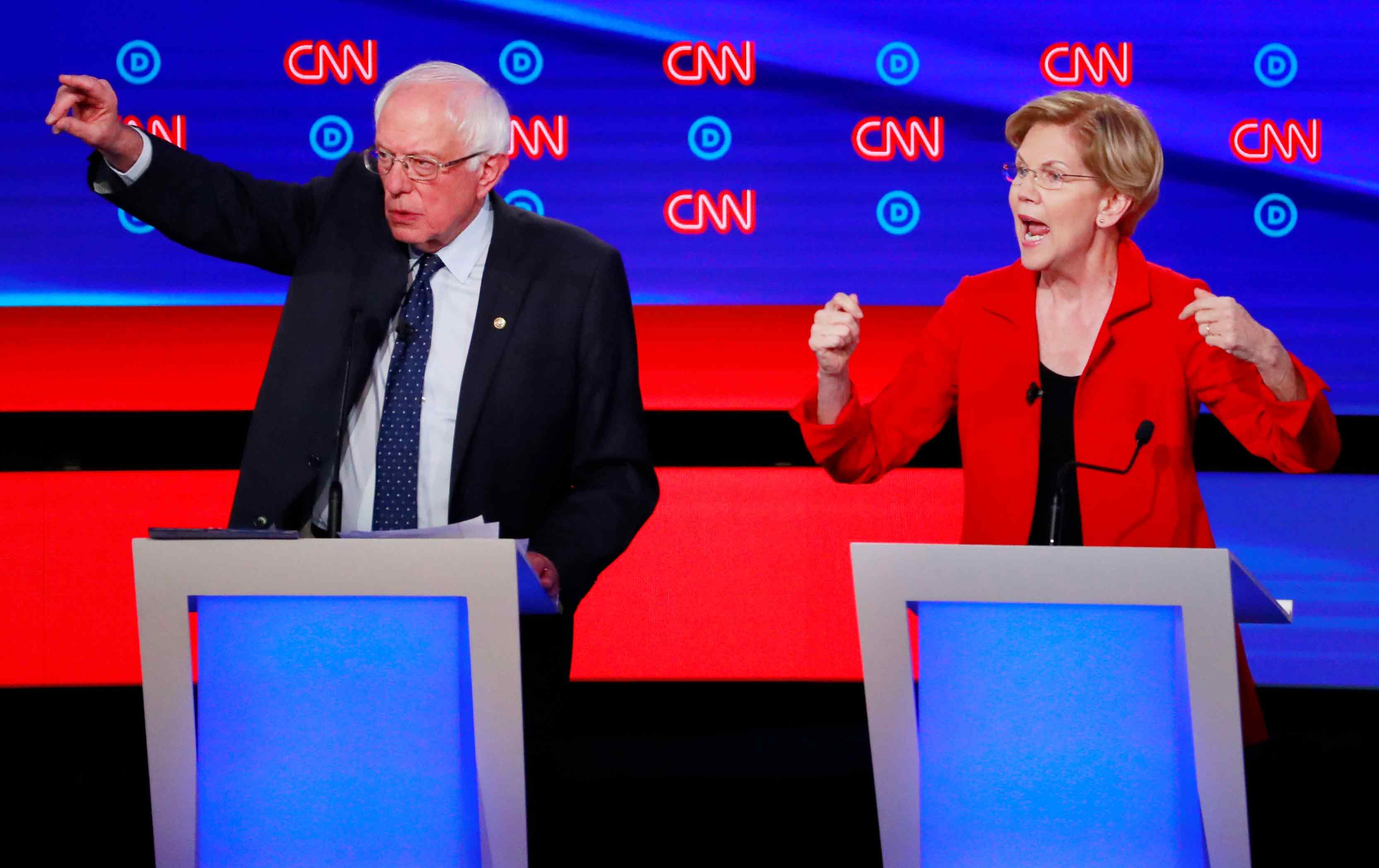 The Centrists Did Not Hold

Today’s corporatized mindfulness is largely a do-it-yourself practice (with countless books, meditation apps, podcasts, gurus, and seminars) filling the vacuum of a lonely culture obsessed with self-optimization, mind hacks, and shortcuts to self-care. Modern mindfulness is often sold as evidence-based, sanitized of any cultural baggage—neuroscience with a dash of what Jon Kabat-Zinn, known as the father of the modern-day mindfulness movement, calls “the essence of Buddhism.” It’s at once secular and clinical yet sacred.

Cementing mindfulness in the pantheon of evidence-based treatments was never the goal of his vision board. “The whole idea was to transform and heal the world,” he said in a 2017 interview. “I know that sounds arrogant, but that was, in fact, the sense of it.” Kabat-Zinn—with glasses, gray hair, and a biomedical degree from MIT—is quick to note that he did not invent mindfulness in 1979 when he started the eight-week course called Mindfulness-Based Stress Reduction, though he is largely credited for the ubiquity of mindfulness today, in particular among powerful corporations and the Davos crowd.

Kabat-Zinn is one of the main characters in Ronald Purser’s new book, McMindfulness: How Mindfulness Became the New Capitalist Spirituality. Purser, a professor at San Francisco State University who studies corporate culture, asks what if, instead of changing the world, mindfulness teaches people to be content with injustice and inequalities that pervade society?

In the wrong hands, he argues, mindfulness can become an instrument for corporate compliance. Rather than organize to change the need for self-care and breathing exercises in the first place, he writes, corporate mindfulness, or McMindfulness, becomes a pacifier that teaches workers to be comfortable with insecurity. Emotions like stress and anger are purely subjective, arising not from precarious labor conditions but from within—all in your head.

I talked with Purser recently to discuss how mindfulness got folded into corporate culture and how self-help teaches us to cope with the conditions of inequality instead of fight to end it. The conversation has been edited for clarity.

Zachary Siegel: Your book is about much more than critiquing supposedly woke CEOs at Davos. What’s the issue with corporatized mindfulness, or McMindfulness, as you call it? Stress relief, breathing exercises—aren’t these good things?

Ron Purser: The onus is completely put on the individual to make the right lifestyle choices, which downplays the whole notion of the social and environmental context. What’s happening with corporate mindfulness is a complete denigration of critical thinking into the causes of stress, which are all privatized into the individual. There is also an implicit denigration of collective action and building solidarity. This trope is so common—“Change always starts from within. We first have to change ourselves, take self-responsibility, do self-care.” It’s really similar to the Protestant ethic in some ways. Rather than submitting to the will of God, instead there’s a moral imperative to take care of your own health and well-being. The fact that these corporate initiatives are also [do it yourself] undercuts social change. It’s sending individuals a message that they are the problem, they need to be calm, and they need to regulate.

ZS: There is a tension throughout your book between the internal and the external. What is the problem with framing mindfulness and self-help as solely a matter for individuals to do on their own?

RP: We’re always in a mode of trying to remake ourselves, refashion ourselves. We’re entrepreneurs of the self. Just look at the boom in meditation and mindfulness apps. The products are being hawked. Everything is about mustering our internal resources in an enterprise culture where subjectivity is monetized as mental capital and we’re human capital.

But we don’t look at how external resources in the social and political environment are really what helps us become more resilient. Do we have sick days at work? Do we have money in a savings account? Do we have neighbors who can help us out? Do we have health care? All of these things are much more conducive to building resilience than these gadgets and techniques being marketed.

ZS: Your book chronicles various spiritual movements rising and falling in America—the rise of New Age in the 1970s and Transcendental Meditation in the ’90s. Who is behind the mindfulness boom?

RP: In terms of other social movements, the mindfulness movement is an elite social movement, which started with white elite males like Dale Carnegie and the prosperity-gospel guys. It’s quite unlike more grassroots activist movements like the civil rights movement, where you could see a more communitarian strand of mindfulness, run by people of color. There was coming together, talking about our oppression, sharing our vulnerabilities and working together to resist. That was very spiritually and religiously motivated and required a tremendous amount of mindfulness, but in collectives. Nonviolence takes a lot of mindfulness to pull off, but you can’t do it alone. It’s a stark contrast to what we see with these very rich, wealthy white men who are the promoters, who I call mindfulness merchants, and they’re spouting that mindfulness is good for everybody, it’s universal. These differentials in power trouble me, and I think we need to interrogate these differentials.

ZS: So who really benefits? If the goal of corporatized mindfulness is to get employees to be more productive rather than simply practice awareness of the present moment as an end in itself, then mindfulness is good for the people up top.

RP: I really take aim at the corporate mindfulness merchants. I’ve been to a number of their conferences and workshops. I participated in the first Search Inside Yourself Leadership Institute [course], which is Google’s mindfulness program. So I’ve tried to see what was actually going on, and I was already quite skeptical, but boy, after coming back from those conferences, I was like, “Well, you’ve got to be kidding me.”

ZS: What was going on in Google’s mindfulness program?

RP: The Search Inside Yourself seminar promised the program “increases productivity, enhances leadership effectiveness and supports happiness.” What more could an employer want? The workshop was an amalgam of childish icebreakers, turn-to-your partner exercises, three-minute breathing meditations, and a hodgepodge of superficial materials on emotional intelligence as a pathway to career success, along with the usual neurobabble that meditation changes your brain.

ZS: Executives at Monsanto and Goldman Sachs and commanders in the US military are all learning about mindfulness. But you throw a wrench in the notion that ethical behavior naturally flows from mindfulness.

Look at Google, the poster child of mindfulness. Look at the litany of privacy violations and everything they’re doing in surveillance. Goldman Sachs got on the bandwagon more recently to this, as did the military. Bill George used to be the president of Medtronic [a medical device company that settled lawsuits over misleading patients and doctors about adverse effects of its products], and he came out of Harvard Business School and is a Davos regular. He made a statement at Davos a while back saying the main business case for mindfulness is that if you’re more focused on the job, you’ll become a better leader and that can help executives and staff behave less aggressively.

Almost at the same time he said that, a 21-year-old at Merrill Lynch died of an epileptic seizure after working 72-hour workweeks. Goldman Sachs heard about this and announced new rules that they would cap workdays for interns at 17 hours. So, are we witnessing mindful leadership with that decision?

Mindfulness will offer some form of stress relief to a small group of employees. It’s individualistic, it’s therapeutic. But the whole systemic and structural apparatus of the company is completely untouched and not called into question. Think of the Silicon Valley companies. They’re exporting mass distraction. It’s such an irony. The externalities of these companies are designed for distraction, and yet at the same time, these small groups of employees are becoming less distracted so they could focus better on their work, so they could produce these technologies of mass distraction.

ZS: In breaking down the science behind mindfulness, you write, “The widespread belief that there is compelling clinical proof that ‘mindfulness works’ is simply not supported by the scientific evidence.” Is “evidence based” built on a house of cards?

RP: One of the problems is a big gap between the rhetoric on the so-called science of mindfulness and the actual science. If you read the journal articles, there are a lot of qualifications and hedging. But when it is translated into the public domain—like in Harvard Business Review, which claimed, “Mindfulness Can Literally Change Your Brain”—that’s where you see sweeping claims exaggerating the efficacy.

I’m not an expert in analyzing scientific studies. But I was trying to point out the gap between the hype and the science. There have been some meta-analytic studies going on that are showing the efficacy is quite weak and that there are methodological issues. The studies don’t have active control groups, and the sample sizes are small. Another key issue is experimenter allegiance and confirmation bias. You’ll find that some of the scientists who are lead authors on these studies are also strong advocates for mindfulness. They are mindfulness practitioners themselves, and so when a meta-analytic study controls for who the experimenter is, the efficacy goes down even more.

ZS: You point out that meditation and mindfulness aren’t helpful for everyone. What’s the harm in slowing down, pausing and breathing?

RP: I’ve often wondered, and this is speculative, but some of these scientists in the contemplative science community—are they using science as a way of evangelizing mindfulness? They truly believe it is good for everyone, and that’s not the case.

Mindfulness is a very unregulated industry. Unlike psychotherapy, where you need a license and have board reviews, it’s not like that in the mindfulness world, where anyone can hang out a shingle. I know for a fact that some corporate mindfulness trainers just take an online course and in eight or 10 weeks they reinvent themselves. They were probably corporate trainers in some other area, and now they’re experts in mindfulness training.