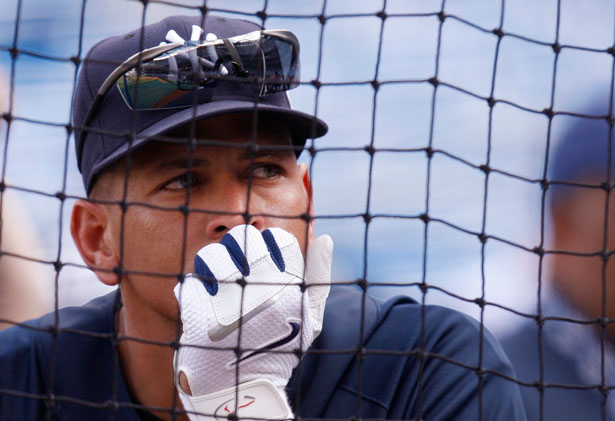 Alex Rodriguez and Ray Rice: a middle-aged, steroid-addled baseball star from Miami and a young Pro-Bowl running back caught on camera striking his then-fiancée Janay Palmer, have a couple of things in common these days. Owners and masses of fans want to each of these men to just go away, disappear, never heard from again. Each of their respective leagues would love nothing more than to be able to “pull a Stalin” and erase them from every photo, every video and every memory from their respective worlds. But neither is going anywhere, quietly or otherwise.

Alex Rodriguez, who is still owed $61 million over the next three years from the New York Yankees, is now the most publicly exposed liar since that guy who liked to play fighter-pilot dress-up told us there were weapons of mass destruction in Iraq. After over a full year of A-Rod saying both publicly and privately that he absolutely in no way, shape or form took performance-enhancing drugs, The Miami Herald revealed that in exchange for immunity he told all to the Feds last January. He testified to every syringe, every supplement and every bathroom injection that took place between 2010–12.

Even more nauseating—at least for me—is that Alex Rodriguez gave this testimony in exchange for immunity from prosecution. Part of this was aimed at his cousin, the alleged go-between who secured the PEDs from the now-shuttered Biogenesis of America clinic in South Florida. The cousin was allegedly blackmailing Rodriguez, yet it’s an odd form of justice—or maybe a disturbing metaphor for our entire justice system—to see a wealthy star drop a dime on his lackey family member for the crime of securing him his drugs. He may be immune from prison, but now Alex Rodriguez irrevocably owns more than just some MVP trophies and a series of dilapidated slums in Prince Georges County, Maryland. He has also shouldered a legacy as liar and turncoat.

Then there is Ray Rice. This week Rice is in front of Federal Judge Barbara Jones, where he is arguing that he should be able to play again in the NFL and that he has been victimized by the capricious, morally adrift personal-conduct policy of Commissioner Roger Goodell. Rice as well as the NFL Players Association is arguing that the league has in effect suspended him twice. First he received a two-game suspension for being arrested on the initial assault charges. Then when video footage actually emerged of the punch that removed Janay Rice from consciousness and the league found itself with an epic public relations crisis, Goodell changed his ruling from a two-game suspension to an indefinite one. Goodell’s argument is that the tape showed a different story than the one told to him by Ray and Janay Rice. That new information gave him the leeway, as judge, jury and executioner in the non–collectively bargained conduct policy, to change the suspension.

To believe Goodell, you would have to believe that Ray Rice lied to him about what happened and that the commissioner had never seen the videotape before it was posted at the gossip site TMZ. Ray Rice, not to mention numerous executives in the Ravens organization, have said that Rice was honest about what took place on that tape from day one, suggesting that Goodell is lying. Rice and his attorney will argue that the only thing Goodell did not see when he first saw and heard what took place on that elevator was the threat to his own power. A source in the NFLPA told ESPN, “We think the League knew everything about what happened inside, outside the elevator before they even spoke to Ray Rice. We think we can prove it. We’ll see.”

On Wednesday, Goodell, after fighting it legally for weeks, was compelled to testify for several hours in front of Judge Jones. There is a gag order, but we do know that the Judge, based upon her reputation, would have had little patience for the greasy evasions Goodell adopted in his instantly infamous press conference last September. He will have to say what he knew and when he knew it.

Ray Rice has become Exhibit A of not only domestic violence in the NFL but also the profound hypocrisy that lurks in the league’s corridors of power. And here we see the other thing that Rice and A-Rod have in common. Whatever you might think of these two as individuals, both of them are being held up as scapegoats for something that runs much deeper in both leagues. Baseball has incentivized the use of performance-enhancing drugs for decades. The greatest explosion of steroids took place under the watchful eye of the retiring commissioner Bud Selig, who now gets to walk away and retire from the sport with the honorific that he “cleaned up the game,” by suspending people like A-Rod. Painting Selig as an anti-PED warrior is really the “giving Kissinger the Nobel Peace Prize” of sports.

In football we are talking about a situation that is far more insidious. As I’ve written before, the United States has a domestic violence and violence-against-women problem. Singling out NFL players for specific scorn is more than counterproductive. It’s scapegoating. But what the NFL does have is a cover-up problem. Over the course of decades domestic violence is an issue that the NFL has brushed aside and it would still be brushing it aside in the case of Ray Rice if not for that videotape.

I am not against individual accountability for Alex Rodriguez and Ray Rice. I am strongly against the idea that the weight of Major League Baseball’s historic hypocrisy around PEDs should be ignored so we can feel better as we toss metaphorical flaming bags of dog poop at Alex Rodriguez. I am strongly against fastening a legacy of ignoring or even winking at violence against women on the individual shoulders of Ray Rice. Let each of them deal with what they have wrought. But if they are erased from the collective consciousness, we are ensuring that history will repeat itself. Instead, if they are going to be pariahs, let Roger Goodell and Bud Selig join them in the circle of shame. It is truly the least they deserve.