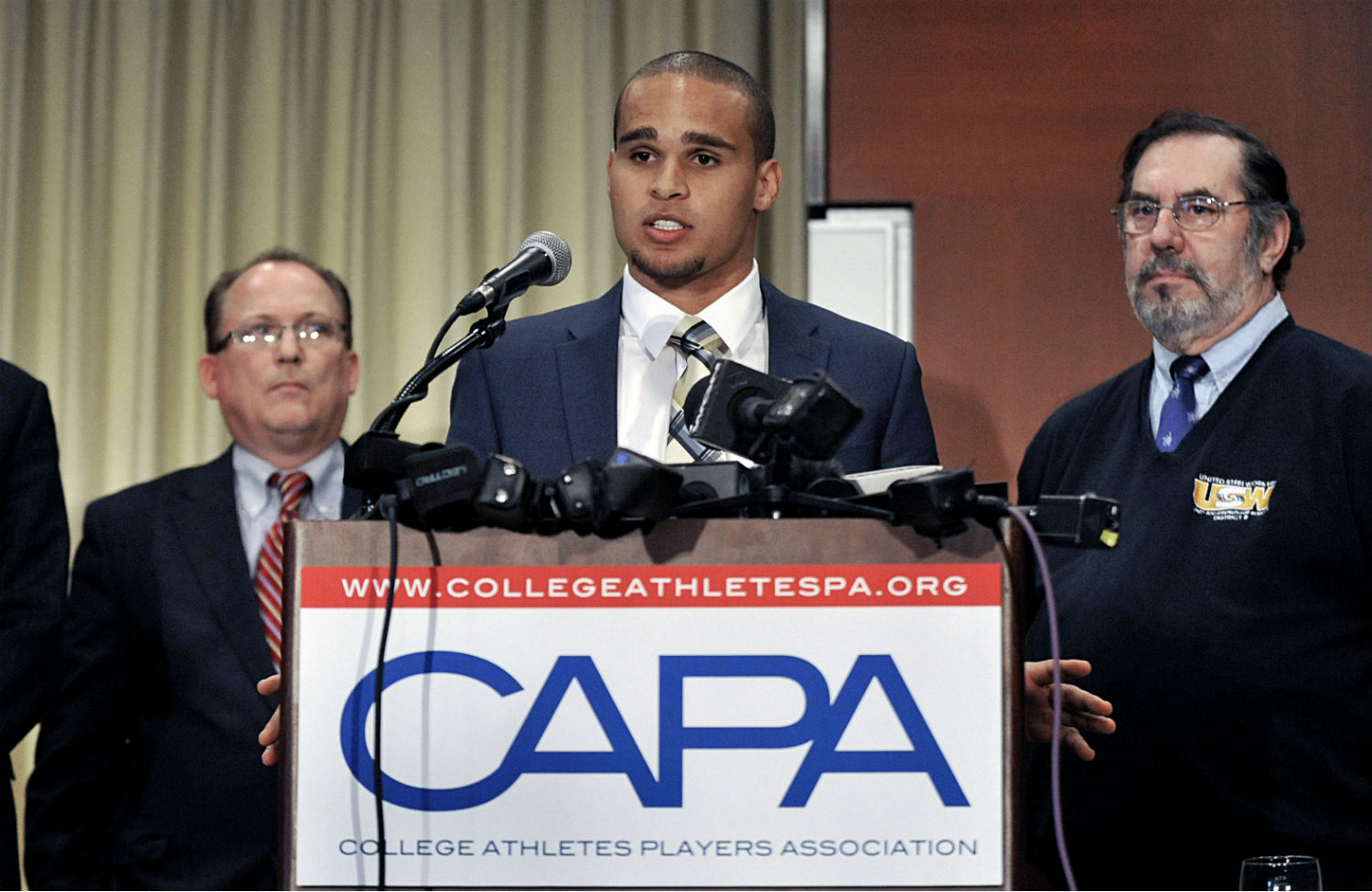 When you talk union in Chicago, you are telling the story of the Haymarket Martyrs, the nineteenth-century general strikes for the eight-hour day, and the rank-smelling stockyards captured in Upton Sinclair’s The Jungle. In recent years, this tradition has been reignited with the 2006 May Day protests that brought the city to a standstill, the worker occupation of Republic Windows and Doors and the 2012 Chicago Teacher’s Union strike that made Mayor Rahm Emmanuel bluster and blink. What you don’t think about is Northwestern University, where tuition is $63,000 a year (holy shit, is that number even right? Yes, it is), and you certainly don’t think about the football team. Well, think again.

In news that will resonate far and beyond Evanston, Illinois, the Northwestern Wildcats football squad announced this week that they would be the ones: the first team in the history of college athletics to try to form a union. The team members, in a near-united fashion, filled out their union cards and filed their paperwork with the National Labor Relations Board in the hopes that they can fight back against the NCAA, the cartel that runs college sports. Ramogi Huma of the National College Players Association as well as organizers from the United Steelworkers Union aided their efforts, but this was all about the Wildcats.

At Northwestern, this move has been led by team quarterback Kain Colter, who was one of the players who wore the initials #APU, or All Players United, on his uniform last fall. “The action we’re taking isn’t because of any mistreatment by Northwestern,” Colter said to ESPN’s Outside the Lines. “We love Northwestern. The school is just playing by the rules of their governing body, the NCAA. We’re interested in trying to help all players—at USC, Stanford, Oklahoma State, everywhere. It’s about protecting them and future generations to come…. Right now the NCAA is like a dictatorship. No one represents us in negotiations. The only way things are going to change is if players have a union.”

An even stronger comment was issued by a Northwestern player anonymously to the website Reddit. He wrote, “This isn’t about getting paid. What it is about is protection. Many of us will have numerous injuries throughout our playing careers. A group of those players will continue to feel the effects of those injuries long after their playing days are over. The goal is to have some sort of medical protection if we need surgeries stemming from injuries sustained while playing for our university.… Would it be nice to have some part of jersey sales or memorabilia sales? Absolutely. But that is not the goal as of right now.”

Not surprisingly, the NCAA’s chief lawyer, Donald Remy, who, I can guarantee, does not work for free, unlike the players he is attempting to smash, issued a statement that was about as contemptuous as you could expect. Remy said, “This union-backed attempt to turn student-athletes into employees undermines the purpose of college: an education. Student-athletes are not employees, and their participation in college sports is voluntary. We stand for all student-athletes, not just those the unions want to professionalize. Many student athletes are provided scholarships and many other benefits for their participation. There is no employment relationship between the NCAA, its affiliated institutions or student-athletes.”

Let’s forget the condescending “union-backed attempt” line as if the football team at Northwestern is just a hand puppet for that all-powerful ascendant force otherwise known as the United Steel Workers. Focus on Donald Remy using the phrase “student-athlete” five times in five sentences. For those who did not read Taylor Branch’s masterful takedown of this rhetorical swill, “student-athlete” is a legal phrase created by the NCAA in the 1950s to avoid paying workers' compensation benefits to the widow of a football player named Ray Dennison who died on the field.

But lawyers are not the only gatekeepers of this sinister status quo. Many of the forces that slurp at the college cartel gravy train are also up in arms over the temerity of Northwestern’s players. The winner of “most obnoxious comment” has to go to Doug Gottlieb, the CBS Sports college hoops analyst who tweeted, “The greatest gift you can receive in the world is a free college experience/education—the need for a greater gift is sickening.” (That was Doug’s bolding of the word “gift”, master of subtlety that he is). It is hard to know which part of that tweet to correct first, but suffice it to say, exploitation is not a gift. Seeing your coaches make millions off of your sweat while you are an unpaid billboard for Nike is not a gift. Missing classes because you have to fly to the Great Alaska Shootout is not a gift. Driving thirty straight hours while fighting staph infections is not a gift. Hell, seeing Doug Gottlieb make a ton of money that should by all rights be in your pocket is not a gift. The only thing “sickening” is the rank contempt Mr. Gottlieb has for a group of young people daring to stand up and be heard.

Whether or not the Northwestern players succeed in their efforts to unionize—and the NCAA will spend however many billions it takes to make sure this does not happen—their efforts today will long be remembered as the opening shot that cracked the NCAA Cartel. They deserve our support. They deserve our respect. Most of all, they deserve our solidarity. In 1922, that author of The Jungle, Upton Sinclair wrote, “College athletics, under the spur of commercialism, has become a monstrous cancer.” I do not know what Sinclair would make of a twenty-first-century world where coaches make 100 times the salaries of professors. I think we can say safely, however, that the actions of the Northwestern football team would have made Mr. Sinclair very proud indeed.