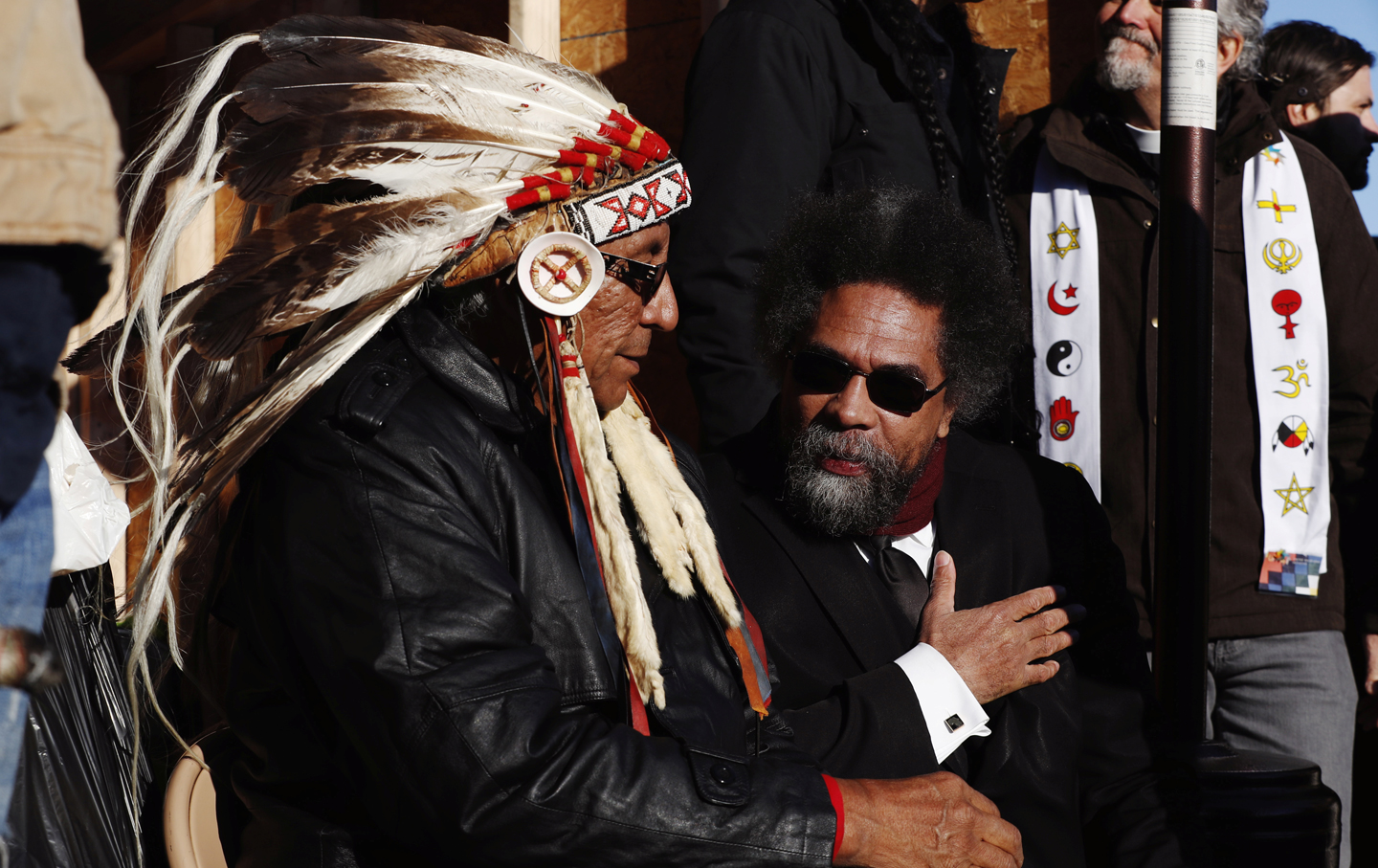 The routes of resistance often pass through unexpected locations, so perhaps we should not be suprised that the best news of the post-election moment comes from North Dakota.

On Sunday afternoon, as thousands of activists joined members of the Standing Rock Sioux Tribe Sunday, tensions were high along the proposed route of the Dakota Access pipeline. Federal, state, and local officials were talking about evacuating the encampment where Native Americans and environmental campaigners from around the world had gathered to oppose a pipeline project that threatened sacred lands and safe drinking water for the Standing Rock Sioux and millions of people living downriver from where the project’s developers proposed to tunnel the pipeline under the Missouri River.

Congresswoman Tulsi Gabbard, D-Hawaii, and veterans from across the United States were arriving to join the stand against the pipeline, promising to defend the Standing Rock Sioux. There was talk of forming a “human shield” to prevent more arrests and the forced removal of self-declared “water protectors.”

Then came the announcement from the US Army Corps of Engineers that it would not grant an easement for the critical crossing that contractors had planned to complete the four-state, $3.8 billion pipeline project. Assistant Secretary for Civil Works Jo-Ellen Darcy explained that her decision was based on the need to “explore alternate routes” for the pipeline, while US Secretary for the Interior Sally Jewell promised “an in-depth evaluation of alternative routes for the pipeline and a closer look at potential impacts” and “underscores that tribal rights reserved in treaties and federal law, as well as Nation-to-Nation consultation with tribal leaders, are essential components of the analysis to be undertaken in the environmental impact statement going forward.”

National environmental groups hailed what was described as an “admission that Native nations were not meaningfully consulted on a project with such high risks to their sovereign lands and drinking water.” “For too long, Native voices have been left out of decision-making processes that affect their communities, cultural resources and beliefs and the natural environment,” said Wilderness Society president Jamie Williams. “Under the Obama Administration’s leadership, the United States has begun the long process ahead to correct these historic wrongs.

“For too long, Native voices have been left out of decision-making processes that affect their communities, cultural resources and beliefs and the natural environment. Under the Obama Administration’s leadership, the United States has begun the long process ahead to correct these historic wrongs.”

It is likely that there will continue to be debate, and struggle, over this issue. The developer of the pipeline, Energy Transfer Partners, has been refusing to reroute it. And the congressman from North Dakota, Republican Kevin Cramer, greeted the Army Corps of Engineers announcement by ripping President Barack Obama as a “lawless” executive who was bending to “criminal behavior” by foes of the project. It would be foolish to underestimate the power of the energy industry, or the threats that may arise with a new administration in Washington.

But few doubted Sunday that an exercise of essential constitutional rights—the right to assemble and to petition for the redress of grievances—had begun to bent the arc of history toward justice.

Vermont Senator Bernie Sanders, an outspoken defender of Native America rights and an equally outspoken foe of the pipeline project, hailed President Obama for “listening to the Native American people and millions of others who believe this pipeline should not be built.”

“In the year 2016, we should not continue to trample on Native American sovereignty. We should not endanger the water supply of millions of people,” insisted Sanders, who made climate change a core issue of his campaign for the Democratic presidential nomination. “We should not become more dependent on fossil fuel and accelerate the planetary crisis of climate change. Our job now is to transform our energy system away from fossil fuels, not to produce more greenhouse gas emissions.”

But the most heartfelt response came from central North Dakota, where the people who stood first and longest against the pipeline project were moved to tears and joyous celebration.

“We wholeheartedly support the decision of the administration and commend with the utmost gratitude the courage it took on the part of President Obama, the Army Corps, the Department of Justice and the Department of the Interior to take steps to correct the course of history and to do the right thing.” said Standing Rock Sioux Tribal Chairman Dave Archambault II.

Vigilance and activism will still be required. But, on this particular Sunday, there was a powerful sense that a mighty act of resistance by the Standing Rock Sioux and their allies might indeed be correcting the course of history.