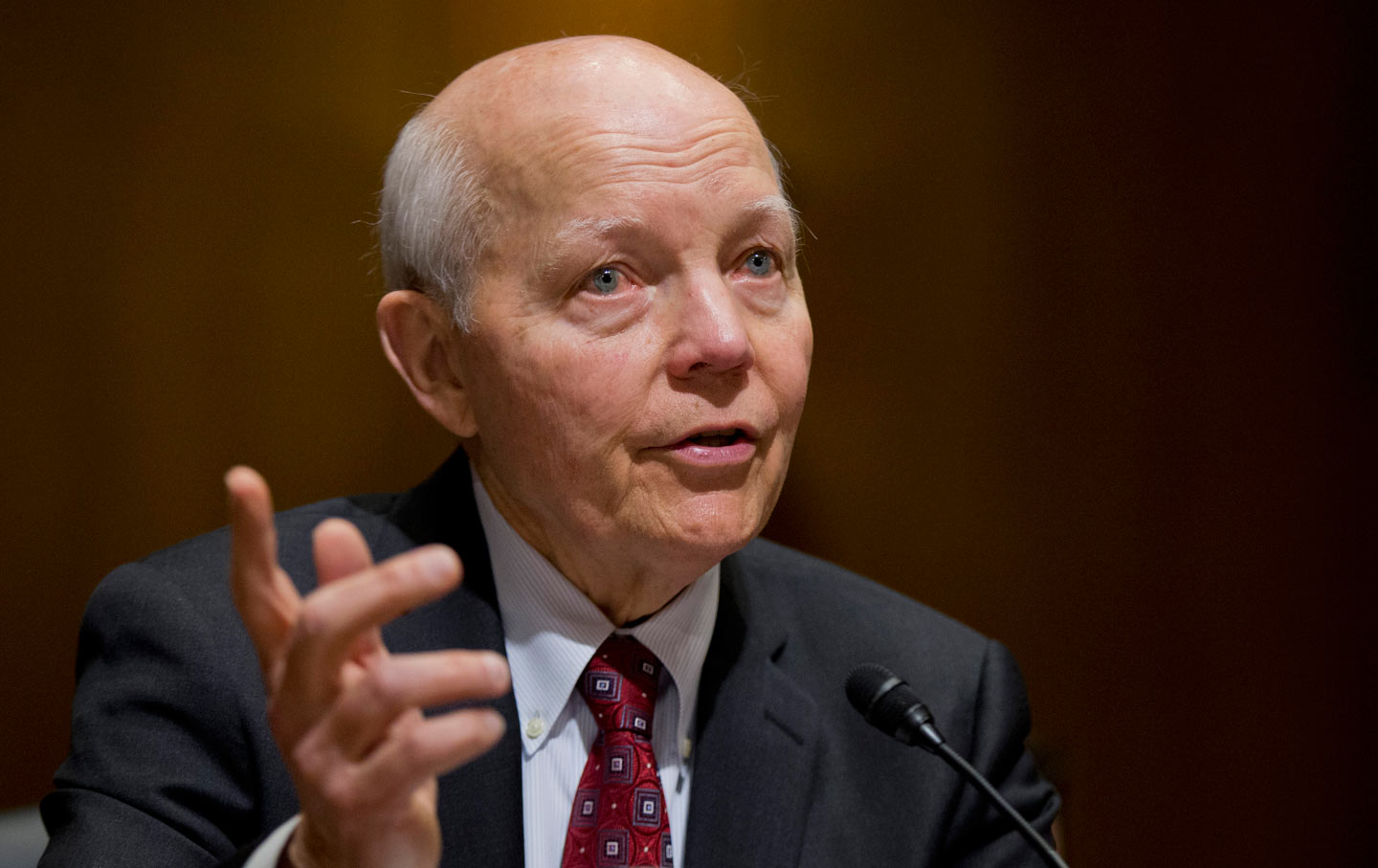 Very few people enjoy paying taxes, so it’s hardly surprising the Internal Revenue Service is unpopular. This makes it an easy political target, particularly for those who are already on a mission to slash and eliminate as many taxes as possible. Senator Ted Cruz, for example, proposed shuttering the IRS entirely during his recent presidential campaign and said he would post the 125,000 agents along the southern border.

For years, the agency has been in the crosshairs of the Republican Party, particularly the far-right members of the House who have now organized themselves as the Freedom Caucus. But last week the war on the IRS escalated significantly, beyond mere rhetoric and hectoring: the House Judiciary Committee is now seeking to impeach IRS Commissioner John Koskinen.

Ostensibly, the decapitation of the IRS can be traced to the scandal that broke three years ago, when it was disclosed that conservative groups were being held to a higher standard in their quest for tax-exempt status. The agency’s bungling of that issue and the subsequent dodginess of those responding to Republican fury—including Koskinen—only added to Republican resentment.

But impeaching a civil servant? Even if Koskinen were inept (his real crime may be his failure to genuflect before those who badgered him in hearings,) invoking impeachment is like using a nuke for pest control. The last civil servant who was impeached was William W. Belknap, the secretary of war, for taking a kickback. That was 1876.

If Koskinen survives the impeachment process, as expected, he still faces possible censure, but whatever the outcome, assaults on the agency are sure to multiply. That’s because the real complaint many Republicans have with the IRS is not that it is underperforming but, rather, that it is performing at all.

For Republicans, particularly members of the Freedom Caucus, targeting the IRS represents a crafty—some might say “cunning”—strategy: a pincer movement designed to emasculate government’s ability to raise revenues, even as it draws the line on deficit spending. In such a scheme, the IRS is the carotid, that vital artery that oxygenates all of government. The less it takes in, the more government atrophies.

And the political risks are minimal. In an election year, what’s not to like? Name one politician whose career was set back by attacking the IRS, a cultural whipping boy for as long as there has been a government. In the Bible, “publican” (or tax man) is a dirty word, and only Jesus could make an honest man of Matthew, the corrupt tax collector turned disciple.

For years, Republicans have whittled away at the IRS budget, deliberately undercutting its capabilities. Its budget has been cut by about $1 billion—about 17 percent—over its 2010 budget, factoring in inflation. The agency has been forced to shed some 13,000 people. The result: During the height of last year’s filing season, 90 percent of calls to the agency’s helpline went unanswered. That further incited discontent, fed the perception of a callous bureaucracy, and allowed those in oversight to cast themselves as champions of the aggrieved.

You can’t kick a dog and then yell at him for not being able to run. But that is the perversity of the policy now pursued by the Freedom Caucus.

The ranks of auditors have also been depleted, reducing the efficiency of collection, and emboldening those already inclined to cheat. In 2015, there were 1.2 million audits conducted—a drop of some 350,000 over the course of five years. That in turn meant government collected $30 billion less in revenue. For perspective, the Environmental Protection Agency, reviled by many on the right, has a budget of  $8 billion, the equally detested Consumer Financial Protection Bureau, a mere $600 million.

The impeachment effort, radical and nearly unprecedented as it is, masks a much broader attempt to reshape government itself. And as worrisome as it may be to pragmatists that the revenue-raising function of the nation is in jeopardy, so too is the entire oversight apparatus of Congress, or at least what remains of it.

The impeachment drama may share more in common with Kabuki than oversight. And impeachment represents a serious escalation in a conflict in which the IRS is only the proximate target: the debacle is certain to have an impact on the tenor and integrity of congressional investigative and oversight hearings—and on whatever tattered remnants of comity have survived the ravages of political polarization.

Government itself has long relied on such hearings and investigations for vital information, accountability, and reform. Historically, such hearings have exposed some of the nation’s most egregious abuses and produced some of the most important reforms, like those resulting from hearings on Teapot Dome, Watergate, and the CIA. (They have also, on occasion, veered wildly off course and shamed the nation: think Republican Senator Joseph R. McCarthy.)

Republicans are not the only culprits here. As a committee chair, then-Representative John Dingell was notorious for his bullying tactics and withering assaults. But at least the findings and the facts still enjoyed a measure of respect.

This can no longer be said. Even before hearings on Koskinen’s impeachment, meaningful oversight had been reduced to preaching to the choir, a display of histrionics, not designed to produce information, but calculated to discredit political adversaries. One might well ask why Representative Jason Chaffetz was so determined to have Koskinen’s head on a platter, why he suggested Obama might be impeached for the Benghazi affair, and yet long resisted calling Michigan’s Republican Governor Rick Snyder to testify on the Flint, Michigan, water scandal.

As chair of the House Oversight and Government Reform Committee, Chaffetz only followed in the footsteps of his predecessor, Representative Darrell Issa. The hallmarks of their hearings have been incivility, bombast, and innuendo. In addition, no committee has provided a purer example of such partisan excess as the House Select Committee on Benghazi, whose interminable quest to mortally wound candidate Hillary Clinton has itself profoundly devalued oversight and congressional credibility.

There is the very real danger this impeachment effort will not be the last, that it is the opening gambit by those who would normalize impeachment as a way to punish or exile political opponents or use the congressional equivalent of capital punishment as a warning to others to take heed and not resist their demands for obeisance. And no one should imagine the Democrats are above taking a page from the Republican playbook. Adding impeachment to the arsenal of partisan options only further institutionalizes the tit-for-tat-ism that already cripples Congress.

Some five years ago, former Oklahoma representative Micky Edwards, onetime chair of the House Republican Policy Committee, offered this advice for those tasked with oversight: “…take off your party hat. Put it in a drawer, and deal with this as somebody who has taken an oath of office…to carry out the mandates of the Constitution to function as the people’s voice.” That’s “people’s,” not “party’s.”

Which brings us to the nettlesome question asked by the Roman poet Juvenal: “Who shall guard the guards?” Who is there to provide oversight of those charged with oversight? And what is to prevent not only the further deterioration of Congress’s oversight function but also a deeper erosion of faith in government? If there were to be a legitimate exercise of impeachment authority, perhaps it should be reserved for those now so willing to wield it against others.