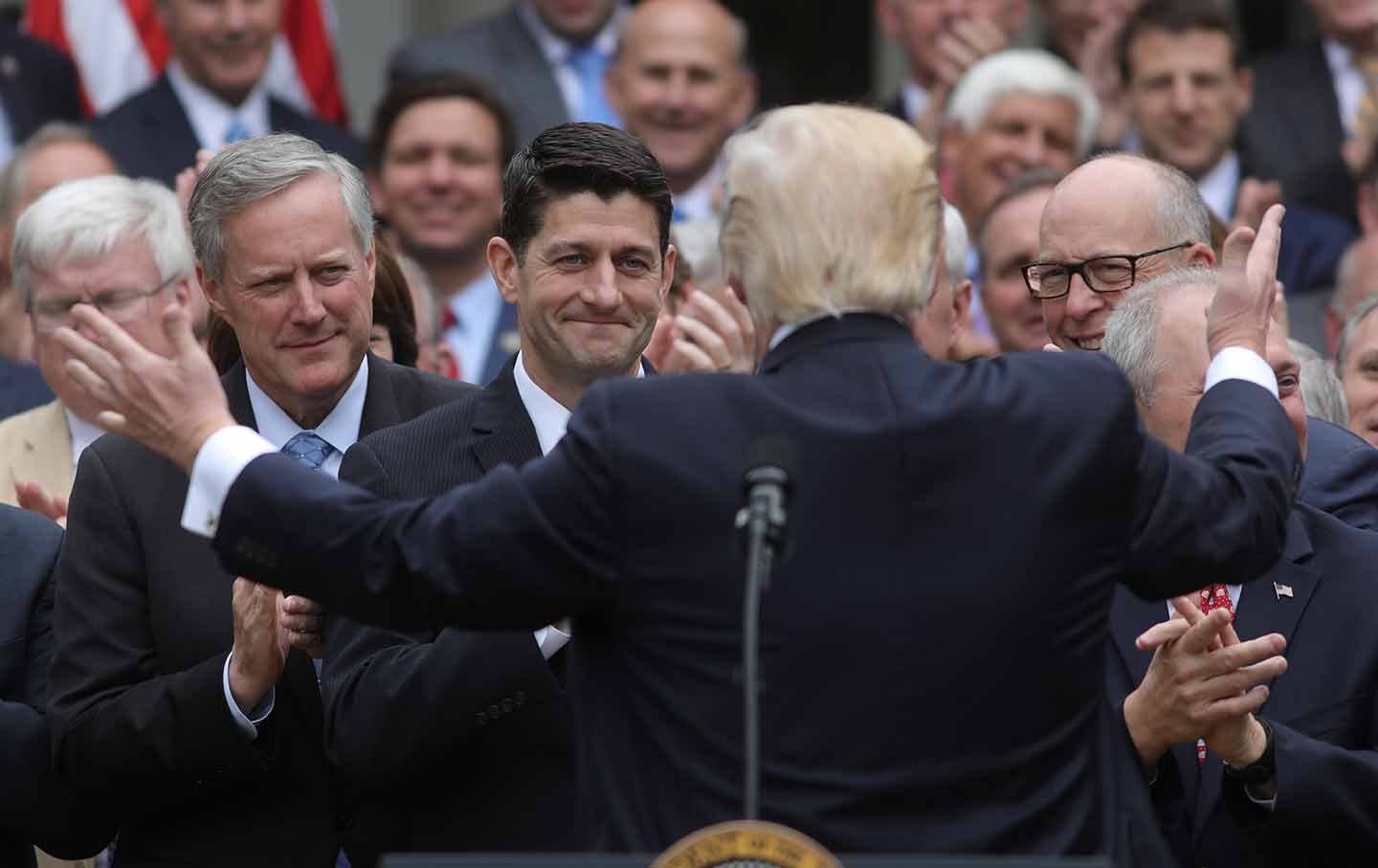 Donald Trump and House Republicans in the Rose Garden of the White House on May 4, 2017. (Reuters / Carlos Barria)

House Republicans will go into work tomorrow and pass a bill designed to strip away virtually everything of value in the last round of President Obama’s 2010 financial reforms. And then everyone will get on with their lives, because the bill has no chance whatsoever of becoming law.

House Financial Services Committee Chair Jeb Hensarling, aficionado of industry-paid junkets, knows this. House Speaker Paul Ryan knows this. Not a soul in Congress believes that the CHOICE (Creating Hope and Opportunity for Investors, Consumers and Entrepreneurs) Act, the House’s Dodd-Frank overhaul, will see the light of day. But they’re passing it anyway.

And that’s the difference between Republican and Democratic conceptions of legislative power.

Let’s start by pointing out that the Choice Act is a bad bill. The acronym of the title suggests banks would have to make a “choice”: suffer under the allegedly burdensome financial regulations we have today, or maintain a ratio of liquid assets to overall debt—known as a “leverage ratio”—of 10 percent. Higher leverage ratios give banks the ability to absorb losses in case of catastrophe. There’s a germ of an idea here; simple requirements like leverage ratios are easier to enforce than the maddening complexity of much of Dodd-Frank. And if bankers are responsible for their own mistakes with their own money, you could imagine a lighter regulatory touch.

But here’s the problem: There’s no penalty for violators of the leverage rules. Under the act, if leverage ratios fell below the threshold for a regulatory exemption, a bank would get a year to rewrite its capital plan. So you could easily envision banks jumping back and forth, reaching compliance with leverage rules and then falling out, facing no sanction for doing so. A rule without enforcement isn’t a rule, and the only choice for Wall Street in the Choice Act is to do whatever it wants.

Added to this false choice is a dismantling of Dodd-Frank’s biggest features. The Consumer Financial Protection Bureau would be gutted, with its jurisdiction constrained and its budget subject to congressional meddling. Tools to unwind banks in a crisis would be repealed. Enhanced supervision of “systemically important” financial institutions would be eliminated. Securities and Exchange Commission (SEC) registration for hedge funds and private equity firms would be jettisoned. Stress-test methods would be publicly disclosed, allowing banks to prepare for these examinations of their balance-sheet health. The Volcker rule, preventing big banks that take deposits from gambling with customer funds, would be ditched.

House Republicans mainly don’t talk about these features, preferring to focus on regulatory relief for community banks and credit unions; the CHOICE Act exempts these institutions from most Dodd-Frank rules and reporting requirements. That’s literally the only thing you hear about from the House GOP, that Dodd-Frank unfairly caused the premature death of Main Street banks (which have been dying for decades amid the same market concentration afflicting the rest of the economy, with Dodd-Frank neither accelerating or decelerating that trend).

Incredibly, Republicans are selling this community bank relief feature as their version of Glass-Steagall. That famous regulation concerned the separation of commercial and investment banking, but in Republican hands, it just means unburdening smaller banks more than the already unburdened mega-banks. They are using the name of one of the history’s prominent bank regulations to sell deregulation. There was an outside shot than an actual Glass-Steagall restoration, sponsored by Democrat Marcy Kaptur and Republican Walter Jones, would get a vote along with the CHOICE Act. But Republicans on the House Rules Committee quickly shot that down, and so Thursday’s vote will just be on the CHOICE Act.

The Senate has a CHOICE Act too: It’s about education scholarships. That’s how much the CHOICE Act is disrespected on the other side of the Capitol, where they have no interest in or ability to pass such an overhaul. Any legislation of this type would need eight Senate Democrats to overcome a filibuster, which is about eight more than this kind of package could attract. The CHOICE Act is purely a framework in theory, and will never exist in practice.

Even the White House, in its statement of support for the CHOICE Act, concluded by writing “the Administration looks forward to working with the Senate on arriving at a final piece of legislation,” admitting that the bill as it is won’t reach the finish line.

So why bother with the CHOICE Act at all? The answer is that Republicans would rather send a message than send a law to the president. In 2009, Democrats tried to pinpoint legislation that could actually pass, and delivered as much as possible. Given the diversity of the Democratic caucus at that time, the results were incremental, but they did actually exist.

Republicans have no interest in bending on principle. The House has spent half a year making the same kinds of messaging votes they did when they knew Barack Obama would veto the finished product. There’s probably a bill out there that would reduce Dodd-Frank rules for community banks (although there’s plenty of tailoring in bank supervision already) that could pass Congress; in fact, here is that bill. But Republicans don’t want to make the choice of getting that done without freeing the big banks as well. So they pass the CHOICE Act, and it falls into the ether, and they can say to their lobbyist pals that they tried.

This is ultimately why congressional Republicans have full legislative control in Washington but no legislative accomplishments. It’s highly unusual for a dominant political party to do nothing with that power. But Republicans in Congress are more interested in making speeches than in making laws. And that cedes the playing field for governing almost entirely to Donald Trump.

In the case of financial regulation, the administration’s goals align with the intentions of the Choice Act. Trump has continually selected a rogue’s gallery of bank executives and corporate lawyers to oversee the industries where they used to work. Just this week, he picked Joseph Otting, the former CEO of OneWest Bank, to run the Office of the Comptroller of the Currency. So both OneWest CEOs in the bank’s ignominious history, Otting and Steve Mnuchin, command top regulatory positions. SEC chair Jay Clayton, former law partner at Sullivan and Cromwell, just hired Steven Peikin, former law partner at Sullivan and Cromwell, to run the agency’s enforcement division.

But this repeal by neglect is temporary by design. A new administration would carry new priorities. Only statutory law can maintain policy continuity. But Republicans don’t want to do the work. Instead they write the Choice Act and other sparkle-pony wishes for industry that have no chance of success, abdicating their lawmaking role. They might as well not exist. And when the current White House occupant has a scattershot relationship to reality, that’s downright dangerous.