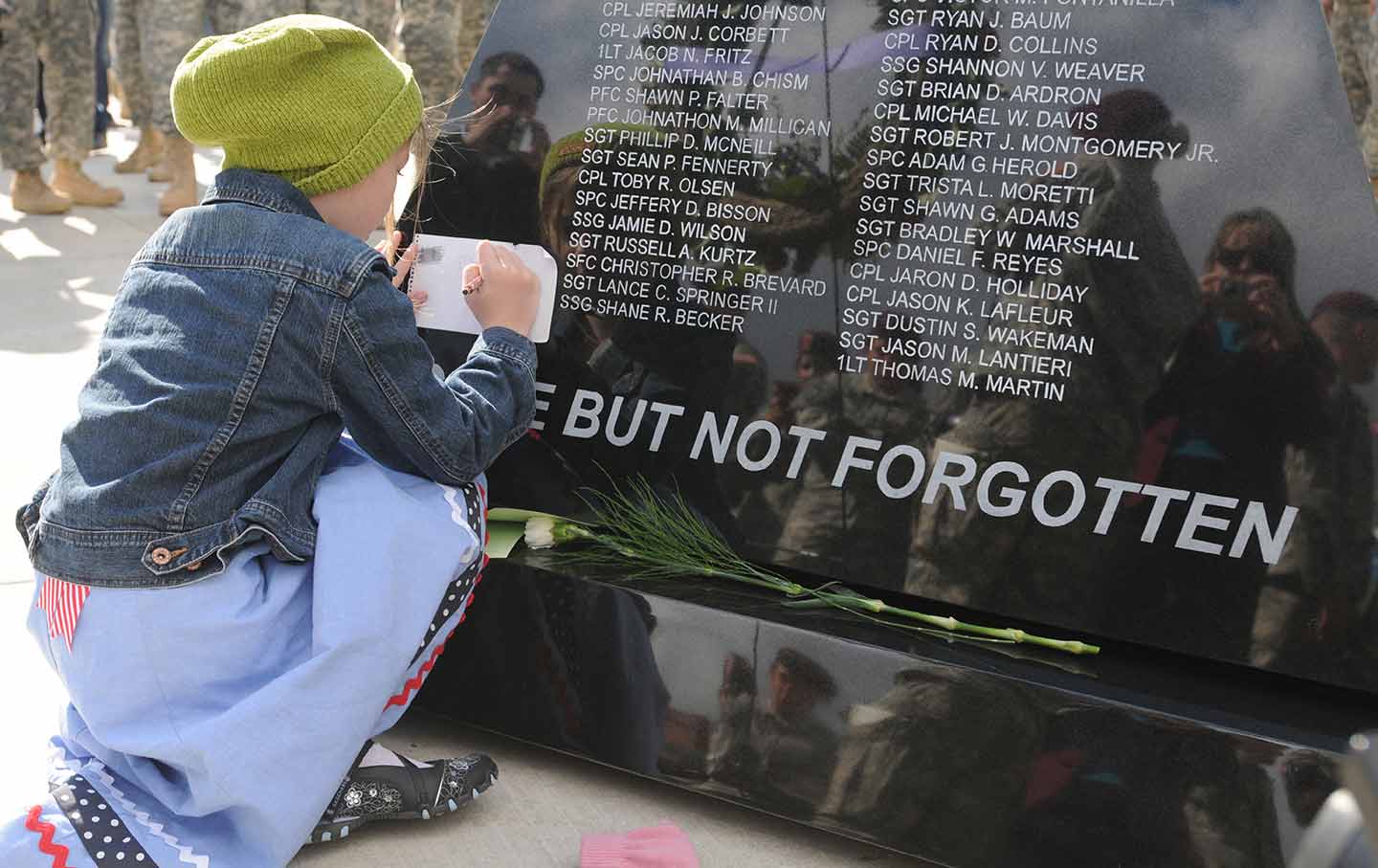 Cierra Becker mourns her late father at the dedication of an Iraq War monument in Alaska, May 2008. (AP Photo / Erik Hill)

About 54 cents of every discretionary dollar in the federal budget goes to the military. And that’s been true for a very long time. Despite his claimed opposition to current wars, President-elect Donald Trump has promised to end limits on Pentagon spending, increase the size of the US military, and even to expand the US nuclear arsenal. Military budgets will likely go up over the next four years, not down.

Now more than ever it is important for us to remember what past wars have cost—all the costs. George W. Bush’s Iraq War continues today, though US military involvement is different and it’s morphed into the “global war on terror.” And the costs continue to rise.

So it was appropriate, indeed necessary, that the Iraq war—its lies and its costs—was the subject of an important tribunal coordinated by the antiwar activist group Code Pink in Washington, DC, in early December.

It’s easier these days to talk about the lies. That part of the war’s origins has become part of the acceptable discourse of mainstream US politics, culture, and history. At the People’s Tribunal on the Iraq War, scores of Iraqi and American witnesses—academics and analysts, US veterans and Iraqi health workers, journalists, diplomats, peace activists, and more—described the sordid chronicle of lies that set the political stage for the 2003 invasion and occupation of Iraq.

Among the witnesses was the heroic Barbara Lee of California, the sole member of Congress to vote against Bush’s Authorization for the Use of Military Force two days after the 9/11 attacks, an authority quickly extended beyond Afghanistan to justify the illegal war in Iraq. Other witnesses included retired colonel Ann Wright, a former ambassador who was the first foreign-service officer to resign her position in protest of the invasion of Iraq. Inder Comar, the plaintiffs’ attorney in Saleh v. Bush, a class-action lawsuit against Bush and other top administration officials, testified about the illegality of the Iraq War, how it constituted a war of aggression.

The roster of witnesses, in person and by video, went on. From military historian Andrew Bacevich to antiwar activist and Iraqi businessman Andy Shallal, from Center for Constitutional Rights director Vince Warren to antiwar poet Sarah Browning, from Pentagon Papers whistle-blower Dan Ellsberg to Jeremy Corbyn, the longtime antiwar activist and leader of Britain’s Labor Party. There was little that was new to most of those watching, yet the parade of four-minute testimonies provided a staggering reminder of the lies that had been asserted, reported, repeated, and left unchallenged except by a brave, initially small, but ultimately majority-reflecting antiwar movement. It was a reminder for history.

That was just day one. Day two turned to the costs. The economic costs, hidden though they were during the early years of the war as the Bush administration paid for their war on unacknowledged credit, are now known, and they are staggering. Between three and six trillion dollars have been spent on the war in Iraq, depending on how one calculates the likely cost of Iraq veteran care. Numerous witnesses, among them scholars from the Institute for Policy Studies, testified to the economic cost of the war and how it continues to distort the US economy.

And that was only on the US side. One of the most important contributions of the tribunal as a tool for protecting historical memory is its reminder of the impact of war where it is actually waged. That meant testimonies on the costs of the war in Iraq—a shattered country facing, even while war continues to rage, the challenge of rebuilding an economy completely destroyed by the war. Longstanding Iraqi partners of Code Pink and other antiwar organizations described the continuing crisis facing their impoverished homeland, where civil-society activists struggle to rebuild the social fabric and institutional infrastructure shredded after decades of crippling sanctions and devastating war.

And the tribunal’s definition of the costs of war expanded beyond economic costs to include the whole range of human, environmental, legal, and other costs, starting with the horrifying accounts of the dead, injured, and orphaned. The tribunal highlighted the costs to Iraqi women, whose social rights before the war were among the most advanced in the Arab world. Speakers also reflected on the destruction of Iraq’s environment from military assaults, the burning of oil fields, and the vast and continuing devastation of Iraq’s rivers, cities, farmland, and antiquities. Others spoke of the erosion of the influence of international law, including the laws of war, as it was violated wholesale by the powerful invading armies and their political leaders, and the enormous resulting price paid by Iraqi civilians, detainees, soldiers, and others. The tribunal also touched on the costs to the families of US troops, so many of whom continue to pay the price of their loved ones’ return from an unjust war with deep mental and emotional disabilities as well as serious physical injuries.

There was also, crucially, testimony about the powerful global movement against the US war that rose even before the war began and continued for years beyond. The mobilization of February 15, 2003, when 14 million people marched in more than 800 cities around the world, shouting the same words, “the world says no to war,” in a hundred languages, remains the symbolic core of that movement. And while that movement was unable to prevent the war against Iraq, it did show the world how a new kind of global movement could arise, and it is one of the reasons that the United States did not go to war with Iran in 2007 and beyond.

Perhaps the most important contribution of the tribunal—to history but also to the struggles of today—is that reminds the world of what comes with war. As Dr. Martin Luther King Jr. reminds us, “a nation that continues year after year to spend more money on military defense than on programs of social uplift is approaching spiritual death.” The People’s Tribunal on Iraq is part of the effort to reverse that inevitable course.

And beyond those direct human, economic, environmental, and other costs, we must also remember how that war created the conditions for the brutal wars that continue to rage in Iraq and across its borders to Syria, Yemen, Libya, and beyond. The People’s Tribunal will remain a crucial weapon against forgetting—it is for history. And preventing future wars depends on remembering that.