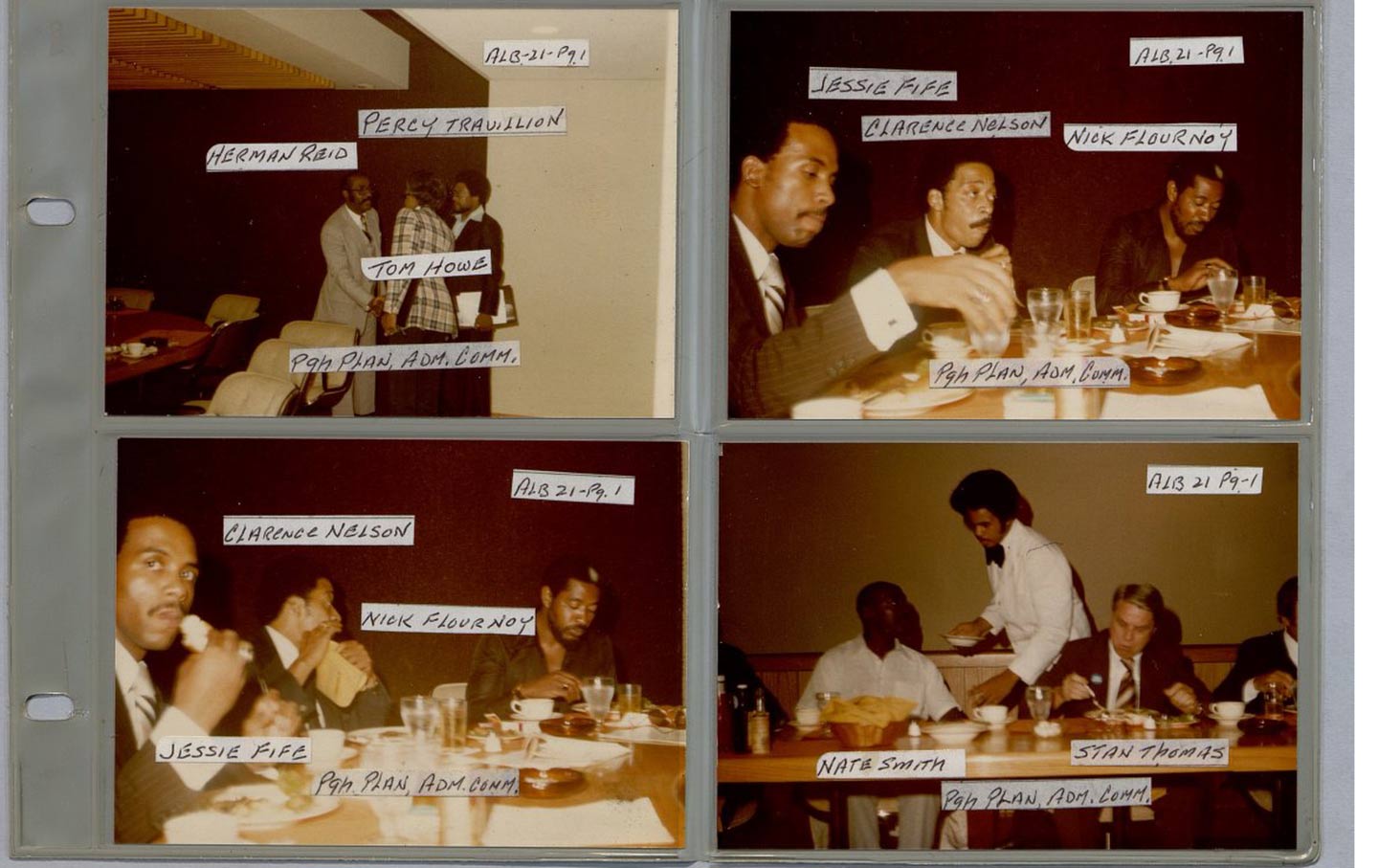 Photographs taken between 1957 and 1960 of African-American construction workers meeting in Pittsburgh. (Courtesy of Historic Pittsburgh / University of Pittsburgh)

As the birthplace of both the precursor to the American Federation of Labor and the Congress of Industrial Organizations, now the AFL-CIO, Pittsburgh, Pennsylvania, is sometimes remembered as the cradle of the American labor movement. But even unions can foster inequity, and did, a fact that is crucial to remember as a new generation of workers embrace unions. On May Day, a day to remember labor history, Nate Smith’s struggle for equality among union workers in Pittsburgh is a reminder: Organizers like Smith had to break entrenched, protected barriers before workers could achieve what they have today—and which we must also do for the future. Smith’s ingenuity, persistence, and unflinching demand for the integrity of all workers is the sort of spirit that should propel this work. —Eds.

In the years after World War II, Pittsburgh, Pennsylvania, made drastic changes to its built environment in an attempt to move beyond its designation as the “Smoky City,” a name earned by the city’s thick smog and industrial pollution. Contentious urban renewal displaced thousands of black people in favor of commercial development, while ambitious construction projects contributed to Pittsburgh’s now-iconic downtown skyline.

In the midst of this growth, Pittsburgh native Nate Smith saw major inequity. Ninety-eight percent of Pittsburgh’s 30,000 union construction workers were white, preventing black laborers in Pittsburgh from sharing in the benefits of the city’s first construction boom. Construction unions, at the time, were almost impossible to break into without family ties; pervasive racism did the rest. When community members protested the lack of black representation in construction, union bosses said that though they wanted to hire qualified black workers, they couldn’t find anyone skilled enough.

Smith was such a rarity in the city: a black man who knew how to operate heavy machinery. He had run away to join the Navy at age 12, serving in World War II on a heavy cruiser in the Pacific until he was discovered to be underage and honorably discharged. He had learned competitive fighting in the Navy and made a living as a prizefighter when he returned to Pittsburgh. When he was chosen as an alternate in the World Heavyweight Competition hosted in Pittsburgh, he traded union officials four admission tickets for a union card with the Union of Operating Engineers, becoming its first black member. He learned to operate any machine necessary.

After union bosses claimed they couldn’t find qualified black workers, Smith started training people himself through Operation Dig, a program he created to boost black- and women-workers’ eligibility for union membership by teaching them the skills they’d need—and that he could pass on—to work in construction. He mortgaged his house to rent equipment for trainings. In Smith’s 2011 obituary, the Pittsburgh Post-Gazette quoted retired steamfitter William “Cuddles” Miller, who spoke about the impact of Smith’s life’s work. “He opened up doors,” Miller said. “It’s because of him that so many of us made it. So many of us, because of Nate, were able to make a good living.” It’s estimated that Operation Dig is responsible for enabling thousands of racial minorities and women to join trade unions in Pittsburgh.

Smith, as part of the Black Construction Coalition that he helped found, led hundreds of people through the streets of Downtown Pittsburgh in 1969 to protest the exclusion of black laborers from union construction projects. Among the many other protests and actions he led, Smith is best known for lying down in front of a moving bulldozer at the Three Rivers Stadium construction site, forcing a work stoppage. “Defying them to roll over him. Shutting down a job,” Tim Stevens, chairman of Pittsburgh’s Black Political Empowerment Project, told local NPR-station WESA. “That’s some serious commitment. Nate was a no-nonsense person, and he wanted to get this deal done.”

“He put his life on the line for many people. Back in that day, you didn’t play around with unions. Many times I was afraid to start the car because I feared it would blow up,” said Minnie Smith, his wife of over 60 years. Smith was shot in the leg during a drive-by shooting and a frequent target of death threats. His son was doused with gasoline and set on fire at a baseball game.

Following the 1969 protests, Smith helped negotiate the Pittsburgh Plan, an agreement in which employers and unions agreed to hire 1,250 black workers over the next four years. Through both the 1970 Pittsburgh Plan and Operation Dig, his work led to the inclusion of thousands of black workers in the city’s building trades. The Pittsburgh Plan became a national model for cities trying to integrate their workforces.

Smith later taught himself to read and, at age 75, achieved his lifelong dream of earning a high-school degree when Westinghouse High School awarded him an honorary diploma. “I have a philosophy,” Smith once said. “‘Don’t nothing happen if you don’t make it happen.’ I’m going to make it happen.”